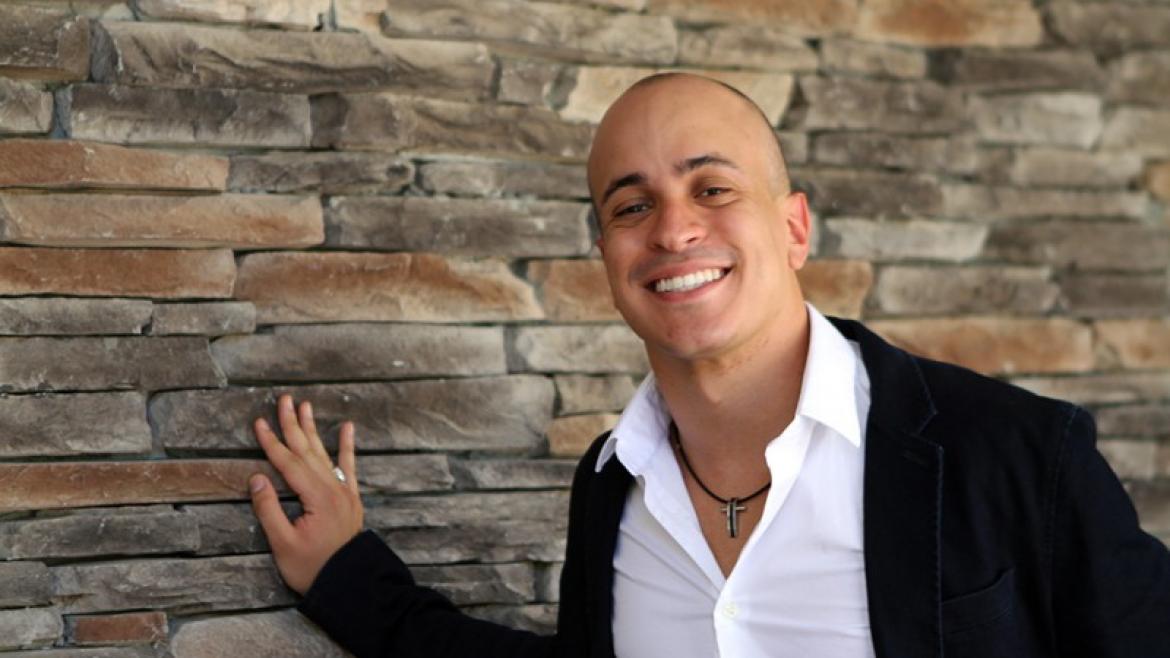 Like many students at Arizona State University, Carlos Melendez came from another continent to earn his degree, but his journey crossed an ocean of red tape that was so deep it almost swallowed him.

Victimized by the political turmoil in his home country of Venezuela, Melendez went from living a comfortable lifestyle to barely having enough money to eat.

At his wit’s end and unable to pay his tuition, Melendez started a crowd-sourcing campaign to raise money.

Thanks to a combination of hard work, luck and the generosity of the community at ASU's Thunderbird School of Global Management, Melendez will be able to graduate on Friday.

“It’s great because the story has a happy ending because I’m getting my degree and nobody can take that away from me,” he said.

“And the cherry on top will be that my parents will here to see it.”

Melendez grew up in Maracaibo, Venezuela, a city on the South American nation's northern coast, along the Caribbean sea. It's where his father owned a law firm and where Melendez attended a private American school.

He graduated from law school, intending to practice international law. But over the past several years, Melendez and his family saw alarming changes in their country.

“Everything is controlled by the government. You have to be in the political party of the government to get a job in international law. I ended up going into criminal law, which I didn’t like that much.”

In early 2014, protests around the country intensified over the people's discontent with inflation and shortages of daily goods. Violent clashes with government-backed forces resulted in the deaths of more than 40 people.

“My parents told me, ‘You better leave. The country is getting worse.’”

Melendez wanted to follow his passion of global studies and researched universities abroad. He chose Thunderbird, and not only because of the school’s reputation.

“Venezuela has a strict exchange control. You can’t freely buy dollars. All your money exchanges are controlled by the government. In order to come here and study, I needed to choose a course of study they would approve. There was nothing law-related but they did have international business.”

That was in mid-2014, when Thunderbird was in negotiations to become part of Arizona State University.

“I thought, OK, I’m not only going to get all the positive things at Thunderbird but I’m going to get an authentic American college experience too.”

Melendez received all the approvals he needed from the Venezuelan and American governments, and proved to the U.S. that his bank account held more than enough money to cover his tuition and expenses. He also received a scholarship from Thunderbird.

He arrived at the Glendale campus in July 2014.

“The sunsets, the hiking, I loved it,” he said. “One of the things I love about being in Arizona is that you can walk. In Venezuela, if you walk you can get mugged. You’re always locked indoors.”

But a month after his classes started, Melendez received an email from the Venezuelan government that would turn his world upside down.

“One month in, the government sends me an email saying that my course of studies are not essential to the revolution and the central bank won’t be selling currency to students abroad."
— Carlos Melendez, Venezuelan native and Thunderbird grad

After his death in 2013, anti-government protests increased over concerns about inflation, high crime rates, corruption and censorship. The turmoil reached all the way to Melendez in Arizona.

“One month in, the government sends me an email saying that my course of studies are not essential to the revolution and the central bank won’t be selling currency to students abroad.

“It was my money. They tell you you can’t take it out.”

Melendez had two options: appeal or acquire the dollars he needed on the black market.

His mother moved from Maracaibo to the capital of Caracas to work on his appeal.

At that time, the official exchange rate was 6.5 bolivar fuertes for every American dollar. On the black market, it was 70 to 1.

Melendez was able to complete his fall semester but ran out of money in December. He got a student job on campus, capped at 10 hours a week, and, with the help of some friends, made it through the spring semester — though he still owed some tuition.

During that time, Thunderbird was in the process of merging operations with ASU, which added to the confusion over his situation.

“A lot of people at Thunderbird were working really hard on connecting that bridge to ASU for me,” he said.

Melendez got a prestigious internship last summer with the Cincinnati Reds baseball team, but his precarious situation affected that as well. Because he still owed some tuition, he was unable to officially register for the internship class, which meant he had leave the team before the summer ended.

As the fall semester approached, his situation was dire.

“I knew I couldn’t pay for school. I was about one week away from the start of classes and as an international student, if you’re not enrolled by the end of the first week of classes, you lose your visa and you could be sent back.”

The Venezuelan government had rejected his appeal and the black market exchange rate had ballooned to 700 to 1. With a student visa, he was unable to work anywhere except on campus.

“I go through the first week of classes not enrolled, just visiting. I’m trying to explain to the professors why I couldn’t access the course work.

“That weekend it was a do or die situation.”

Melendez had resisted the idea of crowd funding but felt he had no choice. In August, he started a “gofundme” campaign.

He plays on Thunderbird’s rugby team, and started there.

Next, he told a handful of friends in Miami and at Thunderbird.

“With that, it multiplied,” he said.

“It was mostly alumni, but I got professors donating. The people from the copy center donated. It’s unbelievable."

“Muchos gracias amigos,” he wrote on the Facebook page.

The Thunderbird alumni have a reputation for being supportive.

“Carlos is a remarkable young man who has excelled in the classroom, been a leader among his peers, and who has displayed extreme resourcefulness not only to get to Thunderbird in the first place but to stay here and finish his degree,” said Allen Morrison, CEO and director general of Thunderbird.

“That our Thunderbird community came together to support him speaks volumes about not only Carlos, but the entire Thunderbird alumni network.

“Our culture is collaborative and Carlos is not alone in having to overcome struggles and disadvantages to achieve his goal. T-birds rally to support one another and this is another extraordinary example of that spirit.” 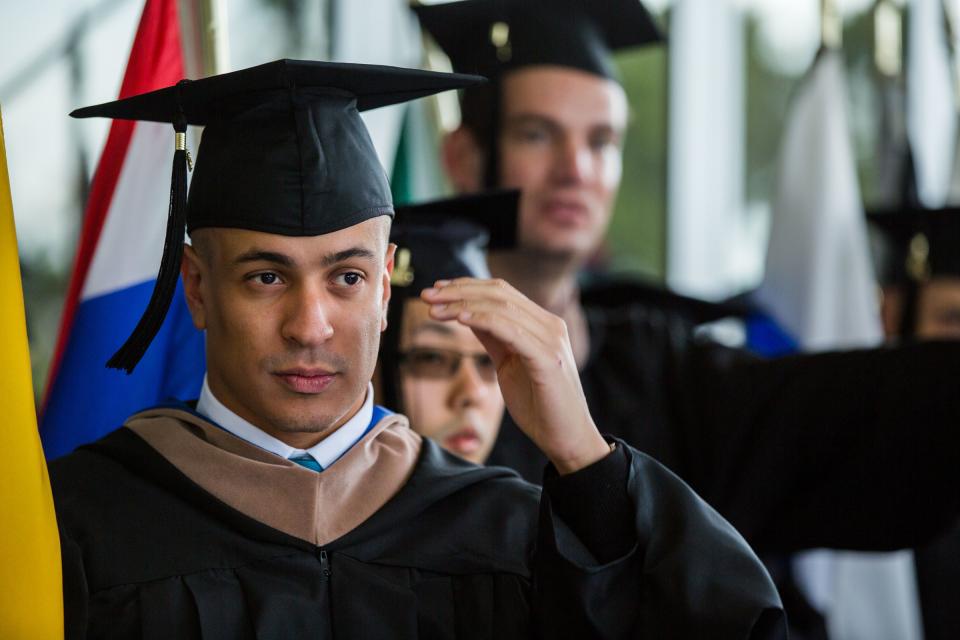 The donations didn’t cover everything. But Melendez's parents sold their apartment in Maracaibo in U.S. dollars and were able to help him out.

Melendez is especially upset over the distress this situation has caused his parents.

The Venezuelan government has restricted travel by capping the amount of money its nationals can spend internationally, but his parents managed to come to Arizona to see him walk in commencement.

Even with graduation, Melendez’s struggles with red tape aren’t over. His passport expired when the Venezuelan consulate wouldn’t give him a renewal appointment, and he had to travel to New York last week to deal with that.

After earning his master of science in global managment, he is hoping to work for the year he has left on his student visa, and then get a permanent job in the United States.

“It’s been a roller-coaster ride, but I’m just so grateful for everyone here at Thunderbird.”

Norovirus, the gastrointestinal sickness that causes severe discomfort, has stricken 200 people at a Seattle holiday party and is suspected in the illnesses of 80 in Boston, according to news reports.But don't dismiss it as mere food poisoning.The effects of norovirus are more far-reaching and can wield enormous economic damage from shutting down buildings to knocking employees out of work and eve... It is norovirus season, here is what you need to know.
Norovirus outbreaks on the coasts? Do you need to be worried?
December 8, 2015

Norovirus, the gastrointestinal sickness that causes severe discomfort, has stricken 200 people at a Seattle holiday party and is suspected in the illnesses of 80 in Boston, according to news reports.

But don't dismiss it as mere food poisoning.

The effects of norovirus are more far-reaching and can wield enormous economic damage from shutting down buildings to knocking employees out of work and even closing schools, according to Charles Arntzen. The Arizona State University biologist knows the virus well; he develops new medicines and new ways to deliver them and has been chasing a norovirus vaccine for years.

Question: There are all sorts of foodborne illnesses. Why focus on norovirus for a vaccine?

Answer: It is the dominant disease in terms of economic cost to society. People are out of work, you have to close down an office building in Seattle. It is common for schools to have to close down. Houston recently had to close a couple of schools. Hospitals close down wings. It is a disruptive disease.

Q: While some may think this is simply a “stomach bug,” there are big public health implications, right?

A: The science interest in the norovirus is that it keeps mutating. So we get exposed to it one year and we may get sick again the next year because a new strain has evolved. It is entirely possible that the strain in Seattle is the new dominant strain that will circulate this winter.

Q: What does the Seattle incident tell us about the norovirus?

A: It is the time of year. We have norovirus all year around but it kicks into high gear in late fall and especially through the winter months. People are indoors, more people are in one area so it easily spreads. The outbreaks almost always come from some contaminated food. It spreads from person to person very quickly but it’s initiated usually from food. It causes 48 hours of extreme gastrointestinal distress and then you get over it.

What caught everyone off guard was so many people got infected. So whatever initiated this was a pretty contaminated food source that everyone was consuming. It re-emphasizes that food safety issues this time of year need to be observed very carefully.

Q: You are working on a norovirus vaccine?

A: We’ve been working on a vaccine for the last 12 years. We have been trying to get it into human clinical trials. To get into that stage, I need something in excess of $5 million in funding and I’ve never been able to raise that.

The secret to a good vaccine is in the formulation and how it is presented. Will it be injectable or will it be oral? We favor the oral vaccine route. There eventually will be an oral virus vaccine. The uncertainty is, will it be mandated? How much demand will there be because it is not life threatening to most people? It may be hard to commercialize. 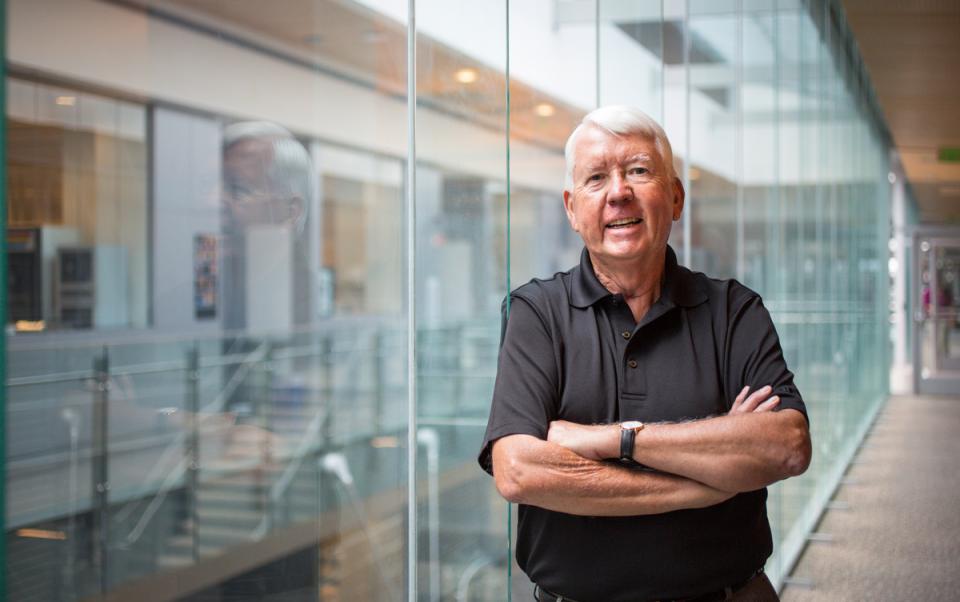