A planet discovered last year sitting at an unusually large distance from its star — 16 times farther than Pluto is from the sun — may have been kicked out of its birthplace close to the star in a process similar to what may have happened early in our own solar system’s history.

Images from the Gemini Planet Imager (GPI) in the Chilean Andes and the Hubble Space Telescope show that the star has a lopsided comet belt indicative of a very disturbed solar system, and hinting that the planet interactions that roiled the comets closer to the star might have sent the exoplanet into exile as well.

The planet may even have a ring of debris it dragged along with it when it was expelled.

“The measurements we made on the planet suggest it may be dustier than comparison objects, and we are making follow-up observations to check if the planet is really encircled by a disk — an exciting possibility,” said Abhijith Rajan, a graduate student at Arizona State University’s School of Earth and Space Exploration who analyzed the planet’s images.

“We think that the planet itself could have captured material from the comet belt, and that the planet is surrounded by a large dust ring or dust shroud,” said Paul Kalas, an adjunct professor of astronomy at UC Berkeley and lead author of a paper about the results, published by The Astrophysical Journal on Nov. 20.

Such planets are of interest because in its youth, our own solar system may have had planets that were kicked out of the local neighborhood and are no longer among the eight planets we see today.

“Is this a picture of our solar system when it was 13 million years old?” Kalas asked. “We know that our own belt of comets, the Kuiper belt, lost a large fraction of its mass as it evolved, but we don’t have a time machine to go back and see how it was decimated. One of the ways, though, is to study these violent episodes of gravitational disturbance around other young stars that kick out many objects, including planets.” 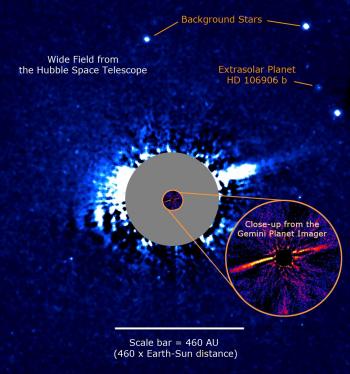 Two direct images of the cometary dust and exoplanet surrounding the young star HD 106906. The wider field in blue shows Hubble Space Telescope data where the star’s blinding light is artificially eclipsed (gray circular mask). The point to the upper right is an 11-Jupiter-mass planet located more than 650 times the distance from the Earth to the sun. A new discovery in these Hubble observations is an extremely asymmetric nebulosity indicating a dynamically disturbed system of comets. Surprisingly, the planet is located 21 degrees above the plane of the nebulosity. The circular orange inset shows a region much closer to the star that can only be detected using advanced adaptive optics from the ground-based Gemini Observatory. Using the Gemini Planet Imager (GPI), researchers found a narrow loop of nebulosity suggesting that a planetary system formed close to the star, but somehow the architecture of the outer regions is severely disrupted. The investigators also find that the planet HD 106906 b may have a dusty ring system of its own, motivating future work with Hubble and ground-based astronomical observatories. Image by Paul Kalas/UC Berkeley Download Full Image

The new observations may have recorded this type of disk disruption around a younger star.

“Studying the planets and disks around young stars is a way to investigate the processes that impacted the formation and evolution of our solar system” says Jennifer Patience, associate professor at ASU's School of Earth and Space Exploration who co-led the development of the target sample for the survey.

The disturbance could have been caused by a passing star that perturbed the inner planets, or a second massive planet in the system. The GPI team also looked for another large planet closer to the star that may have interacted with the exoplanet, but found nothing outside a Uranus-size orbit.

Kalas and Rajan will discuss the observations during a Google+ Hangout on air at 10 a.m. Arizona time Dec. 1 during Extreme Solar Systems III, the third in a series of international meetings on exoplanets that this year takes place on the 20 anniversary of the discovery of the first exoplanet in 1995. Viewers without Google+ accounts may participate via YouTube.

The star, HD 106906, is located 300 light-years away in the direction of the constellation Crux and is similar to the sun, but much younger: about 13 million years old, compared with our sun’s 4.5 billion years. Planets are thought to form early in a star's history, however, and in 2014 a team led by Vanessa Bailey at the University of Arizona discovered a planet HD 106906 b around the star weighing a hefty 11 times Jupiter’s mass and located in the star’s distant suburbs, an astounding 650 AU from the star (one AU is the average distance between Earth and the sun, or 93 million miles).

Planets were not thought to form so far from their star and its surrounding protoplanetary disk, so some suggested that the planet formed much like a star, by condensing from its own swirling cloud of gas and dust. The GPI and Hubble discovery of a lopsided comet belt and possible ring around the planet points instead to a normal formation within the debris disk around the star, but a violent episode that forced it into a more distant orbit.

Kalas and a multi-institutional team using GPI first targeted the star in search of other planets in May 2015 and discovered that it was surrounded by a ring of dusty material very close to the size of our own solar system’s Kuiper Belt. The emptiness of the central region — an area about 50 AU in radius, slightly larger than the region occupied by planets in our solar system — indicates that a planetary system has formed there, Kalas said.

“These discoveries suggest that the entire planetary system has been recently jostled by an unknown perturbation to its current asymmetric state,” he said. The planet is also unusual in that its orbit is possibly tilted 21 degrees away from the plane of the inner planetary system, whereas most planets typically lie close to a common plane.

Kalas and collaborators hypothesized that the planet may have originated from a position closer to the comet belt and may have captured dusty material that still orbits the planet. To test the hypothesis, they carefully analyzed the GPI and Hubble observations, revealing three properties about the planet consistent with a large dusty ring or shroud surrounding it. However, for each of the three properties, alternate explanations are possible.

The investigators will be pursuing more sensitive observations with the Hubble Space Telescope to determine whether HD 106906b is in fact one of the first exoplanets that resembles Saturn and its ring system.

The inner belt of dust around the star has been confirmed by an independent team using the planet-finding instrument SPHERE on the European Southern Observatory’s Very Large Telescope in Chile. The lopsided nature of the debris disk was not evident, however, until Kalas called up archival images from Hubble’s Advanced Camera for Surveys.

The GPI Exoplanet Survey, operated by a team of astronomers at UC Berkeley and 23 other institutions, is targeting 600 young stars, all less than approximately 100 million years old, to understand how planetary systems evolve over time and what planetary dynamics could shape the final arrangement of planets like we see in our solar system today.

Among Kalas’ coauthors are associate professor Jennifer Patience and graduate student Abhijith Rajan of the School of Earth and Space Exploration, a unit of ASU’s College of Liberal Arts and Sciences. The research was supported by the NSF and NASA’s Nexus for Exoplanet System Science (NExSS) research coordination network sponsored by NASA’s Science Mission Directorate.

ProPublica reporter Heather Vogell shared how she exposed the shocking ways children with intellectual disabilities are physically disciplined in schools as she accepted top honors on Monday in the nation’s only journalism contest dedicated to disability coverage.Vogell received first place in the Katherine Schneider Journalism Award for Excellence in Reporting on Disability contest administered...

ProPublica reporter Heather Vogell shared how she exposed the shocking ways children with intellectual disabilities are physically disciplined in schools as she accepted top honors on Monday in the nation’s only journalism contest dedicated to disability coverage.

Vogell received first place in the Katherine Schneider Journalism Award for Excellence in Reporting on Disability contest administered by the National Center on Disability and Journalism at Arizona State University's Walter Cronkite School of Journalism and Mass Communication. 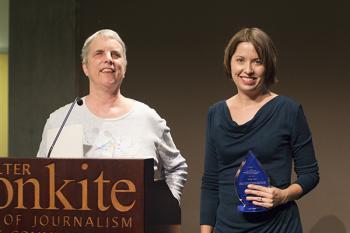 She accepted the award and a $5,000 cash prize on behalf of ProPublica at the Cronkite School, where she discussed her winning story “Violent and Legal: The Shocking Ways School Kids Are Being Pinned Down, Isolated Against Their Will.”

Vogell’s story profiled Carson Luke, a young boy with autism, who sustained broken bones after educators grabbed him and tried to force him into a “scream room.” Her in-depth reporting and data analysis uncovered that children across the country faced similar harm at least 267,000 times in 2012.

“Every story from every family is just heartbreaking,” said Vogell, who discussed her piece with Tim McGuire, the Frank Russell Chair for the Business of Journalism at the Cronkite School. “I’m a parent with two kids, and some of these parents didn’t even know these things were happening.”

“Violent and Legal” underscored the common practice of educators secluding and physically restraining uncooperative children, sometimes with straps, handcuffs, bungee cords and even duct tape, documenting hundreds of thousands of cases a year. The piece was one of more than a dozen stories produced by Vogell and Annie Waldman that examined seclusion and restraint practices in schools.

The Schneider Award contest also had second-place and honorable-mention winners. Josh Kovner, a reporter at the Hartford Courant in Connecticut, took second for “Saving Evan: A Mother and Son Navigate the Challenges of Treating Autism.” Radio producer Eric Mennel received an honorable mention for a North Carolina public radio story, “Why Some NC Sterilization Victims Won't Get Share of $10 Million Fund.”

The annual journalism contest was created under a grant from Schneider, a retired clinical psychologist who has been blind since birth and who also supports the national Schneider Family Book Awards.

“This is the (award contest’s) third year and all of the stories have been exceptional,” said Schneider, who presented Vogell with her first-place award.

Past winners have included Dan Barry of The New York Times and Ryan Gabrielson of California Watch, part of the Center for Investigative Reporting. In the past three years, the contest has received more than 200 entries from leading journalism organizations across the country, said Kristin Gilger, Cronkite associate dean and director of the National Center on Disability and Journalism.

“Too often disability coverage can be superficial,” Gilger said. “Too often it can be inaccurate or offensive. The Schneider Award seeks to change all of that by recognizing the reporters who get it right and call attention to their work.”

The National Center on Disability and Journalism has been at the Cronkite School on ASU’s Downtown Phoenix campus since 2009. It is led by an advisory board consisting of award-winning media professionals and disability experts. The organization works to provide support and guidance to journalists as they cover people with disabilities.