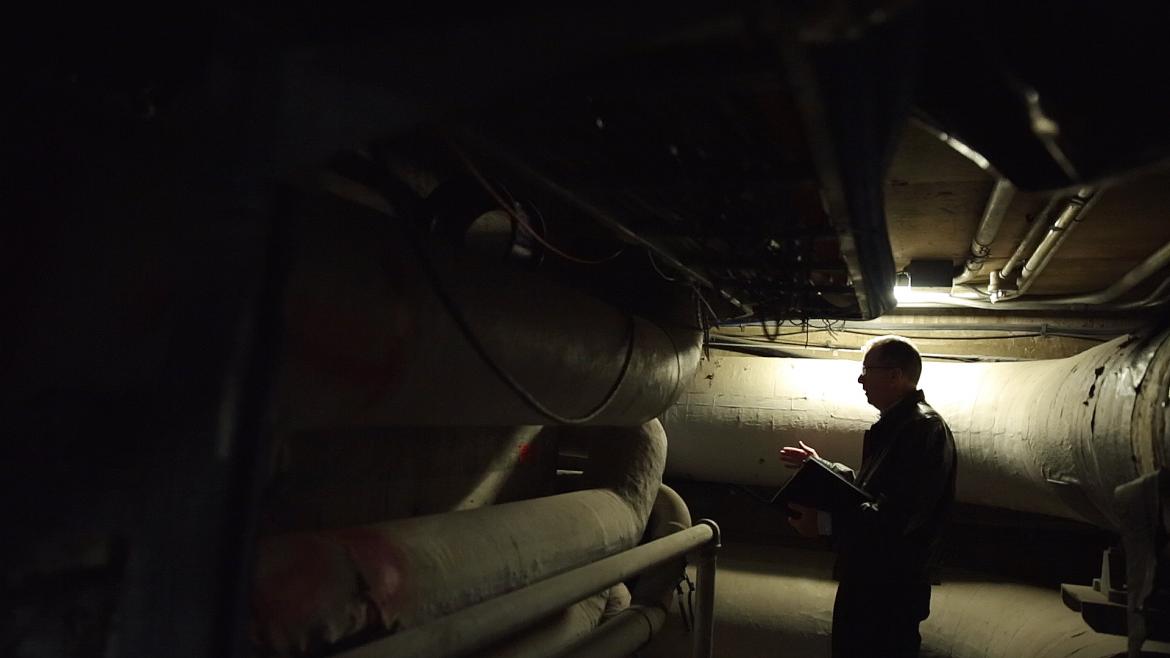 Tempe campus
And under ASU is ... a series of cool tunnels.
ASU secret #325: There are tunnels stretching under the university.
November 23, 2015

If you’ve ever wondered why locked plastic boxes guard thermostats in some of the classrooms on Arizona State University’s Tempe campus, there’s an easy answer: Management doesn’t want you to use them to adjust the temperature.

The answer to that answer is a little more complicated, and harder to find. But there it is, 10 to 15 feet underground and inside the five, 80-year-old concrete tunnels that shoot out from the center of the campus under the Central Plant.

Yes, to the surprise of many, ASU has its own tunnel system — one that measures five miles long and stretches from Sun Devil Stadium to Apache Boulevard.

Running along the subterranean walls are industrial-grade pipes, which funnel steam throughout the campus. The steam provides heat to the school’s buildings, but it’s a very sensitive system, according to Pretzman.

“If you change the temperature in one classroom, it is likely to set off a domino effect to the other classrooms in the building,” he said.

Which is why they don’t want people adjusting the thermostats to make the day a little warmer, or colder.

“They’re mostly only adjusted by facilities management personnel, which they can do in person or remotely.”

You could say the same about the tunnels, which are a restricted space where unauthorized personnel are not allowed. And while you might hear that about various places on campus, the tunnels really are someplace you don’t want to sneak into for the fun of it.

Pressure monitors and motion sensors are in place along the corridors to alert employees of the exact location of an intruder.

“We try to discourage students from coming down here to explore,” Pretzman said. “Once they’re down here they usually discover pretty quickly that it’s not a place they want to be.”

And it’s not just because trespassers are turned over to the police. 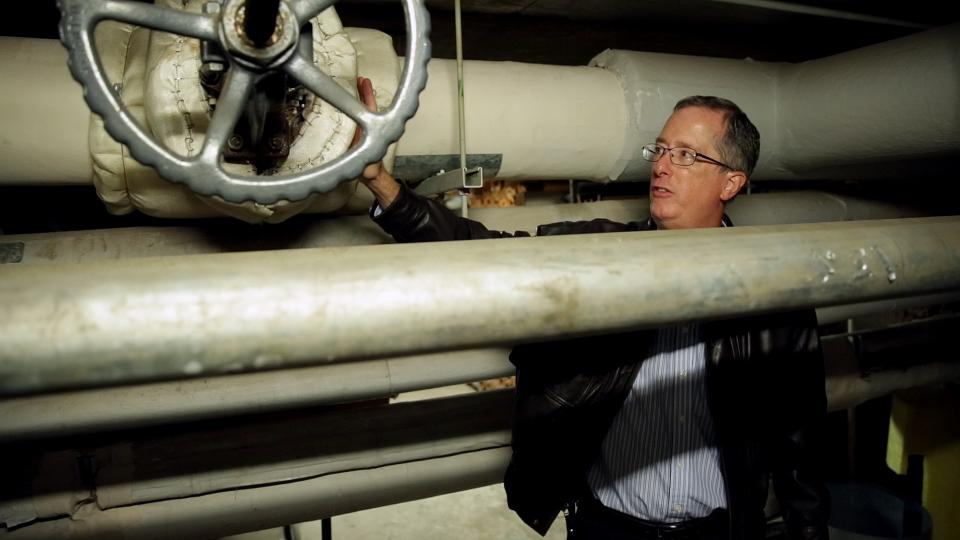 Rick Pretzman, a facilities management director for ASU, explains the pipe setup at the entrance of the tunnels underneath the university. Photos by Kenneth Fagan/ASU Now

Inside the passageways are hazardous materials and dangerous machinery — not to mention scalding steam and hot pipes. Because of these factors, everyone who enters the tunnels is required to wear proper equipment, including a respirator. (The ASU Now video crew went only so far as the entrance to the tunnels.)

Such conditions require proper maintenance and upkeep, which is why the tunnels and Central Plant undergo thousands of maintenance procedures each year to fix everything from leaking pipes to faulty wiring.

“We have operators walking the perimeter of the Central Plant at least once an hour to check for anything that might be wrong,” said Pretzman.

Up above at the Central Plant the environment has the feel of a factory. A maze of pipes and valves stretch across the expanse of the interior, leaving little headroom but a lot to see.

“We use more power at night to take advantage of the lower rates,” Pretzman said, referring to energy used by the plant to regulate building temperatures and provide them with electricity.

“Ninety percent of the cooling and heating for the Tempe campus comes from the Central Plant,” Pretzman said. “We also supply the power for 20 to 30 of the buildings. The entire plant requires people working on it around the clock to keep it running, and the workload is broken up between three shifts of employees.”

The electricity the plant provides comes from the Arizona Public Service Co. (APS); then the Central Plant distributes it throughout campus via the tunnel network.

“Because the Central Plant’s power supply comes from APS, we do lose power when they do, typically during bad storms,” said Pretzman. “But there is a spot on campus where we produce our own power with natural gas: the Combined Heat and Power plant, which isn’t affected by bad weather.”

Interesting, but perhaps not as mystifying or fascinating as these secret tunnels under the Tempe campus.

“We don’t try to keep it a secret, but we also don’t advertise ourselves,” Pretzman said. “The reason being is only facilities management personnel need to be down there, plus the steam and power lines can hurt people."

Discovering what makes us tick

On paper, Candance Lewis seems to have it all — including a Bisgrove fellowship and a Fulbright scholarship. And having successfully defended her dissertation in June, she can now add “Dr.” to her title. All at only 28 years old.But the two-time Arizona State University alumnus — Lewis earned both her master’s and her doctorate through the Department of Psychology’s behavioral neurosci... 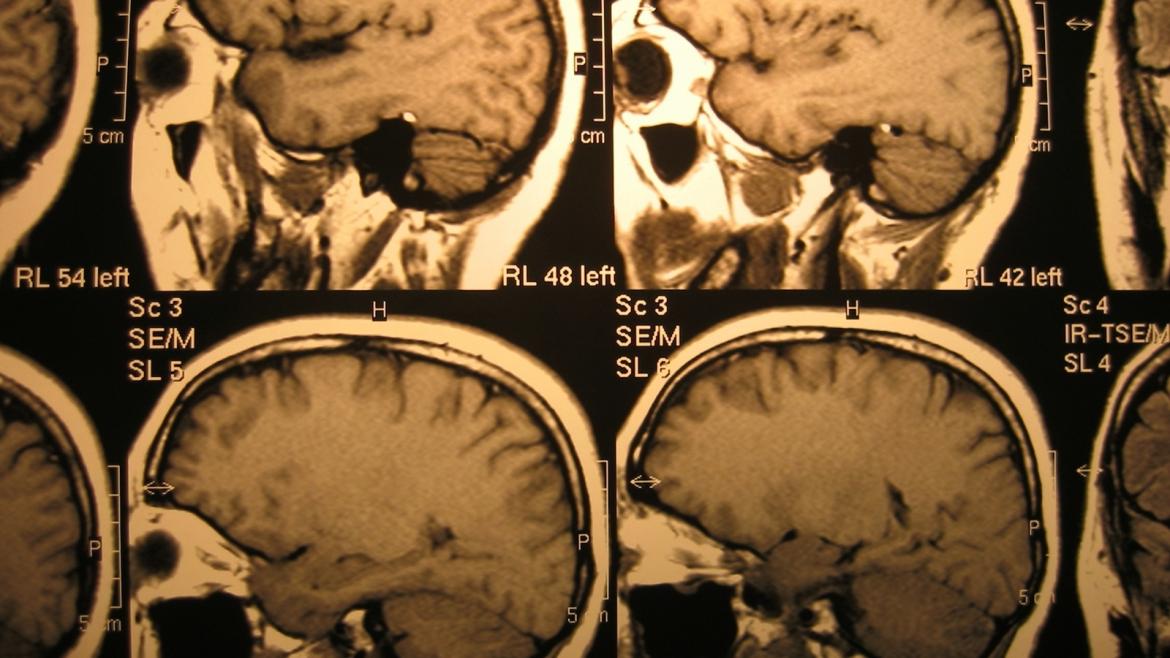 Discovering what makes us tick

Tempe campus
At 28 ASU alum Candace Lewis is both a Bisgrove Scholar and a Fulbright Scholar.
ASU alum's "sole driving force" is to bring relief to the mentally ill.
November 24, 2015

On paper, Candance Lewis seems to have it all — including a Bisgrove fellowship and a Fulbright scholarship. And having successfully defended her dissertation in June, she can now add “Dr.” to her title. All at only 28 years old.

But the two-time Arizona State University alumnus — Lewis earned both her master’s and her doctorate through the Department of Psychology’s behavioral neuroscience program — wants other students to know that “every step along the way was peppered with self-doubt, failures and heartache.”

The child of a mentally ill parent, Lewis experienced what she calls a disadvantaged childhood. That experience ultimately stoked her desire to understand the factors that shape who we are, and to help those who suffer from abnormalities associated with them. 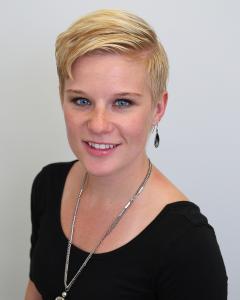 After receiving her bachelor’s in psychology from the University of Alaska Anchorage, Lewis (pictured left) left her native state for the “innovative biomedical research environment” in Phoenix.

Lewis’ Bisgrove post-doctoral fellowship will be carried out as a joint appointment with ASU’s Department of Psychology and the Translational Genomics Research Institute (TGen).

“I am thrilled the Bisgrove fellowship allows me to continue my training in this community,” she said.

Specifically, she will be combining state-of-the-art genetic research at TGen with an ASU-faculty-ledThe study will be led by Kathryn Lemery-Chalfant and Leah Doane, professors in ASU’s Department of Psychology. twin study that aims to determine how both genetics and environment affect childhood health and cognitive outcomes.

“I am ecstatic for the opportunity to receive training from Dr. HuentelmanMatthew Huentelman serves as an adjunct faculty member in ASU’s School of Life Sciences, as well as an investigator in the neurogenomics division at TGen. at TGen, an internationally renowned genetics research center on the cutting edge of translational research. I am astonished and humbled by my team of mentors and their expertise. I could not ask for a better post-doctoral experience as measured by my mentors and the extensive and diverse training I will receive,” she added.

For her Fulbright Scholarship, Lewis will be researching the effects of psilocybin, the psychoactive component of “magic mushrooms,” as a treatment option for depression and anxiety disorders.

Read on for a fascinating glimpse inside the mind of a dedicated scientist.

Question: What initially sparked your interest in the relationship between genetics and behavior?

Answer: I am a child of a mentally ill parent and experienced a disadvantaged childhood. These experiences led to an intense curiosity concerning if the sum total of a person is more a product of their biologically inherited genes or of their collective experiences throughout life. This is commonly referred to as the nature vs. nurture debate. This is not only a philosophical question, but is quite pertinent to understanding the etiologyEtiology is the cause of a disease or abnormal condition. of psychiatric illnesses.

To further obscure the answer, research shows the cause of most psychiatric illness has both a genetic and environmental component. I am ecstatic to be an emerging researcher during a time I can investigate the interaction between genetics and environment.

Q: What do you hope to learn from studying that relationship?

A: Both fields are crucial to understanding the human condition, but my interest lies in the intersection of how experiences have the ability to alter genetic expression that in turn influences behavioral and physiological systems implicated in mental health.

Q: What was your reaction upon finding out you had been awarded both a Bisgrove award and a Fulbright Scholarship?

A: Silent and still astonishment followed by deep gratitude and misty eyes.

Q: How is your Bisgrove post-doctoral research on twins unique?

A: This type of work, in the field of epigeneticsEpigenetics is the study of heritable changes in gene function that do not involve changes in DNA sequence., is nothing short of a paradigm switch. Instead of wondering whether genes or experiences assert greater influence over one’s health, we can now measure how biologically inherited genetics and experiences in our environment interact with each other to influence health-related biological systems and behavior. This area of research may lead to novel behavioral and pharmaceutical treatments for various psychiatric conditions.

Q: Why is your Fulbright Scholarship research especially timely?

A: Current treatment options for major depressive disorder and anxiety-related disorders are dismal. This research seeks to understand if psilocybin-assisted therapy may produce drastically better outcomes for certain patient populations. Recently, top research universities such as UCLA and NYU have published promising preliminary results demonstrating long-lasting antidepressant effects from one psilocybin-assisted therapy session. While this may seem a controversial technique, to me it is not, because the patient outcome is what truly matters. Ultimately, I chose this career to use neuroscience as a tool to help improve the quality of life for people who are suffering.

Q: How do your Bisgrove research and your Fulbright research compare?

A: On the surface, they seem vastly different but at the core they are related. Our understanding and treatment of mental illness has virtually been at a standstill for decades. Both of my projects use modern techniques, such as neuroimaging and second-generation genetic sequencing, in conjunction with novel approaches and ideas about how we can conceptualize and treat mental illness.

Q: What do you hope to accomplish through your research?

A: My sole driving force to conduct research in this field is to bring relief to those suffering.

Q: Any advice for students struggling to find success in their field?

A: I want younger students to know that every step along the way was peppered with self-doubt, failures and heartache. One must find a support system and keep trying when the academic road becomes treacherous. Always remember that every “no” you receive is an opportunity to find a better “yes” somewhere else.

The Department of Psychology is part of ASU's College of Liberal Arts and Sciences.