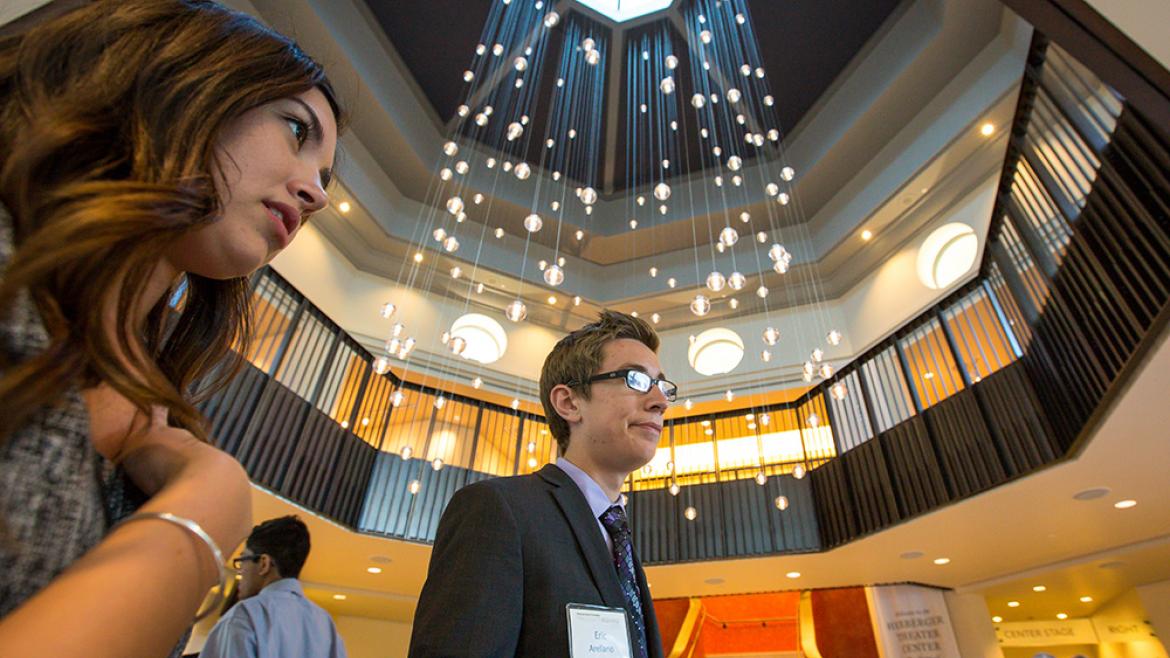 Year One: Life at ASU — Eric gets into service

When Eric Arellano came to Tempe from Tucson, the ASU freshman's goal was to work with people and help them attain success — whether it was in the small villages of Ecuador or communities in the Valley.

Although he has changed majors, his goal of helping people has remained. It's why Arellano is a member of the Barrett honors community and the Public Service Academy’s Next Generation Service Corps. That involvement has allowed the Barrett scholar to interact with local business leaders and even ASU's President Michael Crow. But although Arellano is committed to his goals, he also knows there's room to relax and have fun, like getting yogurt with a pack of friends all wearing pajamas. 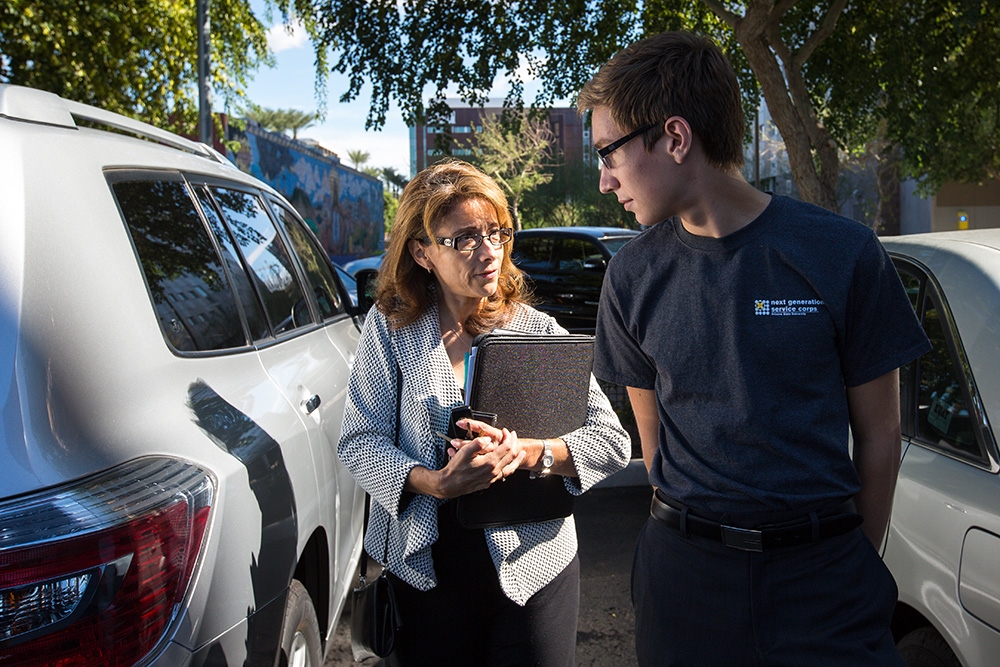 Eric Arellano escorts Pima Community College's Stella Perez from the parking lot to the Leaders Luncheon, part of the Oct. 31 Opportunity Fair and Forum at the Cronkite building in downtown Phoenix. Arellano is part of the Public Service Academy's Next Generation Service Corps, which prepares students committed to service who want to be catalysts of change in their careers. 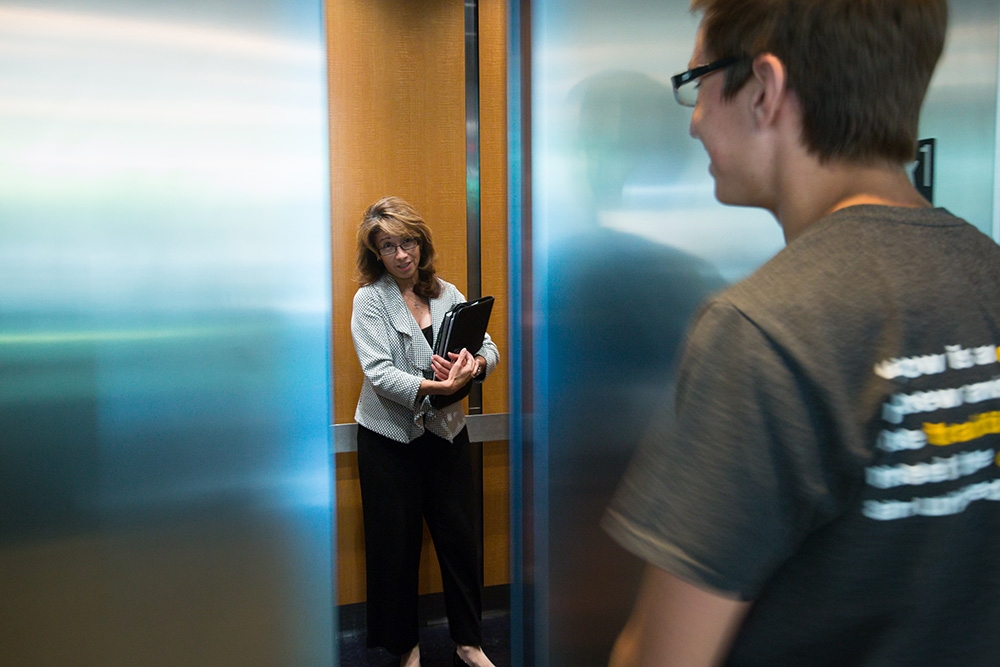 Arellano listens to the last words of Stella Perez as the elevator takes her to the Luncheon. She is the Pima Community College's vice chancellor of operations. 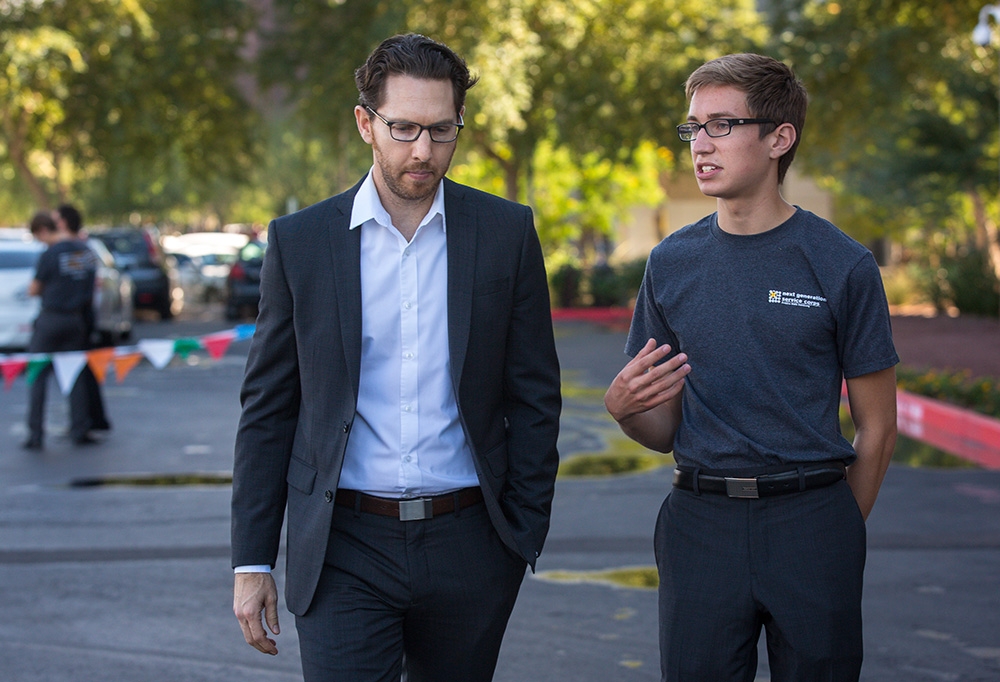 Sam Alpert (left) listens to Arellano as they walk to the Leaders Luncheon on Oct. 30 on the downtown Phoenix campus. Alpert is the senior vice president of business development at Junior Achievement of Arizona. 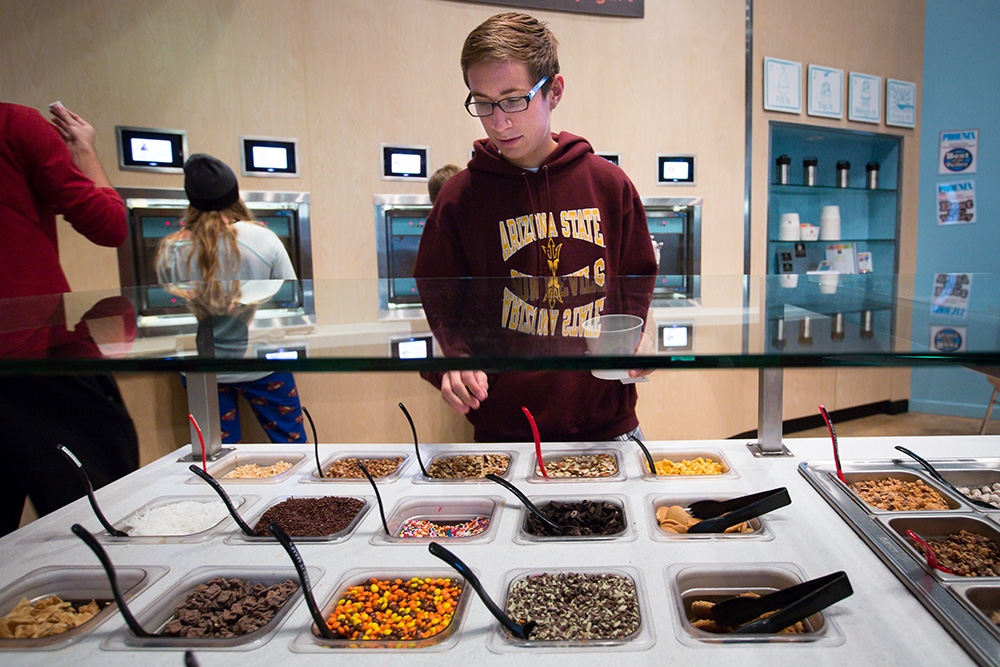 During a break in studying the following week, Arellano selects some toppings for his late-night snack at the Zoyo Neighborhood Yogurt shop on Nov. 4. He and a bunch of friends go there in their pajamas on Wednesdays. 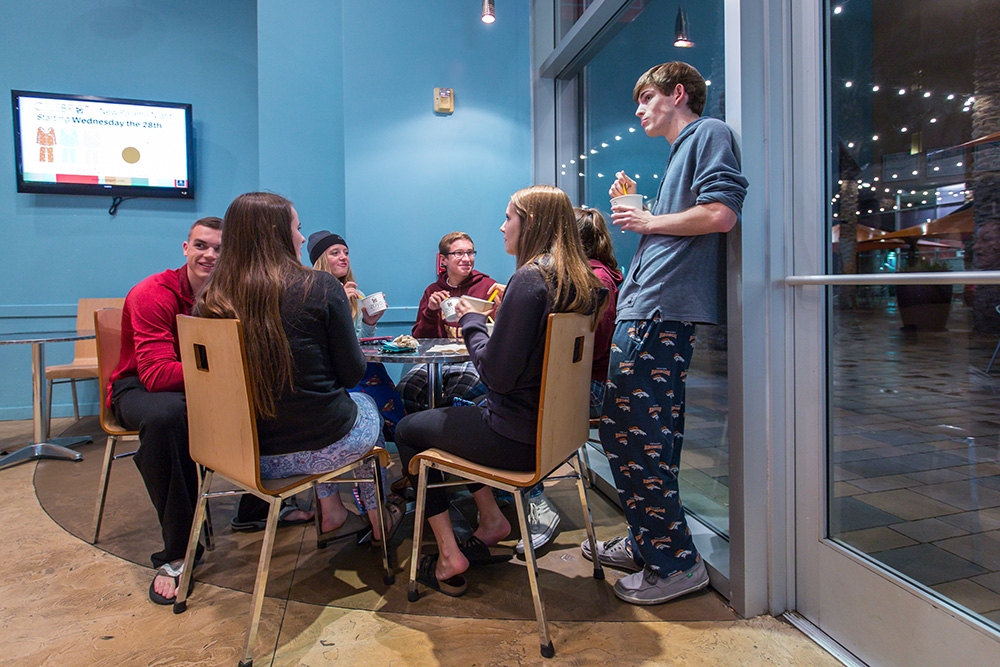 Arellano (center) and six friends from the Barrett residence halls congregate with their late-night snack at the Zoyo Neighborhood Yogurt shop. After the half-hour break, they'll head back to the books. 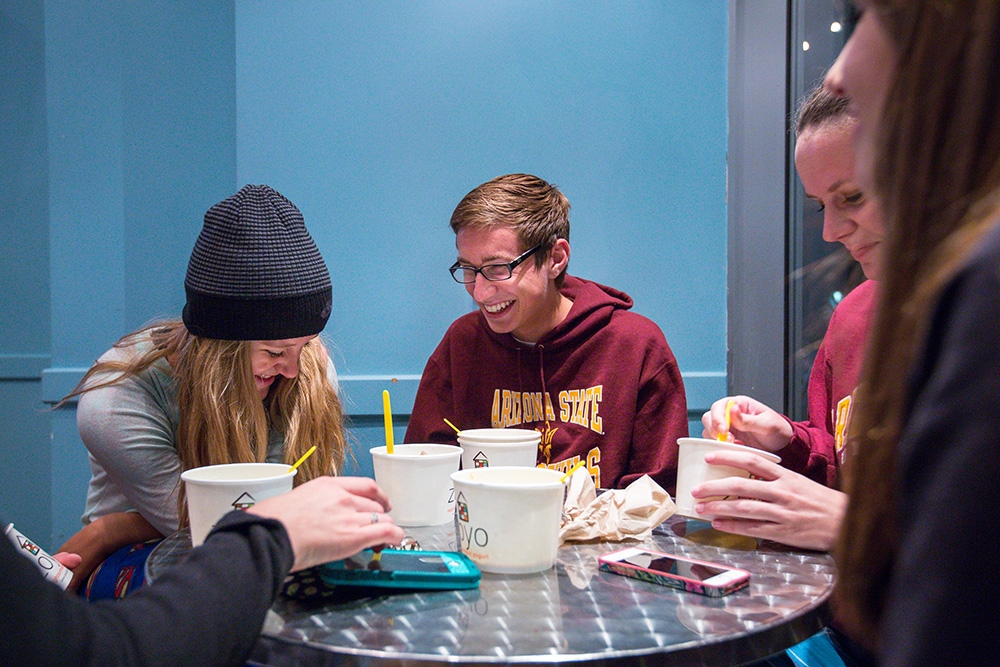 Mia Armstrong and Arellano crack up as they and fellow freshmen from the Barrett community congregate for their late-night snack at the Zoyo Neighborhood Yogurt shop across the street from their dorms. Mia is in global studies, and Arellano is majoring in computer science. 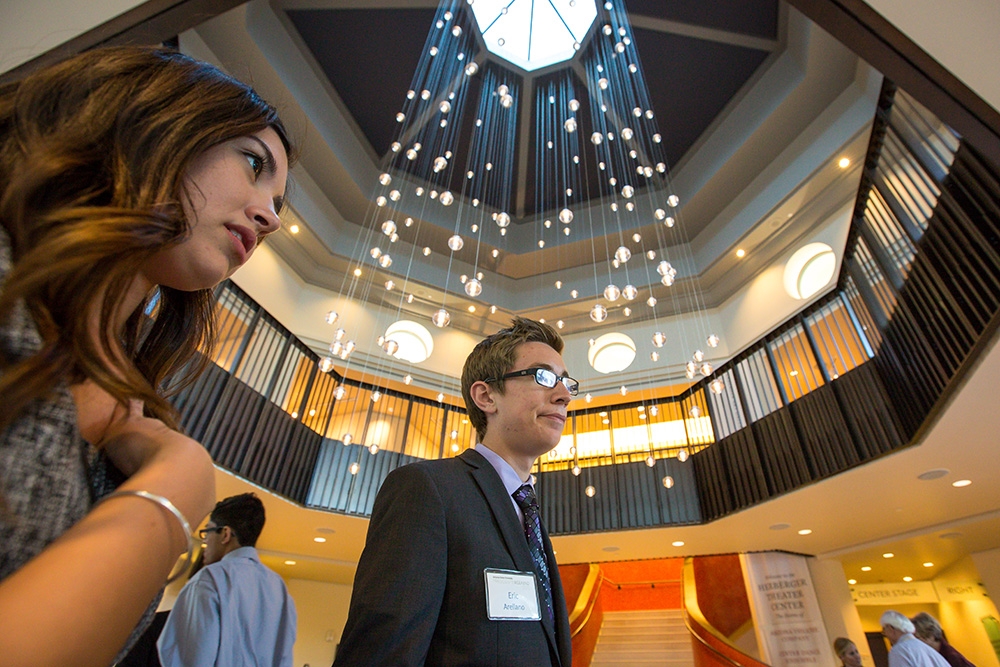 Arellano and fellow freshman and Barrett scholar Breanna Carpenter wait for others to arrive at the President's Club reception at the Herberger Theater Center on Nov. 6. Eric and other Next Generation Service Corps members were invited to attend a dinner for financial and intellectual supporters of ASU who promote it as model of the New American University. 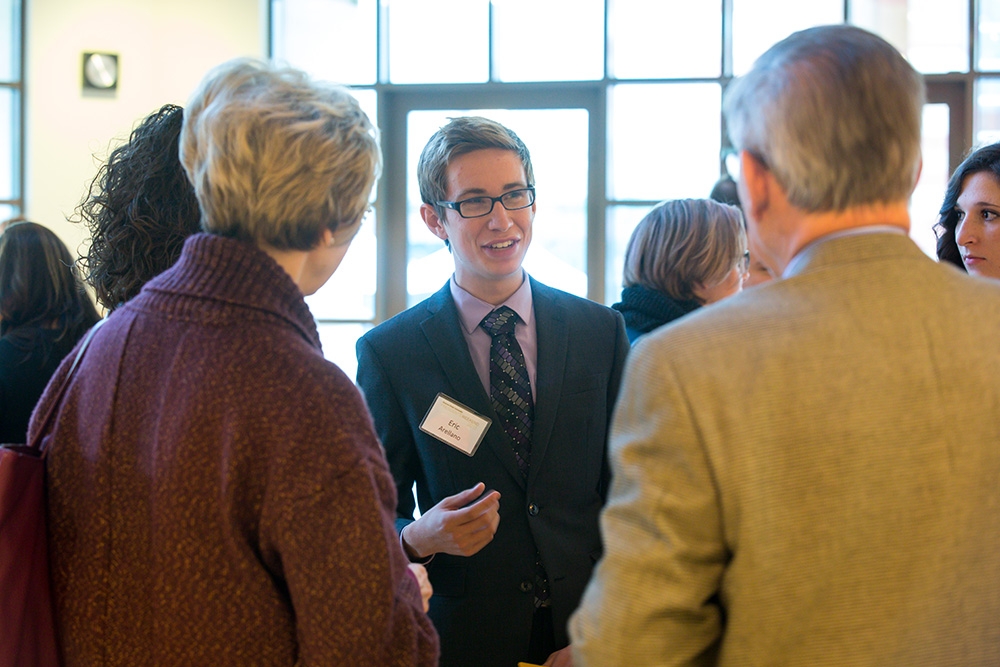 Arellano converses with members of the President's Club reception at the Herberger Theater Center on Nov. 6 in downtown Phoenix. 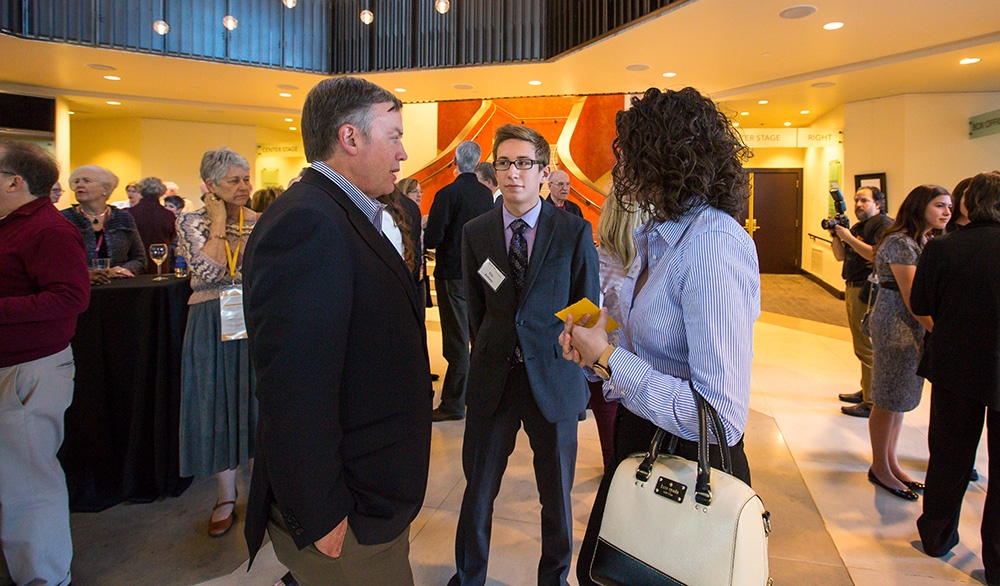 ASU President Michael Crow is impressed with some of the Next Generation Service Corps members, such as Arellano and Abigail Reed, at the President's Club reception at the Herberger Theater Center on Nov. 6.

These interactions are the latest in Arellano's life at ASU. He is part of "Year One: Life at ASU," a periodic photo series that follows five freshmen navigating their way through their first year at ASU.

See what Eric was up to earlier in the semester in these past galleries:

Year one: Life at ASU — Eric collaborates, for humanity

Year one: Life at ASU — Eric shifts his focus

Year one: Life at ASU — Moving into the dorms

'Los Diablos' on the radio

Immersion is key to learning a second language, and the best way to achieve that is by living in a place where that language is predominantly spoken. That's not always an option, however, with time and money constraints. Fortunately, raising the stakes associated with speaking a language can be just as effective.That is precisely what “Spanish 494 – Spanish Language Radio: Analysis and Practic... 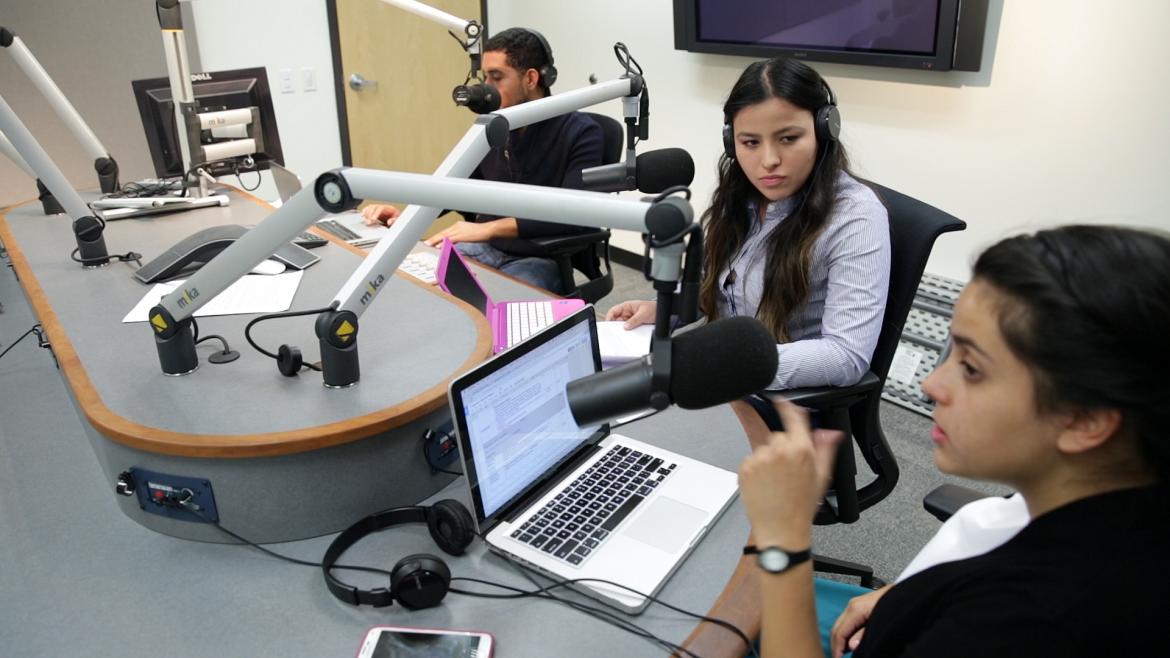 'Los Diablos' on the radio

Immersion is key to learning a second language, and the best way to achieve that is by living in a place where that language is predominantly spoken. That's not always an option, however, with time and money constraints. Fortunately, raising the stakes associated with speaking a language can be just as effective.

That is precisely what “Spanish 494 – Spanish Language Radio: Analysis and Practice” does for students at Arizona State University.

Offered through the College of Letters and Sciences since fall 2014, Spanish 494 gives students the opportunity to gain real-world experience in researching, writing and producing a live Spanish radio show.

The show, called Los Diablos Radio, is broadcast via The Blaze, the Walter Cronkite School of Journalism and Mass Communication’s student-run radio station. It highlights music, community events and other themes of interest pertaining to Hispanics in the United States.

“The course helps [students] with their confidence in speaking, as well as their presentation skills. It really teaches them critical thinking skills, especially how to express themselves in Spanish,” said Barbara Lafford, faculty head of Language and Cultures for the college and director of the Spanish for the Professions program.

The course was originally developed by Carmen King de Ramirez, former coordinator of the program.

Open to students from any major, the course can be used as part of a minor or a certificate in Spanish for the Professions. Past students of the course, for example, have been majors in criminology, interdisciplinary studies and journalism.

Biochemistry senior Abdi Lopez is taking the course as part of her minor in Spanish for the Professions. For her, speaking Spanish well is a cultural necessity.

“It’s of utmost importance to have the ability to present my ideas fluently in my native language. I want to communicate effectively with the community that has made me who I am,” she said.

And though Spanish is not the most predominantly spoken language in the U.S., Hispanics constitute the fastest-growing segment of the country’s population — in Arizona, they make up 30 percent of the state’s population and 41 percent of the population of PhoenixAccording to the 2012 U.S. Census report..

A native of Bolivia, course instructor Nelson SuarezNelson Suarez is a lecturer in the College of Letters and Sciences at Arizona State University. said the course is “very challenging but also really interesting.”

“[The students] love shaping the program and reaching out to the Hispanic community … bringing out cultural differences, and deciding how to integrate them,” Suarez said.

Over the course of the fall 2015 semester, Suarez’s students produced three broadcasts for Los Diablos Radio. For each one, they spent about four weeks preparing by delegating such tasks as researching and brainstorming topics, securing and interviewing guests, and even choosing the music.

One of the broadcasts focused on success stories of Hispanic peoples and featured an interview with the group of students from Carl Hayden High School who made national news when they beat out Massachusetts Institute of Technology and other colleges to win a national robotics competition — their story was made into the documentary film “Underwater Dreams.”

Broadcast junior Maria Berelleza said she relishes the chance to interview people from the local Hispanic community whom she admires, even if that feeling of nervousness and excitement before each live broadcast never goes away.

“I have learned so much from this class,” she said, both from her fellow students and from professionals in her field.

But the biggest reward has been learning the language itself.

“Learning any other language is important,” said Berelleza. “It helps you everywhere you go.”

This class is just one example of how language can be used for a specific purpose. ASU’s College of Letters and Sciences faculty have been taking a leadership role in the international “Language for Specific Purposes” academic community and are hosting the next international symposium at the Downtown Phoenix campus, March 17-19, 2016.