The recognition, given by the Milken Family Foundation, goes to early- to mid-career education professionals for outstanding achievements and for showing promise for the future, and includes a $25,000 award. Recipients are selected based on nominations from state departments of education, each of which appoints a nominating committee assigned to review criteria and make recommendations. 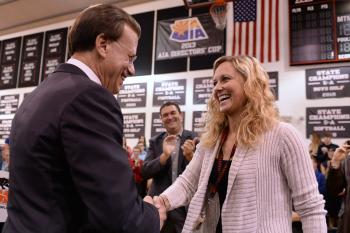 After Derryberry’s first year of teaching in Mesa, 100 percent of her students passed the Career and Technical Bioscience state exam, scoring higher than every other school in the district, and 15 percent higher than students the previous year. More than 95 percent of them passed the AIMS science assessment and 62 percent exceeded the standard.

Derryberry (pictured at right) weaves creativity and passion for science into every lesson and venture at Red Mountain High School. She captivates students with her classroom setup in which they work at stations and take responsibility for equipment and materials. Derryberry developed a “Mystery of the missing mountain lion” lesson in which students collected DNA, analyzed footprints, and drew conclusions based on evidence.

Her career began in the Chandler Unified School District where she was a student intern and teacher, then became an instructional science specialist. In Chandler, Derryberry started VEX Robotics (a curriculum providing concrete, contextualized lessons that integrate math, programming and engineering activities). She provided guidance on the district science fair, which led to their students receiving more than 25 percent of the Arizona Science and Engineering Fair awards, and many progressing to the prestigious Intel International Science and Engineering Fair. She co-directed a $350,000 Math and Science Partnership grant through the U.S. Department of Education that provided training and resources to science teachers in grades 6-8.

Dedicated to nurturing careers in science, Derryberry is a member of and volunteer for the American Institute of Astronautics and Aeronautics in curriculum development and outreach. She is a member of the national and state science teachers associations   and serves as a biotechnology team leader and representative for her school’s improvement committee.

Currently in her second year with Mesa Public Schools, she is the advanced STEM coordinator and a biotechnology teacher for grades 9-12. 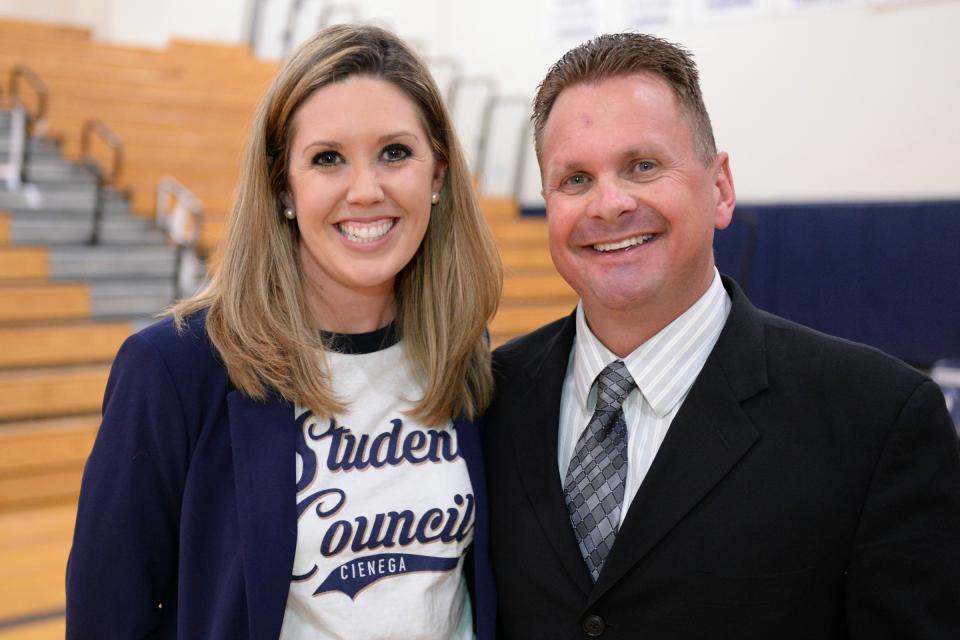 She inspires students to achieve using higher-order questioning techniques, and engaging content. She coordinates a HALAMA (Historical/Literary/Movie Analysis) project in which students apply reading, research, analysis and presentation skills as they study a real-life hero of their choice and analyze that person’s life.

One of her talents is the ability to identify students’ strengths and areas of need. She makes time after school to help them academically, and her connection extends to extra-curricular activities. Matsushino has a leadership position with the student council for the second year. She coordinates events and takes enthusiasm and morale to new levels. Student council members put their trust in her to apply real-life solutions to council problems and teach them to make business decisions.

Matsushino is a cognitive coach and mentor to her peers, providing crucial guidance to new teachers as they acclimate to the school culture. Consistently seeking opportunities to improve the campus, she is the voice of teachers on the school’s site council, which shapes school rules and policies.

Her commitment to excellence extends beyond the district through her role as a coordinator for the district’s Beyond Textbooks (BT) instructional program. She provides professional development on teaching and learning frameworks in this program. The district’s BT partners include more than 100 school districts and charter schools across Arizona, California, Idaho and Wyoming.

A detective and his dog keep ASU safe

Most people really love their pets, but few bonds are as intense as the one between Parker Dunwoody and his Labrador retriever, Disney.Dunwoody, a detective in the Arizona State University Police Department, handles Disney, who is the department’s explosives-detection canine. That means the two trained together, work together and live together.But it goes beyond that. Disney is a food-reward dog... 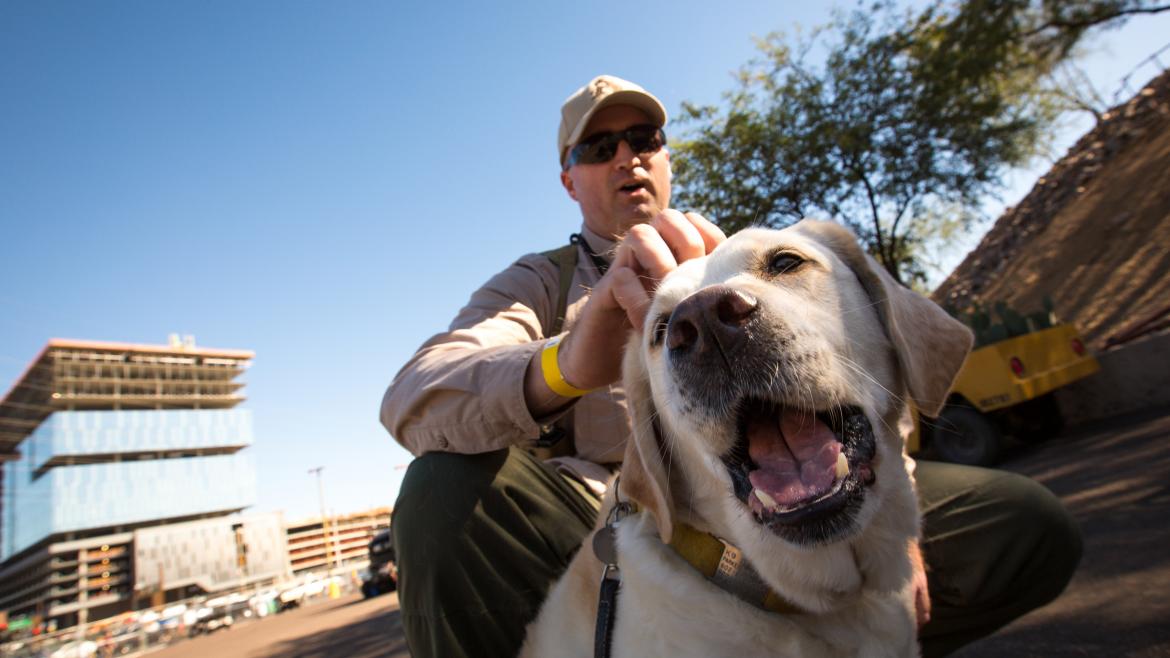 A detective and his dog keep ASU safe

Tempe campus
ASU detective and his explosives-detection dog share an intense bond.
This ASU police dog doesn't eat until she sniffs out explosives.
The Magic of Disney: ASU's bomb-sniffing dog is a super ambassador.
November 18, 2015

Most people really love their pets, but few bonds are as intense as the one between Parker Dunwoody and his Labrador retriever, Disney.

Dunwoody, a detective in the Arizona State University Police Department, handles Disney, who is the department’s explosives-detection canine. That means the two trained together, work together and live together.

But it goes beyond that. Disney is a food-reward dog. She eats only when she finds explosives.

So two or three times a day, Dunwoody must set up a training area with explosives so that Disney can sniff them out and then eat.

“On Christmas morning, I’m putting explosives out for my dog to find, we do our Christmas and then Disney gets trained after we do our stuff,” Dunwoody said. 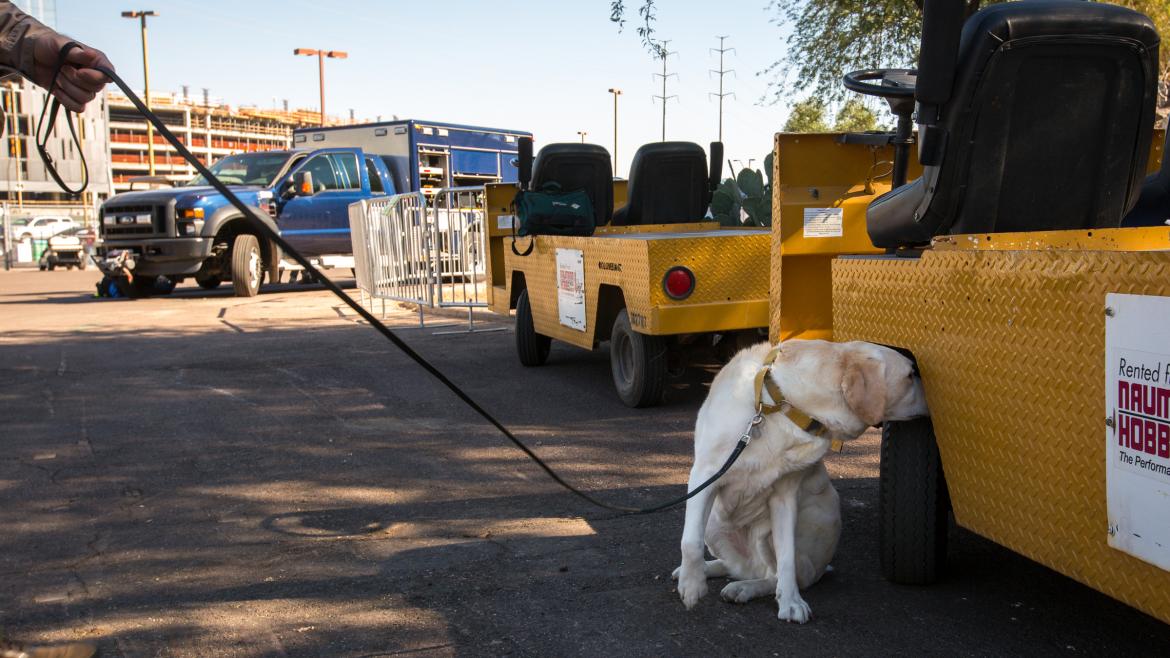 Dunwoody does have backup trainers for Disney. Another detective in the ASU department can handle her, as well as trainers from the U.S. Marshals Service, who also have explosives canines.

But most of the time, it’s the two of them.

At home, the detective will hide traces of non-regulated explosives, such as gun parts or empty shell casings. When Disney finds something, she “alerts” him by sitting down and he feeds her by hand.

Dunwoody also will take her to parks.

“Open areas are a cornucopia of smells,” he said. “You have dogs that pee there, kids that play there, people have parties there. It’s perfect for mixing in all these distracting odors to make her find what she needs to find.”

Sometimes, especially around the Fourth of July and New Year’s Eve, Disney will find spent fireworks that Dunwoody didn’t put out.

Disney can distinguish more than 19,000 combinations of explosive substances.

“Basically it’s anything that has gone ‘boom’ or will go ‘boom,’ " Dunwoody said.

The two will start a typical work day by visiting the light-rail stations that ASU students use, with Disney checking out the platforms.

When they get to the police department, Dunwoody will set up a training session for Disney in the office hallways and cubicles, where he can use explosives that are regulated and can’t leave the building.

Sometimes he’ll take her to Wells Fargo Arena or Sun Devil Stadium — places she typically will sweep during big events.

Dunwoody is also the department’s terrorism liaison officer and attends a lot of meetings. When he’s busy and she’s not, Disney relaxes in an office and accepts affection from the department staff throughout the day.

“Disney is a very important part of the ASU Police Department. She’s a dual-purpose dog in my book,” said Police Chief Michael Thompson. “Her primary purpose is work as an explosive-detection canine.

"On the other side of the coin, Disney is a huge ambassador for the department. Disney loves her job. She loves to visit elementary schools, and she loves being a part of the ASU community.”

Dunwoody and Disney have been on hundreds of assignments. In August, she assisted the Tempe Police Department as officers caught a bank-robbery suspect who is accused of firing several shots. Disney searched the area and verified the location of a gun that police say the suspect used.

Around the same time, Dunwoody and Disney traveled to Las Cruces, New Mexico, where law enforcement there was investigating a series of church bombings.

Disney also helps out other Valley agencies, including the Bureau of Alcohol, Tobacco, Firearms and Explosives, where Disney trained as a puppy, and the U.S. Marshals Service. She’ll sweep an area before events such as bowl games or visits by celebrities.

Disney, who will turn 8 years old in January, is in the last years of her service. She cannot be certified after age 9. When she retires, she’ll continue to live with Dunwoody and his family and can fully indulge in her only bad habit — lying on the furniture.

“It’s been a wild ride and very fun,” said Dunwoody, who is hoping to acquire another canine for the department.

“I’m a dog guy in general, and any chance I get to be with my canine partner is a good day.” 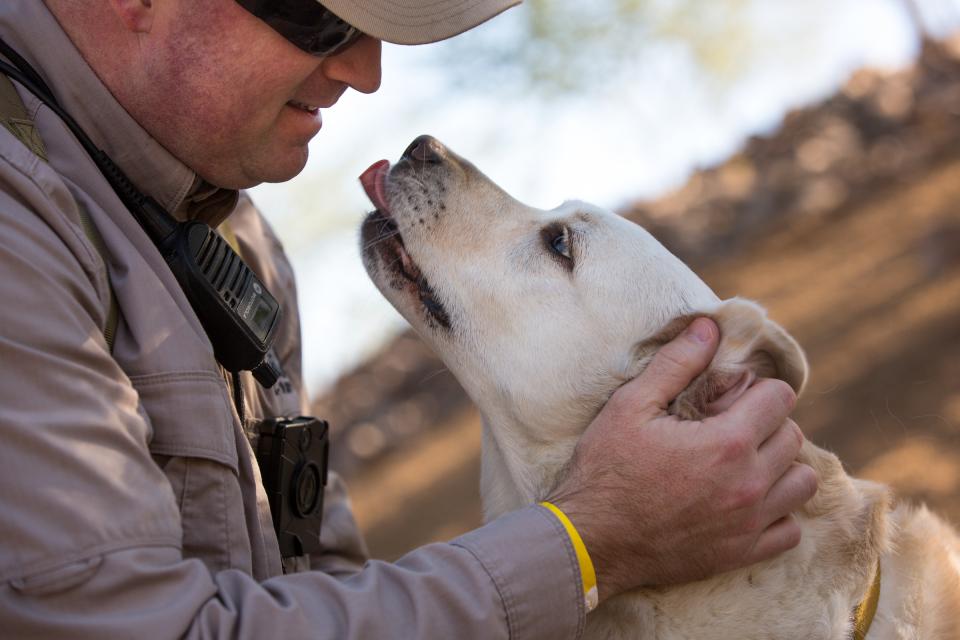 ASU Police detective Parker Dunwoody plays with Disney outside Sun Devil Stadium after she performed an explosives sweep before the Homecoming game on Nov. 14.