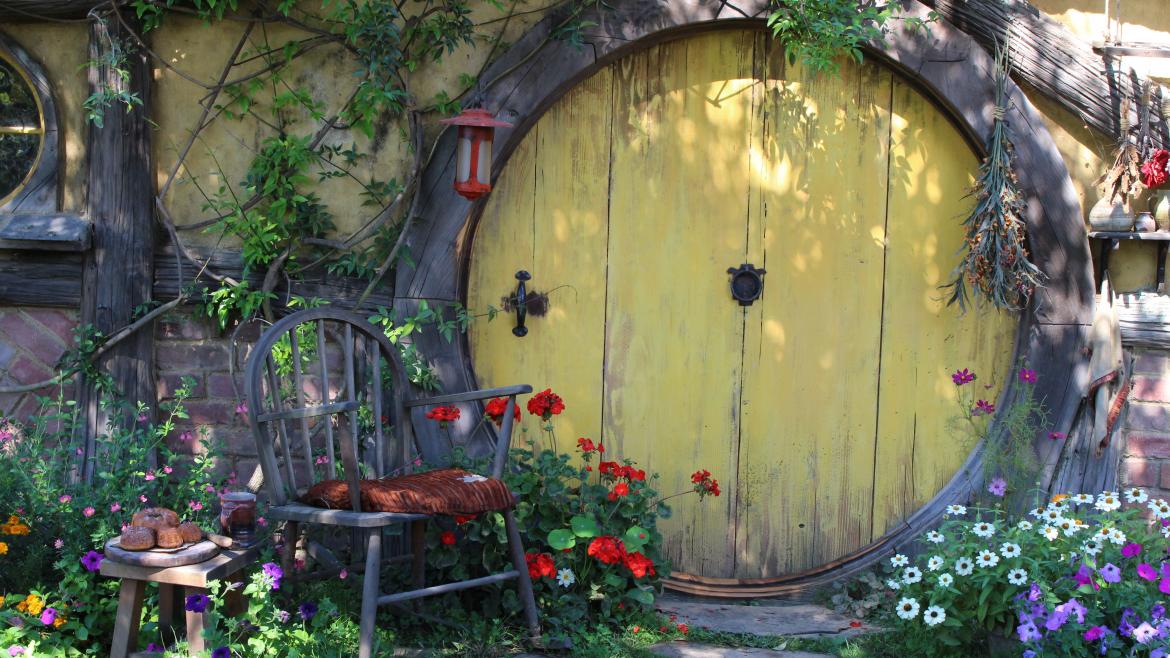 One study abroad trip to rule them all

ASU students explore New Zealand's culture in 'Lord of the Rings' journey, one of many at today's Study Abroad Fair

“It’s a dangerous business, Frodo, going out your door. You step onto the road, and if you don't keep your feet, there’s no knowing where you might be swept off toBilbo Baggins says this to his nephew, Frodo, in J.R.R. Tolkien's "Lord of the Rings: The Fellowship of the Ring.".”

For 17 Arizona State University students, they found themselves swept off to Middle-earth on a study abroad trip to New Zealand — and just like the characters in J.R.R. Tolkien’s tale, there was plenty of adventure.

Their journey included a visit to Hobbiton and Frodo’s home; a snowy climb on Mount Doom; swordplay; and plenty of “Lord of the Rings” lines being recited.

And just like the fellowship of the ring, this band of travelers came from a variety of backgrounds — not dwarves and elves, of course, but film studies majors, aerospace engineers, economics majors, even a few online students from outside Arizona.

It's one of more than 250 ASU programs in 55-plus countries that will be showcased at today's Study Abroad Fair in Tempe. ASU's robust programs range from aero-mechanics in England to wildlife-program sustainability in South Africa, from earthquake resilience in Nepal to a taste of the Peace Corps in the Dominican Republic, from tropical field biology in Panama to entrepreneurship in Israel — not to mention language immersion and academic programs the world 'round.

ASU's strength in study abroad is receiving national notice: In the "Open Doors" report released today by the independent non-profit Institute of International Education, ASU is ranked in the top 25 of universities awarding credit for study abroad, ranked by student total. The ASU group visited a number of "Lord of the Rings" filming sights, including both this forest archway and Mount Doom, which was considerably less fiery-volcano than in the movie. This and all photos below courtesy Michael Green

The official purpose of the 22-day New Zealand trip is to study the film industry, said Michael Green, a senior lecturer in film and media studies in the College of Liberal Arts and Sciences and the trip’s faculty leader. But they try to diversify the experience for non-film majors with explorations of New Zealand’s peoples and natural resources.

Hobbits and wizards, however, remained firmly in the spotlight this summer.

“There was a lot of quoting of the movies and a lot of (excitement) over being in Middle-earth,” said Joshua Cannatelli, a sophomore film and media studies major from Phoenix.

They visited museums — “a LOT of history,” according to Green — film archives, and Weta Workshop in Wellington, and the students attended movie screenings and film lectures at two universities on such topics as the economics of film.

The group also covered a lot of land. Green points out that this was a traveling trip, unlike the usual study abroad in which students stay in one location. 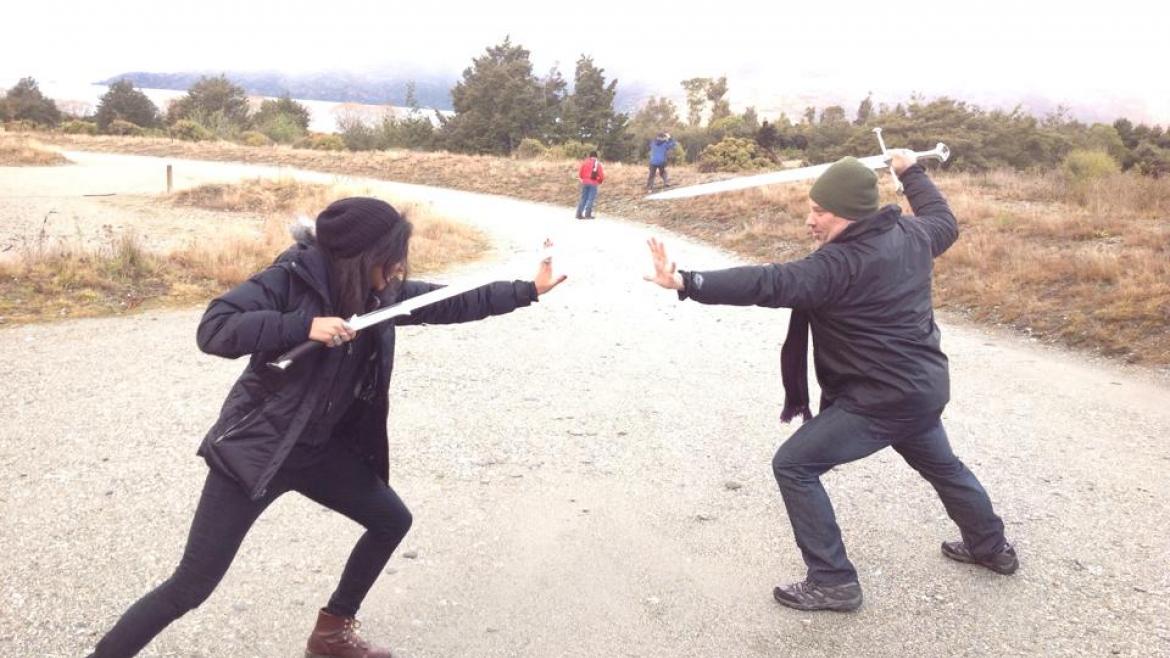 After one outing, the group
got to examine (and play-fight
with) swords based on those
in the "Lord of the Rings" movies.

Cannatelli , a self-proclaimed “huge” fan of “Lord of the Rings,” was struck not only by New Zealand’s beauty, but by how protective the country was of its plant life.

“During filming, the crew wanted to get rid of certain plants to it so it wasn’t as identifiable as New Zealand,” he said. So the filmmakers had to take plants out, plant them somewhere else temporarily, and then bring them back, making sure to keep everything alive.

Though there were many filming sites on their itinerary — including crowd favorite Hobbiton — there was a great emphasis on the Maori culture. Activities in Auckland and Rotorua, the heartland of the country’s indigenous culture, included a ceremony and meal at a Maori lodge.

“That was really well done,” Green said. “The guy who did it was super cool. We sang and everything.”

The group learned about the interactions between the Europeans and the indigenous people, and how they got along better than similar groups in the U.S.

“I’m not saying it’s perfect,” Green said of the Euro-Maori relations. “It’s interesting — both groups arrived in New Zealand about the same time. … The laws are fairer; the economic situation is fairer. But it’s not perfect.”

For Kayla Shepherd, a sophomore global studies major from Bullhead City, Arizona, the experience was a good mix of movies and New Zealand culture.

“I mostly went to the ‘Lord of the Rings’ stuff for pleasure … the Maori stuff felt more like my major,” she said. 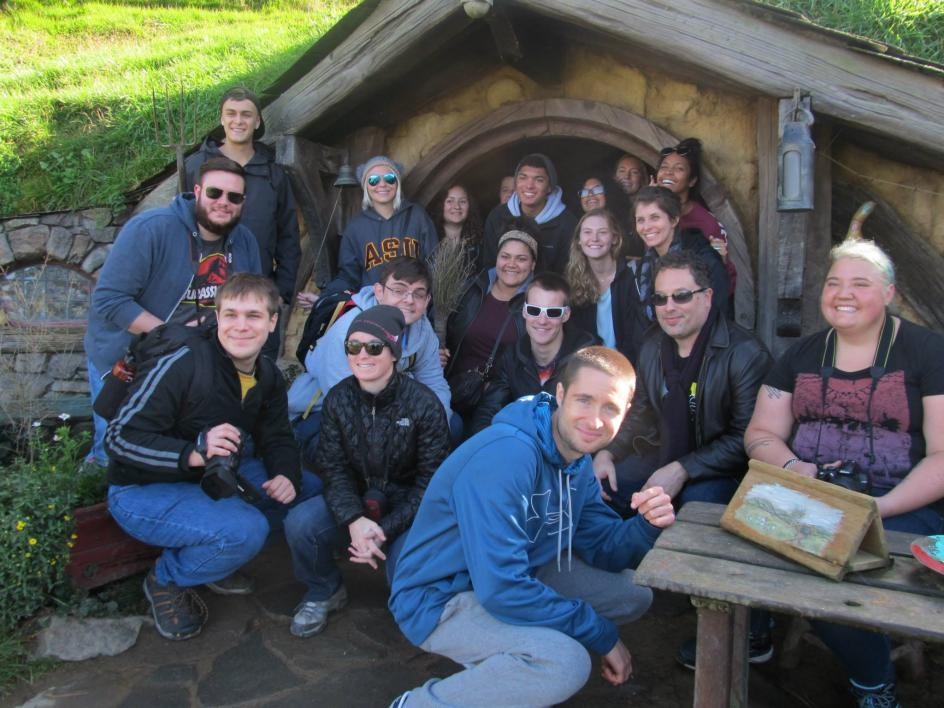 The visit to Hobbiton on New Zealand's North Island was a highlight for many of the students. The filming site has been maintained by the land owners as an attraction that allows visitors plenty of photo opportunities to peek inside hobbit gardens and homes, such as this one — and a visit near the end to the charmingly decorated Green Dragon Inn restaurant. 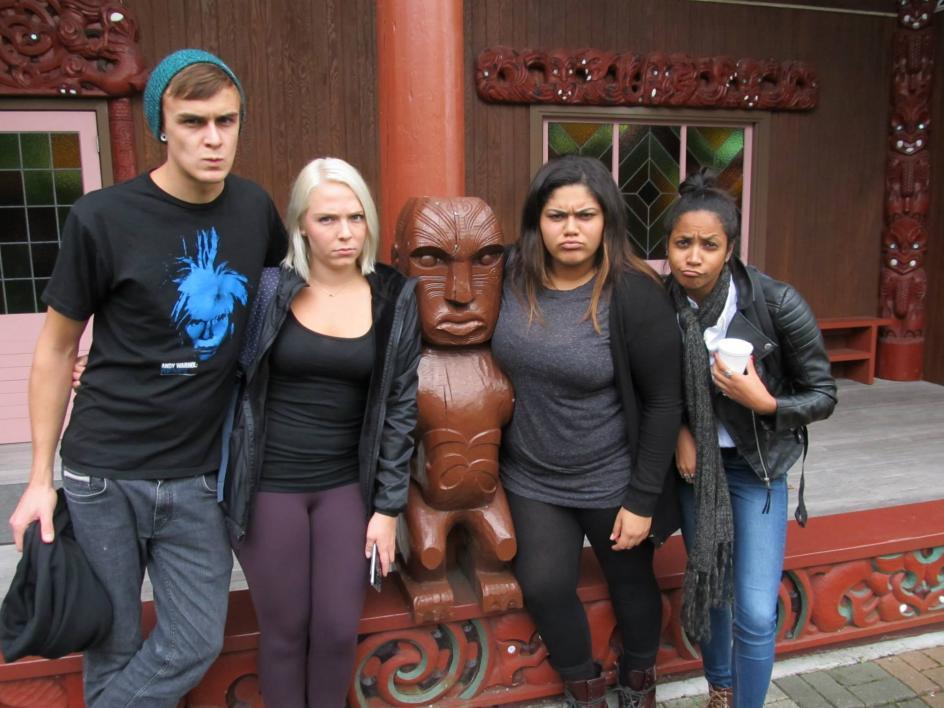 Silly faces aside, students and faculty alike found most interesting the parts of the trip in which they learned about Maori culture, and how New Zealand's European and indigenous peoples have interacted over the years. 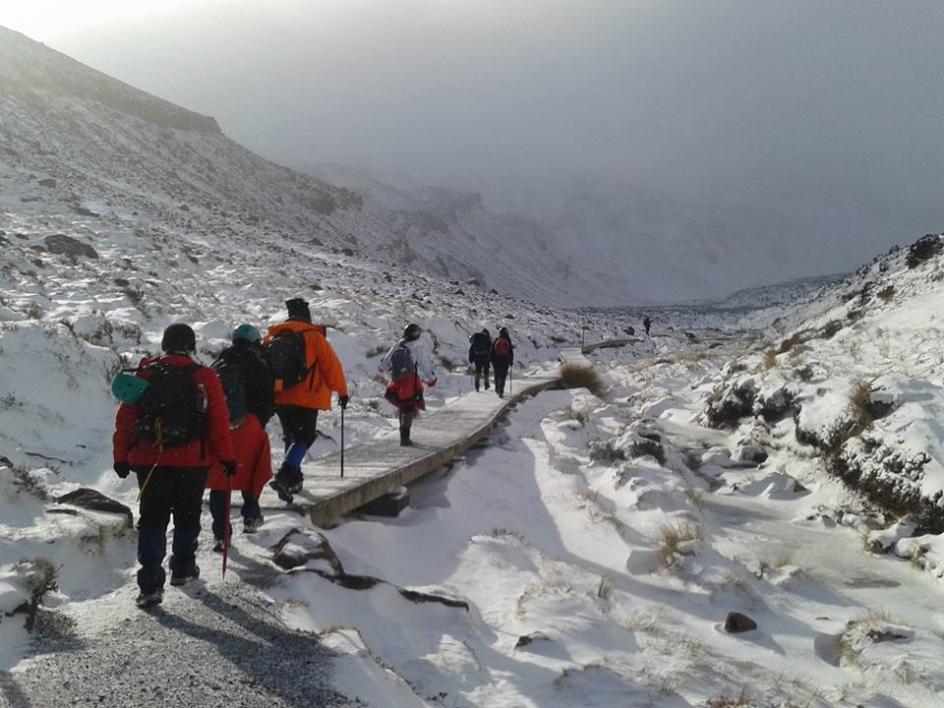 Adventurous students (and their faculty chaperone) head off on a hike to the filming site of Mount Doom. The group visited during the Southern Hemisphere's winter and got a far chillier experience than Frodo and Sam in the final movie. 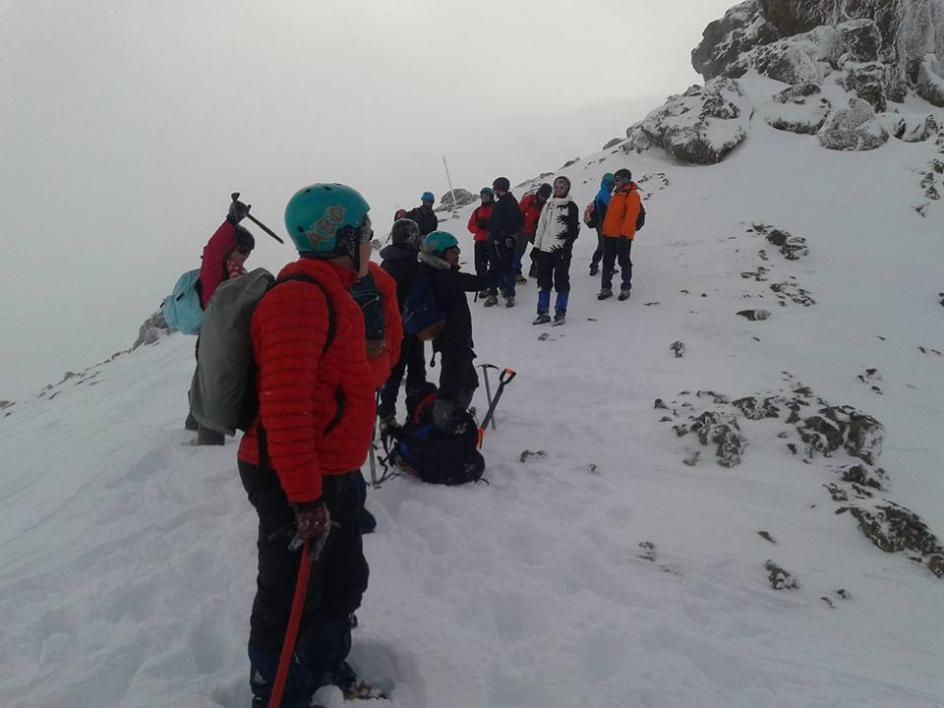 Snowy conditions eventually silenced all of the "Lord of the Rings" quoting among the hikers. 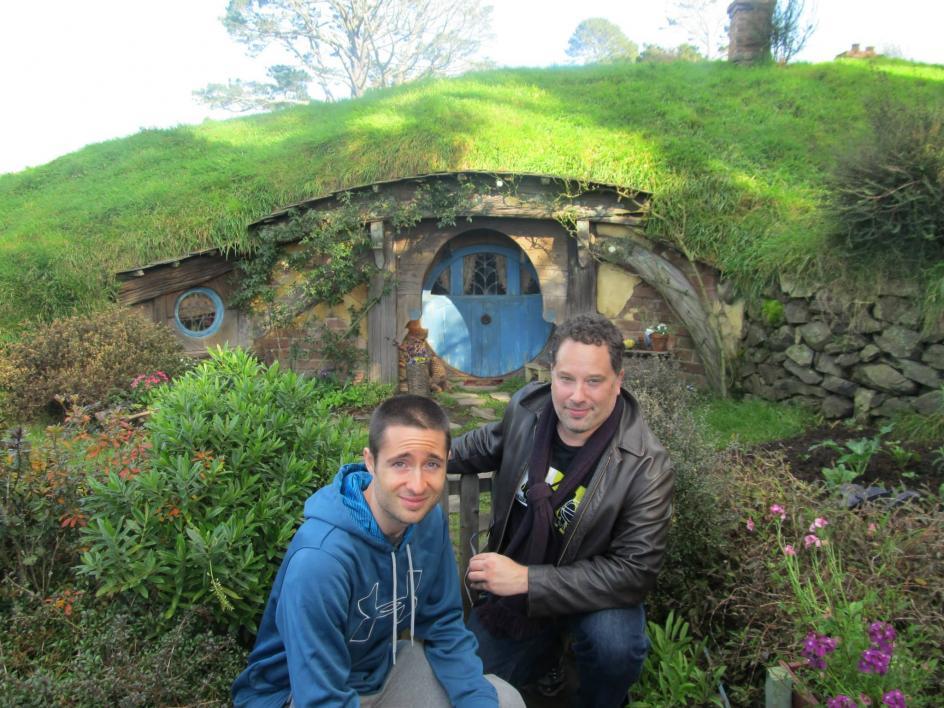 Michael Green (right), senior lecturer in film and media studies in the College of Liberal Arts and Sciences and the trip’s faculty leader, has long been a Tolkien fan. “I was reading Tolkien when I was 6," he said. " ‘The Hobbit’ was the first book I read.”

Like others in the group, she had never been on a plane before the roughly 13-hour trip across the ocean. “Go big or go home,” she said.

Few if any of the students in the group knew each other beforehand, but just like the famous fellowship, traveling together for that long bonded them together.

“That’s what I was most scared for, but the whole group was amazing. And I’m glad I went, because now we get to have that friendship and that common memory,” said Shepherd, who keeps in touch with her fellow travelers on Facebook.

Some in the group got tattoos, including Green. His is a Maori symbol for a spiritual guardian, a messenger between the spirit and physical world that wards off evil — a symbol that spoke to him on a personal level.

And in their free time, many explored New Zealand’s extreme sports. One such instance was when eight of them — including Green — climbed a volcano in a blizzard. It was the filming location of Mount Doom on the North Island, and Green said they were quoting the movie “as much as we could if we weren’t freezing or exhausted.” Cannatelli called it the biggest moment of the trip.

Students received six credit hours, for which they had to keep a journal during the trip and work on a final project. The credit hours were almost just a bonus, though, taking a back seat to the beauty and adventure of Middle-earth.

Not every moment was magical, however. Some of the food was a shock.

“Their type of pizza is waaaay different over there,” said Shepherd, who once ordered a “pepperoni” pizza only to find it was made with deer and cranberries.

At least it wasn’t lembas breadLembas is a special bread made by Tolkien's elves, a waybread in which "one small bite is enough to fill the stomach of a grown man." It was the only food source for Sam and Frodo during much of their journey, and eventually Sam began to detest it..

What: Once-a-year showcase of ASU's 250-plus study abroad programs in more than 55 countries. Staff and students will be on hand to answer questions, and information will be available about funding opportunities. Programs range from two weeks to a full year.

Where: Second floor of the Memorial Union on the Tempe campus.

This is the centennial year for the Sun Devil Marching Band, and to mark the occasion more than 500 alumni dusted off their instruments to join the 350 current member of the band at the Homecoming halftime show Saturday.If you missed it, enjoy a portion of the show below.For photos from the full week of Homecoming 2015 festivities, click here.Top photo: ASU alumni band member Paul Hathcock perform... 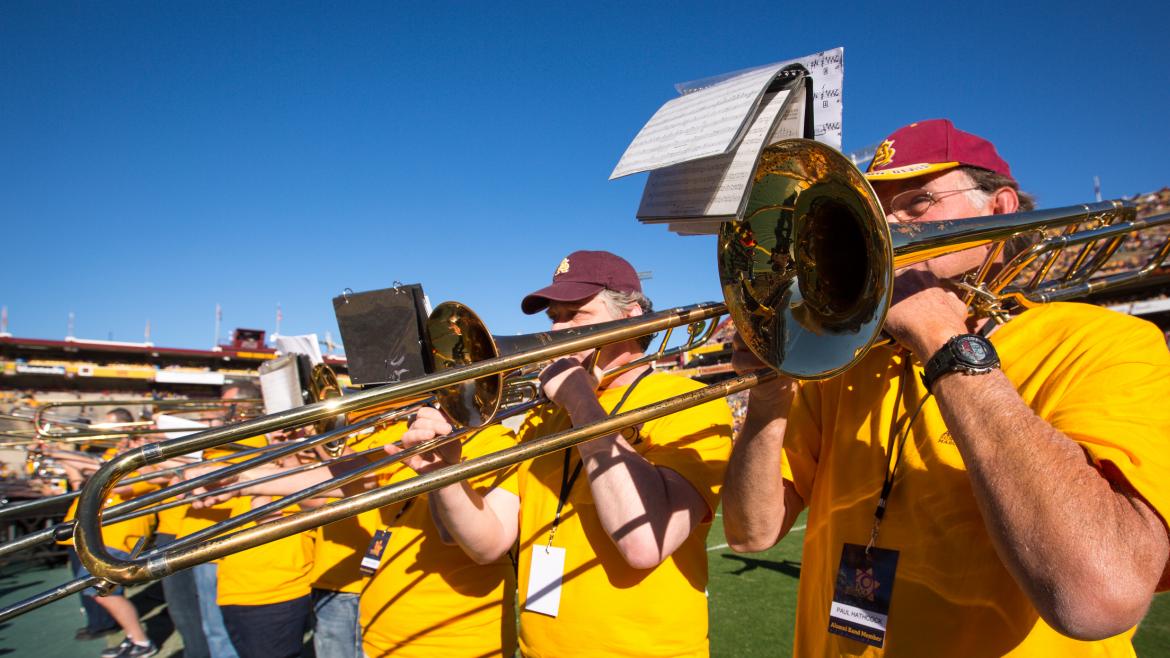 This is the centennial year for the Sun Devil Marching Band, and to mark the occasion more than 500 alumni dusted off their instruments to join the 350 current member of the band at the Homecoming halftime show Saturday.

If you missed it, enjoy a portion of the show below.

For photos from the full week of Homecoming 2015 festivities, click here.