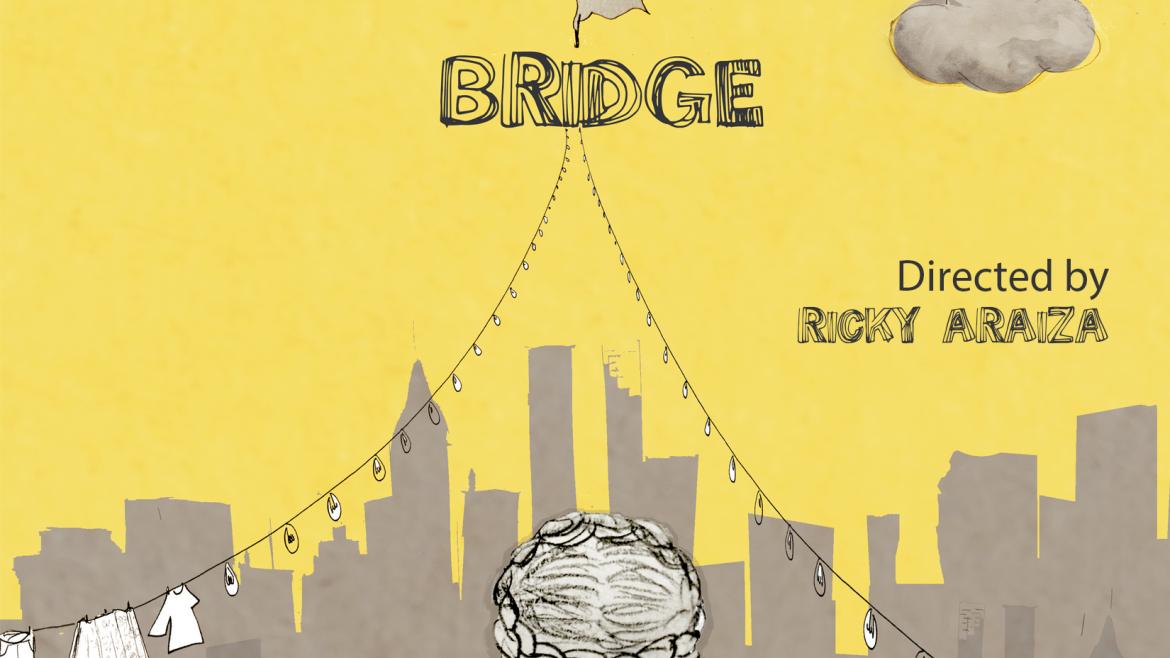 'Brooklyn Bridge' an atmosphere of experimentation

Ten-year-old Sasha is poised to write an essay. The only thing missing? A pen.

“This is an enormous show,” said Ricky Araiza, a graduate student in directing and theater for youth, who is helming this production. “It’s going to be a visual spectacle, and it’s hilarious — delightfully clever and witty.”

To set the stage, Araiza has been working with ASU alum and set designer Brunella Provvidente to create an interactive backdrop for the story.

“The initial design concept for set was that I wanted it to feel like a project,” Araiza said. “We will have essentially the feel of a diorama on stage of this world created by Sasha and the people who inhabit this building. You’ll essentially get to see the set talk back to the actors — it moves, it’s alive.”

For the actors in this production, Araiza’s approach has created an atmosphere of experimentation.

“My favorite part of working on the production is that I get to play again,” said Andre Johnson, an undergraduate theater exploratory student who plays Sam. “I guess sometimes you kind of feel a little bit dull when it comes to theater, you kind of forget what it’s all about or why you’re doing it. And then you come into a play like this where it’s aimed towards children and it’s about education, and it’s so much fun.”

Though “Brooklyn Bridge” is a Theatre for Youth production, Araiza explains that the appeal of the show is not at all limited to children alone.

“I think the themes are universal,” Araiza said. “It’s this want for us to connect with each other; there’s the fear of the unknown and how we choose to handle that; this story touches a lot on immigrant issues right now.”

“The more I work on it and the more we rehearse, the more I discover scary similarities [between us],” Bezpaltchikova said. “We are both first-generation Americans. Our parents moved here from the Soviet Union. My parents work pretty hard and definitely had to struggle to make their way in this country.”

In the play, Sasha’s own struggle for a pen is a metaphor for a more adult struggle to find a sense of belonging. Two musicians in the show, played by undergraduate theater students Emily Adams and Audrey Pfeifer, manifest Sasha’s challenges through song.

Though the musicians are technically characters in the script, Adams and Pfeifer really did work together to compose an original piece for ASU's production of the show.

”As Sasha is searching for a pen, we are coming up with the ending song, which is actually a song that we wrote together,” said Pfeifer. “So throughout the show, you’ll hear us trying out the song, getting frustrated, rewriting some things. And it kind of works as background for what Sasha is going through.”

“As Sasha begins to come out of her shell and develop throughout the play, so does the song,” Adams said. “While we’re both characters in the play, we both almost act like these narrators for Sasha’s life, a little bit all-knowing.”

“It does truly take a village to raise a child, and we really do get to see that village coming together in this show,” Araiza said. “When that happens, it’s a really touching moment. All the elements in the show — set, costume, media, music — everything coming together at once is really touching to see and hear and experience.”

“Brooklyn Bridge” is playing at the Paul V. Galvin Playhouse, 51 E. 10th St., on ASU’s Tempe campus on these dates:

Creativity Tempe campus Herberger Institute for Design and the Arts School of Film, Dance and Theatre Arts and Entertainment Student

The U.S. Department of Health and Human Services has awarded Arizona State University a grant, totaling $1 million dollars, which will go toward the Earn to Learn scholarship program. ASU will match the grant amount, increasing the program’s total funds to $6.5 million dollars, all of which is available for student scholarships.“ASU Earn to Learn is an important example of how ASU is increasin...

The U.S. Department of Health and Human Services has awarded Arizona State University a grant, totaling $1 million dollars, which will go toward the Earn to Learn scholarship program. ASU will match the grant amount, increasing the program’s total funds to $6.5 million dollars, all of which is available for student scholarships.

“ASU Earn to Learn is an important example of how ASU is increasing access to higher education for Arizona's students and families,” said Sylvia Symonds, assistant vice president of ASU educational outreach.

ASU Earn to Learn is a college savings scholarship program which helps high school students build financial knowledge and establish a college savings account. Eligible students can save up to $500, and ASU will match the amount saved 8 to 1 — totaling $4,500.

"With ASU Earn to Learn, Arizona students and their families are able to benefit not only from financial support to pursue a university degree, but also gain a more comprehensive understanding of financial literacy to better their lives for years to come,” said Melissa McGurgan, Access ASU associate director.

Students who participate in ASU Earn to Learn can utilize their scholarship to take ASU courses while in high school through the Collegiate Scholars Academy, or when they attend ASU as full-time freshmen.

This fall more than 130 Earn to Learn students are enrolled at ASU — breaking the record as the largest cohort of student savers. Collectively, this group of students have saved $69,000 through the college savings scholarship program, a scholarship that amounts to $552,000 after ASU’s 8 to 1 match.

At ASU, a collaboration with students, parents and families is key to create broader accessibility and college preparedness among Arizona youth.

“As highlighted in our Charter, at ASU we want to be defined by whom we include and how they succeed,” Symonds said. “Our Earn to Learn program makes good on that promise by providing financial literacy and support to ensure students have what they need to achieve their higher education goals.”

ASU Earn to Learn is open to current high school sophomores, juniors, and seniors planning to attend ASU in Fall 2016 or later. Students interested in saving with Earn to Learn, should complete the AZ Earn to Learn participant survey by Nov. 25 at participantsurvey.org.

To learn more about the ASU Earn to Learn program, visit: eoss.asu.edu/earntolearn. To see the full list of September 2015 awardees, visit: www.acf.hhs.gov/programs/ocs/resource/afi-grant-awards-fy-2015.