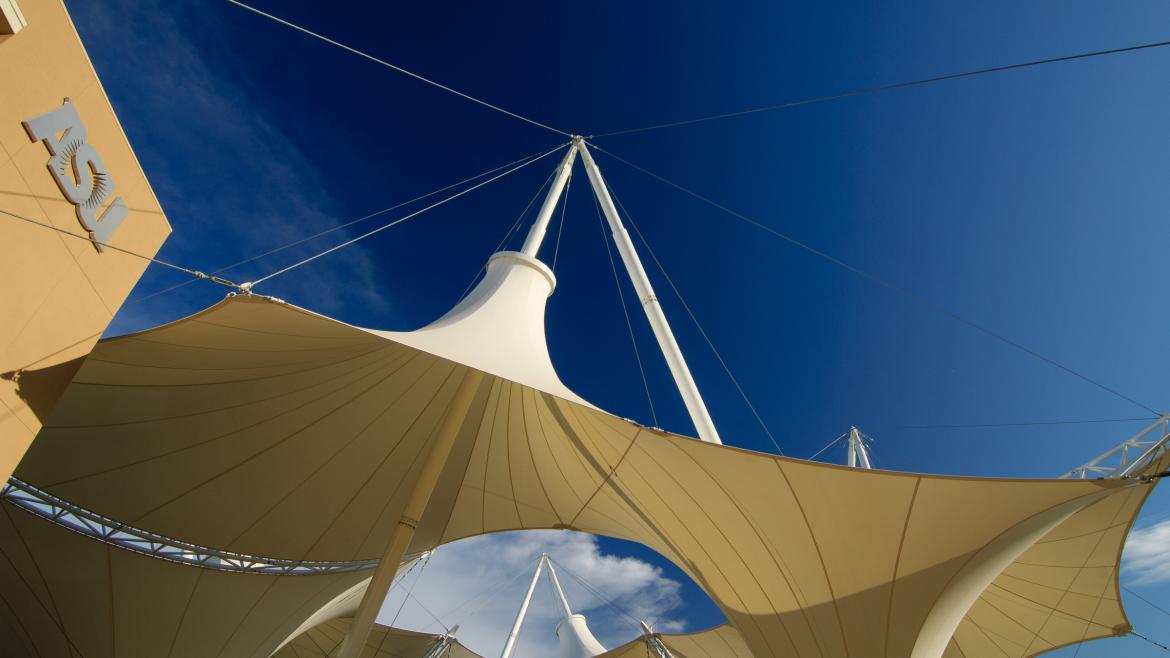 University hunkers down with Bunker Labs to advance programs

Coinciding with Arizona State University’s annual Salute to Service honoring military, veterans and their families, the university is on a mission to make a big impact for our veterans. The Office of Entrepreneurship and Innovation at ASU is leading this effort and teaming up with the Bunker Labs (the Bunker), a non-profit nationwide network that supports veteran entrepreneurs, to launch initiatives that include the ASU Veteran Accelerator.

The ASU Veteran Accelerator will provide entrepreneurial training, mentorship and support for student or faculty veterans with support of the Bunker, which will have offices at ASU SkySong where the program will be based. This collaborative effort between ASU and the Bunker can unlock the potential of identifying and nurturing veteran start-ups by tapping into the robust Arizona veteran community. ASU students, faculty and community veterans interested in growing an existing venture or seeking guidance to develop a start-up idea will have access to training, mentors and support through ASU and the Bunker to accelerate their entrepreneurial potential.

ASU is initiating this program to fill a need for innovative ways to elevate the importance of supporting the military and veteran community in starting businesses. “As a very proud Navy reservist, I see firsthand the tremendous talent that comes out of military service and how that can be translated into valuable business skills,” said Tracy Lea, program manager at ASU’s Office of Entrepreneurship and Innovation. “ASU aims to create pathways for veterans who have entrepreneurial aspirations.”

“ASU has a strong and enduring commitment to our military and veteran population, creating and managing programs that include opportunities for men and women transitioning from their military careers,” said Sethuraman Panchanathan, senior vice president at ASU’s Office of Knowledge Enterprise Development, which includes the Office of Entrepreneurship and Innovation. “The ASU Veteran Accelerator program and collaboration with the Bunker Labs Incubator demonstrates an opportunity for our veterans to pursue their entrepreneurial aspirations by equipping them with training and mentorship support to help guide them in their process.”

"Bunker Labs leadership is really excited at the opportunity to help ASU veteran students break into entrepreneurship as a career path.  Historically, veterans are excellent start-up founders and business leaders,” said Bunker Labs executive director Phillip Potter. “Our national incubator network has enjoyed tremendous success assisting talented veterans navigate the early stages of new venture creation, product development, and market entry.  In just the last year, Bunker Labs founders have raised several millions of dollars in seed capital and been accepted to some of the world's most prestigious technology accelerators.  We are confident that we'll have similar results in Arizona."

Interested veteran ASU students and faculty can contact Tracy Lea for the application process and to learn about an information session to be held in December: Tracy.Lea@asu.edu, 480-884-1554.

Students get a glimpse of workplace life

The reality of the workplace can be hard for students to grasp, but a new job shadowing program is giving some Arizona State University students a clearer idea of what their potential careers look like.Twelve students from ASU’s Polytechnic campus are spending several hours a week this semester with mentors in the East Valley through a partnership with the Gilbert Chamber of Commerce.Stephanie S... 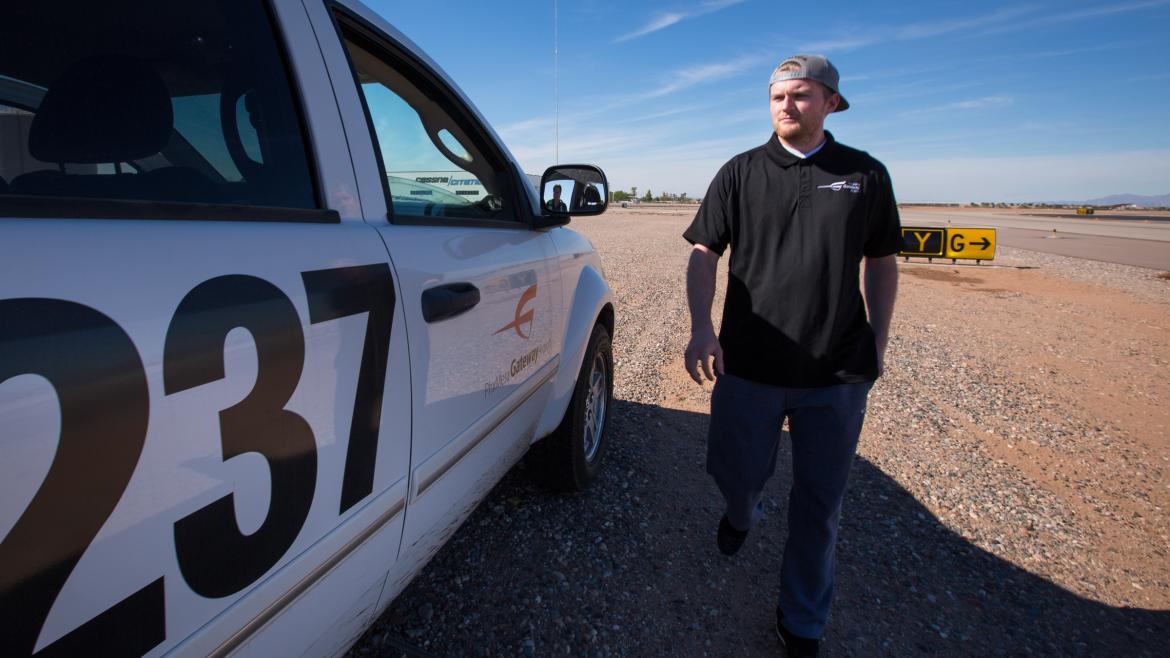 Students get a glimpse of workplace life

The reality of the workplace can be hard for students to grasp, but a new job shadowing program is giving some Arizona State University students a clearer idea of what their potential careers look like.

Twelve students from ASU’s Polytechnic campus are spending several hours a week this semester with mentors in the East Valley through a partnership with the Gilbert Chamber of Commerce.

Stephanie Salazar, director for East Valley community and municipal relations at the ASU's Polytechnic campus, created a shadowing program several years ago through the city of Tempe, and it was so successful that she launched a similar one last spring.

“It was important to me that students have the opportunity to be mentored, but I also wanted to show the community what our students are doing and the impact they can have,” Salazar said.

“We want them to be workforce-ready and socially embedded.”

The students are being mentored at places including Lockheed Martin, Orbital ATK and several medical practices.

Ryan Bain, a junior majoring in air-traffic management, is shadowing staff members in the operations and maintenance department at the Phoenix-Mesa Gateway Airport. His plan to become an air-traffic controller started at the airport while he was still at Chaparral High School in Scottsdale.

“I took a tour here while I was in high school, and it really piqued my interest,” he said.

“It’s been really insightful,” he said of the shadowing program. “I’ve really seen the commercial side of things at the airport and what the city requires.”

Bain (pictured above at the airport in a photo by Charlie Leight/ASU Now) has spent time with the controllers as well as helping the operations staff perform inspections.

Ivan Smith, supervisor of operations at the airport, said this is the first time he has mentored an ASU student.

“We’re here to serve the public,” he said of the decision to participate.

Smith has arranged Bain’s schedule so that he can spend time with several staff members who work different shifts.

"Every day is different. She might go to a kickoff meeting for an event, or film a video or launch a website or meet with people in the community."

“We have inspections that we only do overnight that have to be done in the dark hours,” Smith said.

“Having him come the same three hours every time would have been very limiting in what he could see.”

Taniyah Williamson, a junior communications major at ASU Polytechnic, is being mentored by Jennifer Alvarez, the digital media and marketing officer for the town of Gilbert.

“I’ve gotten to see all the social-media tools they use,” Williamson said. “Every day is different. She might go to a kickoff meeting for an event, or film a video or launch a website or meet with people in the community.

“She gets to meet so many people, and she’s not a prisoner to a cubicle.”

The shadowing has made Williamson excited for her career.

“It’s been eye-opening knowing that there are so many options open to me for when I graduate,” Williamson said.

The program has enlightened the Gilbert businesses as well.

“It is our goal to provide students with a real-world understanding of the opportunities that exist within their field of study,” said Kathy Tilque, president and CEO of the Gilbert Chamber of Commerce. “In many cases, the students have been able to solidify their interests and narrow their scope of study. The mentors that have participated have also found value in understanding the different degrees that may be a fit to their organizations.”

Salazar, who hopes the program eventually can be expanded into a full-fledged internship, said one mentor has already agreed to participate again next semester.

“So you can see that impact when the mentors want to come back,” she said.