Veterans can face a number of challenges when they return home from the battlefield.

Some suffer through PTSD or depression. Others grapple with sleep disorders. And many have to deal with the reality of permanent injuries.

But one trait that doesn’t get much publicity might be the most widespread and damaging of all: inactivity.

After spending years in a culture that regimented every part of the day — including physical activity — soldiers often come back to unstructured and sedentary lives. The change can lead to declining physical and mental health.

However, there could be help on the way.

A transdisciplinary team of researchers at Arizona State University’s College of Health Solutions and the College of Nursing and Health Innovation, along with the Phoenix VA Health Care System, are developing an Android-based smartphone app called BeWell24. The app is aimed at veterans who are susceptible to metabolic syndrome, which is a cluster of conditions that puts individuals at greater risk for diabetes and cardiovascular disease.

“Veterans are at high risk to all of these due to disproportional rates of obesity, and it’s driven primarily because of lifestyle behaviors,” said Matthew Buman, an assistant professor in the School of Nutrition and Health Promotion.

“They come back from deployment challenged in many ways. They have a new set of stressors in how to habituate themselves back into daily life and tend to, at earlier ages than non-veterans, develop risk factors for disease.”

A $50,000 Virginia G. Piper Charitable Trust seed grant has enabled Buman and his team to develop an app that monitors a combination of three behavioral components — sleep, sedentary behavior and physical activity — in a 24-hour cycle. 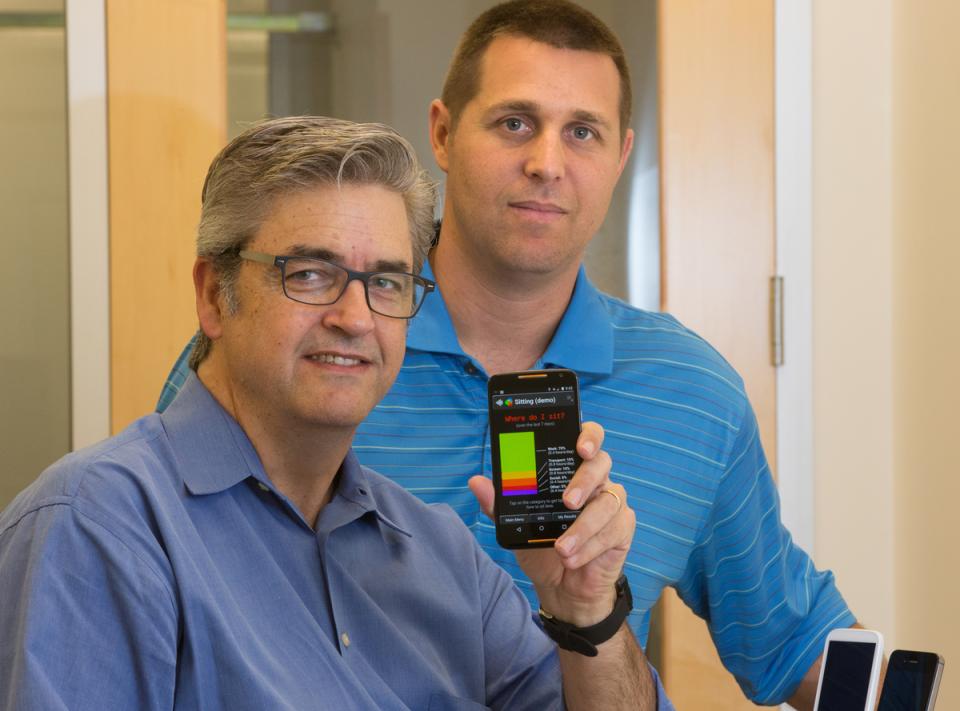 Buman and Dr. Dana Epstein, chief of nursing research evidence-based practice at the Phoenix VA, just finished a pilot study of veterans ages 30 to 65. They asked vets to use the app to monitor their activity for an eight-week period, hoping that smartphone-based behavioral changes could lead to improvements in sleep, sedentary behavior and physical activity.

Preliminary findings have already shown that the app can significantly improve sleeping and activity patterns in the eight-week window.

“We know that reallocating just 30 minutes a day of sedentary time with equal time of sleep or physical activity can lead to improvements in health,” Buman said. “For example, we know that someone might have a favorite TV show they watch. We’re not asking them to not watch the show. We might suggest they get up during the commercials and perform a household chore just to get up and walk around. It’s a very common-sense approach.”

Buman said he and his team have spent almost two years developing the app, along with ASU software engineer Kevin Hollingshead, who also works in the College of Health Solutions and was the lead developer on the BeWell24 app.

The app is not ready for market and needs further development. Buman’s team will apply for a large grant from the National Institutes of Health this coming March. The grant would enable BeWell24 to be tested on a wider scale.

“The challenge is there are a lot of apps out, but we don’t know whether they actually work or not to change behavior,” Buman said. “Ours is based on principles we know are evidence-based, and that’s where we’re different.”

Achieving Zero Waste one scrap at a time

Thirty percent of the waste created on ASU’s campuses is no longer going to a landfill thanks to the efforts of ASU’s Zero Waste team.Instead, that waste has been diverted through recycling, composting and reusing.It is a big accomplishment toward the university’s goal of reducing its landfill waste by 90 percent. But there’s more work to be done, so the team has various initiatives and ev...

Achieving Zero Waste one scrap at a time

Thirty percent of the waste created on ASU’s campuses is no longer going to a landfill thanks to the efforts of ASU’s Zero Waste team.

Instead, that waste has been diverted through recycling, composting and reusing. 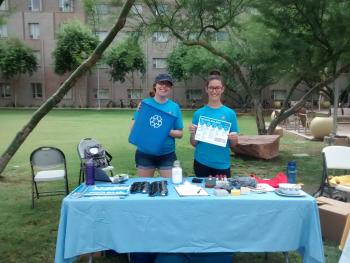 ASU's Zero Waste team educates the campus community about what can be recycled. Their efforts have helped divert 30 percent of ASU waste way from landfills. Photo by Elaine Rettger

It is a big accomplishment toward the university’s goal of reducing its landfill waste by 90 percent. But there’s more work to be done, so the team has various initiatives and events lined up throughout the next year to help ASU along its path toward zero waste.

They're not alone though. The team has help from Bin Ambassadors — student volunteers who fundraise through the Zero Waste program for their student organization. The ambassadors can be found “bin guarding” or advising others about throwing their waste into the proper bins at various campus events.

The Bin Ambassadors will be at ASU's homecoming game on Nov. 14, as well as the Nov. 21 game against the University of Arizona. There will not be a landfill bin option for throwing out waste inside the stadium during the games, so the ambassadors will be on hand to help attendees make informed decisions about disposing of their waste.

According to Katherine Schumacher, program coordinator senior with the Zero Waste Department, approximately 20 to 30 student volunteers come to events as ambassadors. They continue to work toward the Zero Waste goal not only by attending games but also by volunteering at a table set up at the ASU Farmers Market and through additional marketing initiatives.

One such initiative is a recycling education video, which will inform viewers about what can and cannot be recycled. The minute-long video will be released in the spring and aired in high-profile buildings like the Memorial Union on the Tempe campus, as well as on social media.

Another university initiative, Ditch the Dumpster, encourages students to recycle their belongings during fall move-in and spring move-out. Instead of throwing their dorm room accessories and accumulated belongings into the dumpster, students can recycle and donate items to Big Brothers Big Sisters, Goodwill and the Tempe Methodist Church. During last spring’s move-out ASU students donated, recycled and repurposed 157,594 pounds of material, according to the Julie Ann Wrigley Global Institute of Sustainability.

The team is also implementing a Zero Waste station in the Memorial Union at ASU’s Tempe campus. This station will provide users with hands-on recycling education about their food scraps, according to Schumacher. Staff will be present during the busiest lunch hours to help people better understand the processes.

There are also plans for a Net Zero building, which Alana Levine, assistant director of the Zero Waste Department, says will be the shining example of a zero waste building for other buildings on campus, other universities and even other businesses in the area.

To learn more about the Zero Waste initiative, visit https://cfo.asu.edu/zw.