Laptop computers have become such an essential part of our lives that it’s almost become odd to consider doing things like paying bills or buying a book without one.

But conducting an orchestra?

That’s the premise behind LORKAS, a student-run experimental “laptop orchestra” at Arizona State University that’s bridging the gap between the worlds of computer programming and performance art.

“We come from a wide swath of people. While I wouldn’t use the word ‘misfit-y,’ I definitely can say we’re a weird bunch,” said Althea Pergakis, a digital culture major in the School of Arts, Media and EngineeringThe School of Arts, Media and Engineering is a collaborative initiative between the Herberger Institute for Design and the Arts and the Ira A. Fulton Schools of Engineering., who is also the co-director of LORKAS.

The ensemble, which is comprised of 10 core members, includes instrumentalists, programmers, composers, audio engineers, designers, singers and fabrication specialists. As a whole, it’s encouraging creative expression with technology and the arts.

“Half the people are into digital media while the other half are coming from the School of MusicThe School of Music is part of the Herberger Institute for Design and the Arts.. We are all looking for something new, weird and different,” Pergakis said. “Essentially, LORKAS is a sandbox that allows us to go to a special place and explore.” 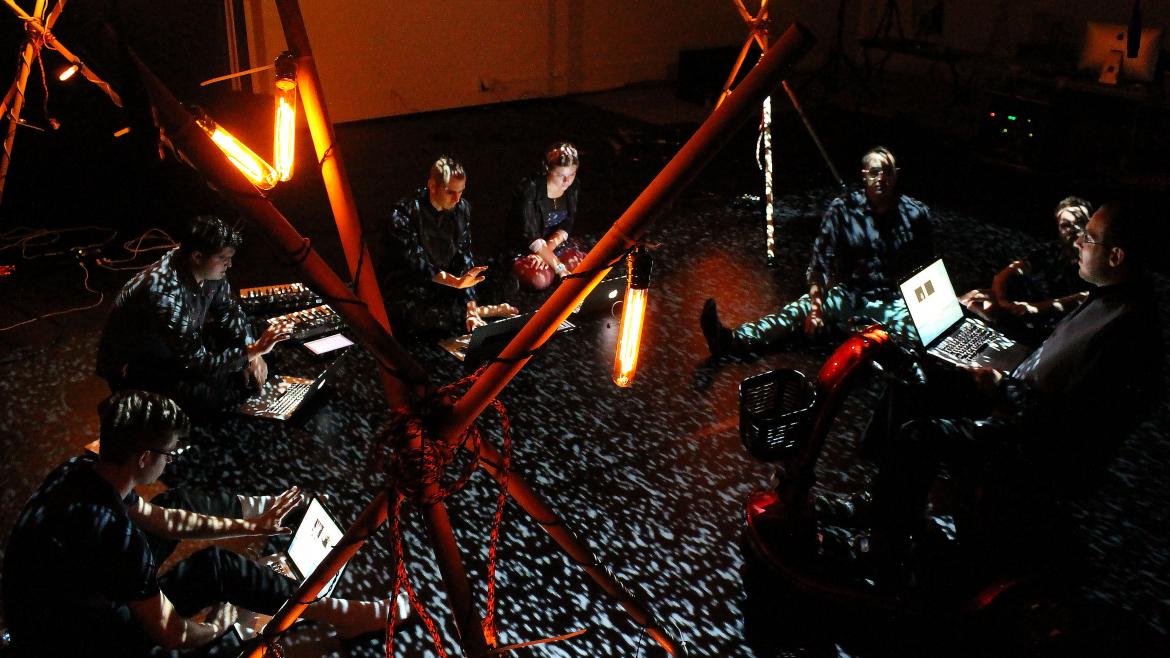 LORKAS, ASU's student-run laptop orchestra,
performs by coding music both before and during performances.

The group will participate in the annual School of Music Prisms Contemporary Music Festival, which runs Nov. 4-7 on ASU’s Tempe campus. This year the festival will honor renowned French composer Pierre Boulez, celebrating his 90th birthday.

As part of the festival, LORKAS is hosting a Nov. 4 workshop featuring Diemo Schwarz, an artist and executive with Paris-based Ircam, considered one of the more cutting-edge, non-profit research centers in the field of music technology and the media arts.

Founded in 2010, LORKAS was inspired by other laptop orchestras that began popping up after Stanford University debuted the concept a decade ago. The orchestra uses specialty-software equipped laptops to create original compositions in an improvisational manner, enhanced by gestural controls, eyesight cameras and wireless DMX lighting to create a one-of-a-kind sonic and aesthetic experience.

“We are generating live sounds and a lot of the music is improvisational,” Pergakis said. “We really do try to add a little zing to our set by immersing people in the sound.”

Each “instrument” consists of a laptop, an individual speaker, and a variety of control devices such as keyboards, graphic tablets and sensors which are run by ChucK, a music programming language that allows participants to code both in preparation for and during an actual performance.

“I find the interactivity between human beings and technology to be fascinating,” said co-director Justin Leo Kennedy, who is working on his Doctor of Musical Arts in composition in the School of Music. “There’s a stigma that the millennials have ruined a generation of music because of technology. And if I hear that one more time, I’ll probably throw up.”

LORKAS is also adding a little zing to its professional resume. December will see the release of their first album, “Nodes,” which includes 60 minutes of original compositions.

“People should come to LORKAS and see that both technology and music are what we decide to make of it,” Kennedy said.

Statistics for the Graduation Success Rate (GSR) released Wednesday by the NCAA indicated an 84 percent graduation success rate, an all-time high for Arizona State University.ASU has either tied or surpassed its all-time best in each of the past nine years.The GSR is based on student-athletes who entered college as freshmen in 2005-2008 and ultimately entered ASU on athletic aid as freshmen or tra...

ASU has either tied or surpassed its all-time best in each of the past nine years. 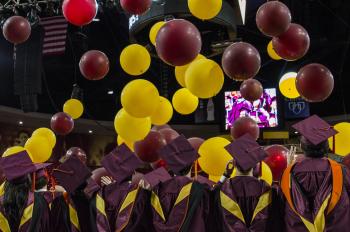 The GSR is based on student-athletes who entered college as freshmen in 2005-2008 and ultimately entered ASU on athletic aid as freshmen or transfers. The GSR allows for the removal of those individuals from the cohort who left ASU in good academic standing prior to completing their eligibility and is the NCAA’s primary tool for measuring academic success.

ASU’s stated goal when the GSR was introduced 10 years ago was 80 percent, which was reached in 2012.  Ten years ago, ASU's GSR was at 69 percent, and it has seen a 15 percent increase since that point.

"We are proud of the continued and record-setting improvement in our graduation rate," said Ray Anderson, vice president of University Athletics.  "Results measured by both graduation and competitive successes are keystones to defining the Sun Devil way.  The student-athlete is the centerpiece of our department's efforts. Jean Boyd, his staff, and the coaches not only teach leadership, risk-taking, and teamwork, but also complement the invaluable academic growth gained from the classroom."

ASU’s women’s GSR is 90 percent, up one point from a year ago, while the men’s teams are over 70 percent (79 percent) for the third year in a row since the reporting began 11 years ago. The men’s GSR has improved from 56 percent in 2005. ASU shines in graduating African-American student-athletes, ranking second in the Pac-12 in both overall and in the African American male GSR.

ASU ranks fifth in the Pac-12 Conference (out of 12 institutions), just one percentage point behind Washington’s 85 percent, and two percentage points behind second place.

Over the past seven years, the baseball program has elevated its GSR from 30 percent to 87 percent, while the men’s basketball GSR has improved from 31 percent to 90 percent over the last eight years.

“Sun Devil Athletics is dedicated to developing student-athletes who graduate and go on to live championship lives,” said Jean Boyd, senior associate athletic director of Student-Athlete Development. “Reaching an all-time high of 84 percent speaks to this commitment. We are especially proud of our work with our female and African American student-athletes. We also highlight the continued improvements made in men’s basketball and baseball. We will remain relentless in these efforts and look forward to reaching a short term goal of 85 percent and ultimately our targeted 90 percent.”

The GSR is the NCAA's more comprehensive calculation of student-athlete academic success. The NCAA rate is more accurate than the federally mandated methodology because it includes incoming transfers and students enrolling in the spring semester who receive athletic aid and graduate and deletes from the calculation student-athletes who leave an institution and were academically eligible to compete. The federal rate does neither.

Conversely, the APR, or Academic Progress Rate, is a year-by-year gauge of eligibility and retention for Division I scholarship student-athletes that was established in 2004. It is a composite team measurement based upon how individual team members do academically, and the NCAA APR threshold is 925, which is the equivalent of a 50-percent graduation rate.

This is the 25th release of institutional graduation rates since national "right-to-know" legislation was passed in 1990. In 2005, the NCAA Division I Committee on Academic Performance implemented the initial release of the team GSR data.