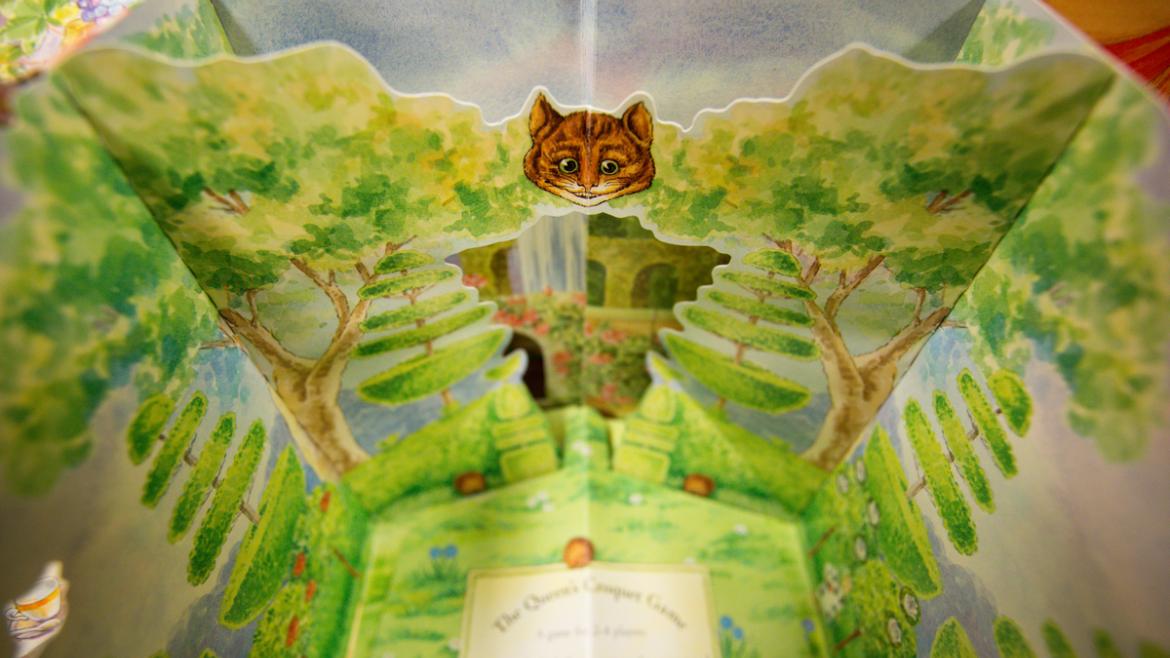 Tempe campus
Peer into the rabbit hole with these many visions of "Wonderland."
ASU home to the many interpretations of Alice and her "Wonderland."
November 3, 2015

“And what is the use of a book,” asked Lewis Carroll’s Alice, moments before tumbling down the rabbit hole, “without pictures or conversations?”
— from “Alice’s Adventures in Wonderland”

Since its publication in 1865, more than 300 artists have created their own versions of the images and words in Alice’s eponymous adventure.

The collection will be on display at the 10th annual Emeritus College Symposium on Nov. 7 in ASU’s Old Main building, which will celebrate the sesquicentennial of “Alice in Wonderland” by featuring a range of experts presenting on the breadth of Carroll’s influence. The event is open to the public.

Speakers include faculty associate Lou-ellen Finter’s photography of the American Southwest “through the Looking Glass”; astronomy and physics professor emeritus Per Aannestad on the connection between black holes and the Cheshire Cat’s grin; ASU Foundation CEO Rick Shangraw on “The Wonderland of ASU”; professor of supply chain management Craig Kirkwood on the digitization of the Alice books; and English professors emeriti Alleen Nilsen and Don Nilsen, who are compiling lists of the ways “Alice in Wonderland” was a zeitgeist in the 1960s and 1970s and continues to persist in popular culture. 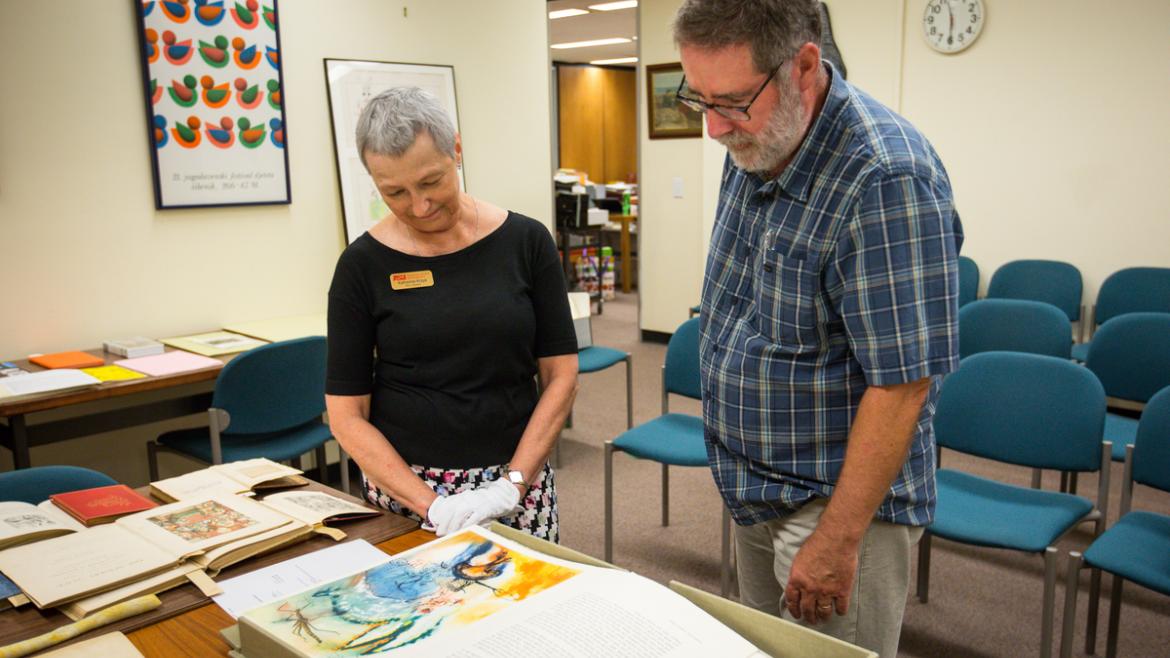 “These books are so rich they offer so many opportunities for generating a wide variety of meanings,” said associate professor of EnglishThe Department of English at ASU is part of the College of Liberal Arts and Sciences. Dan Bivona, who taught Carroll’s books in his classes and is researching Alice’s relationship to Wonderland’s creatures in connection with the Turing test, which determines a machine’s ability to exhibit human behavior.

The mutability of the Alice stories is in part because of Carroll’s sparse text, which allows for creative interpretation. “If you don’t know what a Gryphon is, look at the picture,” he wrote in chapter nine, relying on the book’s illustrations to fill gaps in its text.

Each redesign has an effect on how the work is received, said art professor emeritus John RisseeuwJohn Risseeuw is printmaking faculty emeritus in the School of Art in the Herberger Institute for Design and the Arts..

Risseeuw spent 35 years teaching ASU students printmaking and the history of the book. He showed his classes the library’s different editions of “Alice’s Adventures in Wonderland” to demonstrate varying approaches to illustrating the text or creating images to complement it.

An example he used was Carroll’s “Mouse’s Tale,” one of the first instances of concrete poetry, in which the visual nature of the text represents the concept that is written within — in this case, a long tale told by a mouse and printed in a winding, tail-like pattern. “The interesting thing is that in every edition of ‘Alice’ this has to be done by the typesetter, and it’s always done differently,” Risseeuw said. 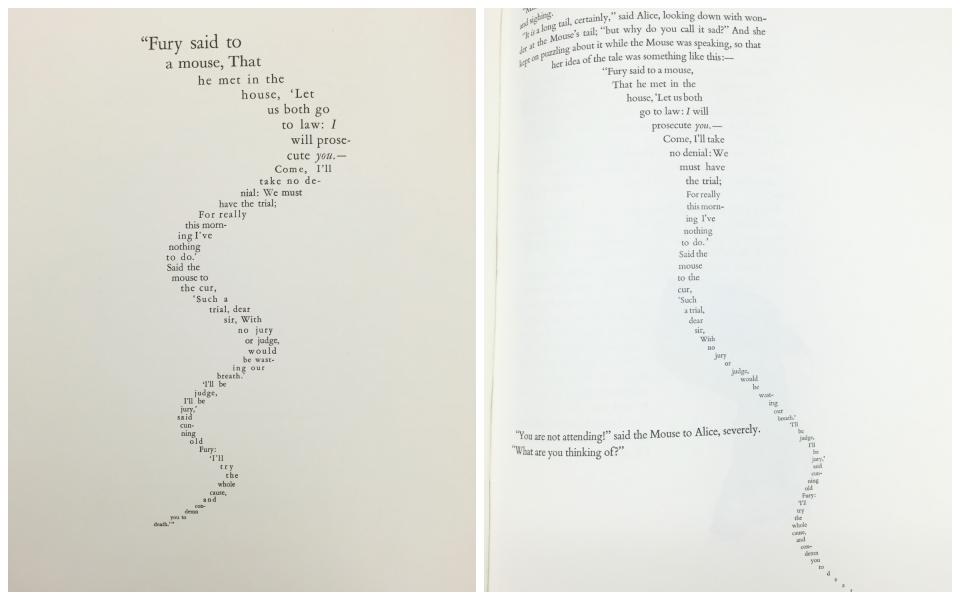 Two versions of "Alice in Wonderland’s" long tale include a 1907 edition illustrated by Arthur Rackham and Barry Moser’s 1982 interpretation.

Nearly every edition of Alice in Wonderland — including many theatrical scripts — contains the tail tale.

Another commonality in many of the publications is their pictures’ resemblance to Tenniel’s originals.

“Tenniel is so good,” said Don Nilsen. “He did it so well. He captured the tone, and it was a very effective tone.”

Tenniel, the principal artist at the British weekly satire magazine Punch, spent more than a year perfecting his drawings for the book. His subtle inclusion of political allusions is often cited as a reason for Alice’s instant and enduring popularity among adult readers.

“What Tenniel did, in one way, is to make it so that people can never think about, say, the Mad Hatter, without imagining this guy without that big top hat,” Risseeuw said. “Whereas if you read the text without seeing that, your imagination makes up an image for the Mad Hatter. … So an illustrator actually takes something away from the reader — prevents their imagination from taking the story where they would imagine it and expand upon it, perhaps.”

Katherine Krzys, curator of the Child Drama Collection and archivist at ASU, recurrently found copies of Tenniel’s illustrations alongside directors’ designs for dramaturgical productions. “I was surprised at how much carryover there was between the different versions,” she said. “There’s a lot of Tenniel, but different interpretations of it.”

According to Risseeuw, part of the challenge for visual artists commissioned to portray Alice in a new way is to “put their own thing into it.” He points to Dali’s suggestive, semi-abstract visuals as a departure from the more traditionally definitive illustrations of Arthur Rackham, Peter Newell, Moser and others.

Undeterred, new copies are continuously issued, and a handful of 150th anniversary editions are being released this year.

“It’s all comparative,” Risseeuw said. “It isn’t that there’s one that stands out or that is better than the others. They’re all good by comparison to each other. They enrich each other.”

Registration to attend ASU in Wonderland: The Tenth Annual Emeritus College Symposium, is available at http://asura.wildapricot.org/Resources/Events/TemplatesForms/2015EmeritusCollegeSymposiumRegistration.pdf. The program runs from 8:30 a.m. to 2:30 p.m. on Saturday, Nov. 7, and will be followed with a free Mad Hatter’s Tea Party from 2:30 to 3:30 p.m. in Old Main’s Carson Ballroom. Both events are open to the public.

ASU’s special collections, including its editions of Alice’s Adventures in Wonderland, can be viewed in the Luhrs Reading Room during the school year from 9 to 6 p.m. on weekdays and by appointment on Saturdays. The reading room is located on the fourth floor of the Hayden Library, and a staff member is always available to help locate materials. ASU Libraries invites classroom visits and scholarly research. To learn more, contact 480-965-4932. Aspects of the exhibit can also be viewed here. 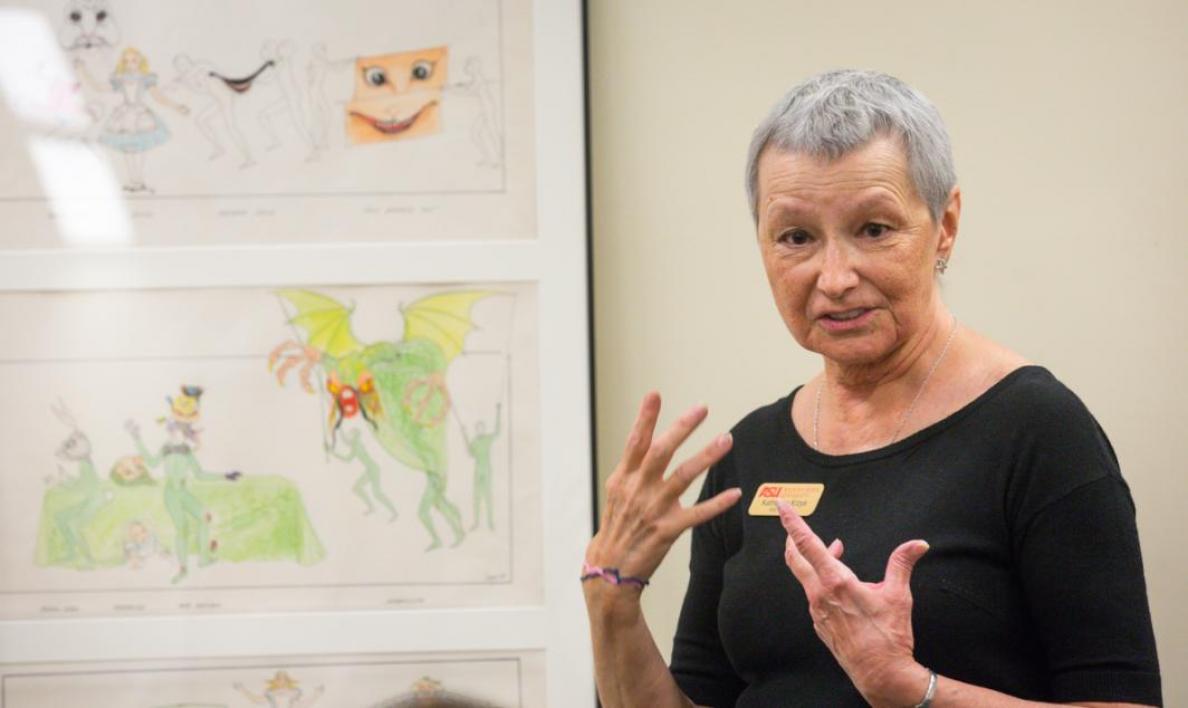 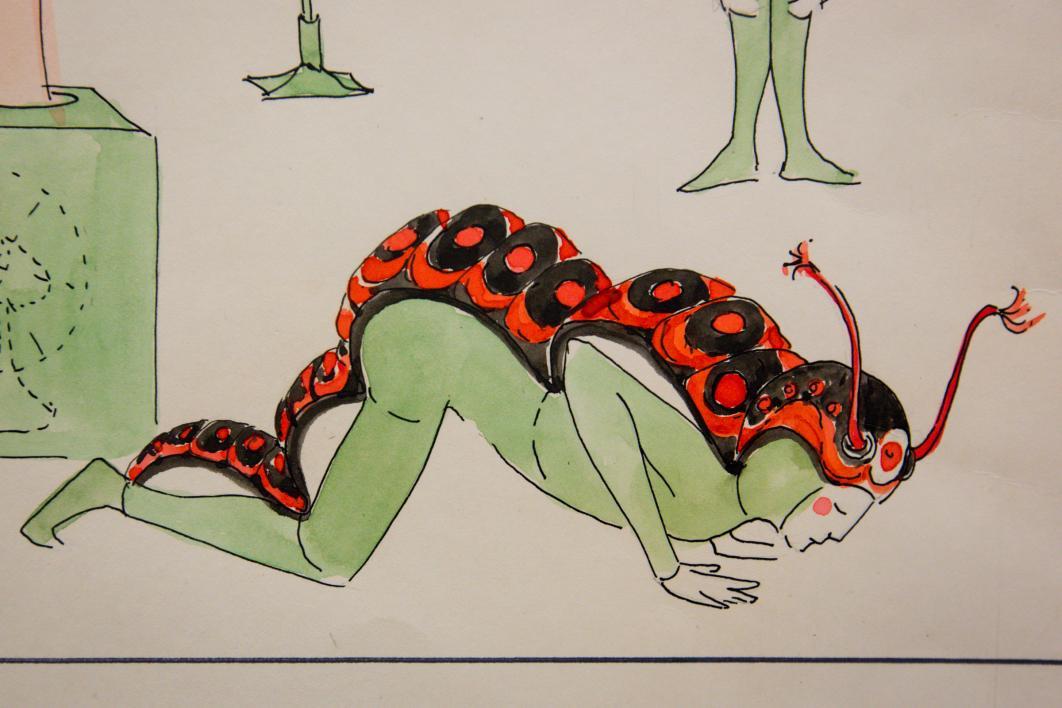 Detail of the caterpillar costume drawn by Irene Corey for productions of Lewis Carroll's "Alice's Adventures in Wonderland." 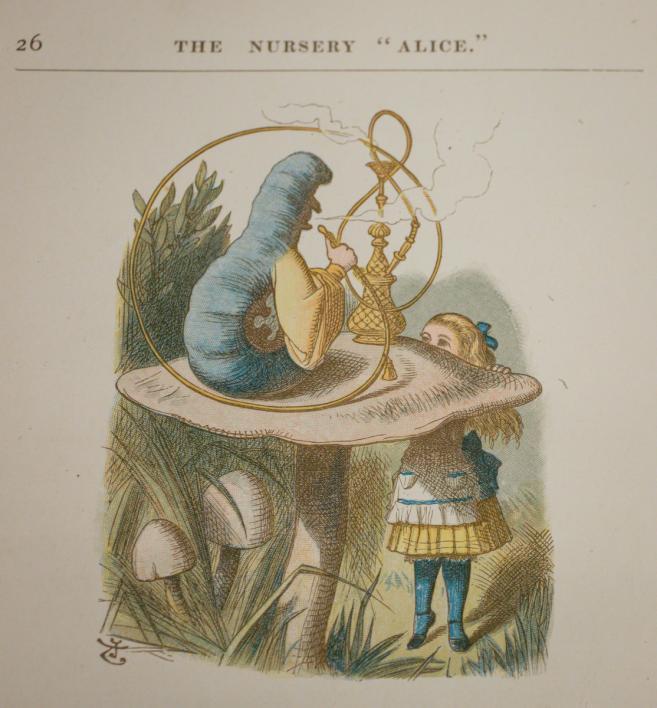 Detail of John Tenniel's illustration of the caterpillar and the hookah — in Hayden Library's collection of Lewis Carroll's "Alice's Adventures in Wonderland" and its sequel "Through the Looking-Glass." The library has an extensive collection that is available to the public for viewing. 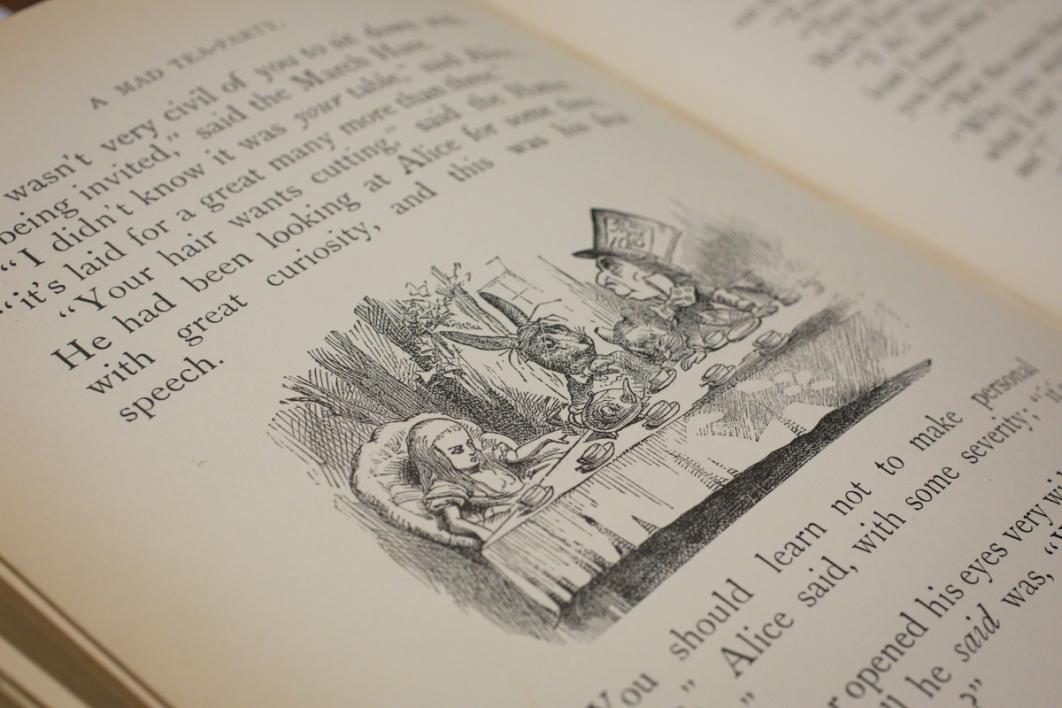 Detail of John Tenniel's illustration of the Mad Tea Party — in Hayden Library's collection of Lewis Carroll's "Alice's Adventures in Wonderland" and its sequel "Through the Looking-Glass." 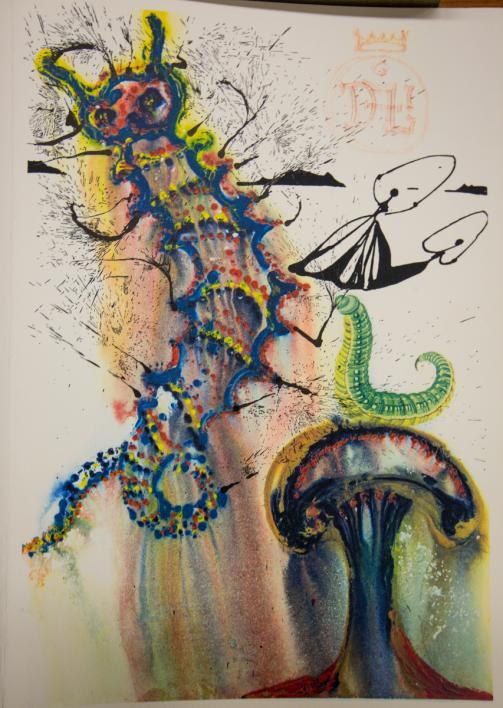 Detail of Salvador Dali's "Advice from a Caterpillar," part of Hayden Library's collection of Lewis Carroll's "Alice's Adventures in Wonderland" and its sequel "Through the Looking-Glass." First-generation students make their own way at ASU

His shift ended a while ago, but Victor Seca-Diaz is still hanging around the Sun Devil Fitness Complex on Arizona State University’s West campus.For Seca-Diaz, it’s no big deal to be there when he’s off the clock; he just likes being around people, he says, especially when he’s in a position to offer assistance or guidance. But it took him some time to figure that out.Though he describes ... 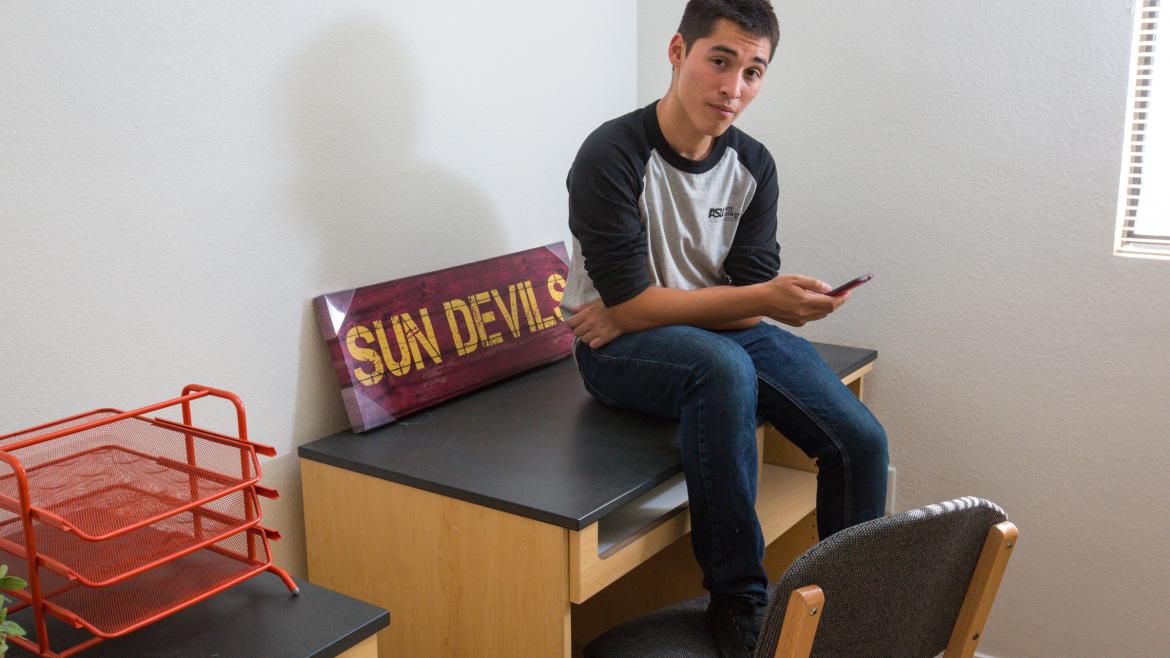 First-generation students make their own way at ASU

West campus
Being the first in your family to attend college can be scary — but not at ASU.
First-gen students at ASU praise TRIO STEM in helping them get established.
ASU sophomore to fellow first-gen students: "Stop. Breathe. It'll be alright."
November 3, 2015

His shift ended a while ago, but Victor Seca-Diaz is still hanging around the Sun Devil Fitness Complex on Arizona State University’s West campus.

For Seca-Diazpictured above; photo by Charlie Leight/ASU Now, it’s no big deal to be there when he’s off the clock; he just likes being around people, he says, especially when he’s in a position to offer assistance or guidance. But it took him some time to figure that out.

Though he describes himself as “very studiousHe was accepted to Yale, among other schools. ," as the younger of two brothers in a single-parent household and the first member of his family to attend college, Seca-Diaz initially felt like he was “flying blind” when he began his freshmen year at ASU's West campus in fall 2014.

“The minute my mom left and the door in my dorm shut, I freaked out. I was like, ‘I have no idea what to do. What’s going on? I know absolutely no one here,’” recalled the psychologyThe School of Social and Behavioral Sciences at the New College of Interdisciplinary Arts and Sciences offers a BS and a BA degree in psychology. sophomore.

Fellow psychology major and first-generation student, freshman David Rodriguez, had similar worries. Also from a single-parent household, going to the West campus allowed him to stay close to his family in order to continue helping out at home — but it also meant a lot more work than he was used to.

“The step from high school to university was extremely overwhelming. I was emotionally distressed and was struggling to get four hours of sleep per night due to my work schedule,” Rodriguez said.

Both students attribute the smaller, liberal arts college-feel of the West campus to helping them feel more at ease during their first year of college.

“At West campus in particular, I really found a lot of help within my dean of students’ office,” Seca-Diaz said. “You always see [people from the office] around campus, they are always actively engaged with the students. Being a smaller campus, they know everyone by first name.”

Later on, he discovered TRIO Student Support Services STEMSTEM stands for science, technology, engineering and mathematics. (TRIO SSS STEM), a federally funded program that provides targeted services and assistance to first-generation students, low-income students and students with documented disabilities who are majoring in STEM fields at the West campus.

“Without [the TRIO SSS STEM program], I probably would have been completely lost,” Seca-Diaz said.

Chappell had also participated in Upward Bound during his college application process.

And though Rodriguez did not participate in any such programs, he found that he was able to work things out on his own.

“After a few weeks, I had established a routine and now I’m able to function somewhat normally during the day. However," he said. "I still find my schoolwork to be challenging as I am a BarrettBarrett, the Honors College at Arizona State University is a selective, residential college that recruits academically outstanding undergraduates across the nation. student.”

His advice to other first-gen college students is simple: “Find a routine that fits your daily life, and make sure you make time for relaxing as it keeps you sane.”

For Seca-Diaz, reflecting on his positive experiences after an uncertain start inspired him to pay it forward; so he became a student orientation leader, a New College peer mentor and also became involved in West campus’ Residence Hall Association, where he currently presides as the director of public relations.

He too has some advice for first-gen students.

“Stop. Breathe. It’ll be alright,” he said. “You don’t have to do everything in one day. College is a marathon, not a sprint.”