New ASU research shows the critical role relationships have in keeping a mother happy, healthy and able to give of herself

A mother is the tireless supporter of her family, very often setting aside her own needs to tend to her children's, a task that knows no schedules or time limits.

But who supports Mom?

Two Arizona State University researchers looked into what factors bear the biggest impact on keeping a mother psychologically healthy, and they say unconditional acceptance by friends and authenticity in relationships play essential roles in keeping Mom happy — and thus grounded in her tasks with child-rearing and development.

In what is described as the first known study to delve into the phenomenological experience of motherhood, Suniya Luthar, a Foundation Professor of psychologyThe Department of Psychology is a unit of the College of Liberal Arts and Sciences. at ASU, and post-doctoral research associate Lucia Ciciolla asked more than 2,000 well-educated, upper-middle-class mothers what factors helped them cope with motherhood. This group, the researchers said, is increasingly described as being at “high risk” for parenting stress, because over time, they have come to spend vastly greater number of hours per week on children’s activities and commitments, as compared with well-educated fathers and less-educated mothers.

In “Who mothers mommy? Factors that contribute to mothers’ well-being,” published in the early online issue of Developmental Psychology, Luthar and Ciciolla said that four factors (out of seven) stood out as main contributors to helping Mom’s equanimity of spirit and keeping distress at bay. They are unconditional acceptance, feeling comforted when needed, authenticity in relationships and friendship satisfaction.

The authors reported that being married was not related to mothers’ psychological well-being; more significant was the quality of the marriage. And even when women were satisfied with their partners, there were powerful effects for the quality of women’s relationships.

“Relationships with spouses are important but clearly not determinative to a mother’s well being,” Luthar said. “Our findings show the strong potential protective power of other close relationships — satisfaction with the frequency of visiting with friends had significant unique associations with all seven adjustment outcomes.”

Luthar’s work on this study is a by-product of her more than 25 years of work on resilience among children facing adversities. Resilience researchers have found that the single most powerful “protective factor” for kids is having a strong, supportive bond with the primary parent.  As mothers are typically primary parents — across socioeconomic strata — Luthar is now deliberately focused on trying to unravel what best helps mothers themselves to function well.

“Developmental science is replete with studies on what moms do and do not do, what they should do and should not do,” she says, “but there is almost no attention to what might mothers need to negotiate the inevitable challenges in sustaining ‘good enough parenting’ across decades.”

One goal of the study, Luthar said, was to test the stereotype that mothers today are excessively invested in their children, as embodied in the phrase “helicopter parents.” There was no support for this stereotype in the study findings.

“Our results yield little support for views that as a group, upper-middle-class mothers’ well-being is primarily tied to their investment in their children and their roles as parents, and instead, suggest far stronger ramifications for feelings of being personally supported,” Luthar said. “Women’s adjustment status did co-vary with how they felt in their roles as mothers but also showed equivalent if not vastly stronger variation with the emotional support in their everyday lives.”

“These findings are extremely encouraging in showing the strong protective potential of close, authentic relationships in buffering women through the myriad challenges of motherhood."
— Suniya Luthar, Foundation Professor of psychology at ASU

What exactly does the notion of support mean in this study, and how is it different from what has been conventionally studied in psychology? Luthar explained that this is best captured by two simple phrases that one might instinctively see as relevant for children but not for highly accomplished, well-educated women:

“I feel seen and loved for the person I am at my core,” and “When I am deeply distressed, I feel comforted in the way I need it.”

Highlighting parallels between the needs of children and their mothers who tend to them, Luthar said, “just as unconditional acceptance is critical for children, so it is critical for mothers who must provide it. Mothers, like children, benefit greatly when they know they have reliable sources of comfort when in distress.”

Findings of this study also have direct implications for interventions.

“These findings are extremely encouraging in showing the strong protective potential of close, authentic relationships in buffering women through the myriad challenges of motherhood,” Luthar said. These findings have been harnessed at the core of a supportive intervention she is testing with physician mothers in a collaboration with the Mayo Clinic in Arizona.

Why physician mothers in particular? Because they are at risk for high levels of stress.

“We know well that motherhood is a difficult task for women in general,” Luthar said. “For these physician moms who are generally caregivers at home and at work — with the stakes often very high at work — there is no question that stress levels can get high. Hence the impetus to implement a three-month program of support groups, called Authentic Connections.”

Recognizing the need for and potential value of such support groups, the Mayo Clinic has granted all physician mothers one hour of free time to attend the groups. Two groups were successfully conducted in the spring of 2015 and three more are underway.

As the empirical findings from the “Who Mothers Mommy” paper lends strong support to the central conceptualization of the Authentic Connections groups, Luthar hopes to expand her program for mothers across different community and professional settings. “Over time,” she concludes, “it is my earnest wish that women can commonly come to prioritize, and to regularly receive themselves, the steadfast love and care that is uniquely associated with the term 'mothering.' ”

ASU innovation knows no bounds.In 1994, the university met a high standard of criteria that propelled it to a Research 1 school, and over the years it has achieved everything from making equipment for the Mars landing to finding a human genus jawbone that’s more than 2.8 million years old. After two decades it was time to celebrate these achievements. On Tuesday, ASU President Michael Crow an... In 1994, the university met a high standard of criteria that propelled it to a Research 1 school, and over the years it has achieved everything from making equipment for the Mars landing to finding a human genus jawbone that’s more than 2.8 million years old.

After two decades it was time to celebrate these achievements.

On Tuesday, ASU President Michael Crow and Sethuraman “Panch” Panchanathan, who leads ASU’s Office of Knowledge Enterprise Development, thanked faculty and celebrated the impact of excellence at ASU at the Legacy of Discovery reception.

Crow claimed ASU’s new standard was in thanks to its progressive staff.

“I never encountered, or met, a faculty willing to do the things that you are willing to do, and able to do," Crow said. “And that is to stay committed, and stay true, to the fundamental purpose of teachers while simultaneously progressing your research and creativity towards success.”

ASU was granted Research 1 school status in 1994 from the Carnegie Foundation for the Advancement of Teaching. This placed the university among a select group who produce a great volume of quality work. In order to achieve this status, a university must offer a full range of baccalaureate programs, give a high priority toward research, award 50 or more doctoral degrees each year and receive $40 million or more annually in federal support.

Panchanathan showed his appreciation with direct praise and presented two videos, which hosted a timeline of every great milestone from the beginning of 1994 to present day.

“These amazing accomplishments that have been achieved at ASU through research and support have created impact, and most importantly, a legacy,” Panchanathan said. “We are now recognized as the most innovative university in the United States.” 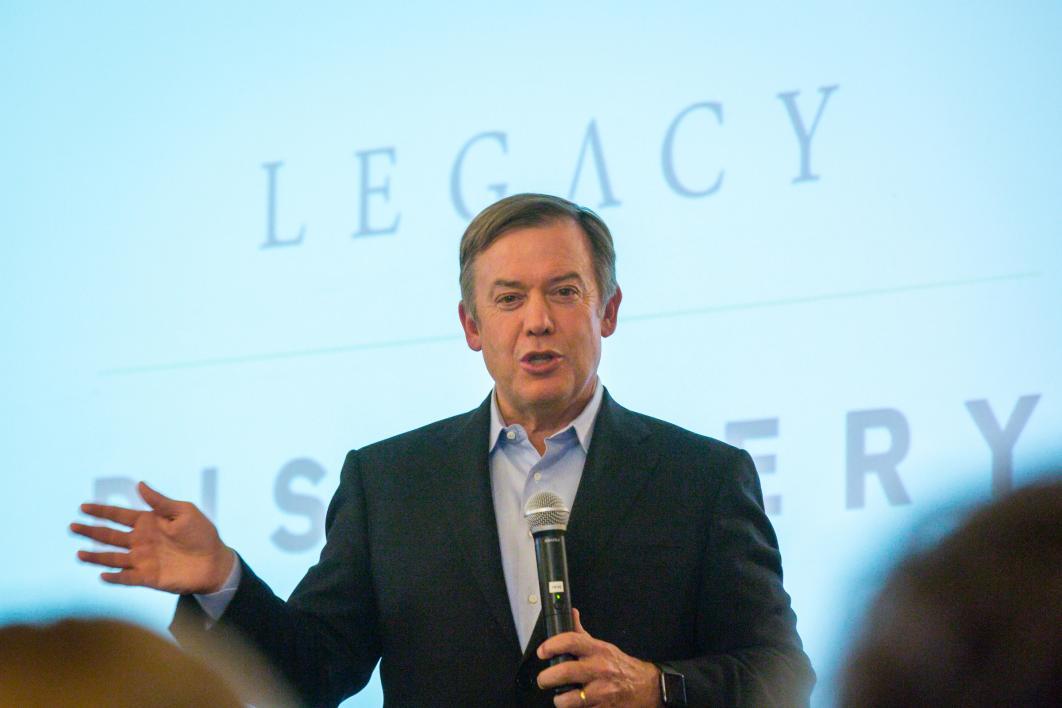 ASU President Michael Crow acknowledges the university's faculty and researchers at the Legacy of Discovery reception in Old Main on the Tempe campus Oct. 27. Two decades ago, ASU had minimal funding for research, and most recently it had more than $426 million. 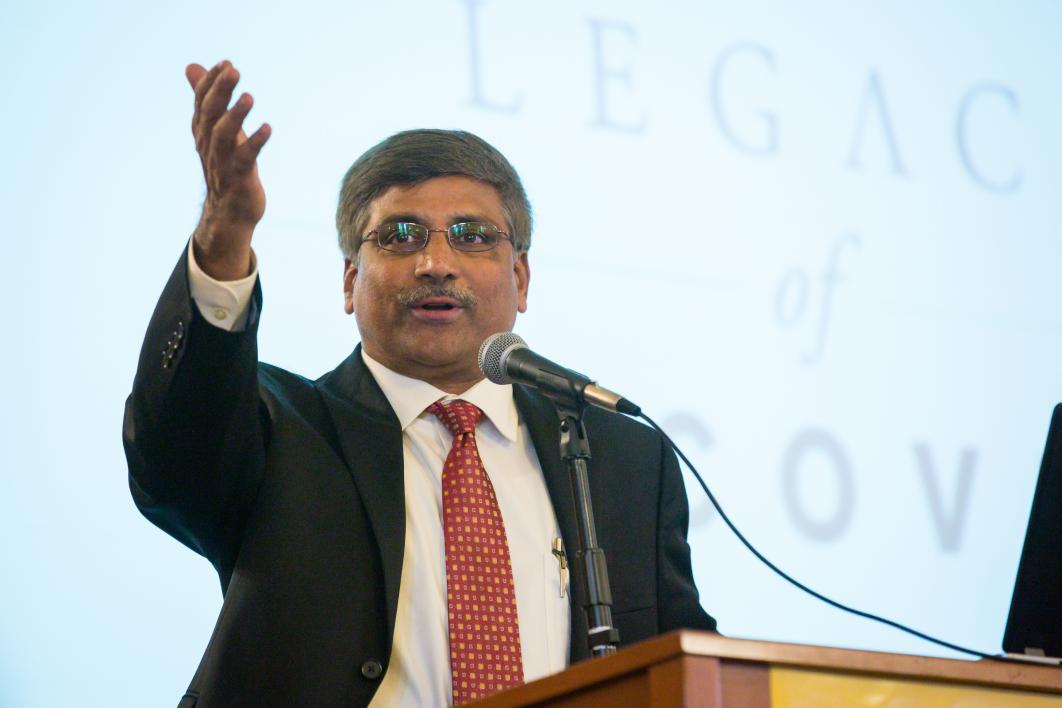 Sethuraman "Panch" Panchanathan, senior vice president of the Office of Knowledge Enterprise Development, congratulates the professional accomplishments of ASU faculty at the Legacy of Discovery reception. 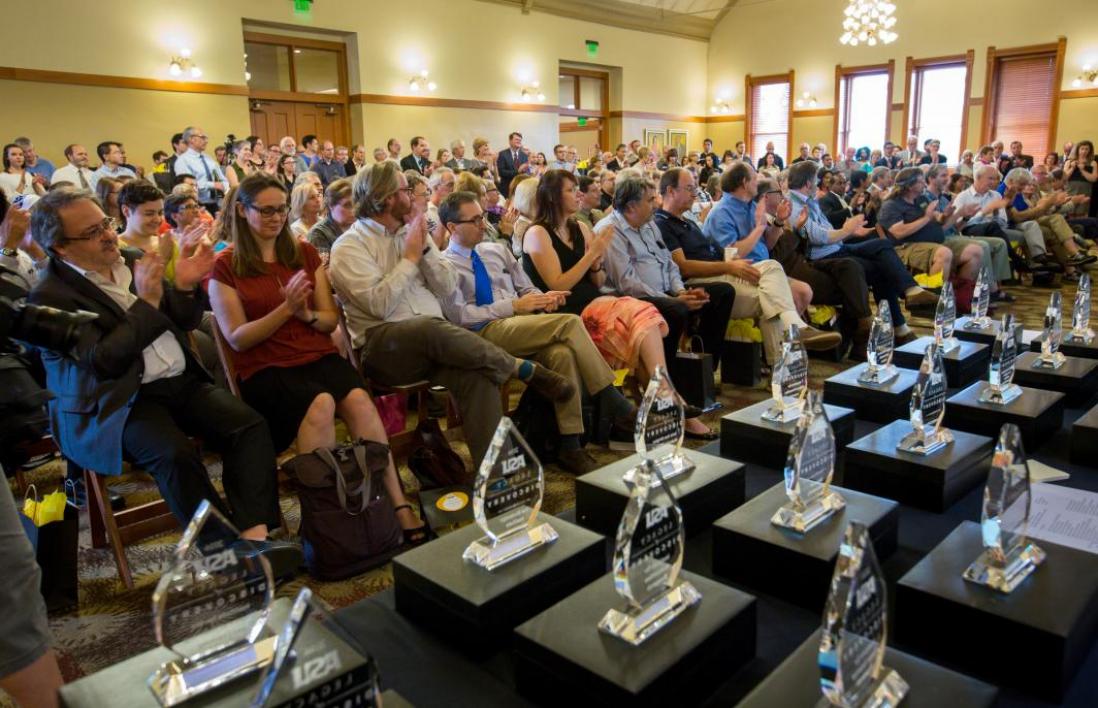 More than 300 faculty and staff attend the Legacy of Discovery reception honoring ASU researchers and their work in Old Main on Oct. 27. 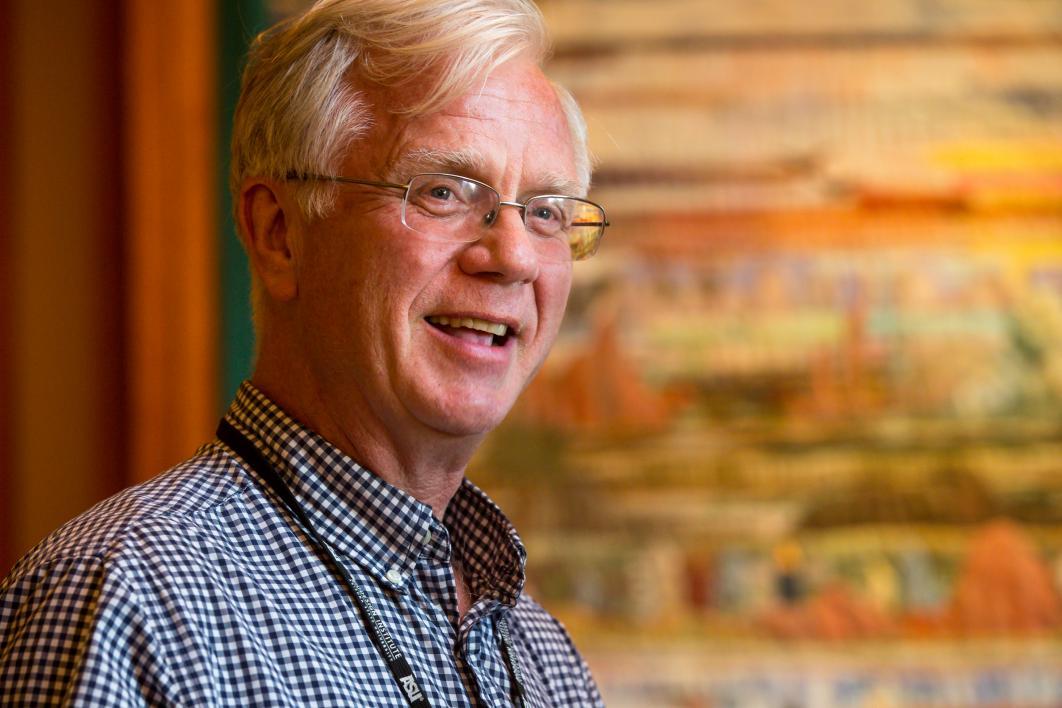 Stuart Lindsay, a Regents' Professor in ASU's Department of Physics and the School of Molecular Sciences (in the College of Liberal Arts and Sciences), talks about his work before attending the Legacy of Discovery reception.

The faculty in attendance shared in the feeling of accomplishment. Stuart LindsayStuart Lindsay is a Regents' Professor in the Department of Physics and the School of Molecular Sciences in the College of Liberal Arts and Sciences., a Regents' Professor since 1979, expressed how much the university has expanded over the course of time, elevating itself to a new standard.

“To see the enterprise, where it started, and to see it not only funded and supported on a much larger scale, but to see it grow to a level of excellence that is just stunning,” Lindsay said. “And if I want to find the best brains in the country to collaborate with, there is a good chance I’ll find it here now.”

After awards were handed out to celebrated faculty, Crow closed the evening with his own personal acknowledgment.

“Today is reflective of you, the success of all of you,” Crow said. “So what I want to say here today, most of all, is thank you.