The Polytechnic campus, located in Mesa on the former Williams Air Force Base, is home to more than 11,000 students exploring ASU’s professional and technological programs. Thousands of square feet of laboratory space make room for project-based learning, from state-of-the-art algae research facilities and flight simulators to leading-edge 3-D metal printers and a consumer behavior research lab. 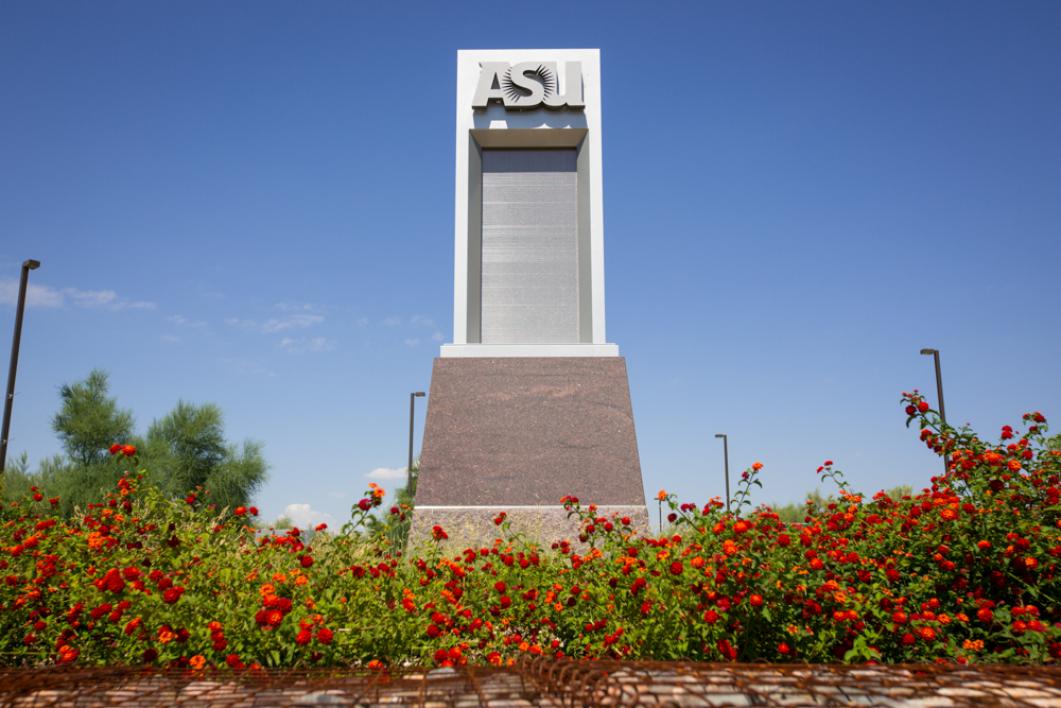 The ASU monument welcomes everyone at the west entrance to the Polytechnic campus in Mesa. 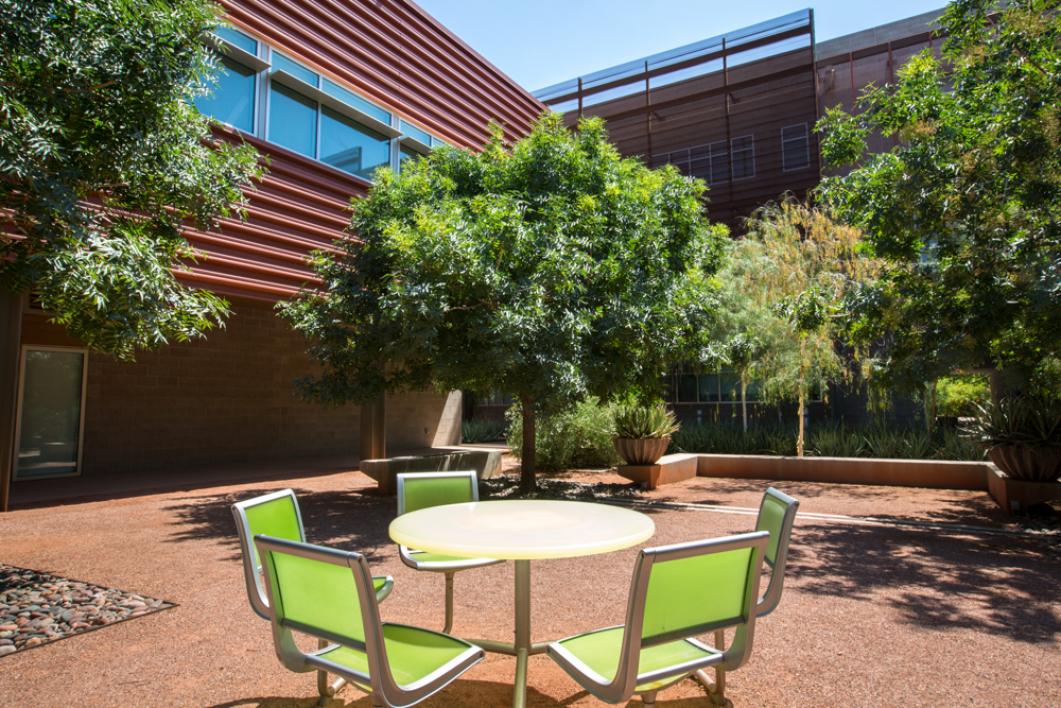 A small courtyard sits between the LEED gold-certified Picacho and Peralta halls, homes to engineering labs and classrooms. 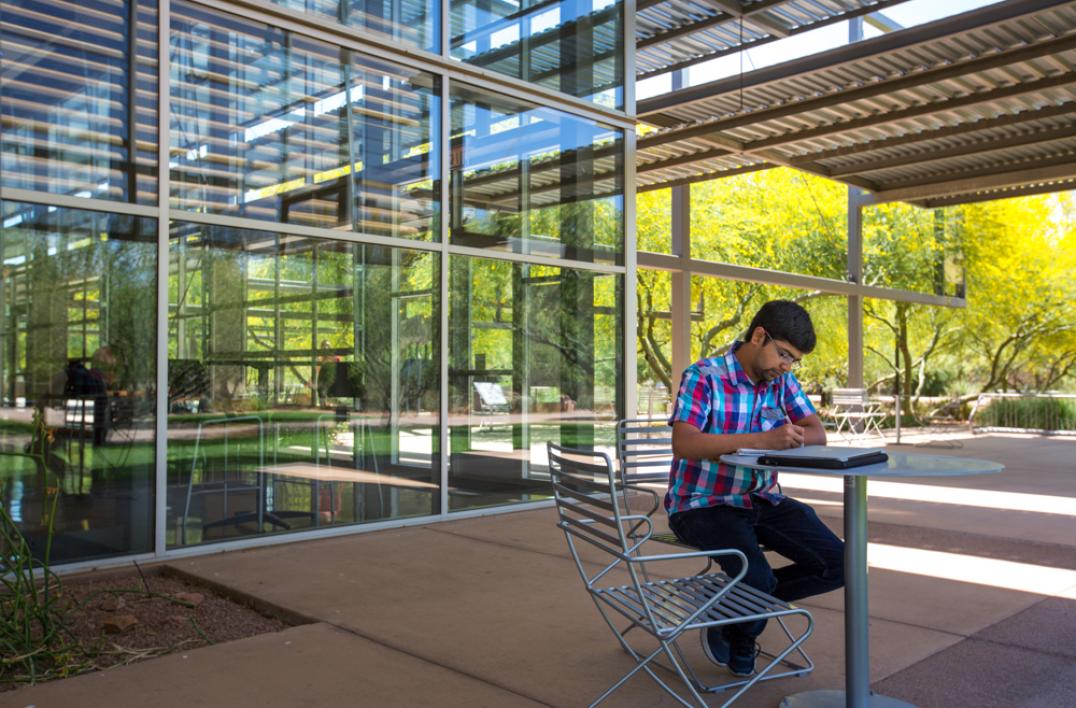 Students can design and build devices at the Automation and Rapid Prototyping Labs. 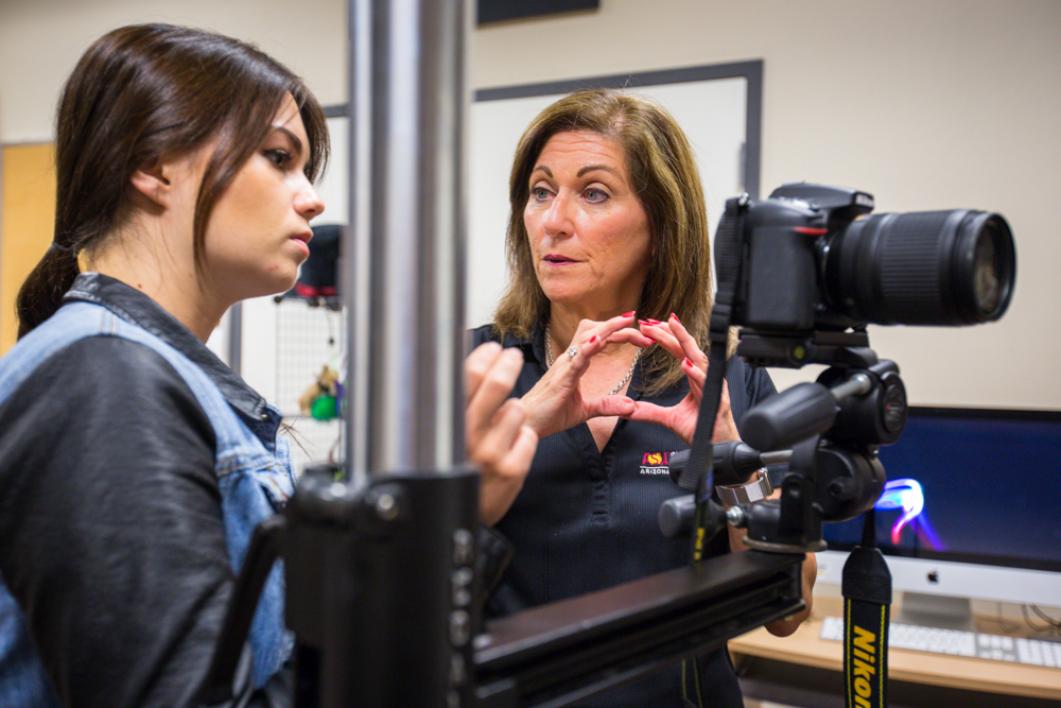 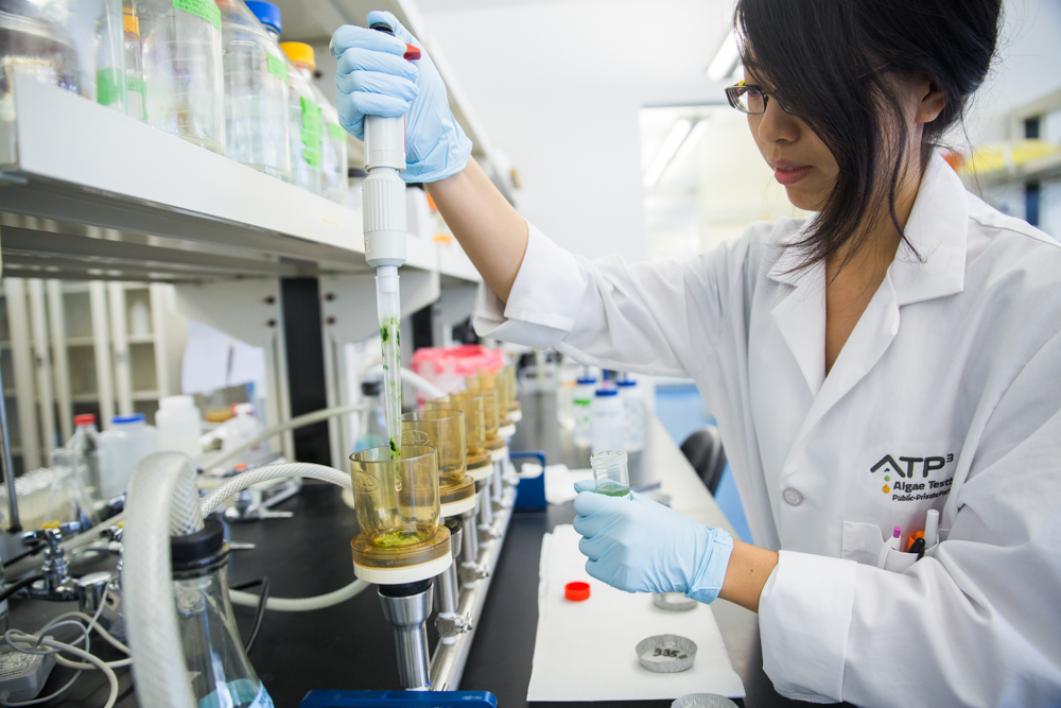 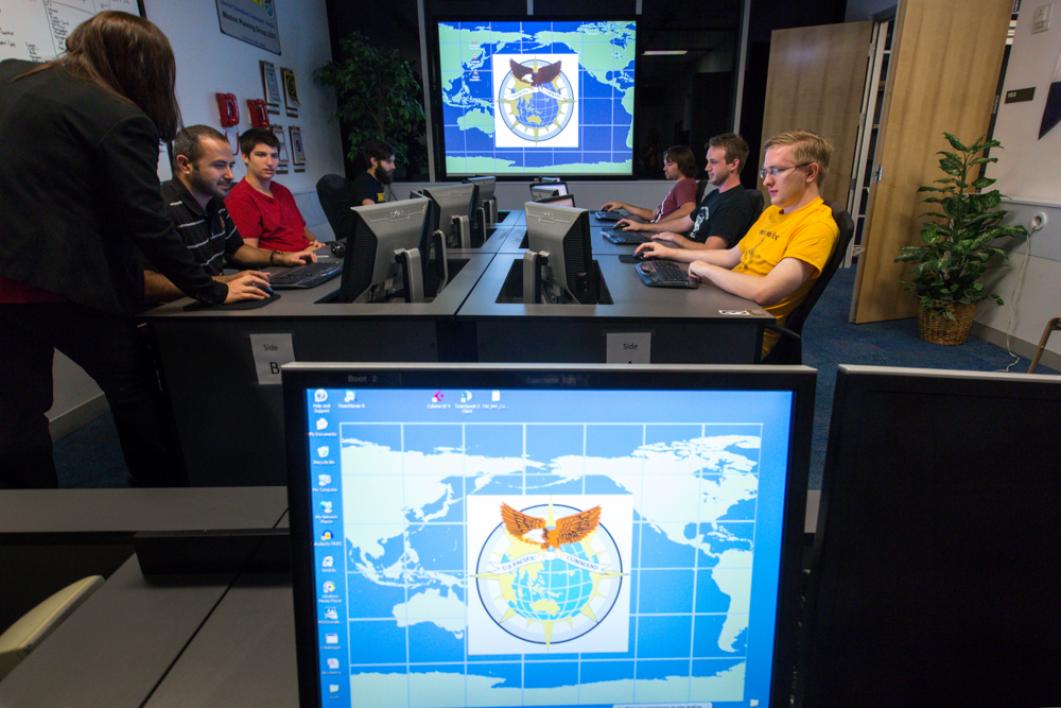 Students are trained in computer security in the Human Services Engineering lab. The lab is part of the Cognitive Engineering Research on Team Tasks lab, which handles a variety of programs including cybersecurity systems, unmanned aerial systems, airport incident command, emergency medicine and more. 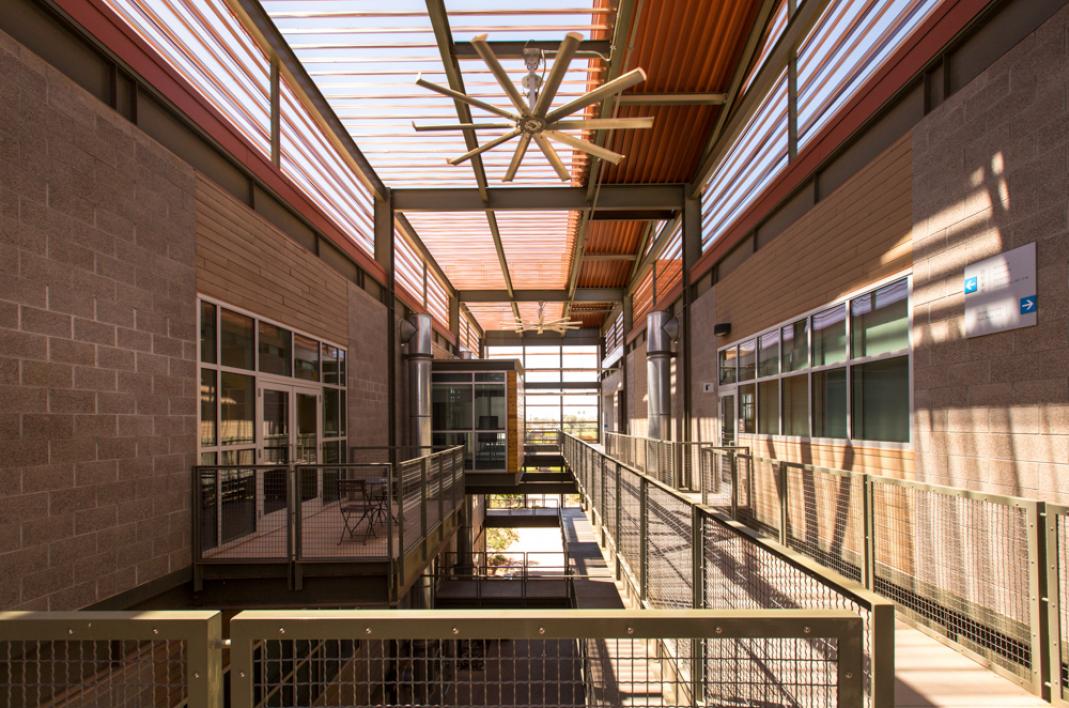 The Engineering and Manufacturing Engineering program offices are based in Peralta Hall. In addition, engineering studios equipped with all sorts of tools allow students to work in teams on projects that help solve technological problems. 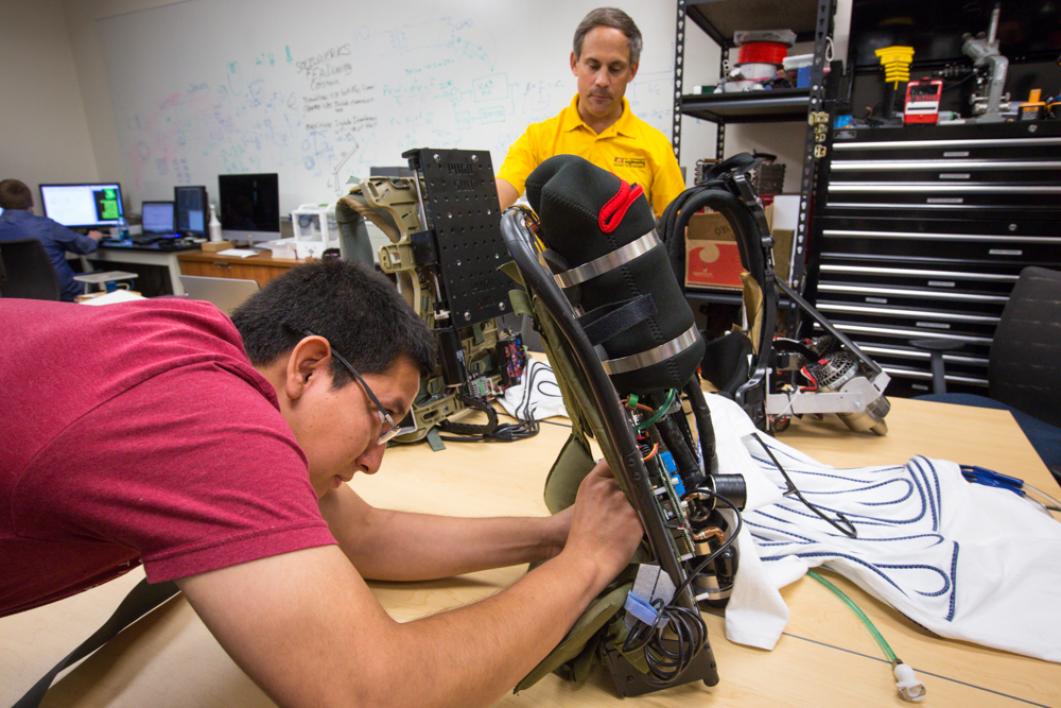 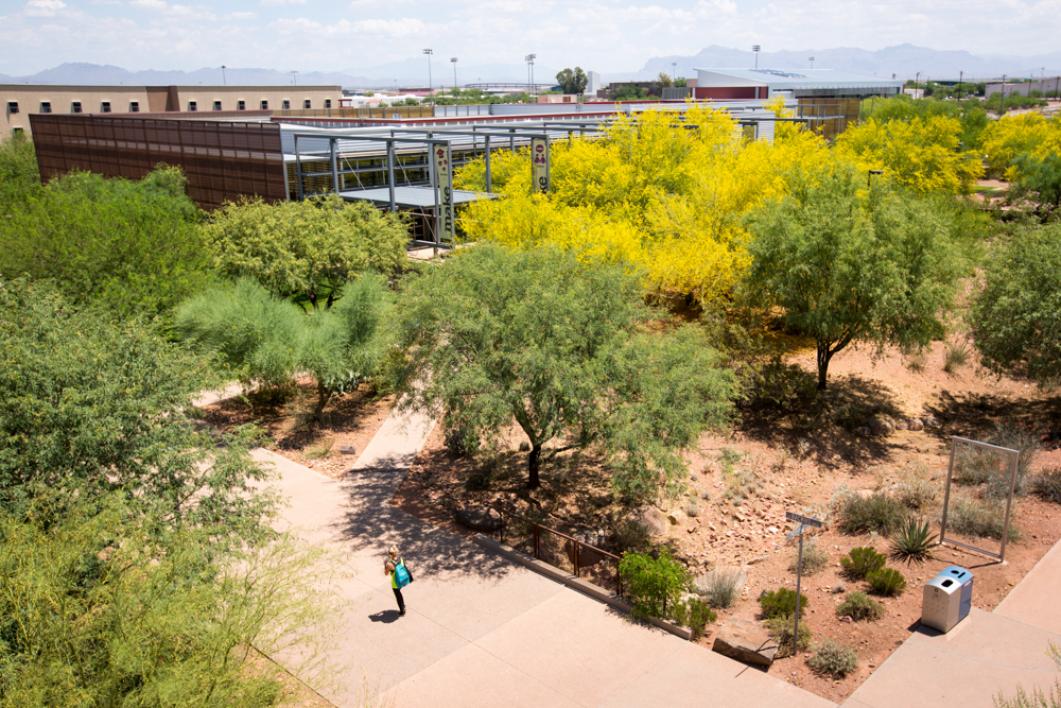 The Desert Arboretum is designed to conserve water and highlight drought-tolerant, native plants. New buildings on campus have been designed to mesh with xeriscape concept. 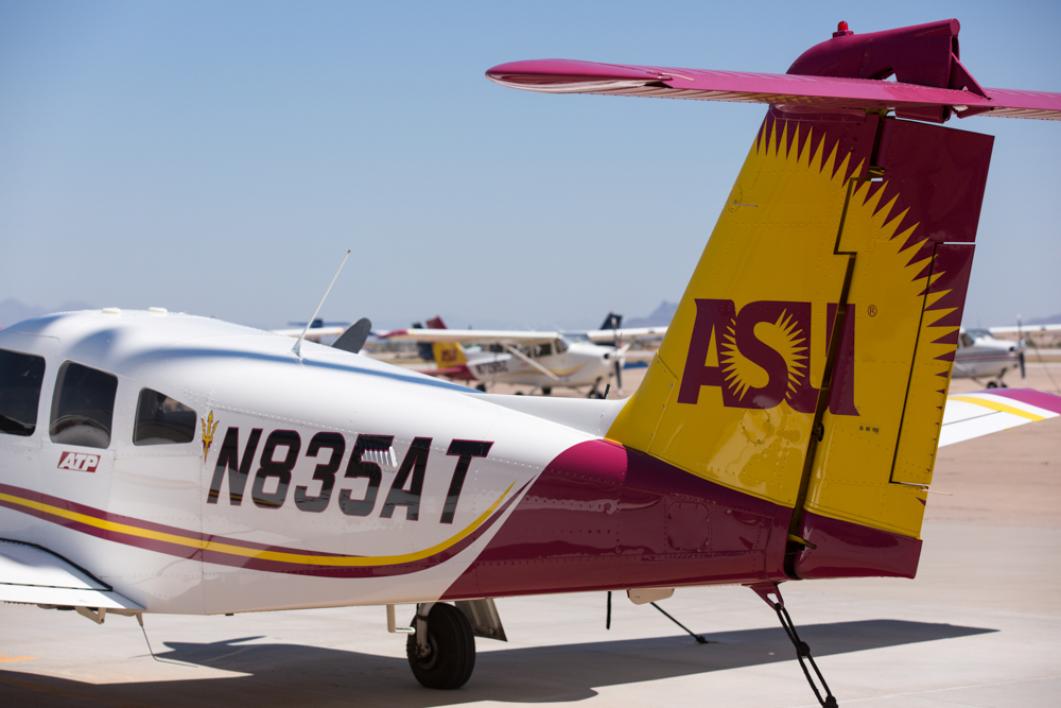 Students can get their training hours in Piper Seminole twin-engine planes and Cessna 172 Skyhawk single engines at the adjacent Phoenix-Mesa Gateway Airport. 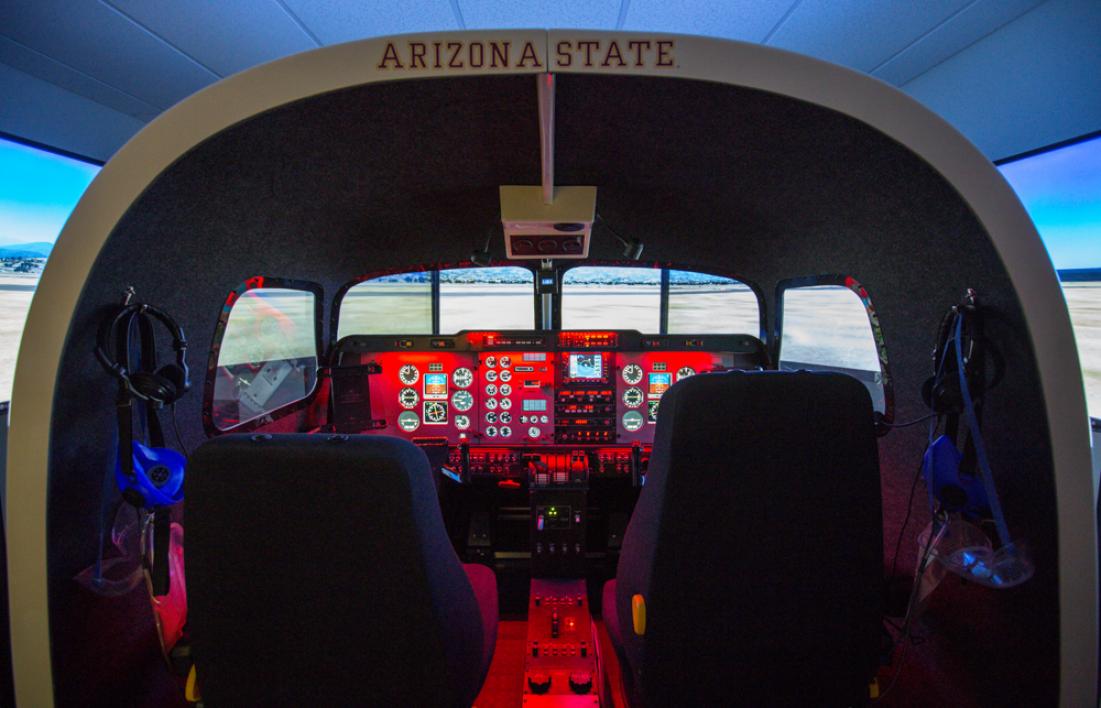 Medium-size ponds circulate cultures of algae as part of the Arizona Center for Algae Technology and Innovation. 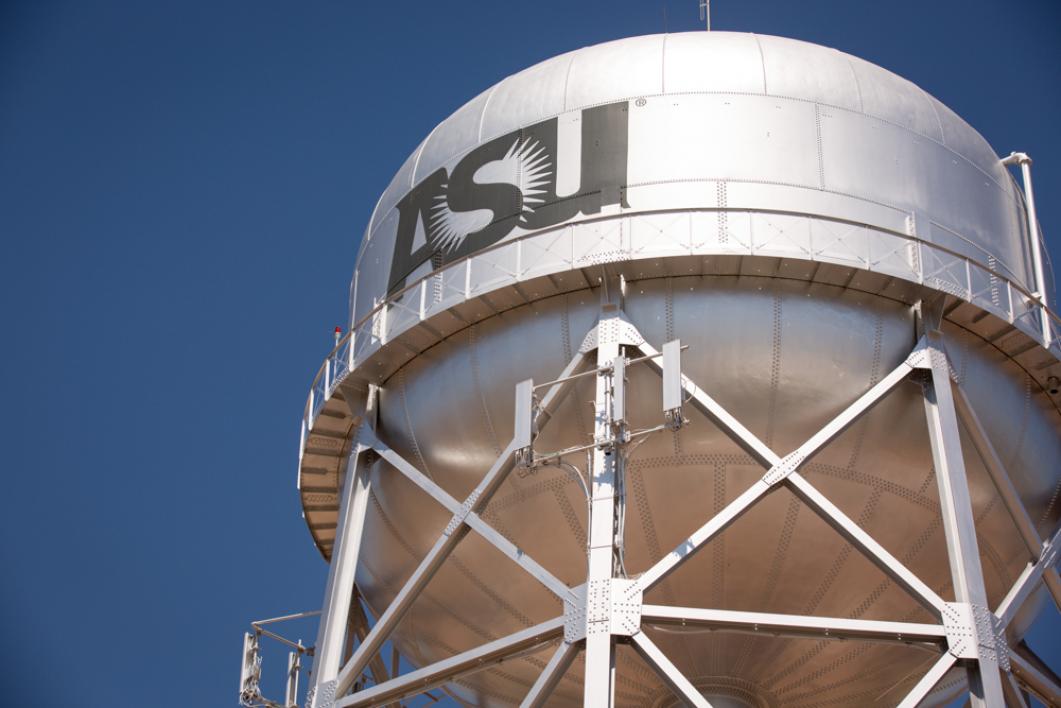 The iconic ASU water tower is on the west part of the Polytechnic campus.

An underwater fossil hoard discovered in the Caribbean has revealed that people have done more to deplete animal species than the shift of the last ice age.A study co-authored by Janet Franklin, Regents’ Professor in the School of Geographical Sciences and Urban Planning at Arizona State University, and published this week in the Proceedings of the National Academy of Sciences deals with the rel... 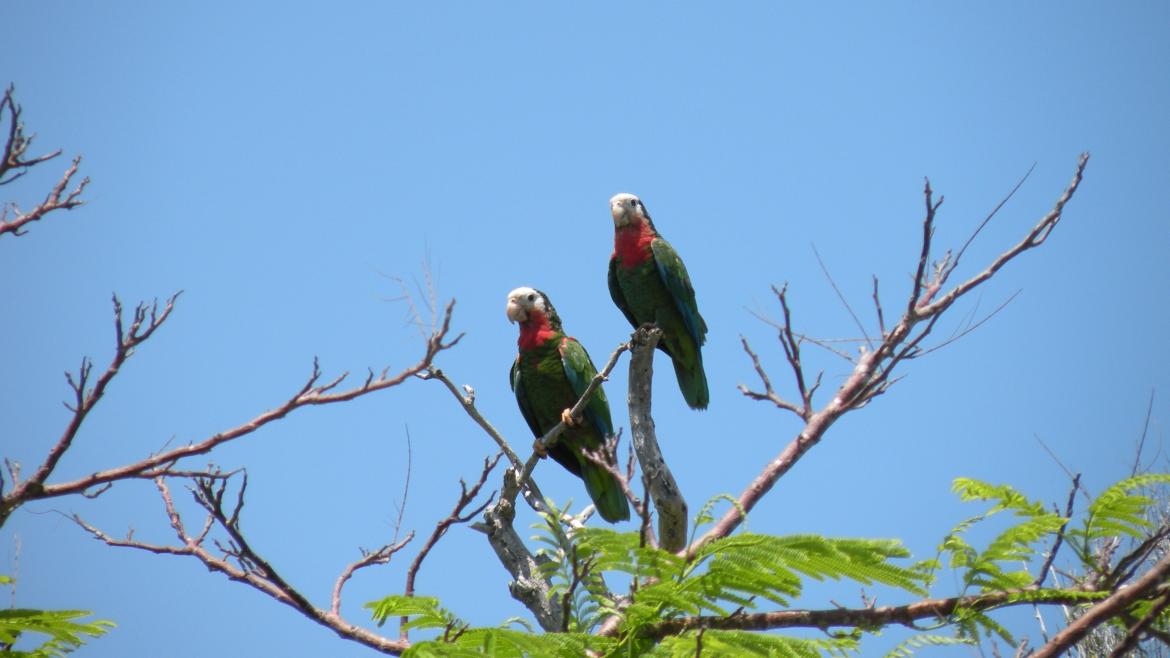 An underwater fossil hoard discovered in the Caribbean has revealed that people have done more to deplete animal species than the shift of the last ice age.

A study co-authored by Janet Franklin, Regents’ Professor in the School of Geographical Sciences and Urban Planning at Arizona State University, and published this week in the Proceedings of the National Academy of Sciences deals with the relative impacts of climate change and direct human activity on animal-species extinction.

Sawmill Sink, a flooded sinkhole cave or “blue hole” on Abaco Island in the Bahamas, yielded 95 species of ice-age vertebrates, the most ever found on any Caribbean island. Thirty-nine of those species no longer exist on Abaco Island.

The warmer, wetter climate and rising sea levels that occurred from 15,000 to 9,000 years ago during the transition from the last ice age to the present climate probably led to the disappearance on Abaco of at least 17 species of birds — species characteristic of open habitats like pine woodlands and grasslands found on cooler, drier, larger ice-age Bahamian islands.

Although the 17 species of birds didn’t survive the ice age, 22 species of reptiles, birds and mammals did.

But they didn’t survive human beings. When people appeared on the island about 1,000 years ago and used fire to clear land for farming, those 22 species disappeared. Island species are particularly vulnerable to habitat loss because of the limited land area. 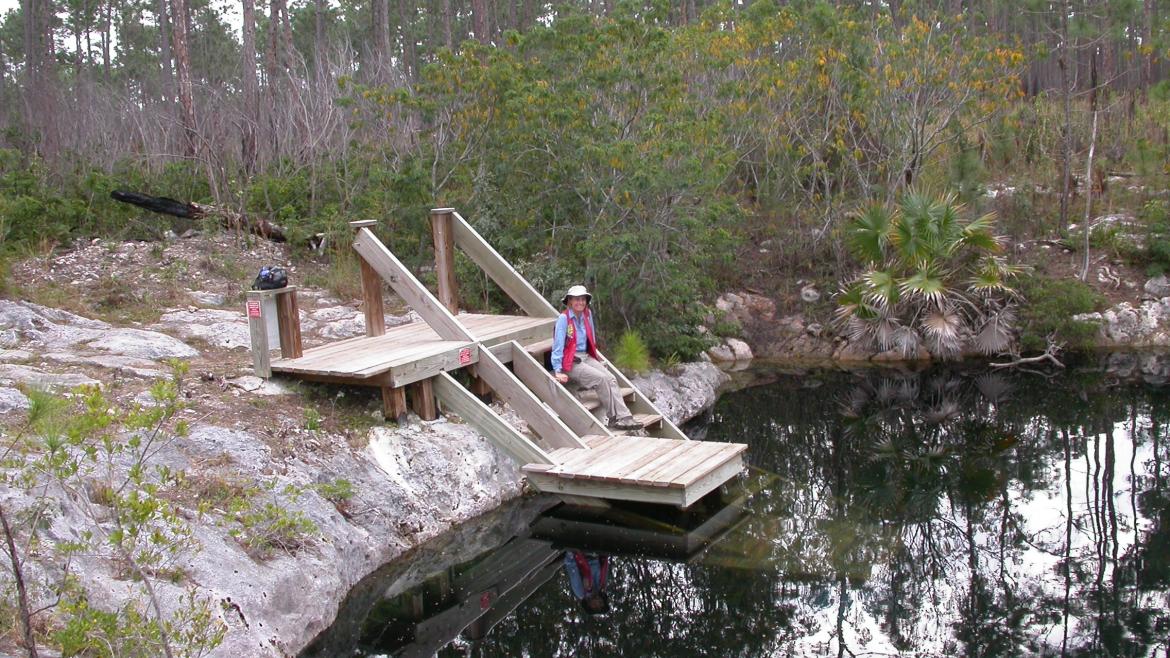 ASU Regents’ Professor Janet Franklin sits at
Sawmill Sink, where fossils of 95 ice-age
species were found. Top: The Bahama or
rose-throated parrot, which has lived on
Abaco since the last ice age.

Franklin was surprised how many species — especially of birds — stuck around the island even as the climate warmed and the islands shrank at the end of the ice age.

“We expected that there would be cooler-climate, open-country birds there in the last ice age that subsequently disappeared (went extinct or moved north), and we found that,” she said. “So that is a really cool finding, but we predicted it.

“It was dismaying to also find that, of those many species that are so adaptable they can live in the glacial or interglacial Bahamas, a whole bunch of them could not stand the pressures that accompanied people who arrived 1,000 years ago — namely the big changes in habitat that happen when people burn to clear land for farming.”

One of the biggest challenges is the speed of human-driven change. Natural climate change, such as the Earth warming from a passing ice age, takes thousands of years — a span of time that allows species to adapt, Franklin said.

“But human-caused climate change, caused by fossil-fuel burning and other greenhouse gasses emissions, only started in the 19th century and is really fast compared to natural climate change,” she said. “Species do not have a thousand years, or 10 or 100,000 years, to adjust, migrate, evolve.

“The same temperature changes are happening in 50 to 100 years, and on a planet where land is fragmented by farms, cities, etc. This makes it difficult for wildlife to adjust by migrating. How do they get there? Unless they can fly. Habitat connectivity is important in conservation planning.” 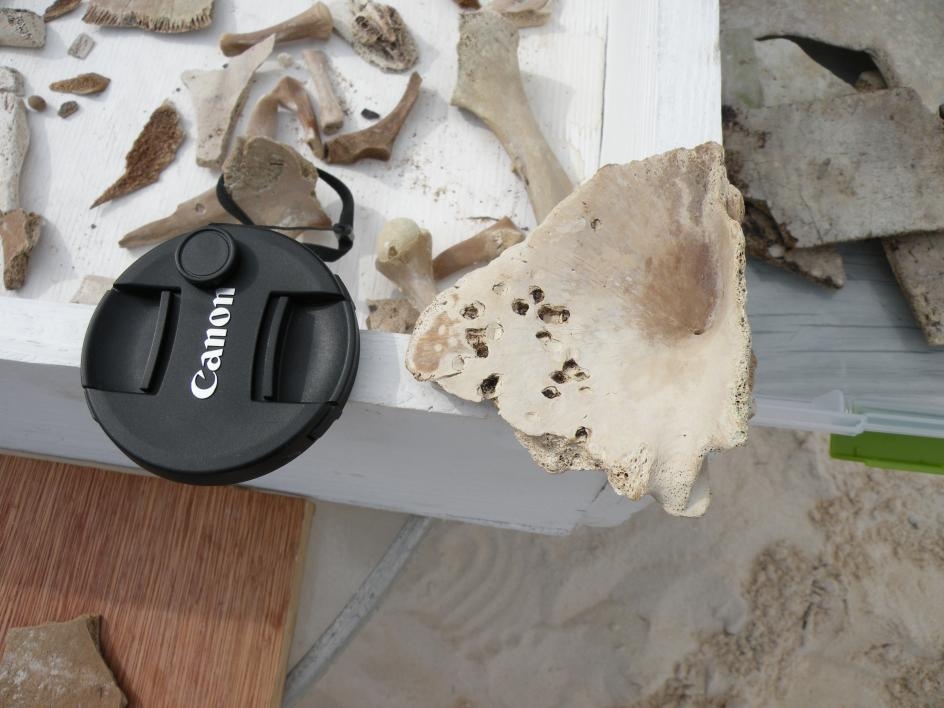 Fossil bones from the extinct green sea turtle (Chelonia mydas) and shells with bite marks from the extinct Cuban crocodile, found by local resident Perry Maillis at one of the fossil sites on Abaco Island in the Bahamas. 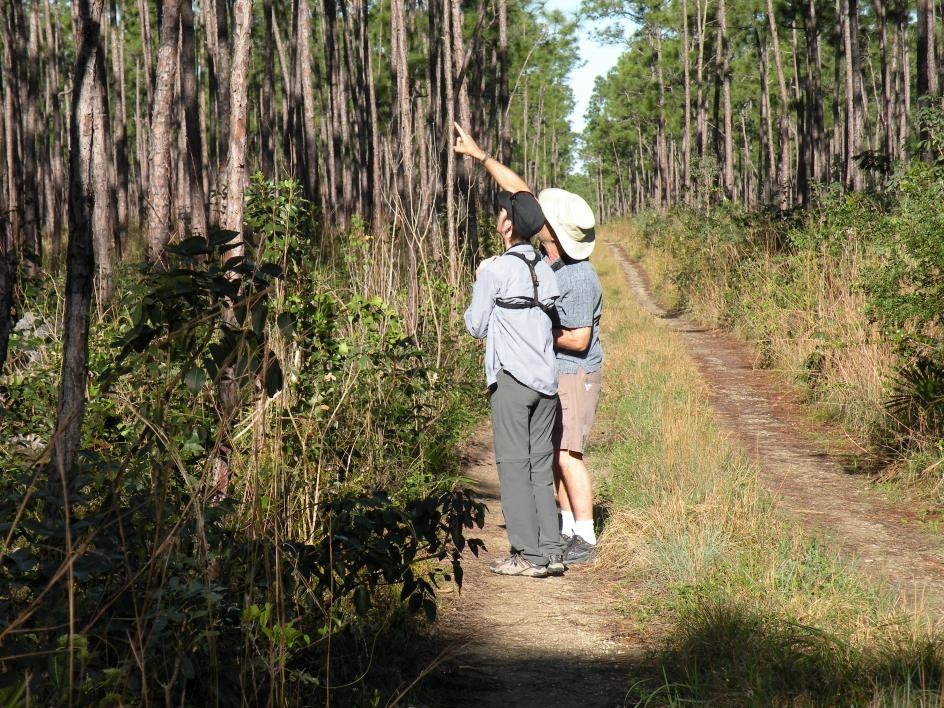 The scientific value of the fossils found in the caves has contributed directly to the establishment of a new protected area. South Abaco Blue Holes National Park now protects the system of flooded caves where many fossils have been found, including Sawmill Sink. The area supports pine woodland rich in native flora and fauna. Here, David Steadman and Julie Ripplinger are shown birdwatching. A tortoise shell in remarkable condition is recovered from Sawmill Sink, pictured with project lead author Dr. David Steadman of the University of Florida and collaborator Nancy Albury of the National Museum of the Bahamas. Steadman is an expert on bird fossils; Albury is a vertebrate paleontologist. 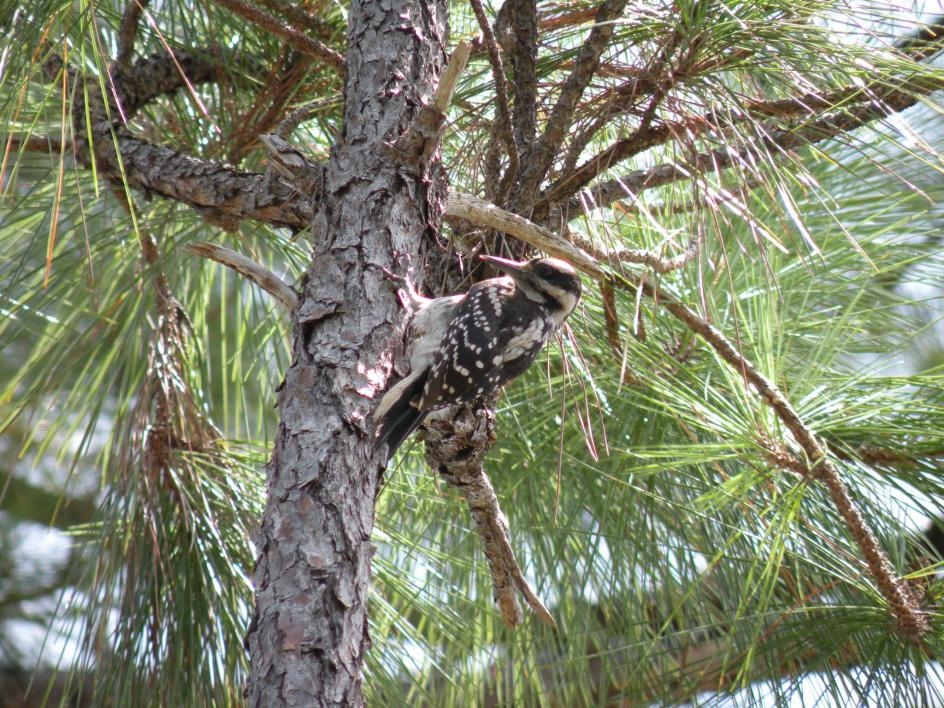 The hairy woodpecker (Picoides villosus) has now been indentified from fossils as occuring in the Bahamas at least since the last ice age.

The fossil evidence from the Caribbean sinkhole the team studied shows how much more of an impact human presence had in a vastly shorter time.

“The … arrival of people probably depleted more animal populations than the dramatic physical and biological changes associated with the (ice age),” the paper’s authors wrote. They concluded that, even though human-caused climate change in the 21st century is much more rapid than natural glacial-interglacial cycles, “[f]or the species that remain, we believe that direct human activity threatens their immediate future more than climate change.”

Franklin’s research is focused on the impacts of human-caused landscape change, like forestry and urbanization, on the environment.

“Planning for biodiversity conservation should consider all ways humans use the land, in addition to human-caused climate change,” she said. “That is why it is so gratifying that the Bahamas has just established several new marine and land protected areas, including a national park that protects the caves where the fossils were found because of their scientific value.”

The Sawmill Sink project was sponsored by the National Science Foundation. NSF support also will allow the team to return to the Bahamas later this year to explore island caves, further researching how human presence affected survival of species.

The School of Geographical Sciences and Urban Planning is a unit of the ASU College of Liberal Arts and Sciences.

Discoveries Environment Research The College of Liberal Arts and Sciences