Arizona State University’s Walter Cronkite School of Journalism and Mass Communication is joining the efforts of the Society of Professional Journalists and the Radio Television Digital News Association to honor Walter Cronkite with a postage stamp.

The U.S. Postal Service is considering a joint request from the SPJ and the RTDNA for a stamp commemorating the late CBS newscaster for what would have been his 100th birthday next year. 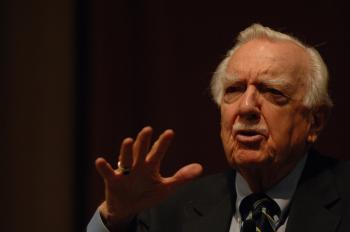 The Cronkite School is encouraging alumni, students and the journalism community to write a letter of support to the Citizens’ Stamp Advisory Committee in support of a stamp commemorating late CBS newscaster Walter Cronkite for what would have been his 100th birthday next year. Download Full Image

The Cronkite School is encouraging alumni, students, faculty, staff and the journalism community to write a letter of support to the Citizens’ Stamp Advisory Committee, a 12-member group appointed by the postmaster general that selects and recommends subjects for stamps.

“Walter Cronkite is our school’s guiding light,” said Cronkite School Dean Christopher Callahan. “He established an expectation of journalistic excellence and ethics that permeates throughout our school. We are rallying our network of students, alumni, faculty and friends to get behind this fantastic proposal by the Society of Professional Journalists and the Radio Television Digital News Association.”

The initiative was the brainchild of SPJ at-large board member Bill McCloskey of Bethesda, Maryland, who recalled a previous Postal Service ceremony for stamps honoring female journalists held during the 2002 SPJ convention.

“Attendees in Fort Worth (Texas) flocked to the elaborate Postal Service ceremony staged as a convention session and bought souvenir envelopes to have with the new stamps,” said McCloskey, who is a stamp collector. “In researching the idea, I noted Mr. Cronkite’s 100th birth anniversary (Nov. 4, 2016), and asked leaders of RTDNA and SPJ to get behind the idea.”

According to the U.S. Postal Service, the Citizens’ Stamp Advisory Committee meets quarterly to decide which stamp subjects to recommend to the postmaster general. The committee members — selected based on their expertise in history, science, art, education and sports, among other topics — annually recommend 25 to 30 subjects.

Past journalists to be honored with their own stamp include Martha Gellhorn, who covered the Spanish Civil War, World War II and the Vietnam War; John Hersey, whose most famous work “Hiroshima” described the effects of the atomic bomb dropped on that Japanese city on Aug. 6, 1945; George Polk, a CBS radio reporter who covered civil war in Greece and whose 1948 murder remains shrouded in mystery; Ruben Salazar, a Los Angeles Times reporter and columnist and news director for the Spanish language television station KMEX in Los Angeles who was killed by a tear-gas projectile fired by a sheriff’s deputy while covering anti-war rioting in 1970; and Eric Sevareid, a newspaper reporter who was recruited to CBS radio by Edward R. Murrow and covered World War II.

McCloskey advises those interested to write a letter of support to the Citizens Stamp Advisory Committee to highlight the historical legacy of Walter Cronkite.

Salute to Service: A reflection of ASU

A grassroots movement ignited by one person in the Arizona State University Alumni Association has grown from humble beginnings to a two-week event celebrating veterans and service members.ASU's Salute to Service — a tradition that started during a football game in 2011 — officially kicks off this year during Thursday’s football matchup against the University of Oregon, with some activities ... 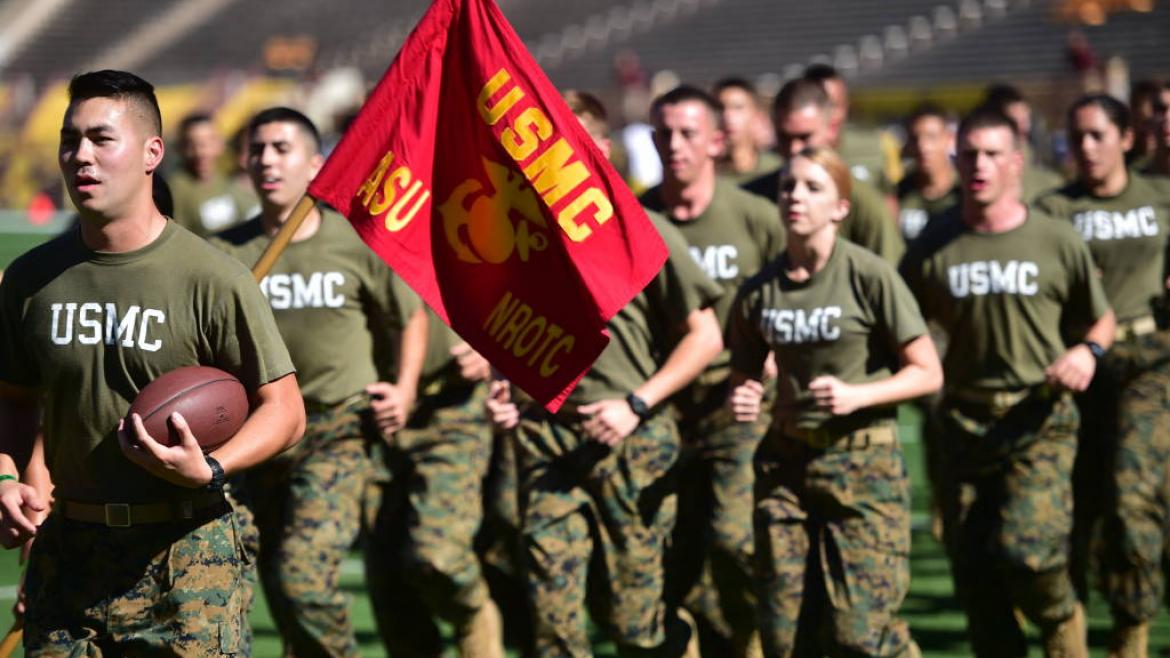 Salute to Service: A reflection of ASU

A grassroots movement ignited by one person in the Arizona State University Alumni Association has grown from humble beginnings to a two-week event celebrating veterans and service members.

ASU's Salute to Service — a tradition that started during a football game in 2011 — officially kicks off this year during Thursday’s football matchup against the University of Oregon, with some activities happening before then.

Faculty and staff have organized more than 30 military-themed events across all of ASU’s Phoenix campuses, and they invite the university community to get involved in the tribute to America’s men and women in uniform — past and present.

“It all started with one game,” said Steven Borden, director of ASU’s Pat Tillman Veterans Center. “So our home game for that first Salute to Service was actually on the 10th anniversary of September 11.”

Borden said the impetus for Salute to Service came from an alumni association employee who had a sibling in the military and felt the university should honor military members and veterans. The initiative evolved as ASU President Michael Crow, son of a Navy chief petty officer, and former Provost Robert Page, an Army veteran himself, got involved.

“They said, ‘This is something we want to have endorsed by the university as a whole,’ ” said Borden, a retired Navy captain. “So we saw the movement from September 11 to Veterans Day, and expanding from just one game to a week, and depending on the timing of the game, sometimes to a two-week celebration.”

Borden, who established ASU's Navy ROTC battalion in 2010 while still in uniform, said Salute to Service has also grown out of a larger ASU connection to the military beyond the desire to honor veterans. The university’s military ties include three ROTC units, more than 4,000 student veterans and at least 420 veterans in the staff and faculty who have self-identified in the personnel system, according to the ASU Human Resources office. ASU’s military connection is also about the work being done across campus.

“There’s a whole lot of research that goes on here that’s related to the military, the Department of Defense or some other aspect of national security,” said Borden.

Creating a prosthetic hand that can be tied to nerve endings is one of the current research projects ASU is working on with the Defense Advanced Research Projects Agency. The university is also researching the impact of mental processing caused by a mild traumatic brain injury — an increasing diagnosis for some veterans returning from war. Members of the U.S. Armed Forces have a long-standing tradition of carrying “Challenge Coins” that symbolize unit identity and brotherhood. ASU has adopted this tradition and has created its own challenge coin. The design for this year, shown above, will be used in the coin toss before the Oct. 29 football game and will be presented to veterans in gratitude for their selfless service. Photo by ASU; top photo from 2014 Salute to Service football game by Peter Vander Stoep

ASU’s direct military ties through people and research are reinforced by what Borden sees as a direct link to the university mission.

“I think Salute to Service and our veterans center are manifestations of how we live out our university charter,” he said. “We’re talking about the fact that our success as an institution should be measured by whom we include and not who we exclude.”

Enabling access to veterans is important because it gives individuals an opportunity for an excellent education but also because it strengthens the institution, said Borden. Those who have served bring into the classroom experience-based perspectives to topics such as war, conflict or geopolitics.

“We realize the university is enriched by the diversity of its student body,” Borden said. “And the veteran community is one of those aspects of diversity.”

The former senior military officer also said that ASU’s initiative to embrace veterans and the military community is another aspect of the university’s innovative thinking.

Such thinking has paid off.

ASU has been named a “Military Friendly School” for six consecutive years by G.I. Jobs Magazine. The university’s online degree programs also earned high national rankings in 2015 from U.S. News and World Report, including the No. 2 spots for graduate criminal justice and business programs, and No. 4 in the nation in MBA programs.

“We see students coming here because we have the programs they’re interested in and because of the quality of our programs,” Borden said. “In the past year we’ve had an over 40 percent increase in the number of veterans enrolled online.”

Salute to Service and ASU’s affinity toward the military also extends to families. Borden said there are nearly 1,000 students from military families attending ASU and using G.I. Bill educational benefits transferred to them by their parents — a unique feature of the Post-9/11 GI Bill. The veterans center takes care of the benefits paperwork for families and also serves as a support system.

“If they have any issues they can come in and talk to somebody here,” Borden said. “Oftentimes they feel more comfortable speaking with someone who understands a little more about the military culture.”

The director looks forward to Salute to Service and encourages all students, faculty and staff to attend an event to get a better appreciation for ASU’s military ties. One of the more distinctive events this year will be the Veterans Vision Project by ASU student Devin Mitchell.

Mitchell’s project is a collage of veteran photographs showing contrasting sides of each person — their military image on one side of a mirror and aspects of their individuality on the other side.

“Here is a non-veteran student who has found out there are some stories veterans need to tell, and he has found a very powerful way for veterans to engage and tell these stories,” Borden said. “That’s an example of the area that Salute to Service is expanding into … to be able to highlight how veterans are touching the institution and how the institution is touching and embracing veterans.”

Mitchell’s photographs will be on display during Salute to Service at all four campuses: