“This law school remains on its path of excellence and we are committed to helping students succeed,” said ASU Law Dean Doug Sylvester. “These recent gifts are representative of the generosity of our community.” 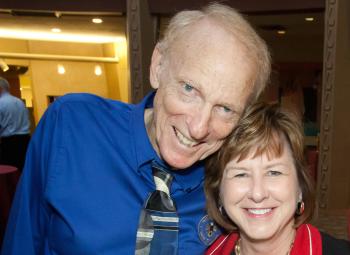 The Berches’ $1.5 million planned gift is the latest in a series of gifts from them stretching back decades. Michael Berch said he and his wife began giving to ASU Law when they first married — about $50 each pay period. In 1992, the couple started a scholarship that now benefits five to seven students a year. The Berches’ new gift will also fund scholarships.

Months before the Berch family made its latest gift, Dean Sylvester announced that a portion of the fourth floor in the new law school building in downtown Phoenix would be named the Michael and Rebecca Berch Student Success Center in honor of the couple’s unwavering commitment to ASU Law students. Michael Berch began teaching at ASU Law in 1969 and retired last year. Recently retired Justice Rebecca White Berch graduated from ASU Law in 1979 and also taught at the law school for a time.

Like the Berch Family, Grant Woods’ gift of $1 million will go toward funding scholarships. In honor of his generosity, ASU Law named the courtroom classroom in the new building the J. Grant Woods Courtroom. Woods graduated from ASU Law in 1979.

“I feel you have an obligation to serve the community when you can,” Woods said. “This is a great time for people to get involved with the law school. The school has gone from good to great and will now have a state-of-the-art facility. I don’t know why you wouldn’t want to be involved with an exciting, dynamic, welcoming institution like ASU Law.”

In August, the Steele Foundation made a grant award of $2 million to ASU Law to endow the Daniel Cracchiolo Chair in Civil and Criminal Law, thus founding the largest named chair in the school’s history.

In recognition of this gift, ASU Law will name the executive conference room in the new building after Cracchiolo, chairman and former CEO of the Steele Foundation and co-founder of one of Phoenix’s most prominent law firms, Burch & Cracchiolo.

“It’s been an amazing experience to witness the generosity of our community, especially in the past few years. This law school raised $2 million a year over the past 30 years, but in the past five years alone has raised $45 million,” said James Van Wicklin, senior director of development at ASU Law. “This has been a gratifying experience, and I hope to rally our broader alumni base to get even more involved.”

ASU Law’s “Building the Future” campaign has a goal of raising $50 million by 2017. To contribute, please contact James Van Wicklin at james.vanwicklin@asu.edu.

Student-athletes work hard for their success

Editor's note: This feature is part of a series profiling different slices of ASU's diverse population. Find more stories here.Alexandra Osborne didn't sleep through her alarm once this summer.She couldn't. A few minutes of extra sleep and her entire day would have been off.The ASU tennis player's first obligation was a two-hour practice session that started at 7:30. From there, she had to report ... 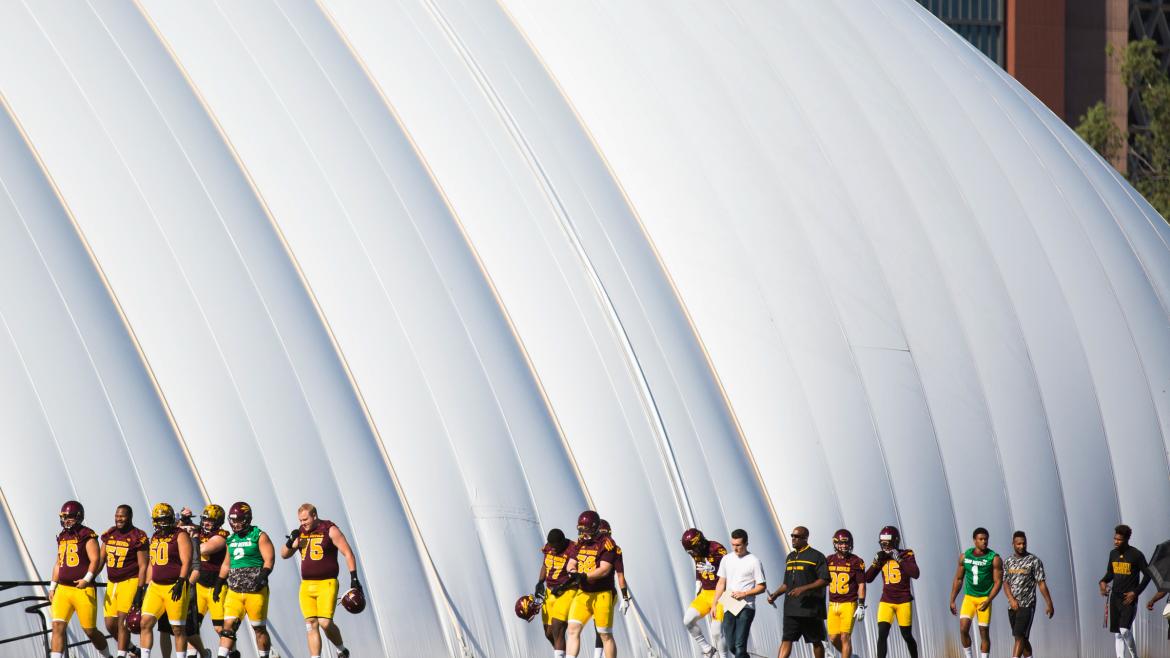 The daily grind: ASU student-athletes work hard for their success

But these regimented players wouldn't have it any other way

Alexandra Osborne didn't sleep through her alarm once this summer.

She couldn't. A few minutes of extra sleep and her entire day would have been off.

The ASU tennis player's first obligation was a two-hour practice session that started at 7:30. From there, she had to report to her internship in ASU’s sports department for a bit, sit through a class, run home for a quick lunch, return to campus for another class and then end her day with a weight-lifting session.

Oh, and let’s not forget the nights filled with homework.

And this was just her summer schedule. The fall introduces a heavier class load and more time devoted to training. When the tennis season starts in the spring, add matches and interstate travel to the docket.

“It’s like we have a full-time job and we’re studying at the same time,” the junior business major said in her friendly, fluid Australian accent.

But “I made that choice. I knew I’d be busy. I like to be doing something, I’m a very active person.”

That last line might as well be the unofficial credo for ASU’s student-athletes, a collection of busy bodies whose days are planned down to the very minute in a grid of classes, sports responsibilities and the daily maintenance we all need — food, rest and, hopefully, some social interaction.

Ill-advised movies and TV shows have long programmed us to believe university-level student-athletes live like kings, with perks that include instant popularity, teachers who reward class enrollment with passing grades and the leisurely life of, well, royalty.

But talk to ASU’s many student-athletes, and they paint a picture that might shock lazy screenwriters.

“Last semester my day was 7:30 a.m. to 7:30 p.m. Non-stop. Monday through Friday,” said Tommi Goodman, a senior majoring in journalism who plays midfield on the soccer team. “It can get tiring at times, but I love it. I wouldn’t change anything.”

That’s another refrain heard from ASU’s student-athletes: They love this lifestyle.

Even if it means less time hanging out with peers, going to concerts or chilling while playing a video game for hours, they love the grind of trying to find success in the classroom and on the field — or court, track or rink.

There’s also less time for things like internships, a necessary ritual in the pathway to finding your dream job.

“If you’re serious, your social life is going to suffer,” Osborne said. “They get the weekends off, most students. That would be nice.”

Let’s be clear, though. She’s not asking for pity. Although there are sacrifices for committing to the student-athlete lifestyle, there are definite benefits; like networking for jobs after leaving ASU, planned study halls, tutoring for those who need it and the glory that comes from representing ASU in the athletic arena.

They also get to be part of a community that understands exactly what they’re going through. 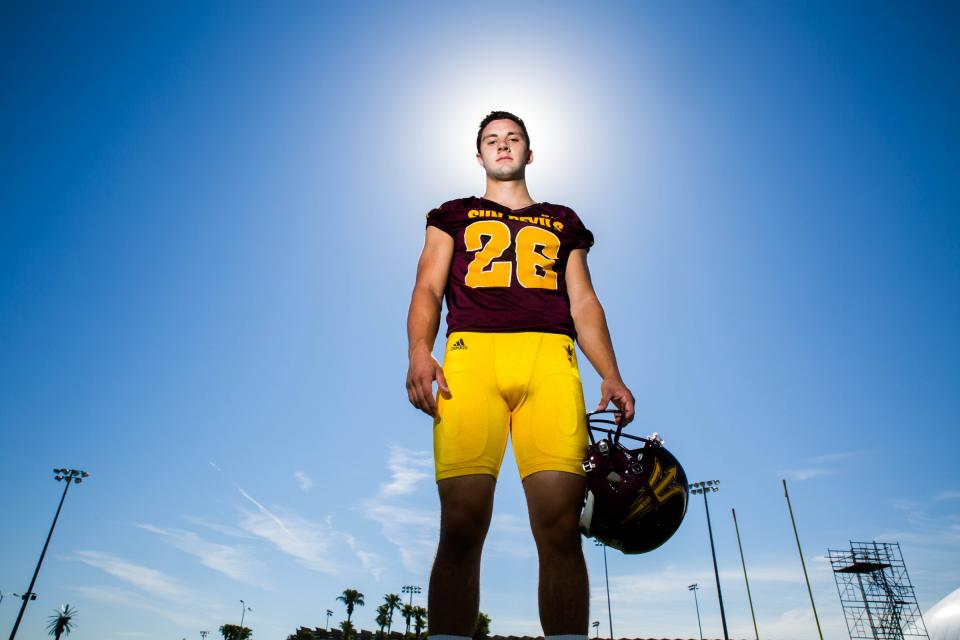 Of course, this is coming from a tennis player, and echoed by a soccer player. Their sports are popular, but not to the level of glamour sports like football or men’s basketball. So what’s it like for those student-athletes who earn more time in the national spotlight?

“I think we’re treated like everyone else,” said Matt Haack, the punter for the Sun Devils football team. “Usually, you just blend in, that’s how I feel.”

Now, that might be easier for Haack — who stands 6 feet, 1 inch tall and weighs just under 200 pounds — than it is for his bigger brothers on the offensive line. Still, he has a point. ASU’s student-athletes say they don’t feel like they’re special or different from the rest of the student body. They’re simply students who spend a lot of time preparing for sports.

A lot of time.

Haack’s typical day during the fall semester starts at 6 a.m. for breakfast with the team — unless he’s recovering from an injury, when he’ll be in before 6 for therapy.

Afterwards, there are position and team meetings from 7 to 8. Practice at 8:30 until 11 or 11:30, followed by lunch. The afternoon is a slate of classes until 5 p.m. Then it’s dinner and time for homework — unless there are night classes.

“By the time you go to bed you’re dead,” he said. “A lot of people only see the 14, 15 Saturdays that we’re playing. But the workouts, the running, the practices, they’re tough, but I wouldn’t want to do it any other way. I don’t know what I’d do without it.”