With technical advances coming at a quickening pace and societal challenges becoming more complex, Arizona State University’s department of chemistry and biochemistry is transforming into the School of Molecular Sciences to better reflect its mission and gear up for the future.

The new school designation is in recognition of the changing roles of chemistry and biochemistry — fields that are developing rapidly and filling many new and critical uses. 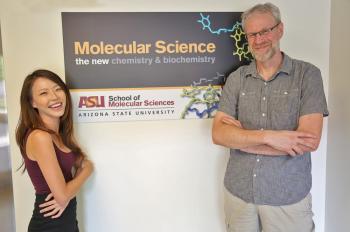 Ian Gould, President’s Professor in the School of Molecular Sciences (right, with graduate student Ara Austin in front of the new school's banner), said research at the new school is being refocused around contemporary societal themes, such as energy and sustainability. Photo by Rachel Nemeh/State Press Download Full Image

A celebration event for the new school’s launch will be held at 4 p.m. Oct. 21 in the atrium between the C and D wings of the Physical Sciences building on the Tempe campus.

At the heart of the School of Molecular Sciences will be an expansion of the traditional disciplines of chemistry and biochemistry into a broader context of contemporary education and research.

For example, ASU’s faculty and students already use chemistry and biochemistry to understand and diagnose diseases and improve health, to develop new ways of converting and storing energy and to design and build new multifunctional materials, according to Daniel Buttry, director of the new school.

“Progress in each of these areas requires a deep understanding of molecular structure, properties and synthesis, but the research goals are trending away from problems in discipline-based chemistry and biochemistry and towards larger, mission-based societal problems,” Buttry said. “These societal ‘grand challenges’ often require faculty and students to work in larger, interdisciplinary groups that extend beyond the traditional boundaries of chemistry and biochemistry.”

According to Ian Gould, President’s Professor in the School of Molecular Sciences, the work of faculty and students reflect the ways in which chemistry and biochemistry as disciplines are maturing and how future progress in these fields will be accomplished.

"The new school recognizes that when our students graduate and become independent scientists, they will be required to work on problems that cannot be solved by individual scientists, and to work in teams in which traditional disciplinary labels have little meaning,” Gould said. “We need to train our students to be successful in the post-disciplinary scientific world."

For these reasons, he said, research at the new School of Molecular Sciences is being refocused around contemporary societal themes, including: 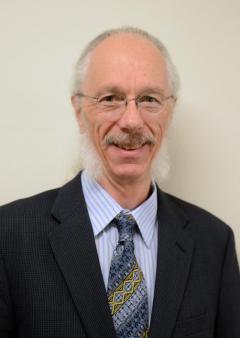 “Organizing around these themes will encourage new research initiatives and will focus our faculty and students on real-world challenges, where progress will only be made with an understanding of how macroscopic phenomena are controlled by processes at the molecular, atomic and electronic scales,” said Buttry (pictured left). “An example of this evolution is the change of research focus for several of our faculty from understanding the nitty-gritty of photosynthesis reaction pathways to applying that knowledge to design new energy sources based on light absorption.”

The new groups working in these areas will develop new seminar series, discussion groups and courses, and the reorganization will more accurately reflect the current intellectual endeavors of ASU faculty and students.

While the primary goal of the new school is to properly align research areas with faculty interest and contemporary problems, longer-term goals are to investigate the educational needs relevant into the 22nd century.

Gould said the school will offer potential undergraduate students new research opportunities in contemporary science, and new degree offerings are anticipated in the next few years that connect to emerging career opportunities. The school also will offer potential graduate students an immersive experience in interdisciplinary research teams throughout their graduate experience, and provide the training they need to be successful future independent scientists.

”Our overarching goal is to produce graduates with the cutting-edge skills needed to do impactful work in large interdisciplinary groups and who can contribute molecular-level thinking to address pressing societal needs,” Buttry said. 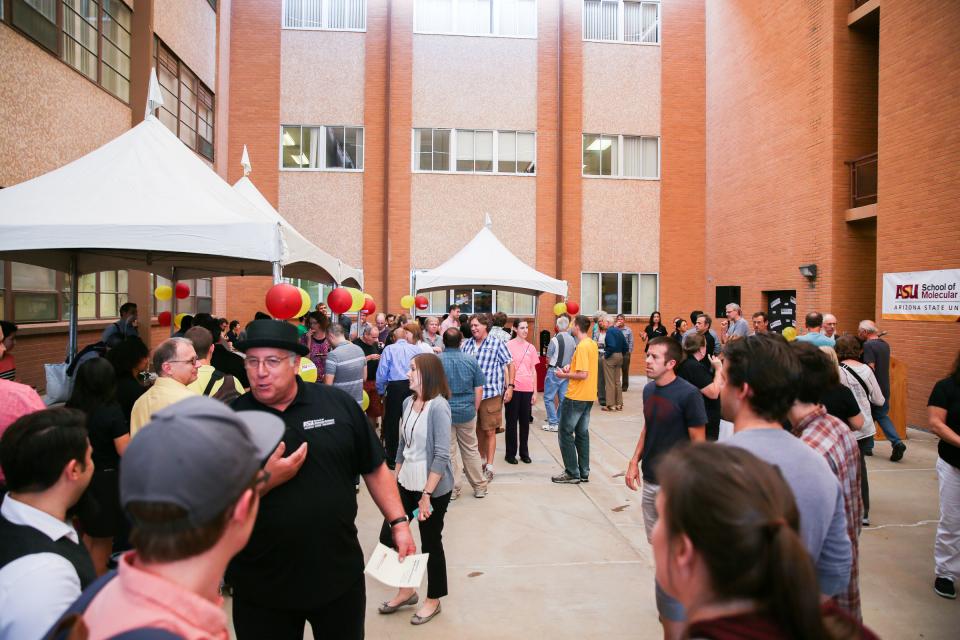 Above and below: Faculty, students and staff gather for a celebration of the new School of Molecular Sciences on the Tempe campus Oct. 21. Photos by Deanna Dent/ASU Now Enlightenment and reason make the world a better place

How can we be better people in the 21st century?Embrace reason and science, said renowned animal-rights philosopher Peter Singer and theoretical physicist Lawrence Krauss at a discussion Friday night.“Singer & Krauss: An Origins Project Dialogue” was sponsored by Arizona State University’s Origins Project, a transdisciplinary initiative exploring fundamental questions such as the origins... 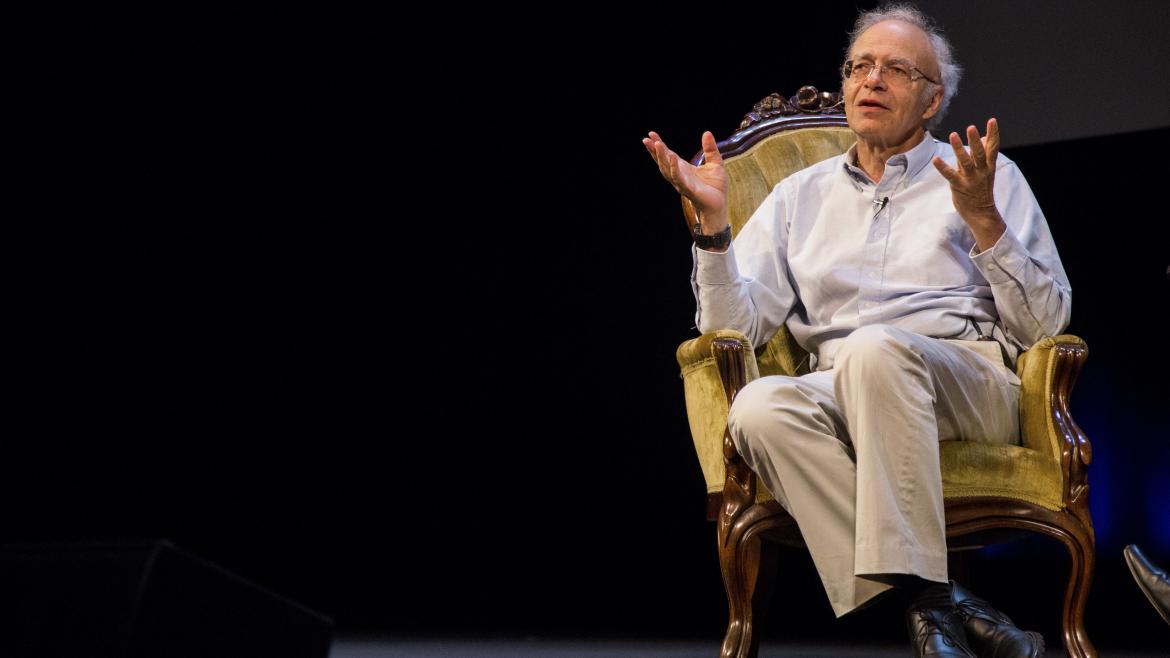 Enlightenment and reason make the world a better place

Philosopher Peter Singer said the capacity to reason allows us to empathize.
“As a physicist, I don’t think there’s free will," said ASU's Lawrence Krauss.
Animal rights is a nuanced topic, according to animal advocate Peter Singer.
October 20, 2015

How can we be better people in the 21st century?

“Singer & Krauss: An Origins Project Dialogue” was sponsored by Arizona State University’s Origins Project, a transdisciplinary initiative exploring fundamental questions such as the origins of the universe, life, consciousness, culture and human existence. 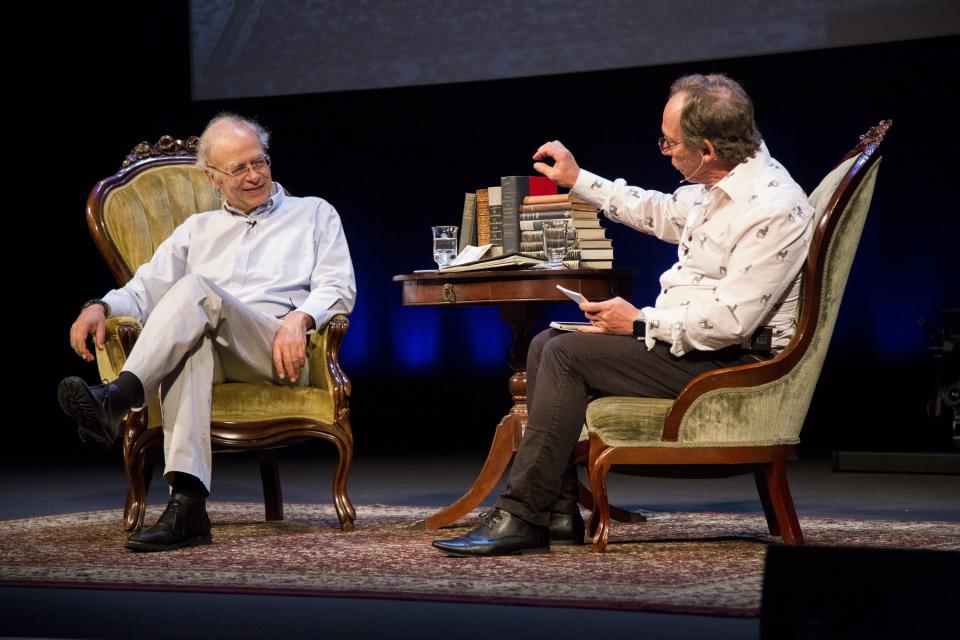 Renowned animal-rights philosopher Peter Singer (left, and in top photo) and theoretical physicist Lawrence Krauss, director of the Origins Project at ASU, debate issues of ethics and science Friday in a conversation sponsored by the Origins Project. All photos by Tessa Menken/ASU

Singer gained renown in the mid-1970s as the author of “Animal Liberation,” the landmark book that argued for the first time that animals have rights. His arguments about the ethics of eating meat, biomedical experimentation on animals, and industrial farming changed lives and spawned a new consciousness about animal rights. A professor of bioethics at Princeton University, Singer’s latest books have focused on moral philosophy and applied ethics.

Krauss is a cosmologist and one of the first physicists to suggest most of the universe’s mass and energy lies in empty space — the concept of “dark energy.” An advocate of public policy based on empirical data, scientific skepticism and the public understanding of science, he appeared before the Ohio state school board in 2004 to speak in opposition to the idea of intelligent design. Krauss is Foundation Professor of the School of Earth and Space Exploration at Arizona State University and director of the Origins Project.

“It’s very easy to think that if you look at newspapers and TV things are getting worse and worse,” Singer said Friday night at the Scottsdale Center for the Performing Arts. “That’s a myth.”

Enlightenment and reason have made the world a better place, Singer said. He said the capacity to reason allows us to see and imagine other beings in the world and empathize with them.

“We can understand more what it’s like to be a different being in this world because of science,” he said.

The duo discussed altruism, such as donating blood or giving to a disaster-relief fund for a distant country.

“How is it possible to be altruistic to strangers, to people you don’t know?” Singer asked. “I think it comes from our capacity to reason.” Singer and Krauss speak Friday in front of a large crowd at the Scottsdale Center for the Performing Arts.

“How do you know what is good?” Krauss asked.

Reasoning is the right way to moral standards, Singer said.

“We have to have experiences and then make judgments,” he said. “What is good is judging what is to be the best outcome.”

Can we make choices in life, or is everything mapped out before we take our first steps?

“I want to spend two minutes on free will, because that’s all it’s worth,” Krauss said. “As a physicist, I don’t think there’s free will. … At some level, the universe is deterministic.”

Determinism is the idea that all events, including human action, are ultimately determined by causes external to the will. Some philosophers have taken determinism to imply that individual human beings have no free will and cannot be held morally responsible for their actions. As a physicist, Krauss (right) does not think there is such a thing as free will.

One choice Singer strongly advocated people make is to change consumer spending on meat products, because it’s one of the best ways to stop animal abuses.

“Anybody with any concern for animal suffering ought not to support it,” Singer said

He pointed out that the extremes suggested by radical animal-rights activists aren’t practical, and that animal rights is a nuanced topic. Animals simply can’t be given completely equal rights.