The council, comprised of university presidents and academic leaders, provides advice to Johnson and senior Department of Homeland Security (DHS) leadership on matters related to homeland security and the academic community.

Since HSAAC’s formation in 2012, its members have issued more than 120 recommendations in the areas of academic research and faculty exchange, campus resilience, cybersecurity, international students, DHS academic programs and student and recent graduate recruitment.

Crow’s service on the HSAAC will draw on his distinguished career in academic research and public service, which he began in 1974 by joining the University Year for ACTION, an affiliate program of the Volunteers in Service to America (VISTA).

Crow then received his doctorate in public administration and served in various leadership roles in higher education, including as executive vice provost of Columbia University. Crow is a fellow of the American Association for the Advancement of Science and the National Academy of Public Administration and a member of the Council on Foreign Relations and U.S. Department of Commerce National Advisory Council on Innovation and Entrepreneurship. He also serves on the National Security Higher Education Advisory Board, which promotes understanding between the FBI and higher education on issues such as terrorism, counterintelligence and homeland security. 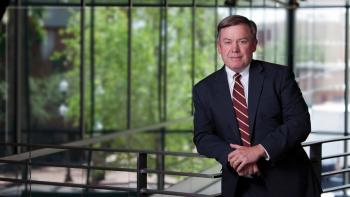 John Dean, who served as President Richard Nixon’s legal counsel, and then as a witness for prosecutors during Watergate, one of the 20th century's most notorious scandals, told Arizona State University journalism students he wants future reporters not to forget the past.“There’s a group of people out there who want to revise history and are making money off of the Watergate scandal,” Dean... 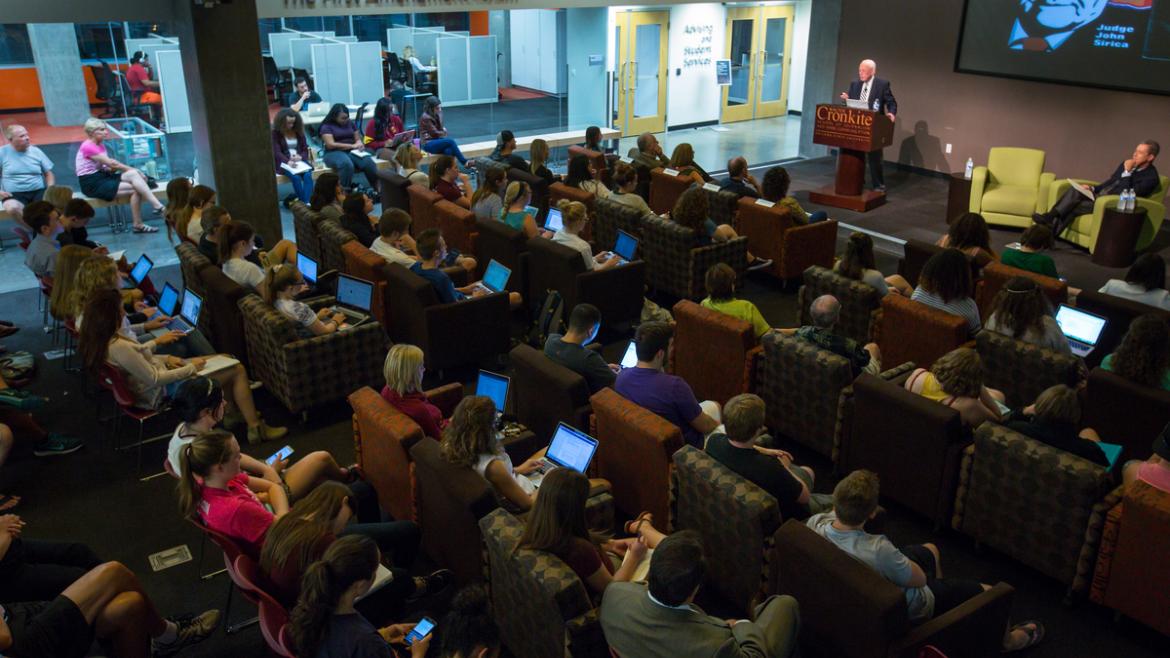 John Dean, who served as President Richard Nixon’s legal counsel, and then as a witness for prosecutors during Watergate, one of the 20th century's most notorious scandals, told Arizona State University journalism students he wants future reporters not to forget the past.

“There’s a group of people out there who want to revise history and are making money off of the Watergate scandal,” Dean said. “History becomes bogus when you’re dealing with bad information.”

The historical context of Watergate came to life Thursday evening in Dean’s discussion, “Uncovering Watergate’s Legacy and Impact on Journalism,” which took place in the First Amendment Forum in the Walter Cronkite School of Journalism and Mass Communication on ASU’s Downtown Phoenix campus.

Dean’s lecture explored his four decades of reflection on the scandal, the lessons he learned and how time has given him a much better perspective.

“I didn’t look at it (Watergate) in a historical context at the time,” Dean told an audience of about 125 people, comprised mostly of journalism students who were born a quarter-century after Watergate unfolded.

“I was in the fight of my life taking on the President of the United States. My colleagues wanted me to fall on the sword as per their orders, and I didn’t take well to that. I’m still living with that stigma, but it doesn’t trouble me because I told the truth.” 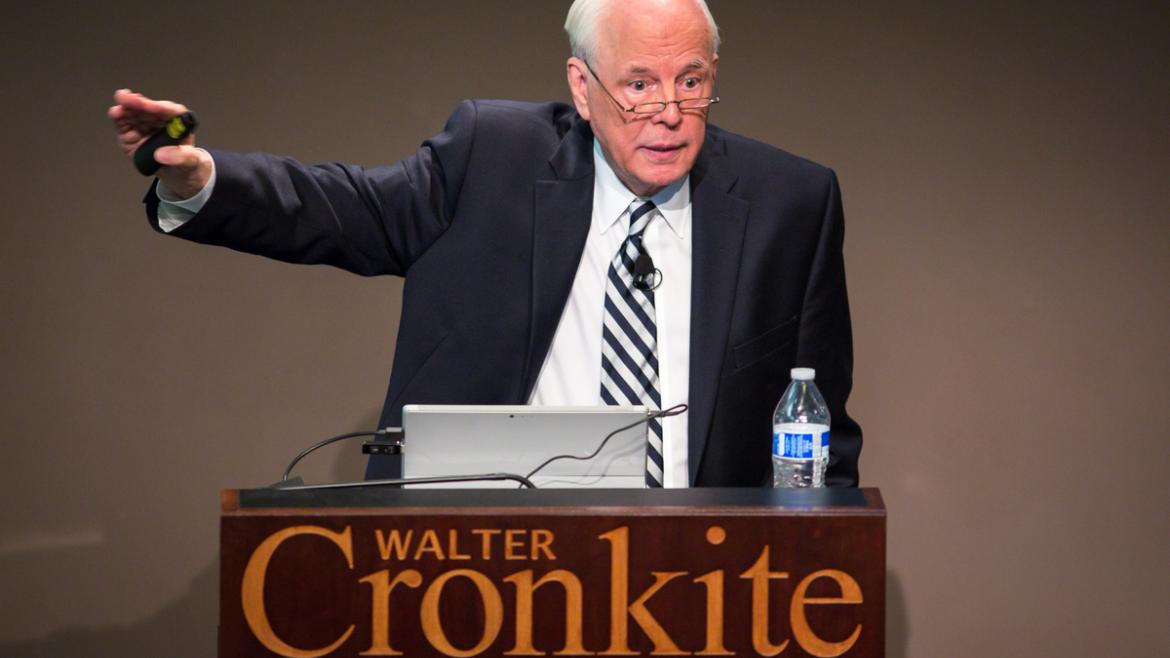 Reporting on a scandal

John Dean, regarded as the main whistleblower
in the Watergate scandal, told ASU journalism
students, that he doesn't live with regret
because he told the truth.

The scandal unfolded on June 17, 1972, with the arrest of five burglars dressed in business suits, sporting surgical gloves, their pockets stuffed with crisp $100 bills and carrying suitcases filled with wiretapping equipment. Their intent was to bug the Democratic National Headquarters at the Watergate office complex in Washington D.C. The five men were arrested and Nixon hastily constructed a cover-up.

Dean depicted the operatives as fumbling idiots and gave an even harsher assessment to the man who hired them, G. Gordon Liddy, a former FBI agent who served in several positions under Nixon.

“Liddy has often portrayed himself as a James Bond-type character,” Dean said. “He was not even in the Maxwell Smart category because he bungled so many operations.”

Dean also took time to praise the dogged efforts of The Washington Post in its relentless coverage of the case and cover-up, noting that it changed the face of modern-day journalism.

Dean served as counsel to Nixon from 1970-73. At the Senate Watergate Committee in June 1973, Dean implicated Nixon, administration officials and himself in the cover-up. During his testimony, he also mentioned the existence of Nixon’s infamous “Enemies List,” which included major political opponents of the president, labor organizations, media, academics, business people and celebrities.

“The White House was basically a cesspool,” Dean said of Nixon's tenure, noting his second term as especially vengeful.

He pleaded guilty to obstruction of justice and later testified during the trial of several of Nixon’s White House aides. Dean served four months in federal prison for his role in the cover-up.

Following his prison stint, Dean went on to become an investment banker, lecturer and author of 14 books, most recently “The Nixon Defense: What He Knew and When He Knew It.”

Dean said though the Watergate saga changed the face of journalism one of its negative impacts is its lasting “aura of cynicism” the press has toward standing presidents. He believes their attitudes have shifted from trusting to distrustful, and should move back toward the middle.

“Before Watergate there was too much leniency given to presidents,” Dean said. “Now there’s not enough benefit of the doubt to the let the president do what he needs to do.” 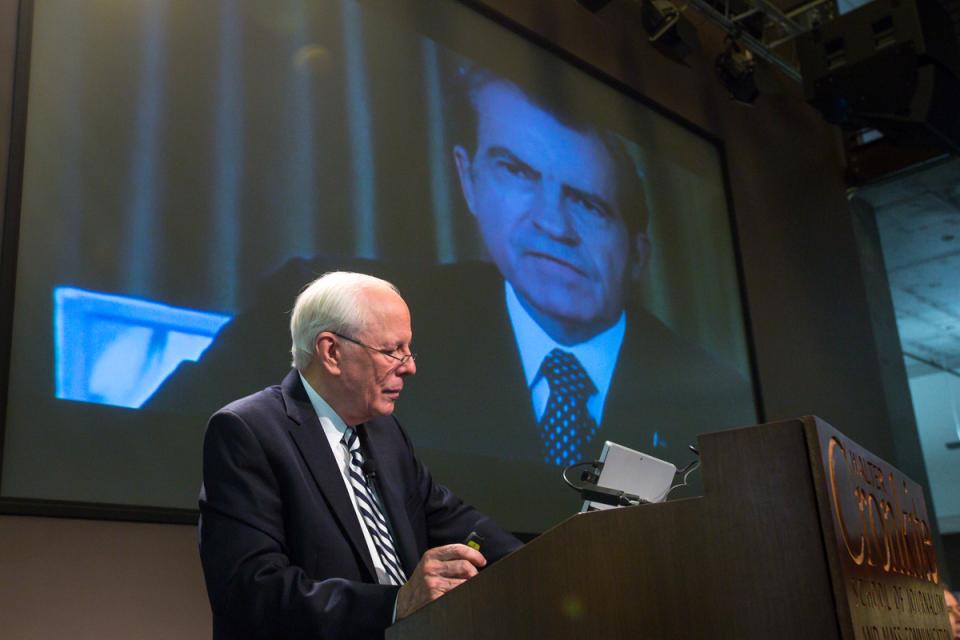 John Dean, former counsel for President Richard Nixon, shows a video of Nixon at the Walter Cronkite School of Journalism and Mass Communication on Oct. 15.

Christopher Callahan, dean of the Cronkite School, said the discussion was a teaching moment for students.

“This is a fantastic opportunity for our students to hear from one of the key figures of Watergate, which was not just a watershed moment for American politics, but for journalism as well,” Callahan said.

For Megan Janetsky, a 19-year-old journalism student, the night was an opportunity to understand Watergate’s history first-hand.

“I knew a lot about the story and I love American history, so hearing an insider’s perspective and seeing the other side of the story and the extent in which Nixon went in order to cover this up was interesting,” Janetsky said.

Dean’s lecture was also of great interest to 18-year-old Mitchell Atencio, a freshman at the Cronkite School.

“Growing up, Nixon was painted as one of the most shady presidents in history and his famous line ‘I am not a crook’ meant the opposite was actually true. He was a crook, and so I grew up with this distaste for him. That started to shift a few years ago after I started to learn more about politics,” Atencio said. “I thought Mr. Dean did a good job of explaining Watergate to those who weren’t around for it and a lot of us might not know what actually happened.”

This won’t be the last students will hear from Dean, who has been appointed to ASU’s Barry Goldwater Chair of American Institutions for the fall and spring semesters.

The Goldwater Chair supports the appointment of scholars who have distinguished themselves in the fields of political science, history, economics, law or public policy. Dean will give several classroom and public lectures throughout the fall and teach courses in philosophy and law at ASU this spring.