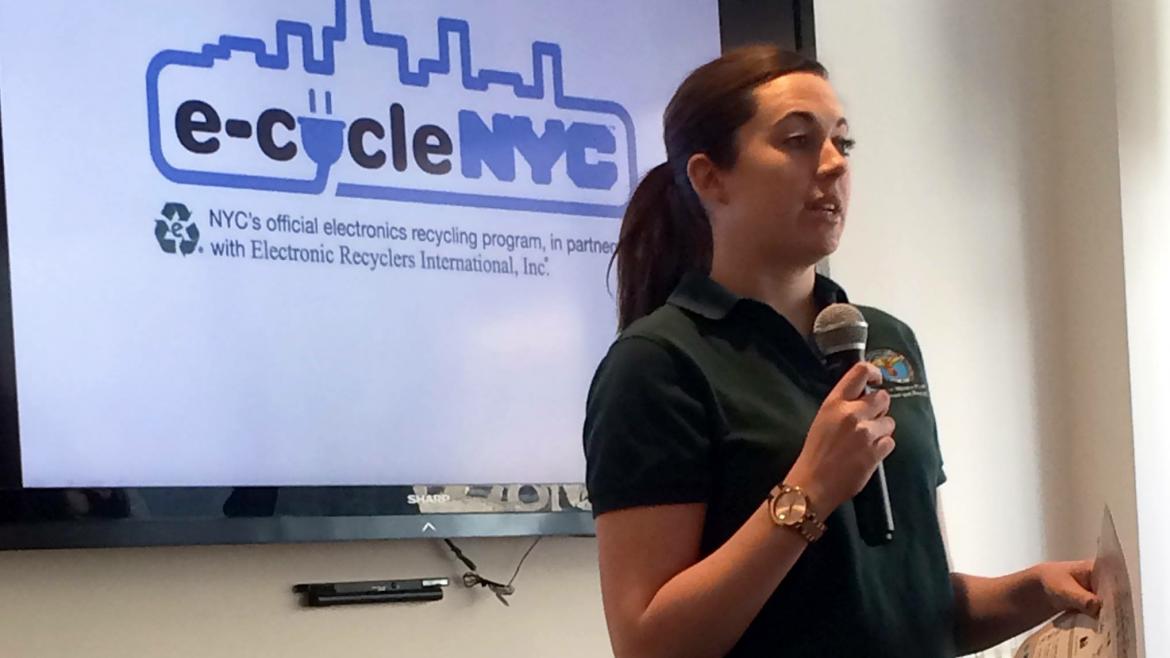 Why should you care about recycling? ASU alum has the answer.
October 16, 2015

Jessica Schreiber may have gotten a late start on recycling — she never heard of it until college — but you wouldn't know that by her profession today: overseeing recycling programs for the biggest city in the country.

Schreiber explains that she was so inspired by a lecture on climate change that she wanted to be able to teach what she had learned to the general public. She received degrees from both ASU’s School of Life Sciences and Mary Lou Fulton Teachers College in 2010, and she advocates for increased individual responsibility as the senior manager of apartments and outreach for New York City’s Department of Sanitation.

Despite an increasingly busy schedule due to NYC’s recent announcement of a Zero Waste goal, Schreiber took some time to share about her favorite part of the job and to tell us why we should care about recycling.

Question: What does your position with the New York City Department of Sanitation entail?

Answer: I work in the department’s Bureau of Recycling and Sustainability managing recycling programs for New York City apartment buildings. This includes textile, electronic and food-waste recycling, as well as recycling trainings for building staff and management on the mandated metal, glass, plastic and paper streams. I also coordinate public events for the bureau and help with our social-media channels.

Q: Why did you choose to pursue a career in sustainability?

A: I was serving as a peer mentor in the education residential college, and one of the training sessions covered recycling in the dorms. That was the first time I heard anyone talk about recycling, and I became obsessed.

That year I set up a recycling program for my entire floor. Every week I collected recycling from each resident and paid them in Monopoly money for the items they recycled. At the end of each semester, I held an auction where residents could use their accumulated cash for small prizes, and I shared stats on what our floor had recycled. Some of the lessons I learned while completing that project — about convenience, motivation and scale — still inform my current work. It was when I fell completely in love with waste management.

Q: How did ASU help get you there?

A: My sophomore year, during a lecture devoted to climate change and resource use, a professor said, "Scientists have answers, but they are terrible communicators." I remember thinking, "I get that, but it's a solvable problem."

I immediately wanted to bridge that gap; I wanted to understand the science, but also communicate it in ways that mattered. That's when I added my second degree in education. I needed to learn how to take complex concepts and processes and break them into comprehensible pieces, without losing meaning.

ASU provided opportunities for me to explore and lead, and most importantly, supported the chances I wanted to take. The culture of "If you want to, and are willing to do the work, let's make it happen!" is something I have seldom encountered since leaving ASU.

Q: Why should people care about recycling?

A: How much time do you have? Economically, we're spending millions of dollars to bury things. Things that could be recycled or reused to prevent the further destruction of our natural world. It's nuts. Ecologically, the problems with landfills are numerous, and the resources we need to fuel our consumption are rapidly being diminished. Socially, items we are throwing out now will become part of the landscape of the future, and that is quite an obligation we have to humans to come.

At a recent seminar I attended, someone mentioned that future generations will be unable to mine resources from the ground or forest — we will have depleted them all. Instead, mining will happen in landfills, to recover things we currently consider invaluable. I think it's a powerful but sad image.

Ironically, I think our contemporary problem with waste management is actually how well we solved it in the past. We remove waste so effectively that people are not always aware of how much they are actually producing. I believe on a national scale it's an average of 4.5 pounds per person per day. Think of how differently we would go about buying and using items if we knew that, when we were ready to throw it away, it didn't go "away."

What if it stayed in your front yard? Think of how that might not only change your behavior, but by social comparison, change the behavior of a neighborhood? I wouldn't advocate for that, but the need to activate individual responsibility and personal engagement within a municipal management framework is something I find very interesting.

Q: What is your favorite part of the work you do today?

A: I really enjoy working in government on the local level. I get to be involved in designing and implementing programs and policies that directly influence my community. At the state or national level, I might not have such tangible evidence of the effects of my work. I can drive around any borough and point to buildings enrolled in e-cycleNYC, and it's awesome to meet a property manager and they have a re-fashioNYC bin in their building! I love that the programs include both systems management, data analysis and public interaction. It's the nexus I always hoped to be part of!

Q: What advice would you give to someone interested in a career in the renewable/sustainable field?

A: I think it helps to determine what aspect of sustainability you find most compelling. Is it air quality? Is it renewable energy? Is it water conservation? Is it public outreach? Once you find something you care about, any related work will be worthwhile in helping you refine your interests and grow in expertise. Your first job might not be your dream job, but you can use each role as a stepping-stone, and let your goals evolve. As a new manager I think all the time about advice my mother gave me: try to find ways to make your boss' job easier. It's not specific to sustainability, but it has always served me well.

A: We're hiring! NYC recently announced a Zero Waste goal, which means our bureau is very busy and growing. Current job postings can be found at: http://www1.nyc.gov/site/dsny/about/inside-dsny/jobs.page.

Shauna Stein (JD Candidate) had her article, “You Did Not Win: Reflections on My Relationship with a Holocaust Survivor,” published in Jewish News. The piece recounts the relationship Stein built with a Holocaust survivor and lessons learned. Stein is president of the Jewish Law Student Association.

Ashley Votruba (JD Candidate) published an article in the summer 2015 issue of the Judges' Journal. This article examines problems courts face by discussing "deceased" forensic sciences that are no longer recognized as valid. The article was co-written with Professor Michael Saks.

Professor Charles Calleros will be receiving the Lifetime Achievement Award from Arizona's Hispanic Bar Association, Los Abogados. Professor Calleros also presented his article, “Advocacy for Marriage Equality: The Power of a Broad Historical Narrative During a Transitional Period in Civil Rights,” at the Applied Legal Storytelling Conference at Seattle University School of Law.

Professor Linda Demaine presented her paper, “Modernizing the ‘Reasonable Consumer’ Standard,” at the Law & Society Association Annual Meeting in Seattle, Washington, in May.

Professor Patty Ferguson-Bohnee will be honored as the Woman of the Year at the 2015 Arizona American Excellence in Leadership Awards. The ceremony will be held on November 19, 2015. Professor Ferguson-Bohnee is the faculty director of the Indian Legal Program.

Professor Orde Kittrie recently published an op-ed in The Wall Street Journal looking at Senate overrides of international agreements signed by the executive branch. In the piece, “Congress Can Rewrite the Iran Deal,” he wrote that the Iran nuclear agreement is not a treaty, so, “Congress should be comfortable sending one back for renegotiation.” Professor Kittrie is a former lead U.S. State Department attorney for nuclear affairs.

Associate Professor Rhett Larson produced an op-ed for the National Post that debates the question, “Can Canada responsibly export bulk quantities of fresh water?” Professor Larson sets forth three safeguards that “can help achieve a sustainable and responsible bulk water export policy.” His piece is also referenced in the article, “The Drilldown: Ontario seals deal with Hydro One workers,” on the Canadian news site iPolitics.

Professor Myles Lynk published the article, “Implications of the UK Legal Services Act 2007 for U.S. Law Practice and Legal Ethics” in the periodical, The Professional Lawyer. The article examines how changes to the regulation of lawyers and those who perform legal services in England and Wales point to possible adaptations for U.S. legal providers.

Associate Professor Troy Rule was quoted in a recent issue of the Arizona Capitol Times. The article focused on customers taking advantage of new utility-owned solar programs. Professor Rule is also the faculty director of the Program on Law and Sustainability.

Professor Michael Saks was the lead author of an amicus brief filed in the California Supreme Court concerning the challenge of bite mark evidence. The brief was cited in the Washington Post blog, “The Watch.” In April, Professor Saks was elected to the Executive Committee of the International Law Association, American Branch. He also published an article in the Summer 2015 issue of the Judges' Journal. Titled, "… and the courts have been utterly ineffective," the article looks at the problems courts face by discussing "deceased" forensic sciences that are no longer recognized as valid. The article was co-written with Ashley Votruba (JD Candidate).

Professor Rodney Smith was quoted by NBCSports.com and FoxSports.com in their coverage of the Gila River Arena lease and management agreement between the City of Glendale and the National Hockey League team, the Arizona Coyotes.

Regents’ Professor of Law Rebecca Tsosie was quoted in the Arizona Republic article, “For Native Americans, fight for gay marriage isn't over.” Professor Tsosie is also the Vice Provost for Inclusion and Community Engagement at ASU.

Michèle Huff (JD ’85) will teach a five-week class on mindful negotiating starting October 27 through the University of New Mexico’s continuing education program. The class is based on her book, "The Transformative Negotiator: Changing the Way We Come to Agreement from the Inside Out." She is an attorney with UNM working on technology, research, and intellectual property.

Kyrsten Sinema (JD ’04) will be the featured speaker at the meeting of the National Association of Women Business Owners, Phoenix Chapter on October 14. Sinema is the U.S. Representative from Arizona’s 9th Congressional District.

Justin Graham (JD ’15) was hired as an associate at Lewis Roca Rothgerber. Graham is in the business transactions practice group in Phoenix.

Lindsey Herzog (JD ’15) was hired as an associate at Lewis Roca Rothgerber. Herzog joins the litigation practice group in Phoenix.

Heather Todd Horrocks (JD ‘11) joined Ballard Spahr in Phoenix as an associate in the litigation department, where she advises clients in complex corporate and commercial litigation matters.

Blair Moses (JD ‘10) has accepted a job at the State Bar of Arizona to work as Attorney/Consumer Assistance Program (ACAP) Bar Counsel. She will handle intake and investigation of ethics complaints, and help with litigation.

Lea A. Phillips (JD ’11) is one of three finalists for the ATHENA Young Professional Award sponsored by the Greater Phoenix Chamber of Commerce. Phillips is an environmental law associate at Ballard Spahr. ATHENA finalists are selected for “their excellence in business and leadership, dedication to the community, and support and mentorship of other women.”