Of dreams referred: 'Holding it Down' mixes veterans' war stories with music, poetry

Whether it’s flashbacks to war’s nightmares or the lingering pain of battle injuries, the stories of soldiers bringing their trauma home with them are numerous.

We see these sad tales as regular reports in the nightly news, or building the narrative thread through documentaries highlighting the dark side of war’s other casualties — the walking wounded.

It’s easy to feel sympathy for these veterans. But empathy? That’s not always as simple.

That’s where the play “Holding it Down: The Veterans' Dream Project” can help.

A multimedia performance that combines music with the spoken-word poetry/testimonials of minority veterans, “Holding it Down” shares the lived experience of war through the prism of dreams — or nightmares.

“You might not be able to understand how to feel about the way someone feels, but everyone, whether you’re a soldier or not, can relate to dreams,” Decaul said. The performance starts at 7 p.m. Friday at ASU Gammage and serves as a buildup to the university’s Salute to Service, which runs from late October through Veterans Day.

Conceived in 2009 by Grammy-nominated composer-pianist Vijay Iyer and poet Michael C. Ladd, “Holding It Down” is an amalgam of approximately 35 post-9/11 veterans’ stories, dreams and aspirations told through an 18-song set of music and poetry.

The themes, imagery, sights and smells summon the horrors of the two wars with muzzle flashes and tracers, burning diesel and open sewers, suicide bombers and insurgents and sand and melting tar.

“Some of the dreams are dark — they just are — but you can’t talk about war and not have troubling images,” said Decaul, who served from 1997 to 2002, including a stint in Iraq. “War is always complex, and I saw some pretty tragic things.”

One of those incidents is recalled in Decaul’s “Shush,” a poem about a 60-ton M1 Abrams tank that accidentally veered through a bridge guardrail and into the Euphrates River, drowning the entire crew.

Former Air Force pilot Lynn Hill adds some levity at the end of the show with her hopeful poem “Dreams In Color,” which mirrors her personal experience as a veteran and drone pilot.

“The subject of drones are such a hypersensitive and complicated topic that I didn’t want to tell anyone I was in the military for a few years,” said Hill, who moved to New York after her stint in the military to pursue an entertainment career.

“I just wanted to be normal and blend in with the masses, and be invisible. I wanted my roses to be red, my violets to be blue, my grass to be green and to see trees. I don’t want life to be black and white or green, which is what the military wants you to see. I want it to be full of colors and hues.”

Aiding in the construction of that bridge of understanding between veterans and civilians is a Q&A session following the “Holding it Down” performance.

“While it’s true that only a very small part of the population serve in the military, we know there are many who are attached to those people,” Decaul said. “We don’t care if the audience is military or civilian. Our hope is to simply connect with people and open up lanes of conversation.”

Year One: Life at ASU – Shuo takes a break

"Year One: Life at ASU" is a periodic photo series following five freshmen navigating their first year at ASU. This installment checks in on Shuo Zhang as the student from China stays fit physically and mentally. See what Shuo was up to earlier in the semester in these past galleries:Year One: Life at ASU — Shuo gets to workYear one: Life at ASU — moving into the dorms... Year One: Life at ASU – Shuo takes a break

"Year One: Life at ASU" is a periodic photo series following five freshmen navigating their first year at ASU. This installment checks in on Shuo Zhang as the student from China stays fit physically and mentally. 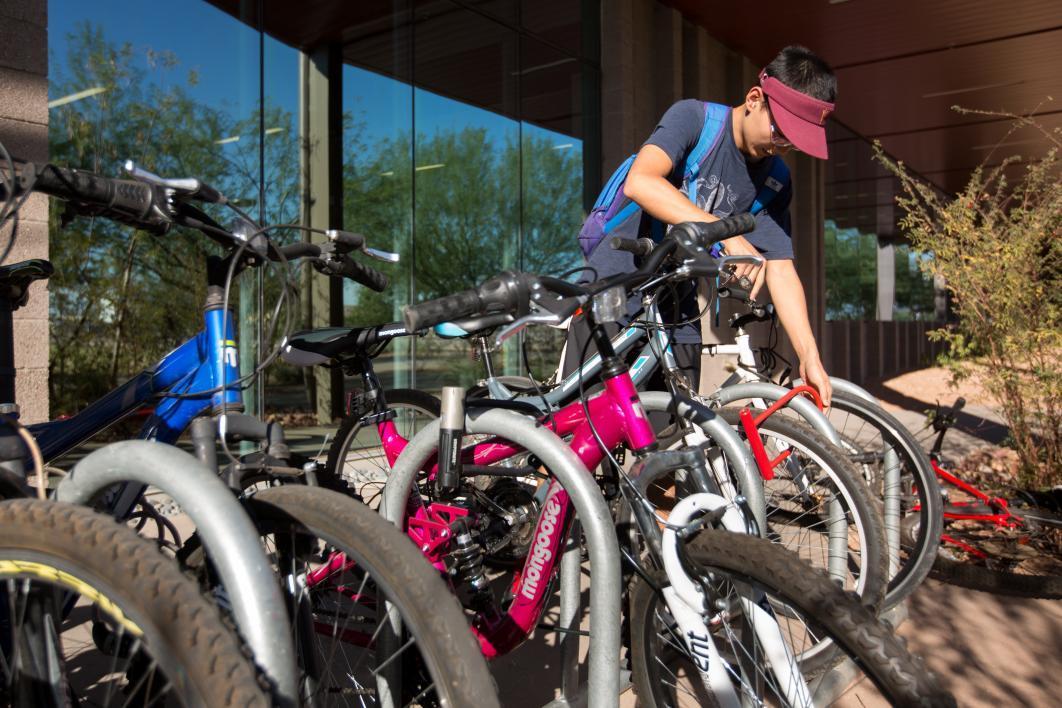 After a week of midterm tests, Arizona State University freshman Shuo Zhang goes for one of his regular workout sessions. Here, Zhang locks his bike at the Polytechnic campus’ Sun Devil Fitness Complex, on Friday, Oct. 2, 2015. It's time for a 2-hour workout. 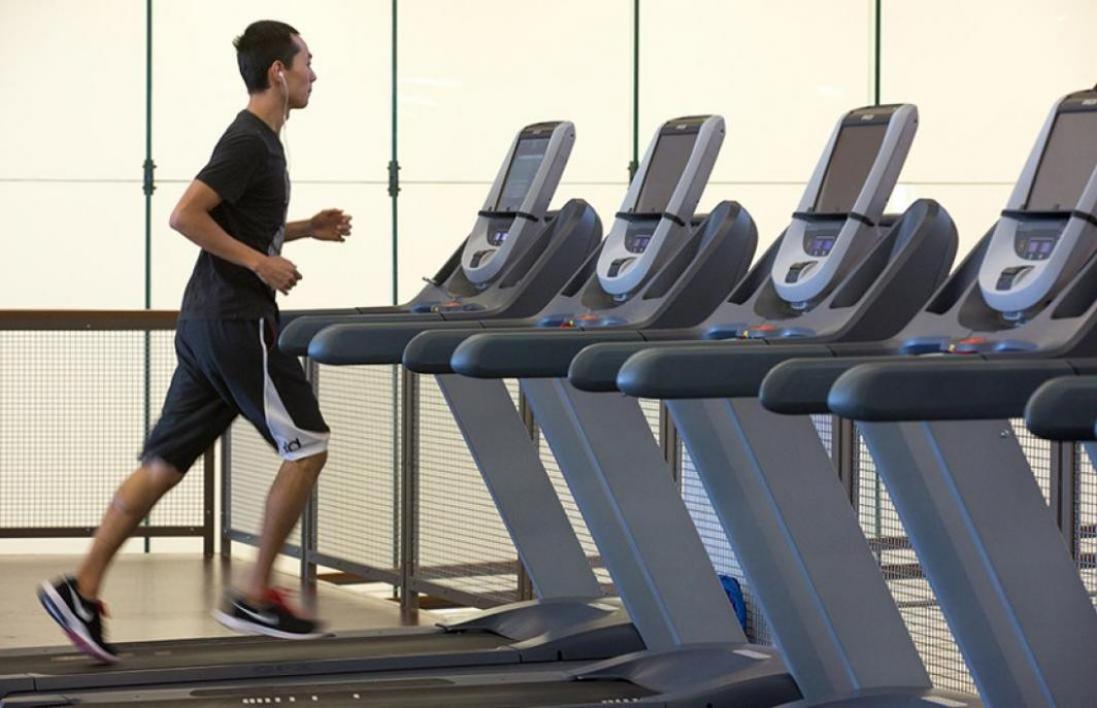 Zhang starts slowly, but builds up his speed during a 30-minute run on the treadmill. His usual routine is building up his pace to a "fast" run that he sustains for several minutes. After that, he slows the speed for a cool down. He says running is his favorite part of the workout — he was a member of his primary school's track team. 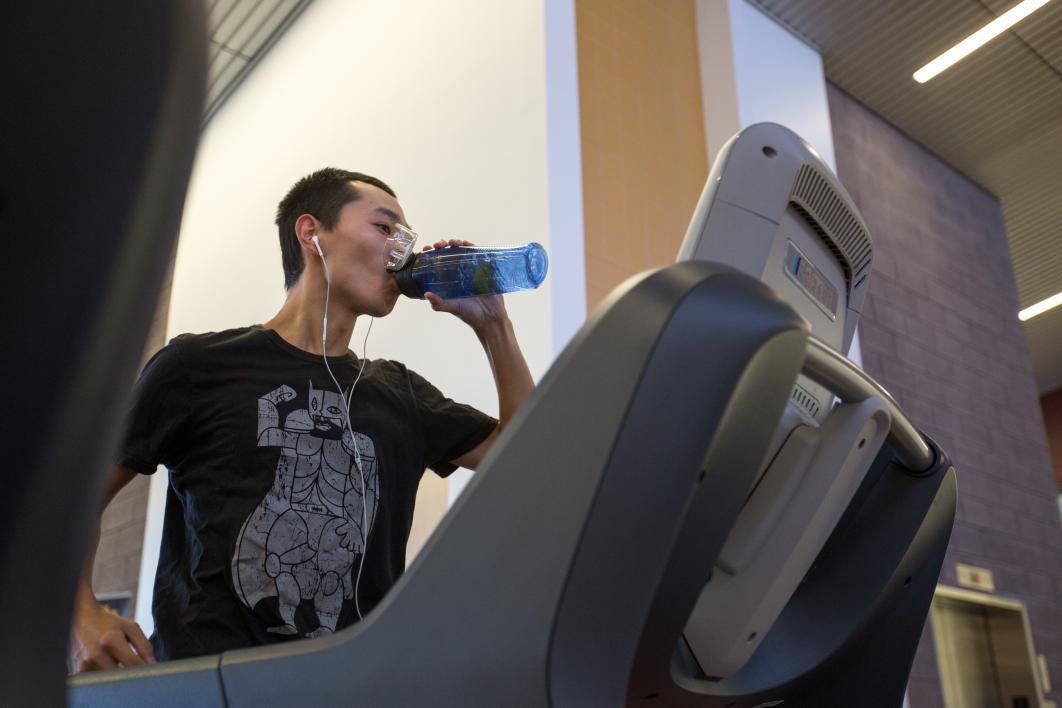 Zhang takes in some water after a stint on the treadmill at the Polytechnic campus’ Sun Devil Fitness Complex. Up next, 20 minutes on a recumbent bike before an hour or so lifting weights. 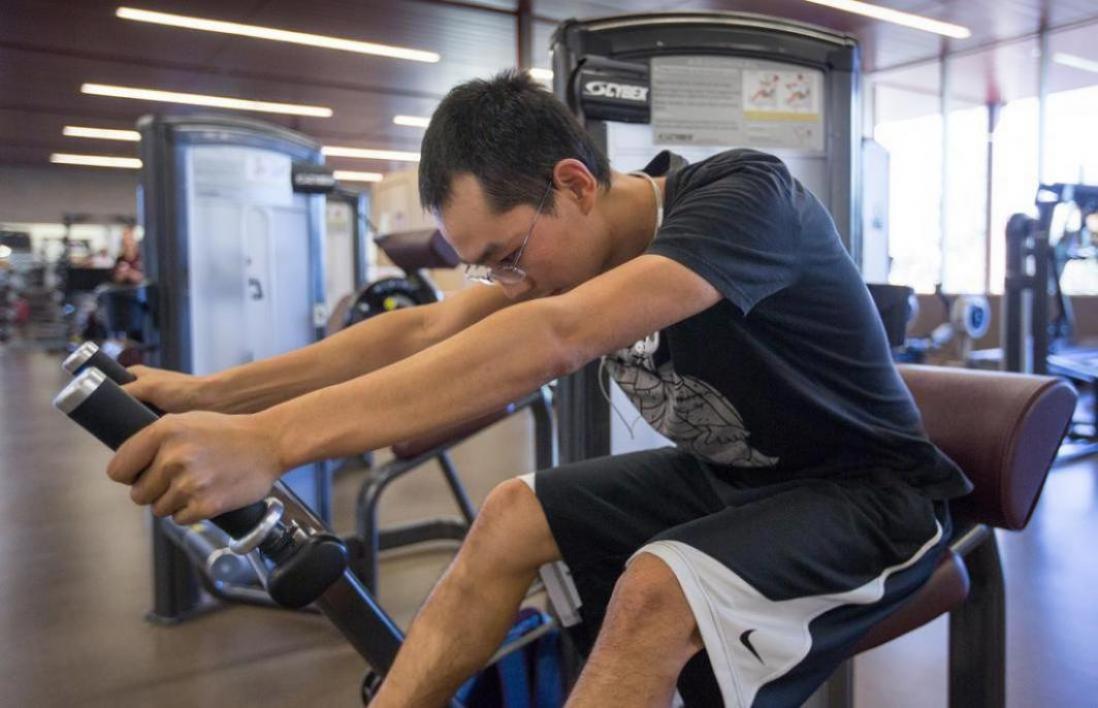 After finishing the cardio workout, Zhang works on his core with an abdominal machine at the Polytechnic campus’ Sun Devil Fitness Complex. "You know, I know I'm not that strong," he says. "I'm a little bit thin and I'm not a big guy, but I have muscles." 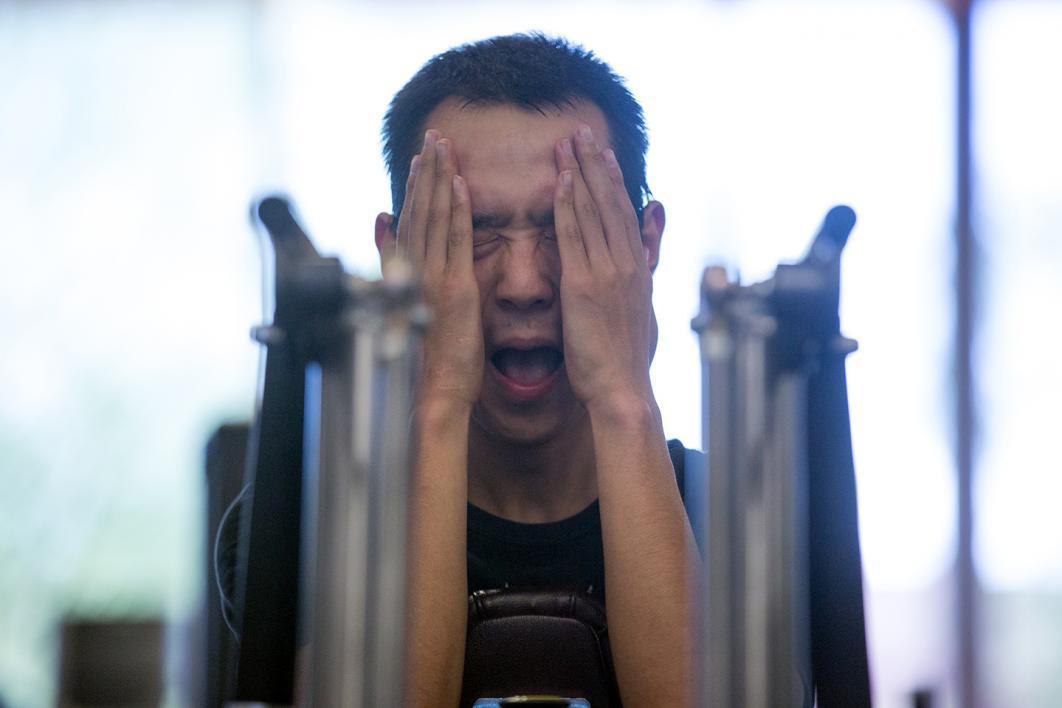 Zhang wipes the sweat from his eyes while working on the machines at the Polytechnic campus’ Sun Devil Fitness Complex. He says, with a laugh, "My mom said I'm not throwing up, so I need to work out harder." 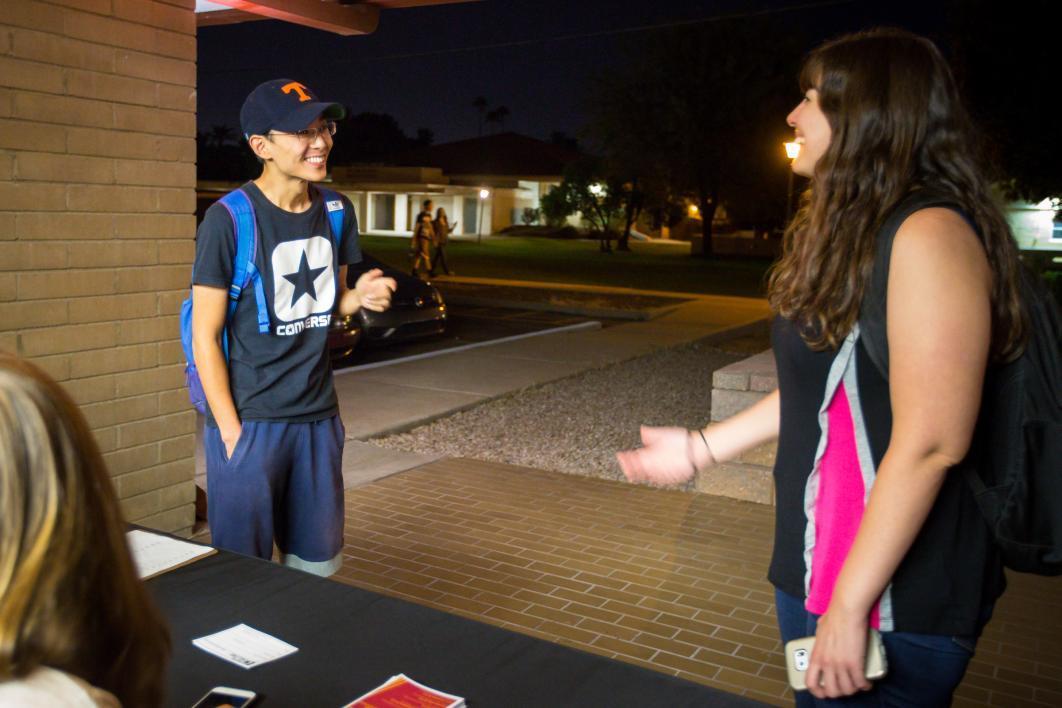 Right after finishing the midterm test for his German class, Zhang arrives at Christian Challenge on Oct. 8, 2015. The evangelical group is a national collegiate program affiliated with the Southern Baptist Convention that aims to connect college Christians with the community. 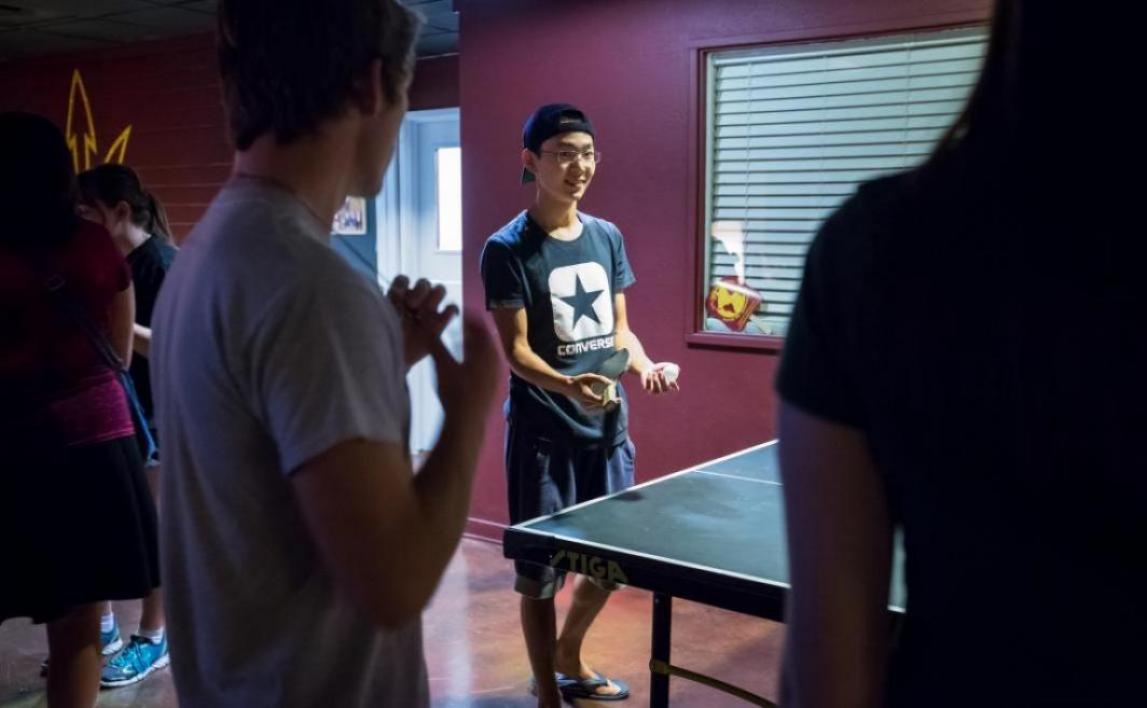 Zhang takes a turn on the pingpong table before the Christian Challenge worship service begins. He learned how to play table tennis from his father, who he says is really good at the sport 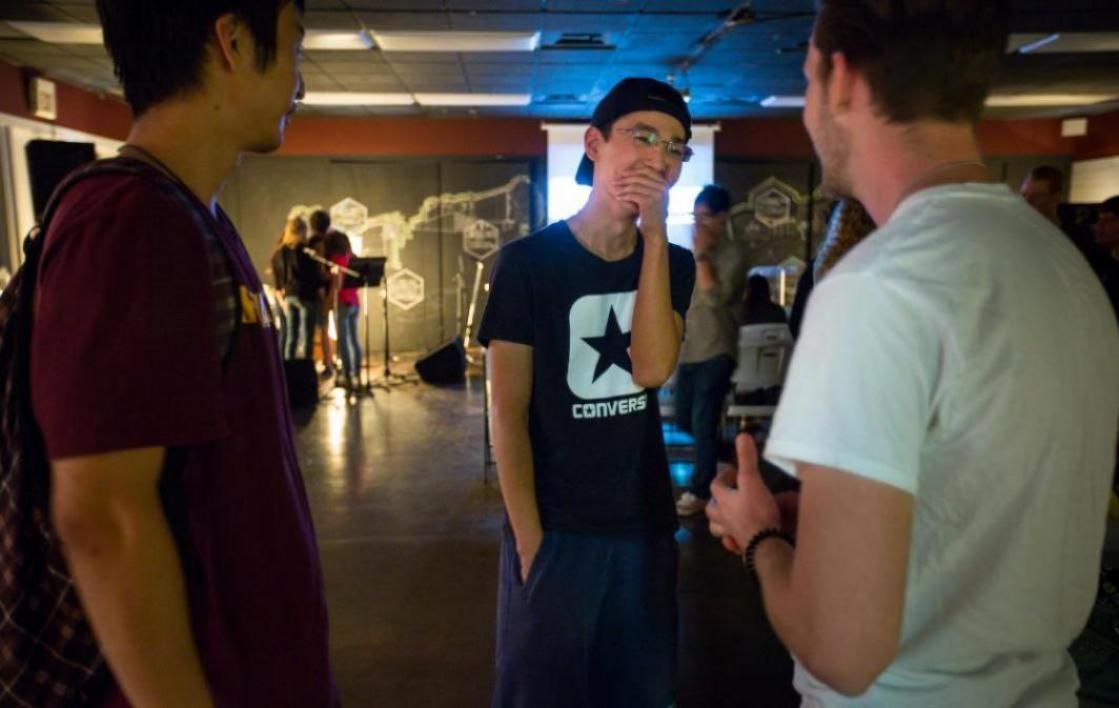 Zhang cracks up while talking with Brandon Reimus at the Christian Challenge worship night. Reimus is a senior in Interdisciplinary studies, with emphasis on philosophy and sociology. Zhang says the people at these Christian Challenge events are really nice and he enjoys his time with them. Zhang joins more than 50 other students at the Christian Challenge worship night. He says Christianity is not common in China, but he was well aware of the religion's foundation.

"Before I came here I knew about the Bible and Jesus. I like that it's about love and forgiveness. It's not a bad thing, so why not give a try?" 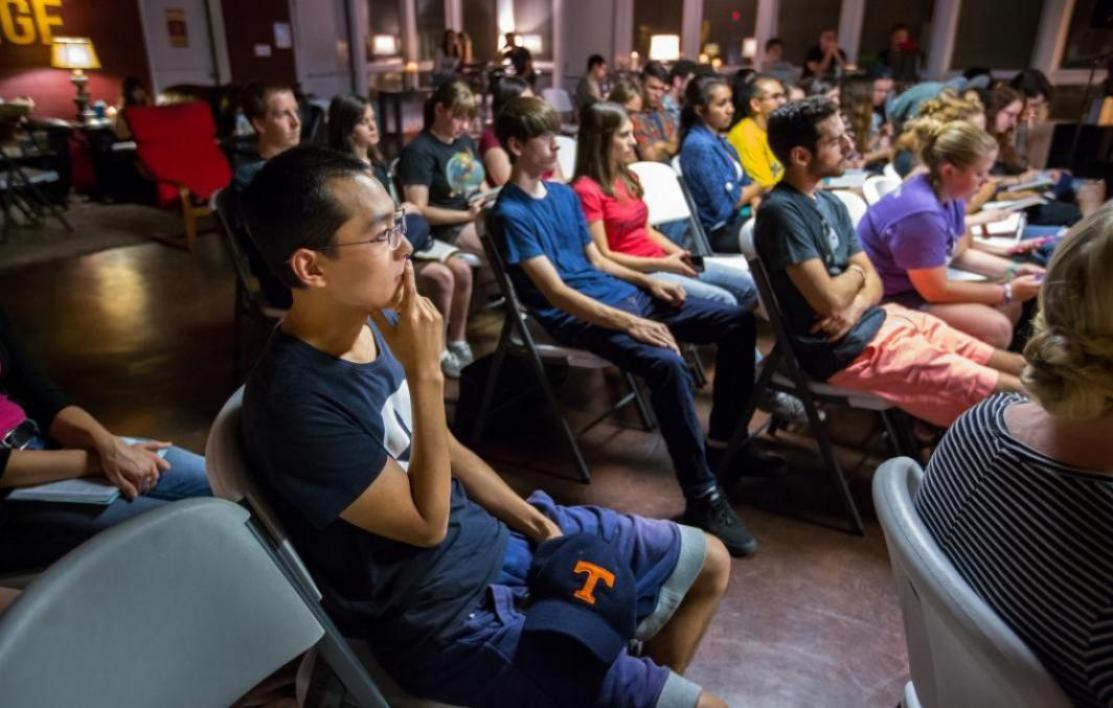 Zhang listens to a talk on the Book of John at the Christian Challenge worship night on ASU's Tempe campus. He will need to leave before the social games in order to catch a shuttle back to his Polytechnic campus residence.

See what Shuo was up to earlier in the semester in these past galleries:

Year One: Life at ASU — Shuo gets to work