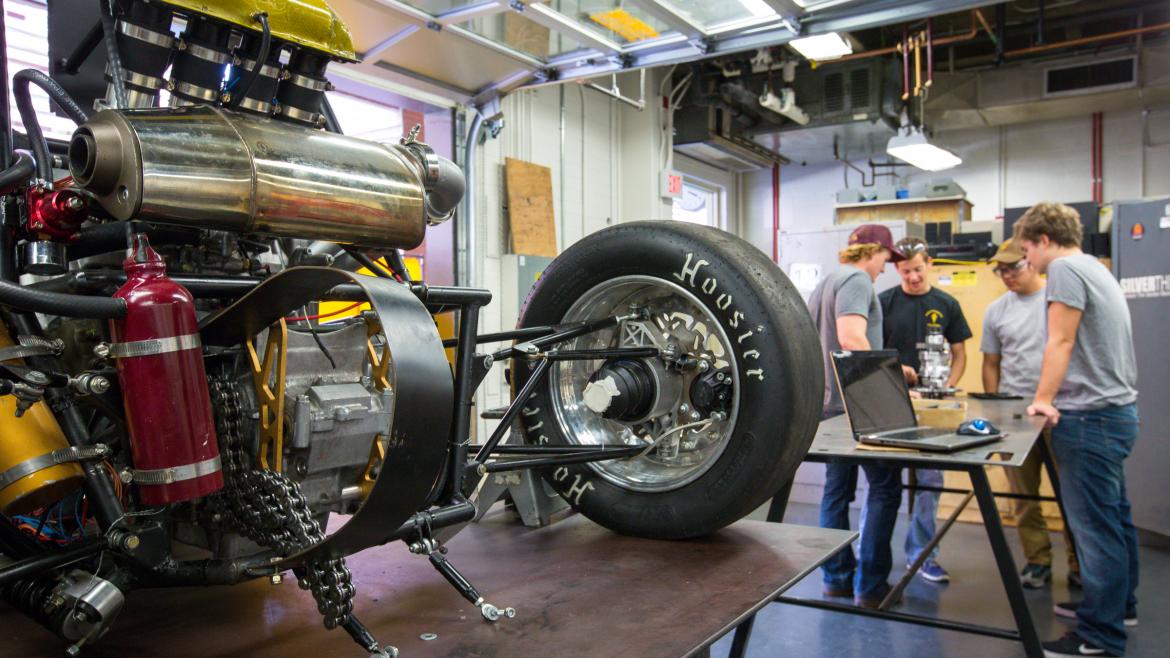 Tempe Drift: How an underdog student engineering team is building a race car from the ground up

On a mid-September Saturday morning, a band of engineering students gathered in a noisy shop on Arizona State University’s main campus to begin building a race car.

The university donates shop space and some faculty advisers. For design, management and money, “we’re on our own,” said chief engineer Wes Kudela.

But whatever else they lack, the 110 members of ASU’s Formula SAE team — students in the Ira A. Fulton Schools of Engineering — have passion in spades.

“I want everyone in here to learn engineering,” Kudela said. “I love it, and I want to give that opportunity to other people.”

Some of the students in the shop have come to ASU specifically to join this club.

Formula SAE is a student design competition organized by the International Society of Automotive Engineers(now known as SAE International). Competitors are expected to operate as car manufacturers. They have to master all aspects of business: research, design, manufacturing, testing, developing, marketing, management and fundraising.

Every single step is documented, down to how many times a single bolt is turned. “If you don’t document it, you lose points,” Kudela said.

Competition is much more than show up, win and bring home a trophy. Cars are judged in eight events: design; cost and manufacturing analysis; presentation; acceleration; skidpad; autocross; fuel economy; and endurance. 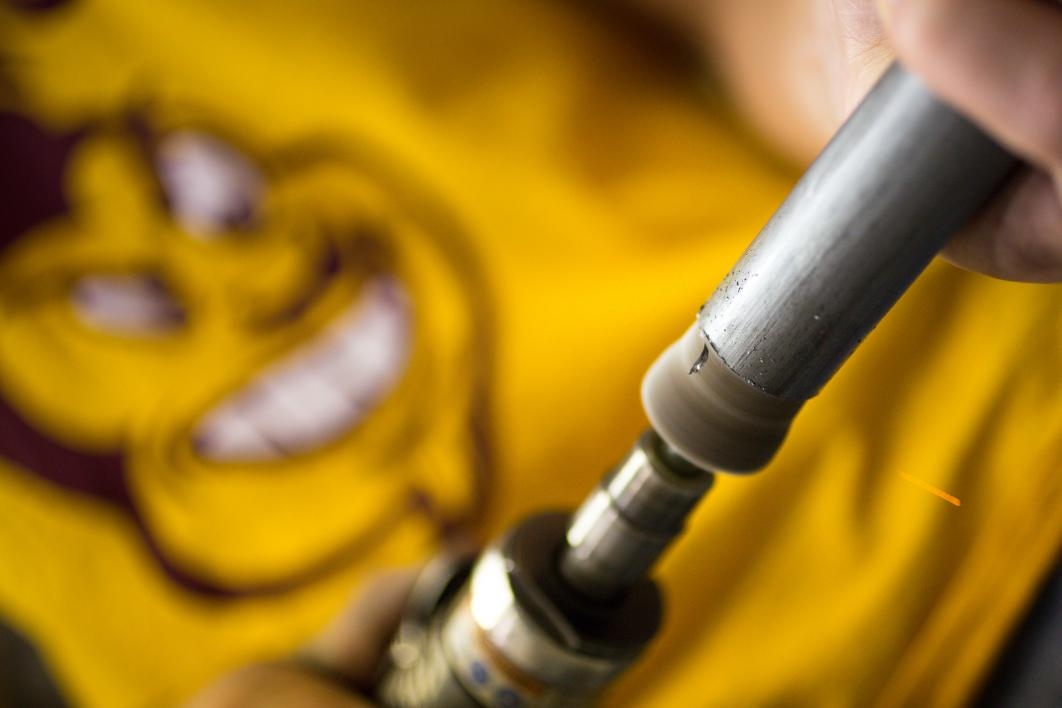 ASU mechanical engineering freshman Charlie Ruckman takes the burrs off a freshly cut pipe as he and more than 100 other automotive engineering enthusiasts — members of ASU’s Formula SAE club — begin building this year’s Formula-style race car on the Tempe campus Oct. 3. The student club meets weekly throughout fall and spring semesters to create a Formula-style car that will race in June. 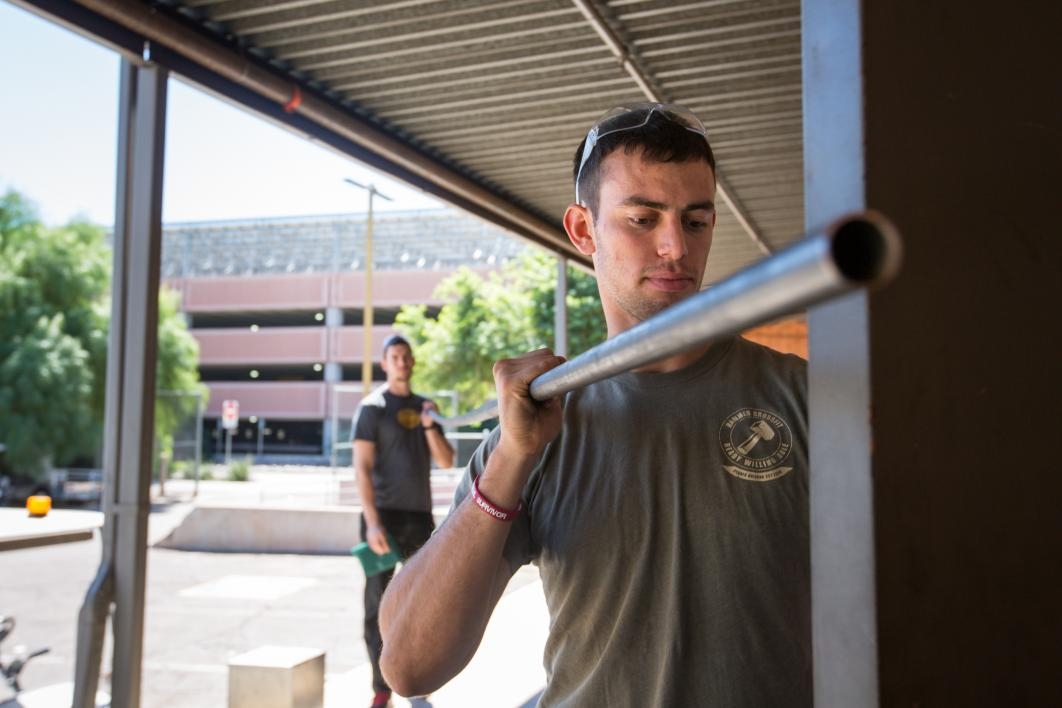 Daniel D'Ippolito (right) and Chris Hughes on Oct. 3 carry in the first of many 20-foot-long chromium-molybdenum (or chromoly steel) pipes that will be cut into pieces for the race car's chassis. Both D'Ippolito and Hughes are seniors in mechanical engineering in the Ira A. Fulton Schools of Engineering. 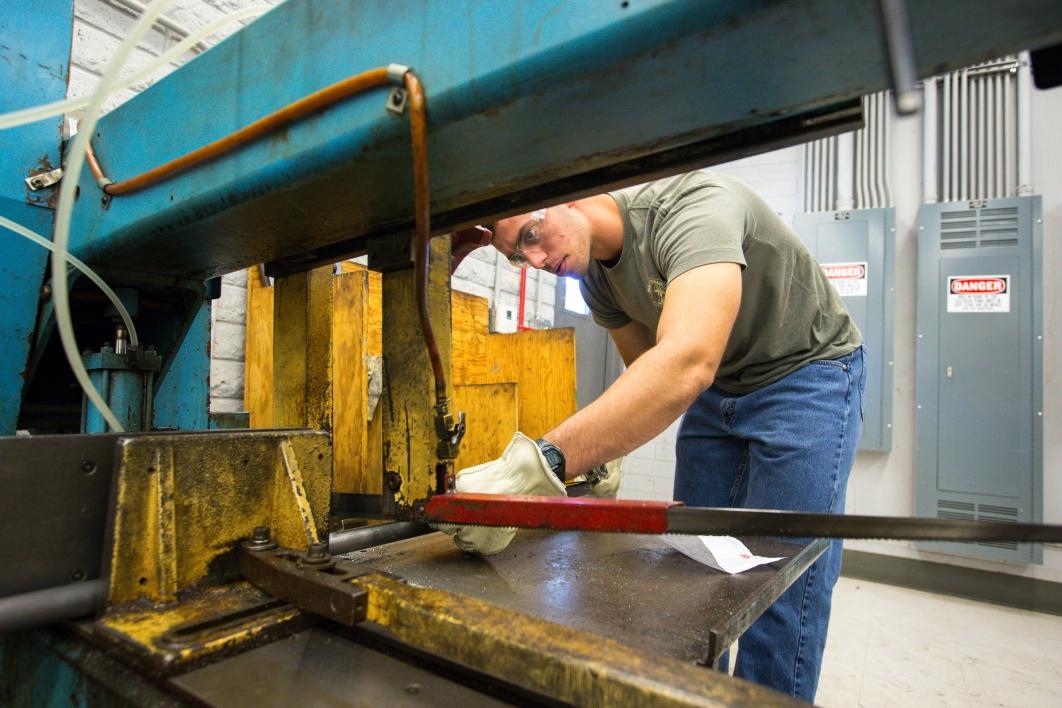 Daniel D'Ippolito cuts the 20-foot pipe for the first piece of the chassis Oct. 3. The students hope to complete their car, from first-sketch design through testing, in time to compete at the Formula SAE race in June in Lincoln, Nebraska. Measure twice, cut once: Careful use of supplies is crucial for the team, which is still raising funds. So far team members have $3,000 in the bank; last year's car cost $24,000 to build, and they expect this year's to require more money. All team members are responsible for approaching potential donors. Fundraising is one of the business aspects that Formula SAE competitors must master. 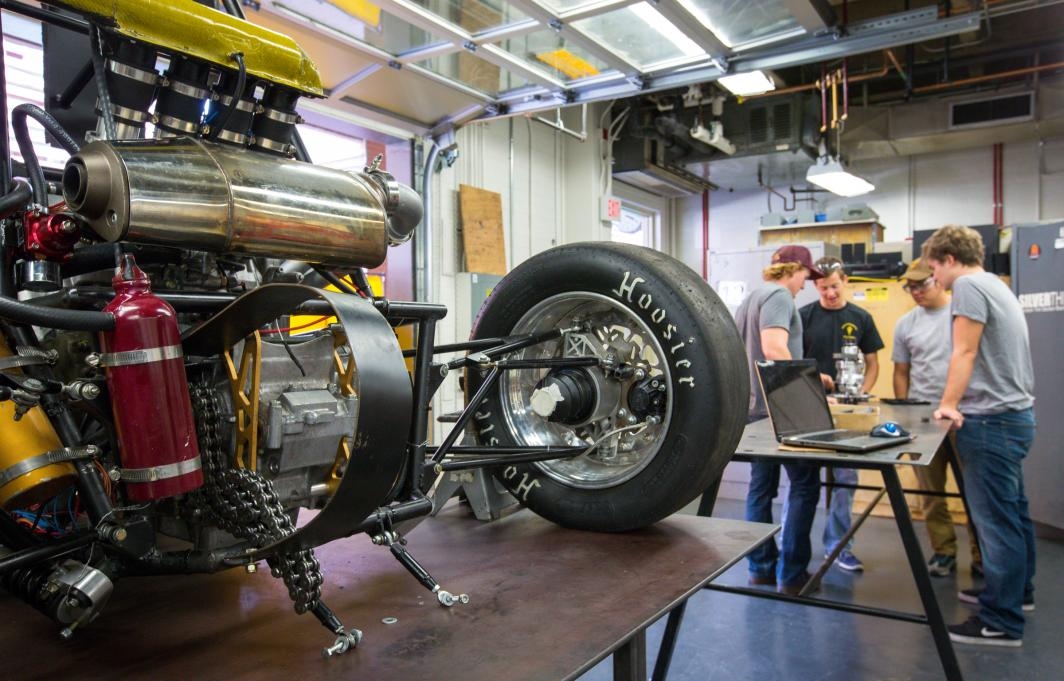 Mechanical engineering students figure out how they'll improve the rear differential from last year's car (left) as they begin building this year’s race car Oct. 3. The students want to first repair the differential so it can be used in last year's car for the Homecoming parade. Afterward, they'll rebuild the piece, with mostly new components. 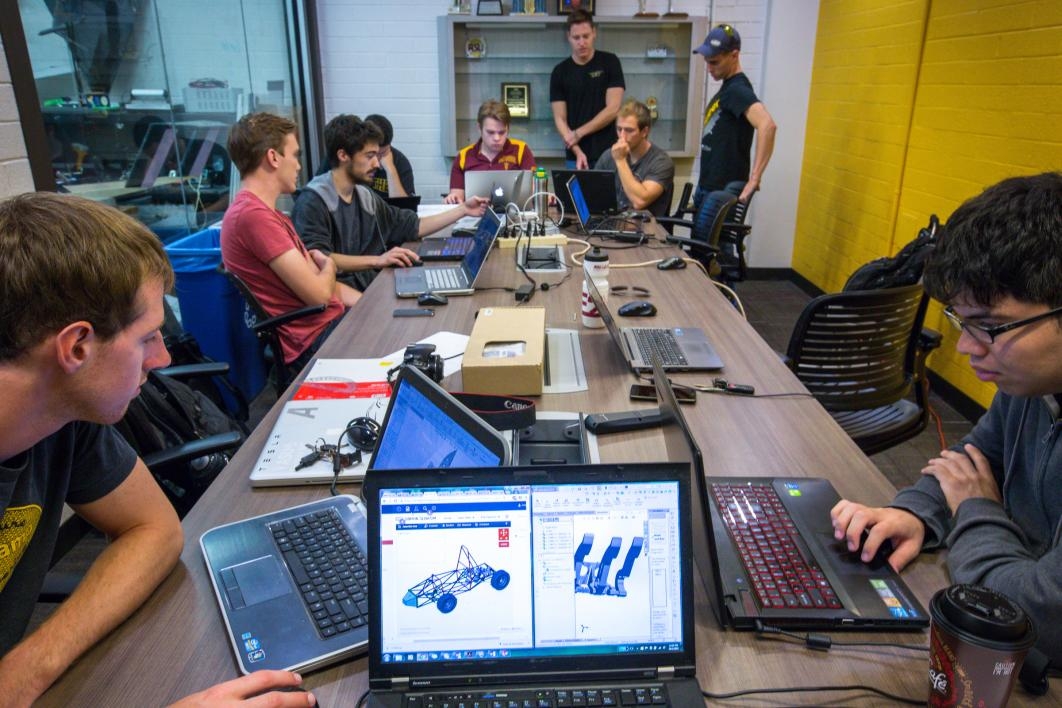 The aero team gathers in an adjacent office to use CAD (computer-aided design) software to model the car's body pieces, making sure they are optimized for handling, aerodynamics and tweaks to the chassis Oct. 3 on the Tempe campus.

The concept behind the competition is that a fictional manufacturing company has contracted a design team to develop a small Formula-style race car. The prototype is to be evaluated for its potential as a production item. The target consumer is the non-professional weekend autocross racer.  Each team designs, builds and tests a prototype based on a series of rules.

Ninety percent of the car will be built in-house. Some machining and laser cutting will come from outside fabricators. It will be a Formula-style car, not a Formula One car. The similarities are that both are single-seat cars, built to a specific set of rules.

There are three differences: ASU’s car will be smaller. It will not cost $2.6 million, the typical cost for a Formula One car, according to Autoweek. And, Kudela said, “the performance is not anything like a Formula One car,” which can hit speeds up to 220 miles per hour.

There is a fourth difference. This team isn’t out for money, prestige or laurels. They want better performance and a more functional team than last year.

“I want everyone on this team more successful as an engineer,” said Kudela. He interned last summer at Tesla and credits his participation in Formula SAE with earning that internship. “It’s not they come once, get bored and leave. Our goal is to take this momentum from the last build and go forward. Our goal is to keep the team motivated.”

Chrysler, Tesla and Ford all come to ASU to recruit. They will also be at the FSAE race in Lincoln, Nebraska, in June.

“These companies come to competition and see how your school does,” Kudela said.

Many companies won’t hire engineering grads unless they joined FSAE. Some club alums are now engineers at Tesla. “It’s a leg up,” Kudela said.

Taser, the electrical-weapon company, donated the $3,000 the team currently has. Sponsors can range from family members who donate a few hundred bucks to Chrysler ($12,000 last year) to local businesses like Industrial Metal Supply, which donated chromoly steel for the chassis.

“One of the things we struggle with is building the business side of the club,” said team manager Troy Buhr. The team will need more than the $24,000 it spent last year. All members of the team — which maintains a Facebook page — are responsible for approaching potential sponsors. “We want to make sure you know how to communicate thoroughly,” Buhr said.

“We want to make sure we’re not keeping engineers in the corner,” Kudela added.

Eight different teams collaborate on the project: engine, vehicle dynamics, drive, aero, brakes, data acquisition, systems and computer-aided design. Each subteam has a leader and a vice leader. They are responsible for recruiting members within the club to their subteam. The leader keeps the spreadsheet organized.

“You have areas of responsibility,” Kudela said. “It keeps people accountable.”

Last year they moved too slowly and didn’t have enough time to test the car. This time, they want to finish the build by January so they can begin testing and improving the car. They designed and built a new suspension over the summer and started fabricating the chassis, which they want complete by Homecoming. Now they’ll start designing and engineering all the other components on the car in preparation for the mid-June race.

“We’ll have a semester to fix it and make it better,” Kudela said. “There is a ton of engineering going into fixing the problems with this (last year’s car).”

“Now we want to make the car better,” Buhr said.

“That is the challenge,” Kudela said. “You sit in front of judges and say this is why you should buy our car.”

The road to Lincoln begins.

Editor’s note: This is the first installation in a yearlong series. Look for the next story Nov. 5.

Kathy Peach has fulfilled two of her lifelong dreams.Dream One: She attended ASU and Barrett, The Honors College, earning a degree in early childhood/early childhood special education in 2014.Dream Two: She wrote and published a children's book, "The Tiniest Tumbleweed," that will be available in bookstores this January. The book is available for pre-order through publisher Little Five Star, Ama... 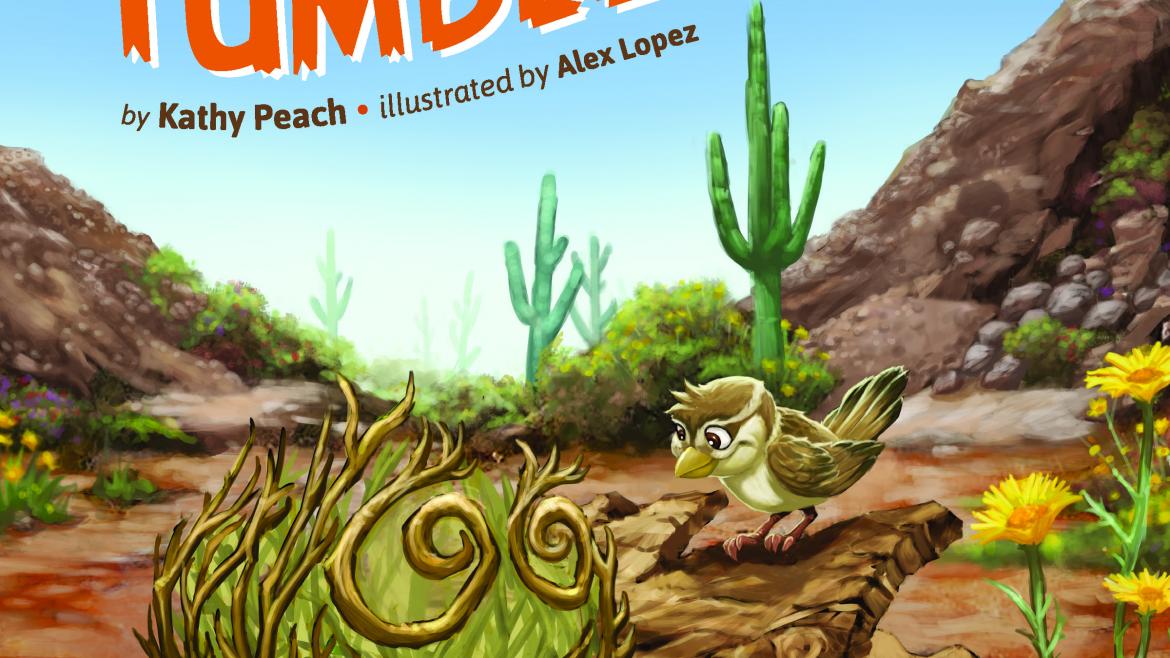 Kathy Peach has fulfilled two of her lifelong dreams.

Dream One: She attended ASU and Barrett, The Honors College, earning a degree in early childhood/early childhood special education in 2014.

Dream Two: She wrote and published a children's book, "The Tiniest Tumbleweed," that will be available in bookstores this January. The book is available for pre-order through publisher Little Five Star, Amazon and Barns & Noble.

Her path to these goals began in 2009 when Peach, a Nashville, Tennessee, native, moved from her home of 52 years to Arizona so she and her husband could be closer to their daughter.

After careers in banking and project management, Peach decided to go back to school and enrolled in Chandler-Gilbert Community College.

She said three life-changing things happened while she was at CGCC: She attended a children's literature class, attended a psychology 101 class and enrolled in ASU and Barrett, The Honors College.

In the psychology class, Peach learned of theorists such as Albert Bandura whose work in self-efficacy teaches that everyone has the capability to achieve. More simply, Bandura focuses on how people's belief in themselves spur them to take action.

In Barrett, Peach found a way to combine her interest in writing with Bandura's notions of self-efficacy. She decided to write a children's book as her honors thesis project.

"It was through Barrett that the two concepts were united and my first children's picture book, 'The Tiniest Tumbleweed' was created," she said. "It's really hard to say whether the thesis drove the book or the book drove the thesis."

Following the completion of her honors thesis, Peach found publisher Little Five Star and modified her story into "The Tiniest Tumbleweed," an illustrated 40-page book for children ages 3 to 7. The book was edited by Conrad Storad, author and editor of more than 50 science and nature books for children and young adults. Alex Lopez, a self-taught artist who has worked in the video game industry and for Disney Interactive and Dynamite Comics, provided illustrations.

The book focuses on two Sonoran Desert characters — a tiny tumbleweed and an equally small house sparrow — who find strength in their own capabilities. The book delivers a positive message to young readers about overcoming obstacles and being helpful to others.

"It's a super-sweet story with an important message to children of all ages — believe in your capabilities, do the work necessary to become your best self and serve others, " Peach said.

Peach attributes her ability to produce a high-quality children's book to the development of her own capabilities as a Barrett student.

"Because of the Barrett experience, I feel very confident in the quality of the story. There is a certain amount of pride that results in being able to tell a publisher that your work is backed by a 70-page honors thesis. There's credibility in that statement. Barrett provided me the opportunity to earn that credibility," she said.

As for the future, Peach is considering writing a sequel.

"Book number two is rolling around in my head," she said.

Peach offers this advice to Barrett students who hope to use their honors theses as catalysts to achieve their dreams.

"First and foremost, believe in the dream," Peach said.

"Second, take advantage of every opportunity Barrett affords. Glean every ounce of widsom you can from your professors. Last, but not at all least, start thinking about your business plan. Taking a product into the market is a pretty big deal. It takes perserverance, stamina and capital. Start thinking about building capital sooner rather than later."