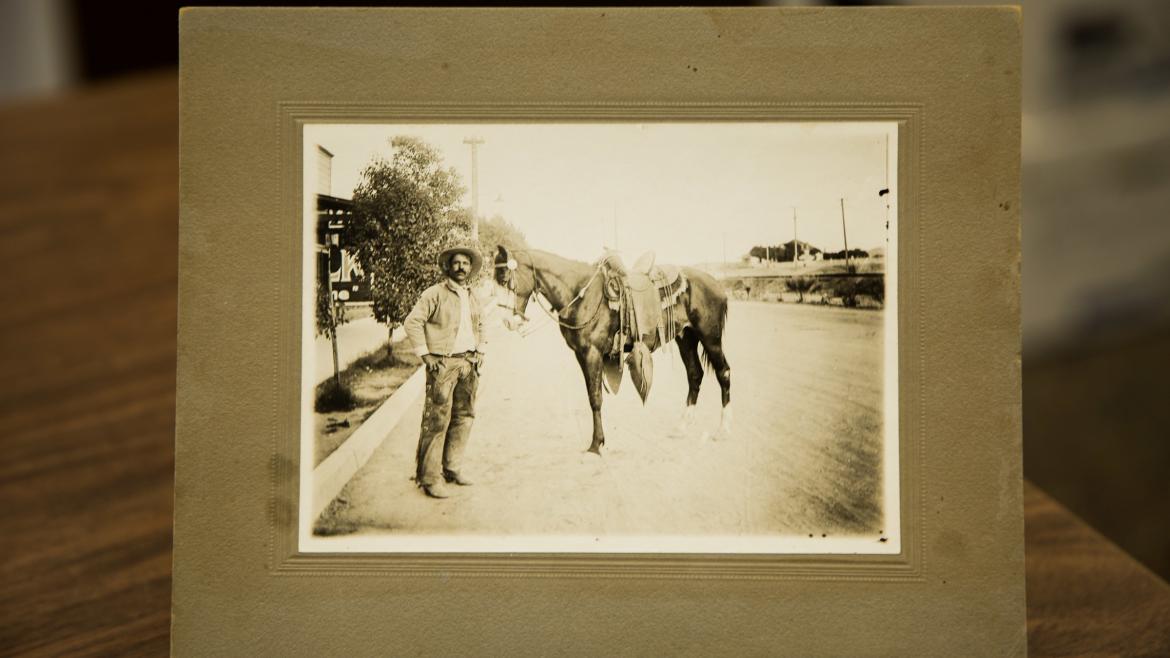 Editor's note: This feature is part of a series of stories to mark Hispanic Heritage Month, which runs Sept. 15-Oct. 15.

When Nancy Godoy began researching her family tree, she ran into some roadblocks.

“My family couldn’t remember who some family members were anymore,” she said.

That’s the problem with not documenting history — it can get lost or forgotten. Godoy's work at Arizona State University is aimed at making sure that doesn't happen for the Chicano community as a whole.

As the curator of the Chicano Research Collection at ASU’s Hayden Library, Godoy spends hours sifting through crumbling photos, decades-old campaign pins, protest pamphlets and other such Chicano"Chicano" refer to Mexican-Americans or those of Mexican heritage. "Hispanic" to countries (or their peoples) originally colonized by Spain. "Latino" is close in meaning to "Hispanic" but includes countries such as Brazil. culture memorabilia, all in the name of preserving the “collective memory of a community that is under-documented.”

This year, the collection celebrates its 45th anniversary. It was established in 1970, at the height of the Chicano Movement, in response to student and faculty demand for academic resources that reflected their personal experiences. 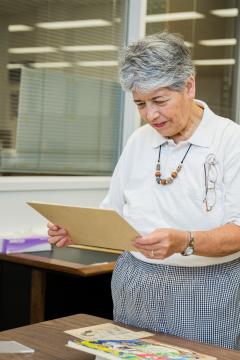 Christine Marin (left, pictured Sept. 4) was working in Hayden Library's bibliography department at the time when Bill Axford, then the library's new director, and Manuel Servine, who had been recruited from the University of Southern California to teach Chicano history for the first time at ASU, tapped her to be the bibliographer of the collection.

“I met Dr. Servine, I met Dr. Axford, and the two of them said, ‘Chris, do you want to be the bibliographer of the Chicano studies collection?’ ” Marin recalled. “I said, ‘Yes. What do I do?’ ”

Servine responded by handing over to Marin several bibliographies of Chicano books and sources he had prepared before coming to ASU. Along with student workers, she went through each list, checking to see what the library had and what it did not, which they then ordered.

Although academic resources were great, Servine thought the collection needed a little something extra. He told Marin to go out with her student workers and start bringing back pamphlets, posters, pins and whatever else they could find at local protests, gatherings and Mexican-American Student Organization meetings on campus.

“Little by little, we would start collecting all of this ephemera that would reflect something that was going on at the time,” Marin said. “So here I am, inching myself closer to that telephone pole, crowd over there … yanking the poster off the telephone pole, rolling it up, and saying, ‘Here, take it! Take it to the car! Hurry!’ 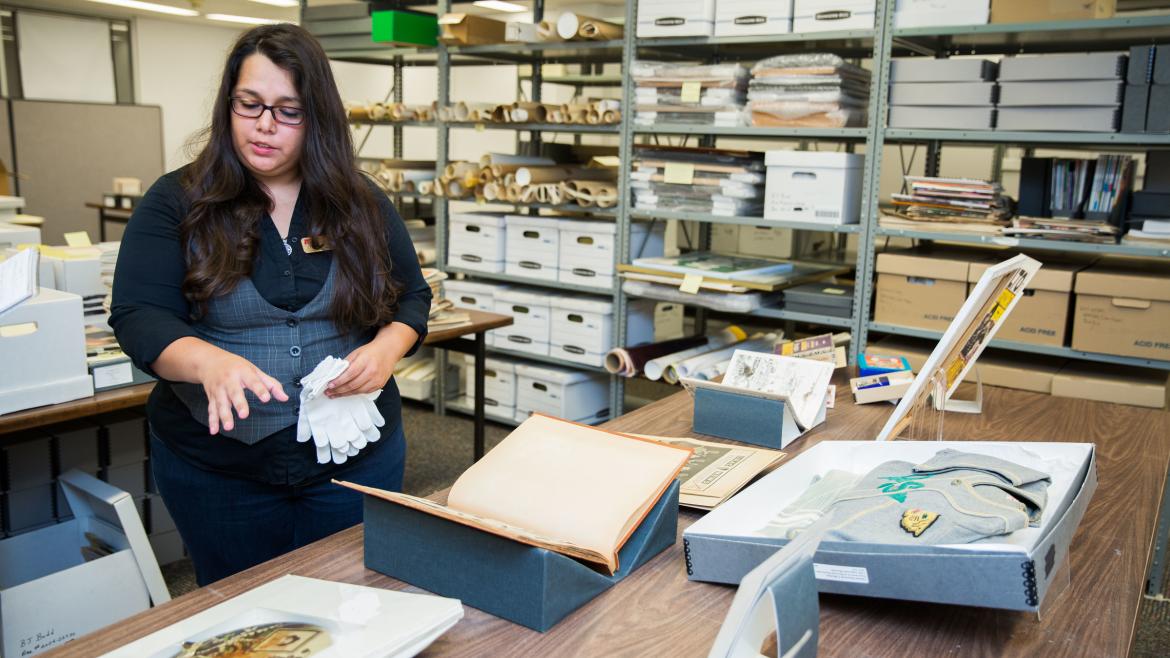 As the collection grew, Axford dedicated a space in the library for it with chairs and tables and couches. Servine invited Marin to speak at the beginning of his classes about the collection, and to encourage students to utilize it.

When they inevitably did, Marin instructed them on how to use the library’s tools to find what they needed.

Today, Godoy continues Marin’s work by teaching students and faculty how to use the collection, which has grown to be the largest repository in Arizona for Mexican-American and Chicano history, with more than 1,500 linear feet of material that focuses on labor, education, civil rights, immigration and politics.

Godoy also does community outreach to spread the word about the collection and, hopefully, continue adding to it, as members of the Chicano community are encouraged to donate to it.

In fact, Arizona Congressman Ed Pastor recently donated nearly 200 boxes of artifacts documenting his career as a member of the Maricopa County Board of Supervisors and as Arizona’s first Latino U.S. Congressman.

“The collection gives the community a sense of pride,” she said, adding that her motto is “engage, educate, empower.” 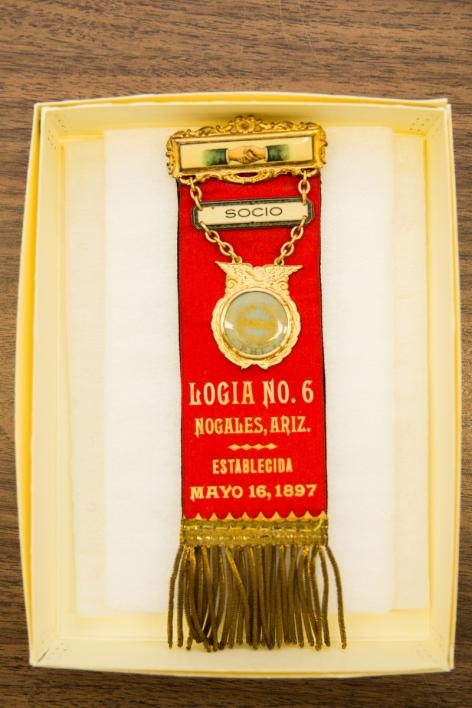 Established in 1894, Alianza Hispano Americana was the first Mexican-American fraternal mutual-aid society in Arizona. In the 1950s, members focused their efforts on civil-rights issues and helped desegregate schools and public facilities. The bibliography was created by Christine Marin, founder of the Chicano/a Research Collection. At first, the collection only contained reference books that reflected the current philosophy of the Chicano Movement. 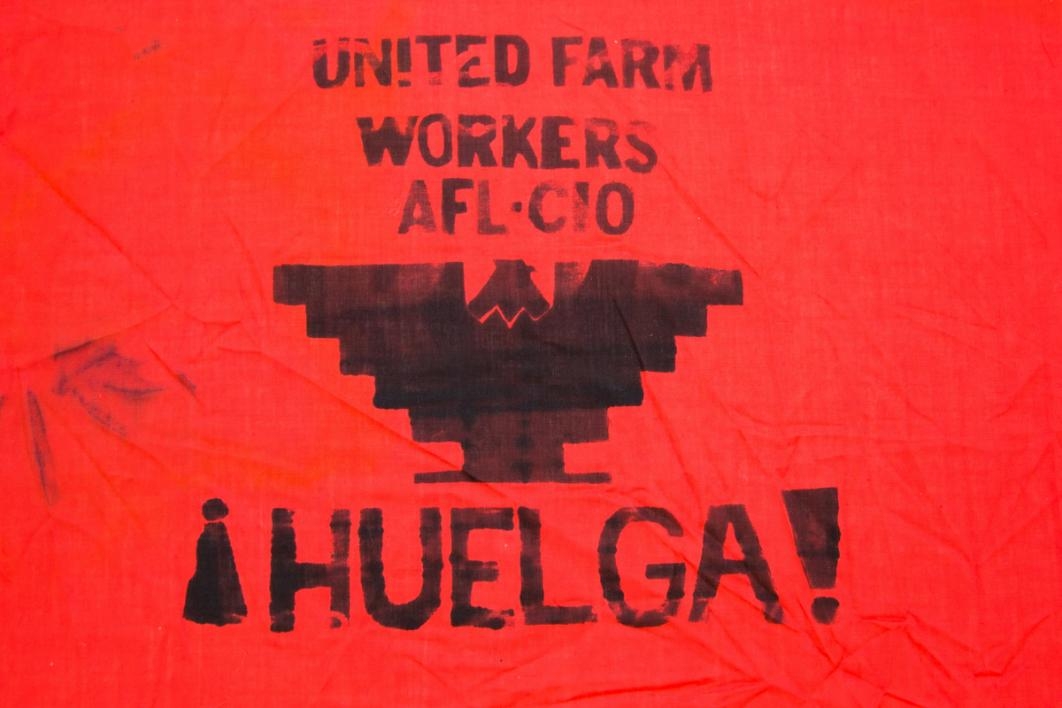 The UFW flag became a symbol of pride and strength for Mexican-American farm workers who organized in Arizona and the Southwest. 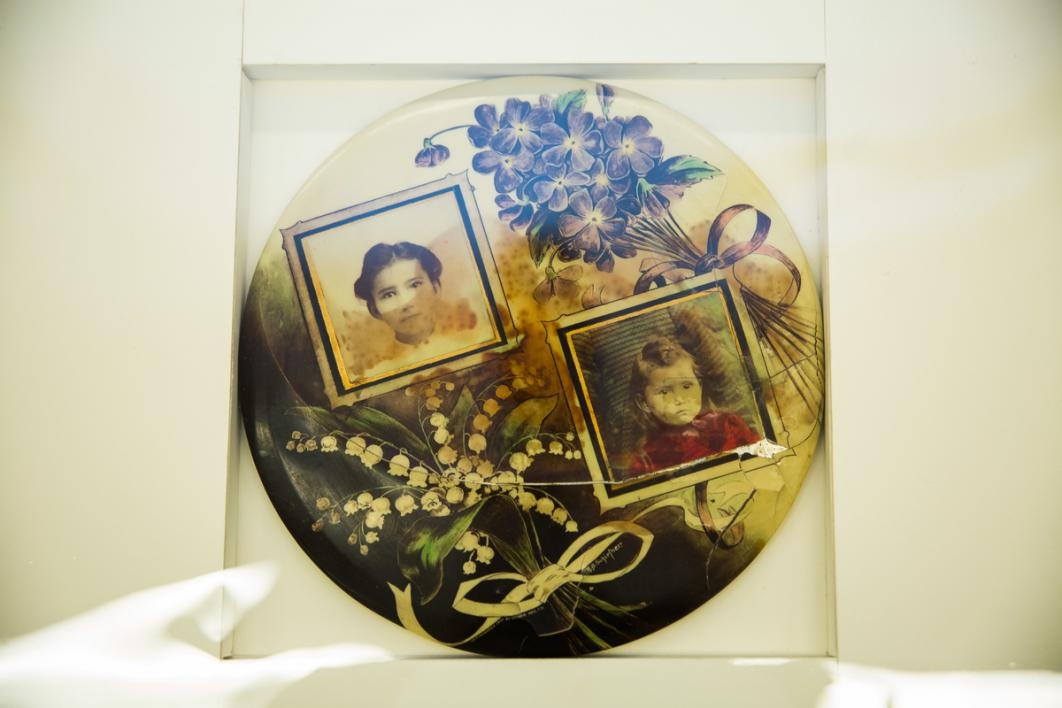 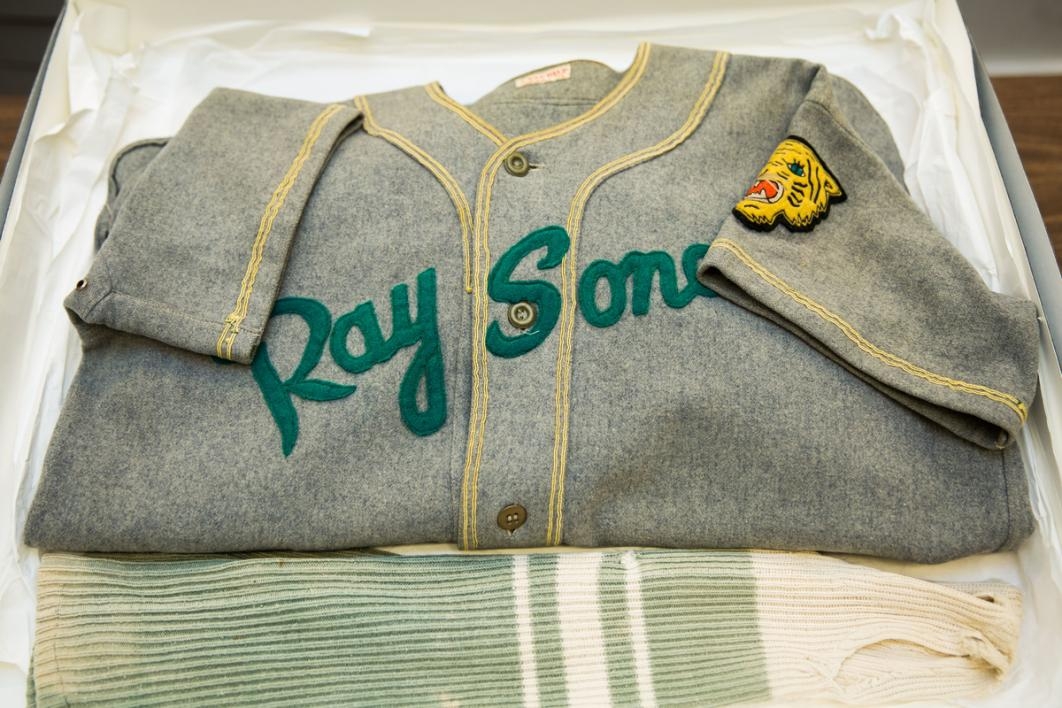 A baseball uniform that was worn by a Mexican-American team from Arizona. At that time, residential segregation was common in mining towns. 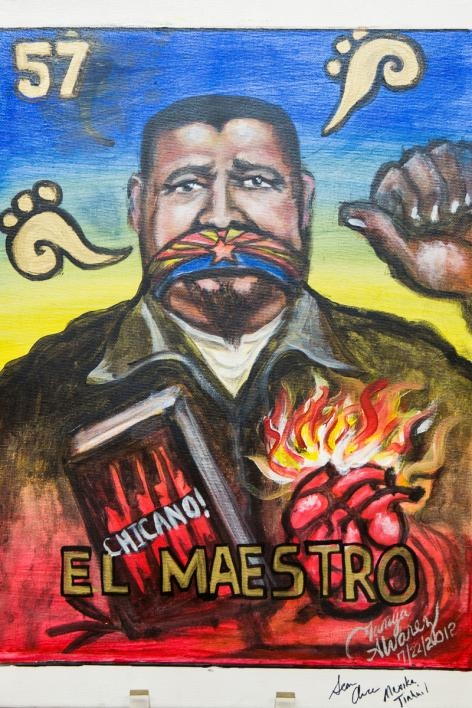 A painting of Sean Arce, former head of the Mexican-American Studies Program for the Tucson Unified School District. The artwork was created by local artist and community activist Tanya Alvarez. 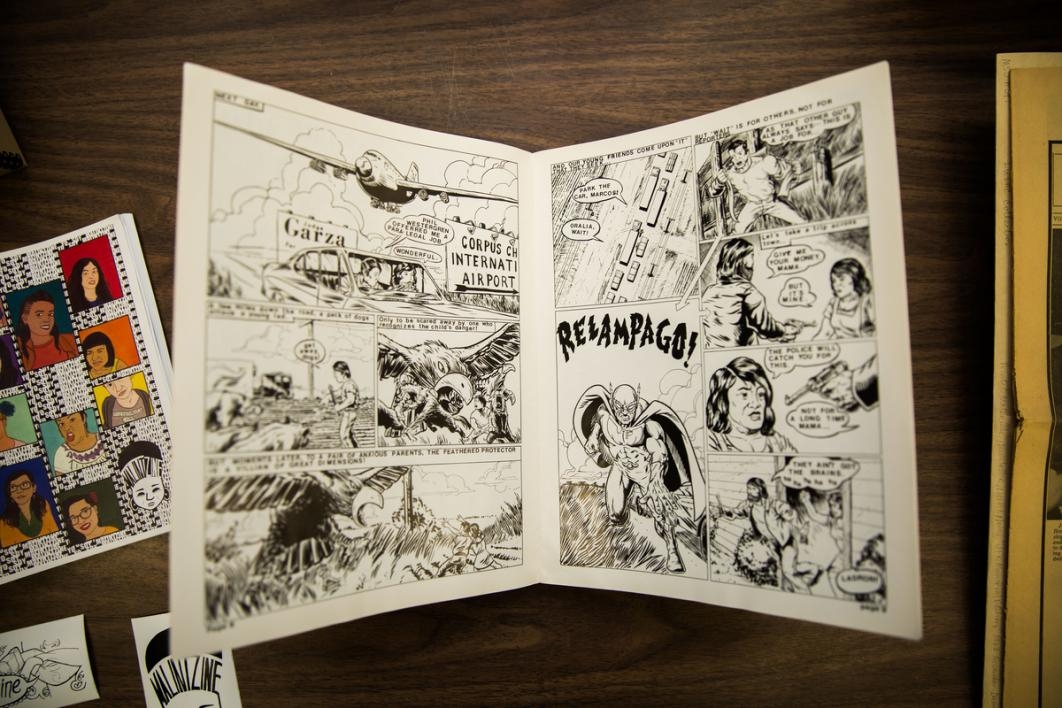 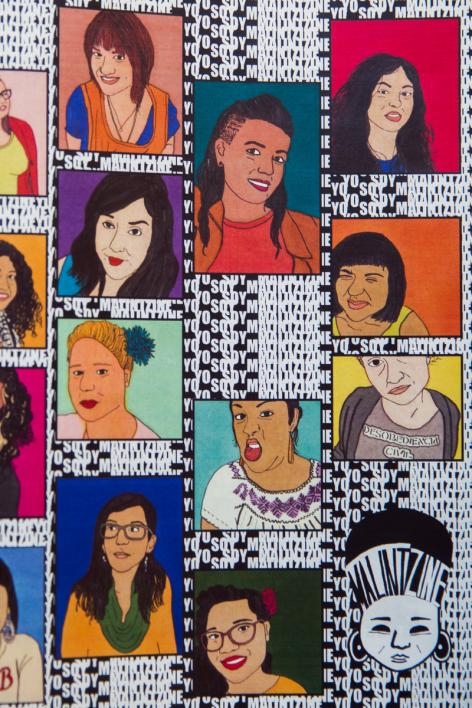 MalintZINE is a “community of radical mujeres, some of color and some queer, based in Tucson, Arizona." They are determined to document the experiences, narratives and knowledge of those who dwell in society’s margins.

Most recently, Godoy hosted a Latino Genealogy and Preservation of Family Archives workshop Oct. 8 for Hispanic Heritage Month, where she taught attendees how to trace their roots and preserve their family’s history.

The collection is also in the process of engaging the community by updating and making its online exhibits more accessible. 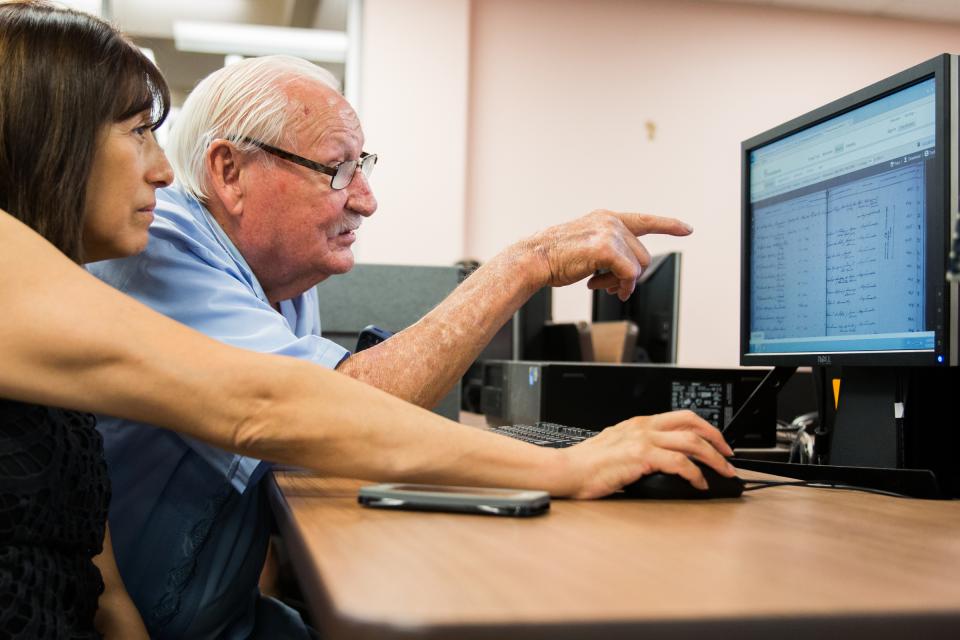 At an Oct. 8 Latino genealogy workshop hosted by Godoy, Betty Fry and her father, Eddie Gardner, look for records on their family, whose history in Arizona goes back eight generations. Attendees learned how to become their own archivists and how to preserve their family materials. Photo by: Deanna Dent/ASU Now

To view the Chicano Research Collection, make an appointment with Godoy by contacting her at nancy.godoy@asu.edu or 480-965-2594.

Free electron lasers — powerful devices that can peer deep into molecular structure and the ultrafast timescales of chemistry — cost billions to build and are miles long, but an Arizona State University professor is constructing a version that can fit on a tabletop. And it will cost a fraction of the price of its larger peers.This compact free electron laser will be accessible to millions of s... 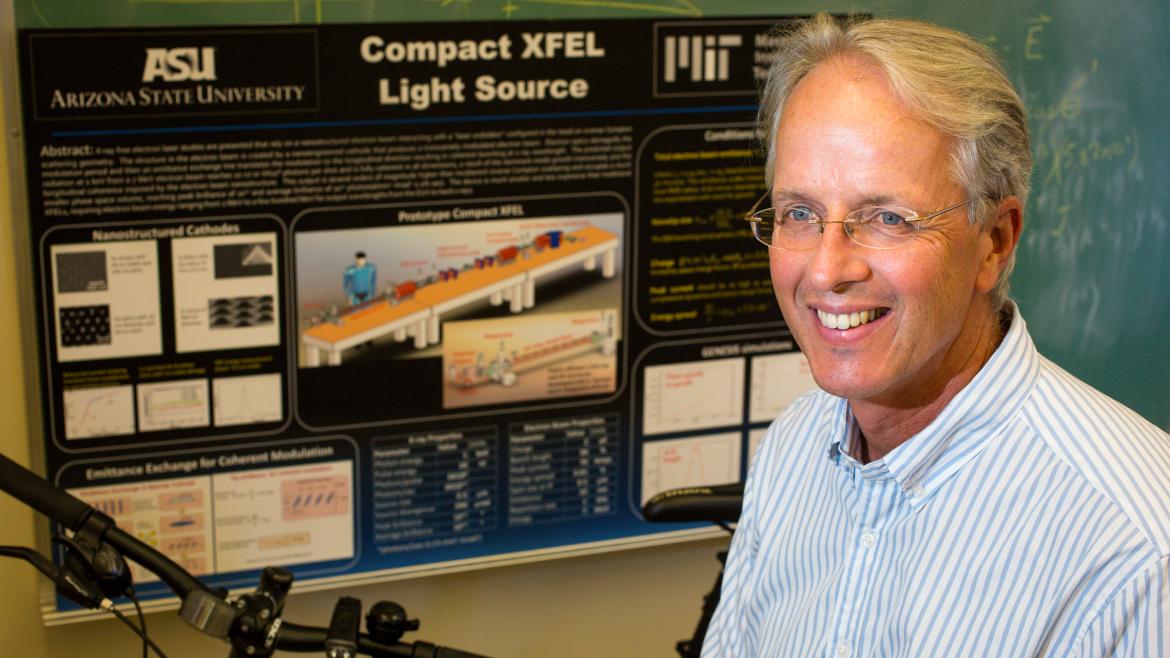 Free electron lasers — powerful devices that can peer deep into molecular structure and the ultrafast timescales of chemistry — cost billions to build and are miles long, but an Arizona State University professor is constructing a version that can fit on a tabletop. And it will cost a fraction of the price of its larger peers.

This compact free electron laser will be accessible to millions of scientists, instead of hundreds, advancing countless fields of research and potentially expanding medical uses.

“There’s almost no limit to what it can do,” said William Graves, associate professor in the university’s Physics Department and Biodesign Institute. “These things are brand new; they’ve never existed before. We think it’s really going to revolutionize X-ray science.”

Free electron lasers, which use a high-power laser to make X-rays with electrons, have been around for five years, but only a few exist. They cost $1 billion to build, they can be miles long, and they cost $100 million annually to operate. Access to them is highly sought after by scientists, with 80 percent of applications rejected.

Graves’ compact version will be about 3 feet long, cost about $10 million to build, operate on a $1 million annual budget, and require three people to run it.

An accelerator physicist and a veteran of MIT and Brookhaven National Lab, Graves has worked on the big particle accelerators, which make X-ray light sources, but in the past 10 years has been working on small free electron lasers.

Graves came to ASU from the Massachusetts Institute of Technology to work on this new generation of imaging technology because, “ASU is giving me the chance to build it.”

Graves came to ASU from the Massachusetts Institute of Technology because “Petra Fromme and John Spence at ASU demonstrated they have the vision and resources to make this project successful,” Graves said. Fromme directs the Biodesign Institute’s Center for Applied Structural Discovery and is a professor in ASU's Department of Chemistry and Biochemistry. Spence is a Regents' Professor and the Richard Snell Professor of Physics at ASU.

“ASU has stepped up to the plate and funded the first version of it,” Graves said. “We’re building it as a collaboration. We’ll initially run it at MIT, but as soon as our laboratory space is ready here, we’ll bring it here and run it here.”

The laser is being assembled at MIT under ASU direction and will be operated there until the new third Biodesign building is complete at ASU.

Graves sees the compact version being a crucial new tool in medicine because it could be used to notice differences in soft tissue, such as seeing a tumor within a breast.

“It can see things that are just plain invisible to conventional X-rays,” he said. “We’d like to commercialize it. We think there’s a lot of potential. Not every hospital, but every medical center would want one.”

“There’s almost no limit to what it can do."

The machine will be capable of looking at the molecular structure of any living system.

“With an X-ray laser, the pulses are so short you can strobe the chemical reaction and make a movie of how molecules move and bind and break their bonds with each other,” Graves said.

“The goal is to make these movies with the X-ray laser.”

It’s more than just science and medicine that could benefit from Graves’ ambitious design.

He recently visited the conservation and research labs at the Louvre in Paris, where art treasures could be analyzed using his compact free electron laser X-ray onsite. This would allow experts to determine authenticity or whether a painting was created on top of another painting.

“We think we can really change X-ray science,” he said.