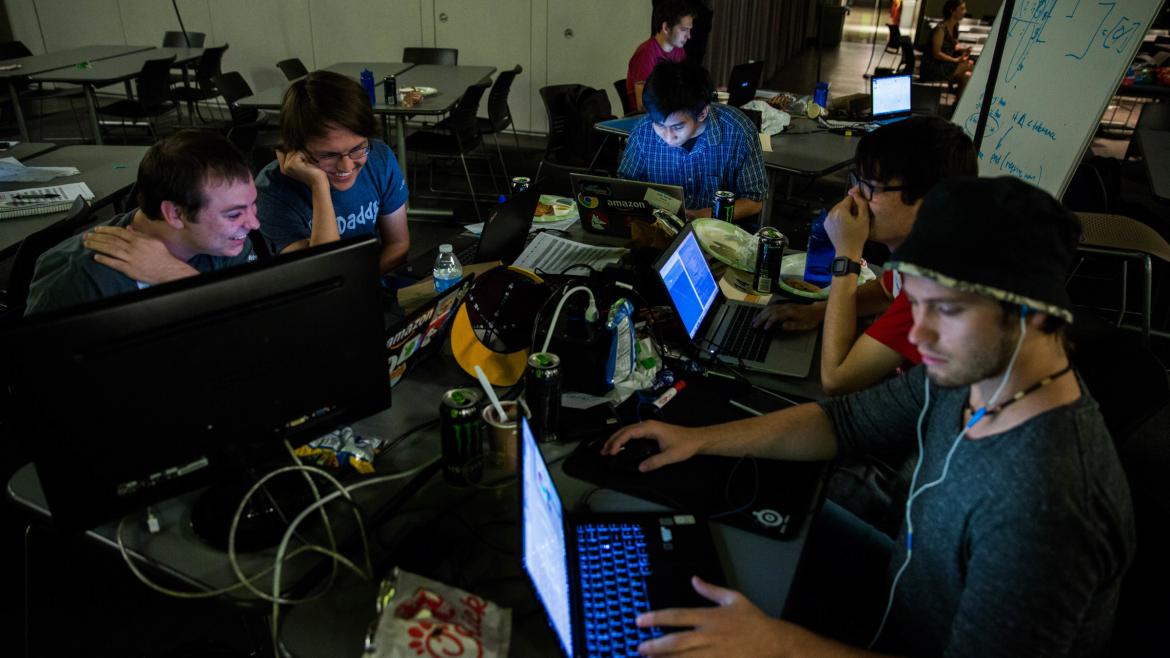 Hacking technology for the social good

It’s only a few hours into the second annual Hacks 4 Humanity hackathon on Saturday, Oct. 3, and already cases of energy drinks are being wheeled into Stauffer Hall on Arizona State University’s Tempe campus.

They’ll come in handy as participants, gathered around tables and huddled over laptops, will have worked for 36 hours straight by the time the ASU Project Humanities-sponsored event comes to a close Sunday evening.

The so-called “hackathon for the social good” asks participants to create technology solutions and initiatives that address the needs of humanity, with the seven principles of Project Humanities’ “Humanity 101” movement in mind: compassion, empathy, forgiveness, integrity, kindness, respect and self-reflection.

The people who have chosen to dedicate their weekend to this cause are techies, programmers, developers, humanists, artists, students, educators and creative visionaries of all ages and walks of life.

“I’m amazed how people come together for this. They’re so committed,” said Neal Lester, ASU professor of English and creator and director of Project Humanities, an award-winning university initiative that “seeks to connect the university and local communities in talking, listening and connecting ... to create positive change in people and communities across political, socioeconomic, geographic and cultural boundaries, and in our daily lives.”

“Technology has become the language we speak, and social media has become our way to be in touch with the world — so we might as well use it for the greater good." — Sharon Torres, Project Humanities coordinator

“Some might argue that the younger generation’s attachment to social media has created an insularity that disconnects them on a human level. The truth is … technology does not have to surpass our humanity. Technology can be used to enable us to connect on a very human level, and the innovative ideas we anticipate to come out of this year’s Hacks for Humanity will prove that,” she said.

This year, those ideas ranged from apps that assist in calming car-crash victims to finding kidney donors to helping pedestrians better navigate cities.

Participant Kate Pond explained her group’s idea of a website designed to help people reach personal goals. An intern with a local media company, Pond decided to participate in the hackathon as a way to be more involved in her community and to stoke her own creativity.

“It’s nice to give back,” she said. “And I think it’s always fun to meet new people and just get your creative juices flowing.” 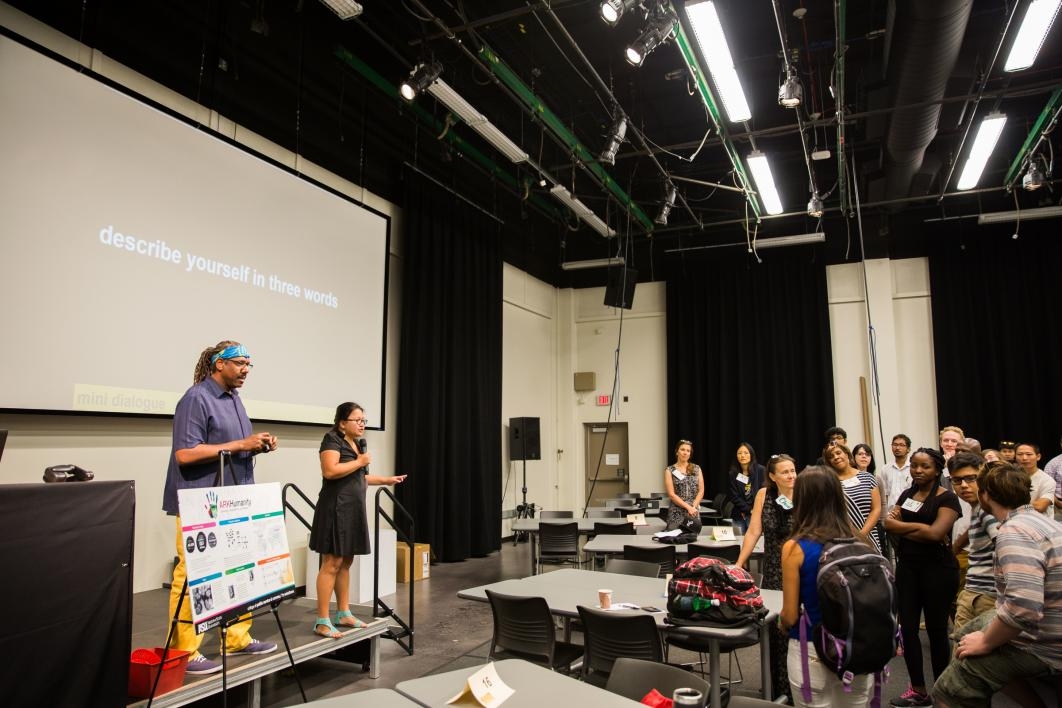 Neal Lester, ASU professor of English and director of Project Humanities, and Project Humanities coordinator Sharon Torres address students at the start of Hacks 4 Humanity on Oct. 3 in the Stauffer Building on ASU’s Tempe campus. 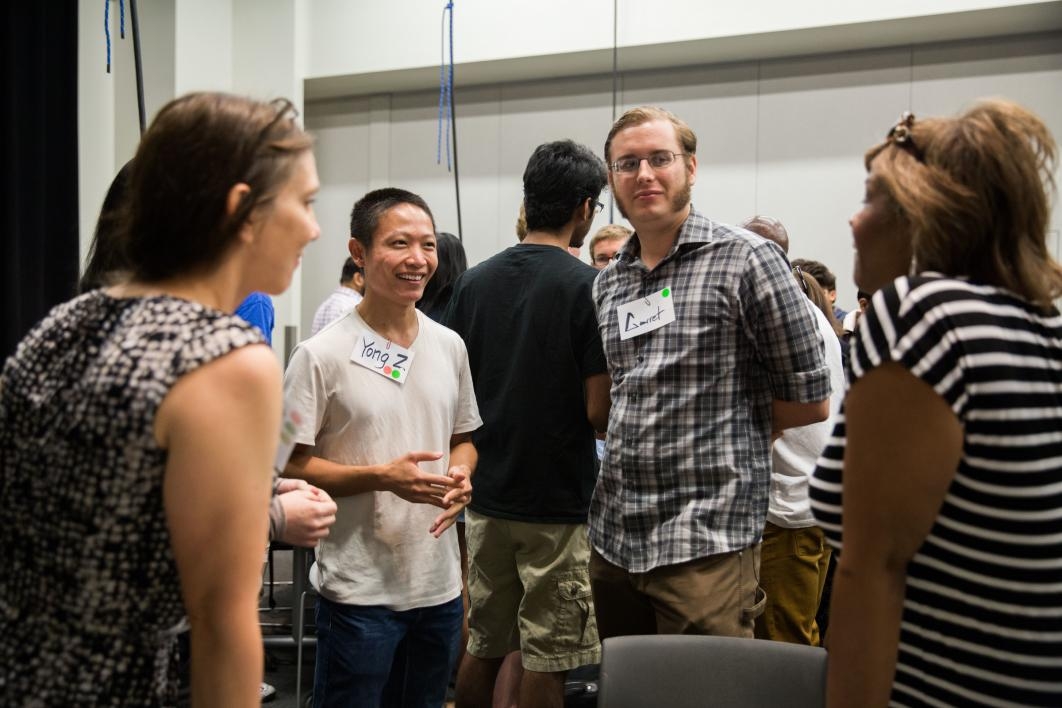 Yong Zou (left) and Garret Walliman chat with other participants before deciding to become a group together at Hacks 4 Humanity. 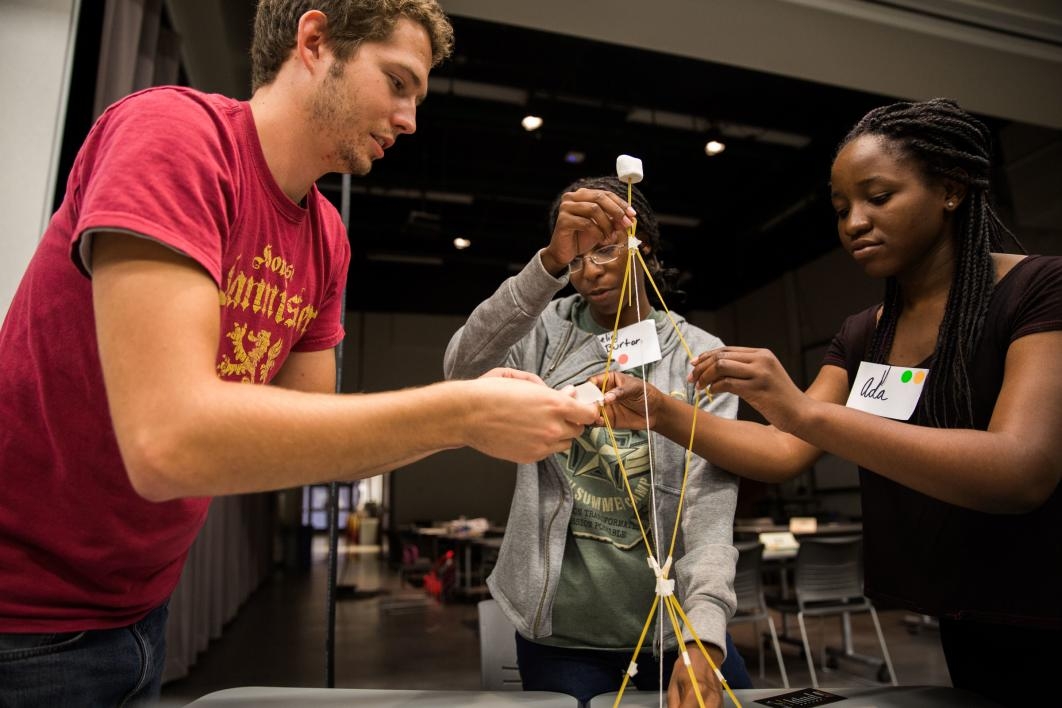 The “CoMOODicators” group attempts to build a marshmallow tower using string as a tension lever to pull the marshmallow down during Hacks 4 Humanity. The marshmallow must rest on a tower that is freestanding and built only with string, tape and spaghetti. It is a popular team-building exercise conducted by groups around the country to learn how to build, work and troubleshoot as a group. 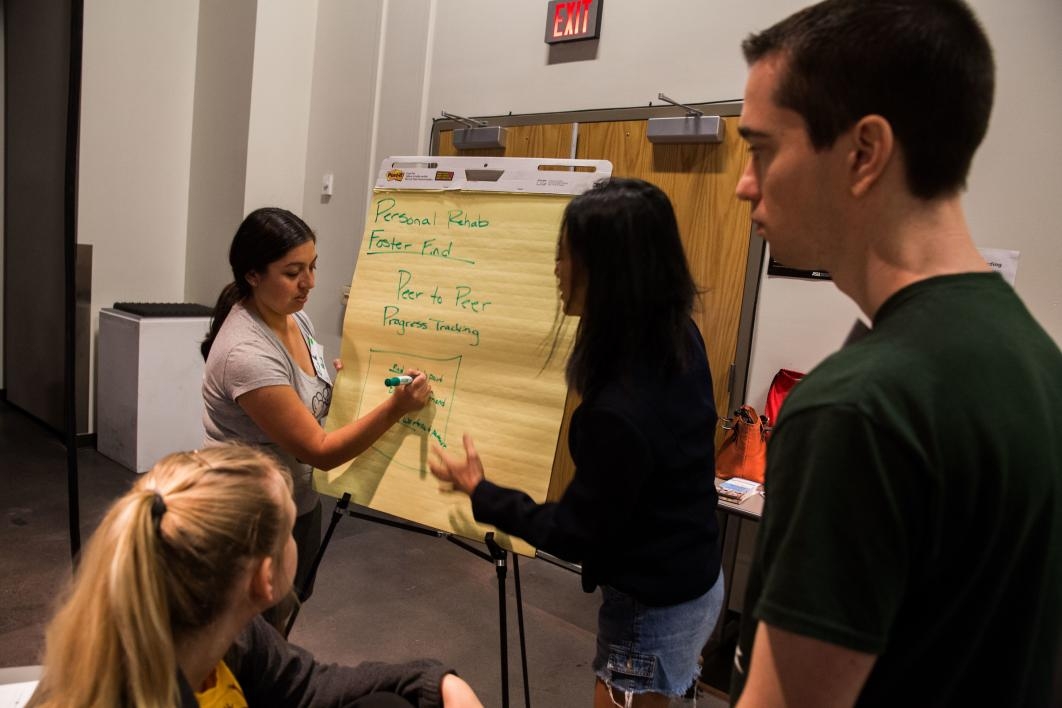 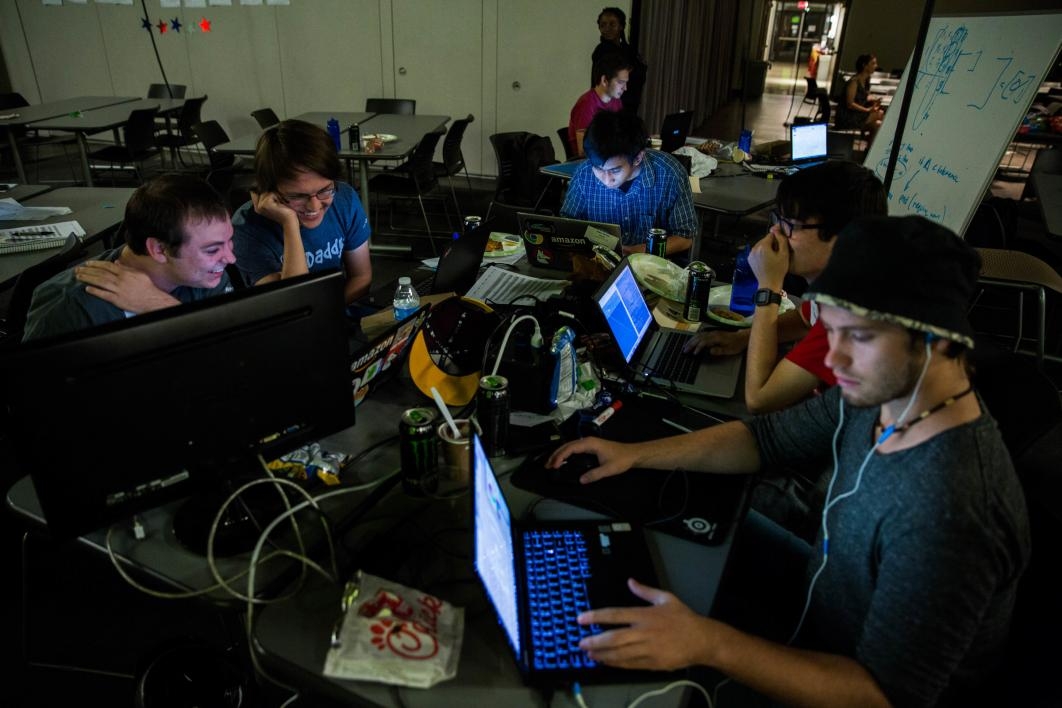 Students from team "Ayy LMAO" work into the night during the hackathon on Oct 3. The team ended up winning third place for its guard-dog app. 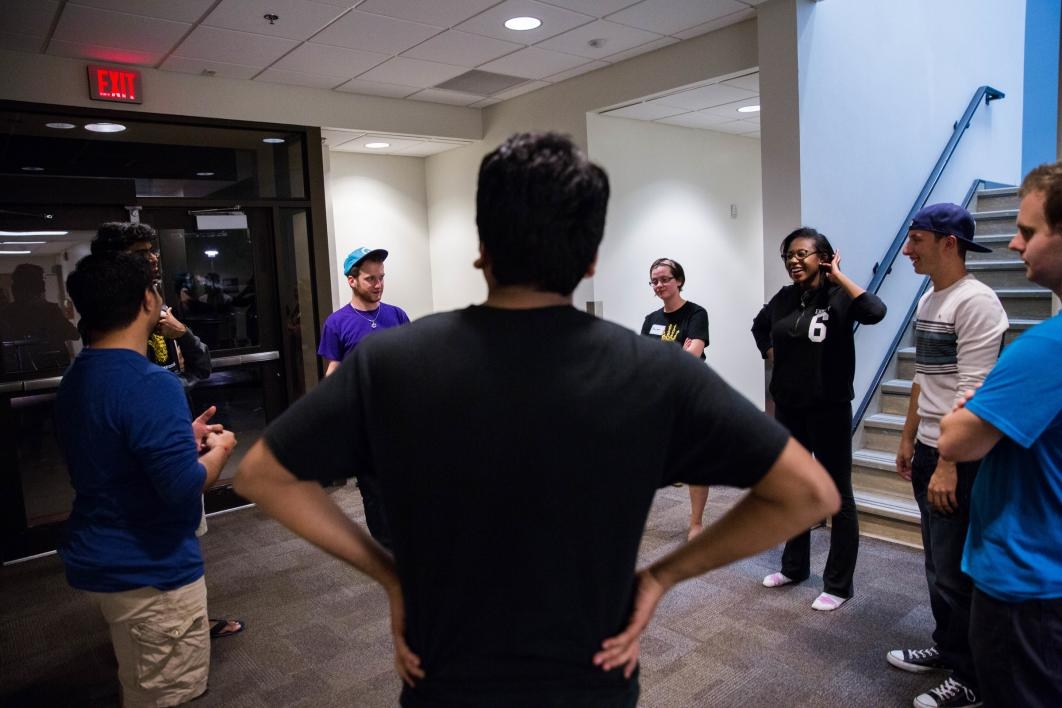 “ComMOODdicans” group's Caleb Smith and Ada Ashong look over their work at midnight during the hackathon. Both are freshmen majoring in computer science. 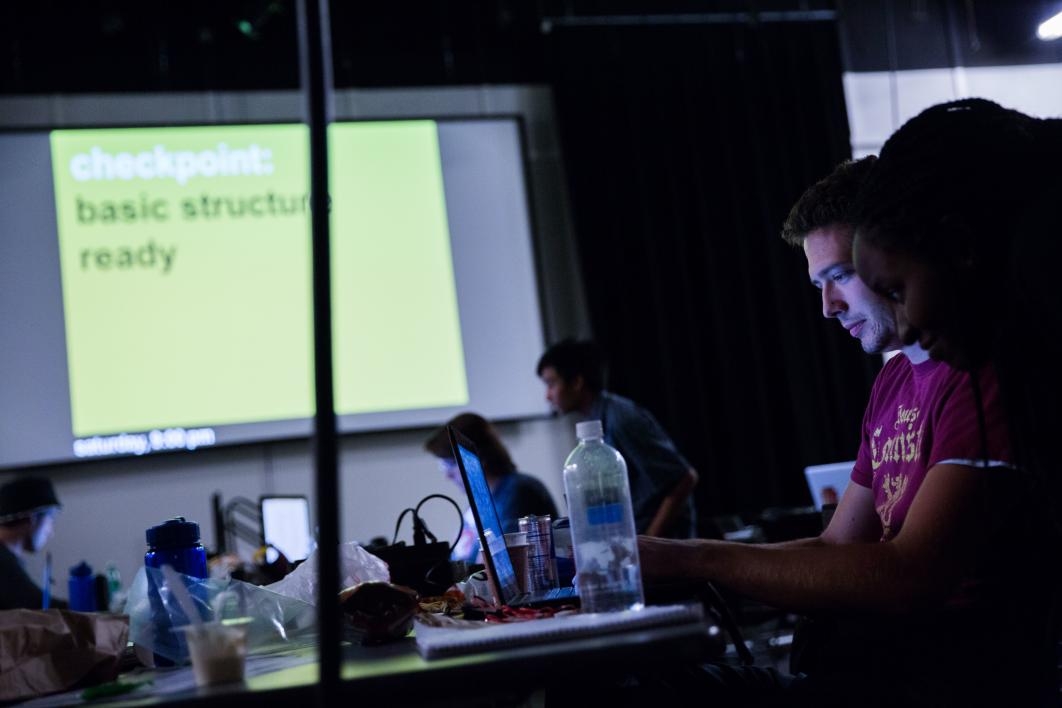 Participants in the Hacks 4 Humanity event play an improv game as a team-building exercise during “power hour” at midnight in the Stauffer Building on ASU’s Tempe campus Oct. 3. 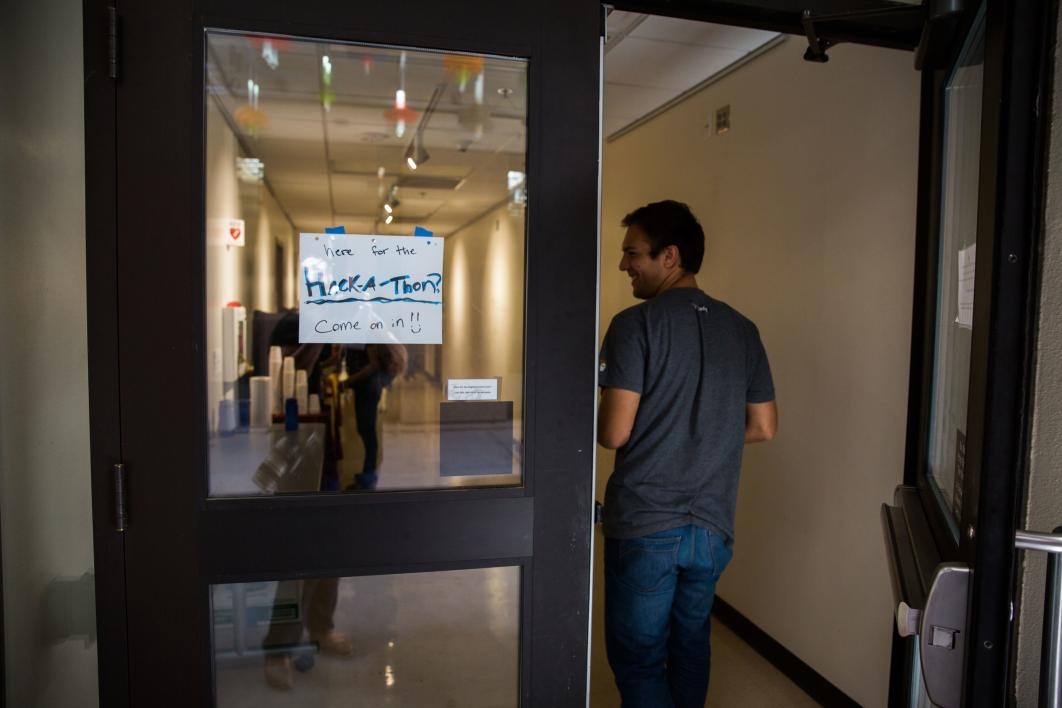 Students return to the building to wrap up their app development near the end of the Hacks 4 Humanity event on Oct. 4. 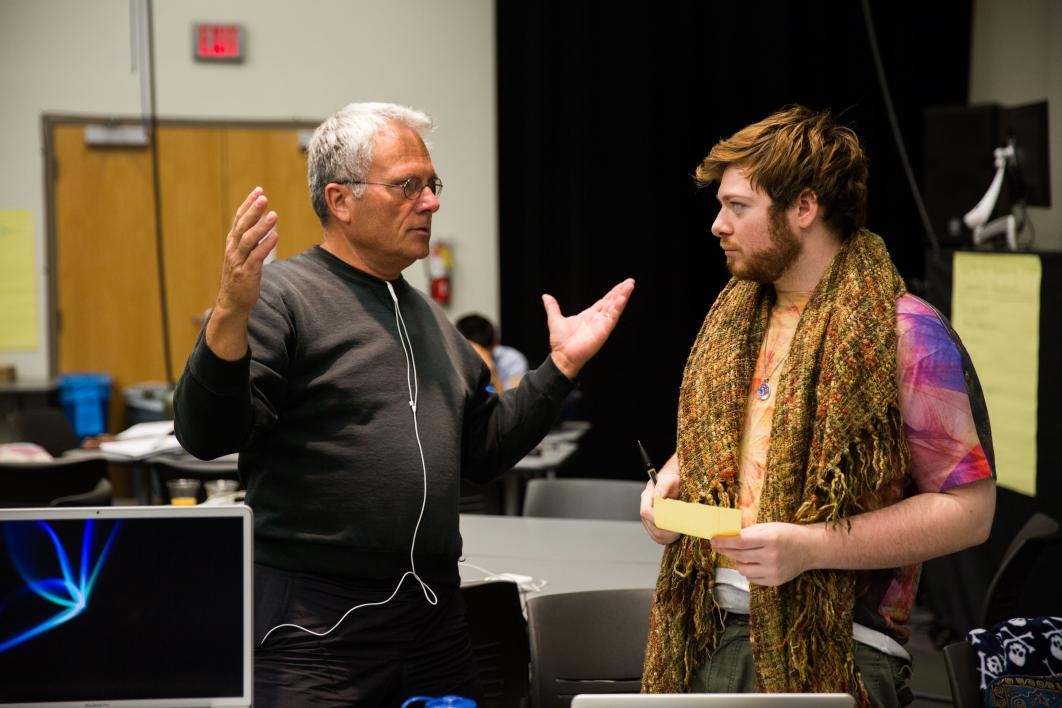 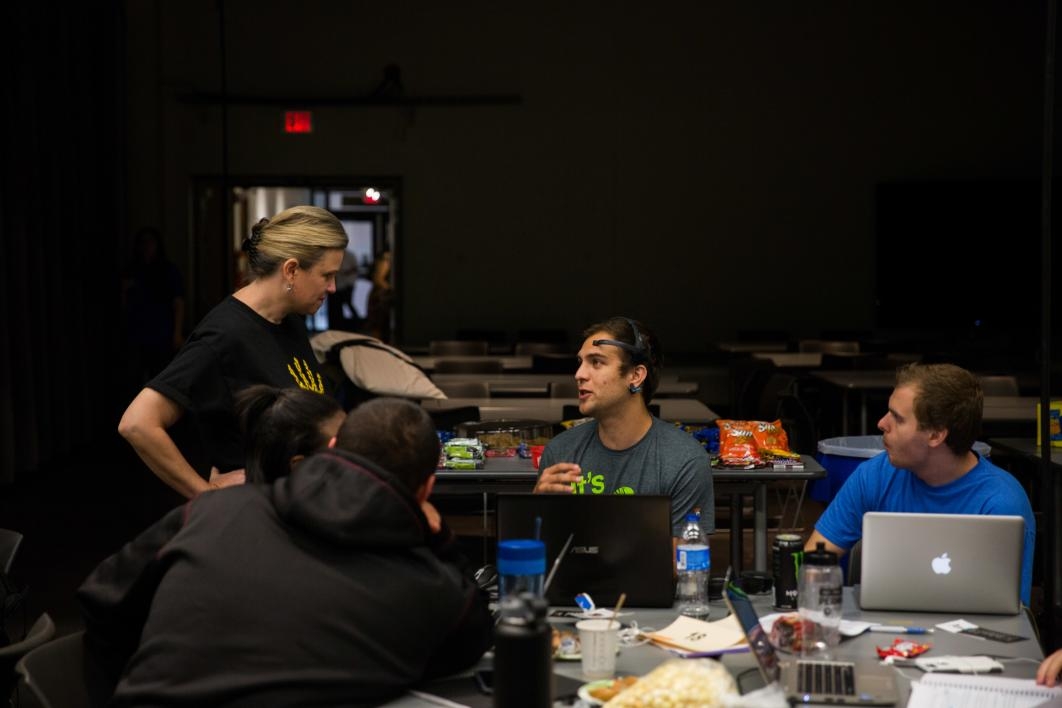 The group “Hack 21” works on the final touches of an app at the conclusion of Hacks 4 Humanity on Oct. 4.

Roaming from team to team were members of last year’s Hacks 4 Humanity winning team, ARKHumanity, who were there to serve as mentors.

ARKHumanity created software that mines Twitter feeds for keywords that suggest suicidal thoughts. Humans then assess whether the tweet should be acted upon and, if so, they will have a series of interventions available to make connections to the individual, start conversations or share valuable information about services that could support them.

ARKHumanity team member and University of Phoenix faculty Kacie McCollum said she wanted to return as a mentor this year “to continue to do the work that we did and inspire others, especially getting the community involved in working with students … When you’re working with groups from all ages and all walks of life, you get something incredible and that’s exactly why I chose to mentor, because it was life-changing for me.”

After two grueling days of brainstorming, coding and occasionally sleeping, team “Cope Better” was announced as the winner of this year’s Hacks 4 Humanity hackathon, for the ADHD-coping app, “Violette.”

“Violet is the color of compassion and the reason behind the decision [for the name],” said team member Yashwanth Nanda Kumar, a recent ASU grad and the co-founder and CEO of Sential, a medical device start-up.

The prize for team “Cope Better” was a package that included further mentorship from Project Humanities, an invitation from the Office of Entrepreneurship and Innovation to a boot camp in December and an iPad Air 2.

“It definitely feels really awesome to win the hackathon. We believed totally in our product, as it was designed after extensive brainstorming, talking to experts, talking to people who had known people with ADHD, mentors and friends who gave valuable feedback along the way,” said Kumar. “Also, the experience of being in that space, meeting strangers who became friends and getting opportunities to actually put the principles in action by helping out others and receiving help from my fellow teams, it was amazing.”

Other members of the team were Bauer Doski, a senior in psychology at ASU; Rutvik Joshi and Krishnakant Mishra, both ASU grad students in computer science; and local community member and engineer Kelly Macshane.

“Violette” is an interactive behavioral therapy app that provides an interface between individuals diagnosed with ADHD and their parents. It features puzzles and games that help them to focus their attention when they are experiencing symptoms of the disorder.

Kumar said they wanted to create “a product which can potentially change the scenario of kids with ADHD and reunite families though an interactive process.”

Plans are already in motion to take the app from its current version to a beta version, and the team has received offers from fellow hackathon participants to assist in that endeavor.

“We will definitely consider other competitions at ASU to raise seed money and opportunities to establish a company and grow it further,” said Kumar.

In second place this year was “Loop Learn,” another learning-disability app, and in third was “Ayy LMAO,” a guard-dog app that detects physical trauma (such as a fall) via sensors in a phone and alerts emergency personnel.

Black-market collectors willing to pay hundreds of thousands of dollars for rare cactuses are putting more than 30 percent of the species at risk for extinction, according to a paper released Monday.The first global assessment of the problem, completed by the International Union for Conservation of Nature, revealed that cactuses are the fifth-most-threatened group of species — topping mammals an...

Black-market collectors willing to pay hundreds of thousands of dollars for rare cactuses are putting more than 30 percent of the species at risk for extinction, according to a paper released Monday.

The first global assessment of the problem, completed by the International Union for Conservation of Nature, revealed that cactuses are the fifth-most-threatened group of species — topping mammals and birds. 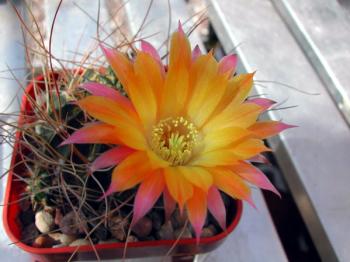 A small cactus with long thorns and brilliant flowers, the Echinopsis pampana, a native of Peru, has been stolen for the ornamental plant trade so much that at least half of the population has disappeared in the past 15 years. Photo by: Pete Cupial-Jones via Wikimedia Commons Download Full Image

Arizona State University conservation biologist and wildlife ecologist Jan Schipper contributed to the study. Deep-pocketed collectors hungry for the rarest of the rare are driving the trend, Schipper said.

“It’s not the quantity,” he said. “It’s like orchid collectors. They’re going after the rare stuff. They want the stuff no one else has. … Germany does a lot of this type of collecting. I’m not singling out a particular culture, but they do. People will fly to Mexico and go to some of these localities where cactus have been harvested in the past.”

The depletion is similar to what is seen in the theft, looting and trafficking of antiquities and archaeological treasures.

“Any time collectors after rarities are involved, you’re going to get that,” said Schipper, a conservation research postdoctoral fellow in a partnership between the ASU School of Life Sciences and the Phoenix Zoo-Arizona Center for Nature Conservation. “They pay hundreds of thousands of dollars, easily.”

Some species of cactus have tiny populations, as small as a single group on a hillside in remote areas, he said.

“Scientists have been studying populations for 10 years, and they go back and they’re all gone,” he said.

“They confirm that the scale of the illegal wildlife trade — including trade in plants — is much greater than we had previously thought, and that wildlife trafficking concerns many more species than the charismatic rhinos and elephants which tend to receive global attention,” he said. “We must urgently step up international efforts to tackle the illegal wildlife trade and strengthen the implementation of the CITES Convention on International Trade in Endangered if we want to prevent the further decline of these species.”

The Convention on International Trade in Endangered Species of Wild Fauna and Flora (CITES) is an international agreement between governments aiming to ensure that international trade in specimens of wild animals and plants does not threaten their survival.

Eighty-six percent of threatened cactuses used in horticulture are taken from wild populations, the report said.

“European and Asian collectors are the biggest contributors to the illegal cactus trade,” the report read. “Specimens taken from the wild are particularly sought after due to their rarity.”

The results of the global health check came as a shock to Barbara Goettsch, lead author of the study and co-chair of IUCN’s Cactus and Succulent Plant Specialist Group.

“We did not expect cacti to be so highly threatened and for illegal trade to be such an important driver of their decline,” Goettsch said. “Their loss could have far-reaching consequences for the diversity and ecology of arid lands and for local communities dependent on wild-harvested fruit and stems.”

A small cactus with long thorns and brilliant red flowers, the Echinopsis pampana, native of the puna desert of Peru, has been stolen for the ornamental plant trade so much that at least half of the population has disappeared in the past 15 years. Places it could once be found in have now been covered by housing. The species is listed as endangered.

“I definitely didn’t expect cactus to come higher than mammals and birds in terms of threat, but it did,” Schipper said. “That kind of stuff can be controlled, it just needs legislative and legal framework and some law enforcement to back that up. … Most countries, especially in some of these areas, don’t have that capacity.”

“Recognition of the problem is the first step,” he added.

The study was released Monday in the journal Nature Plants.