In the Phoenix metropolitan area, temperatures can top 120 degrees Fahrenheit. Ensuring a reliable power grid — and air conditioning — for its more than 4 million people could quickly become a life-or-death situation. As we move into the future, if population and temperature extremes continue to increase as they’re expected to, so will pressures on Phoenix’s power grid.

New technologies, such as electric cars and rooftop solar panels, as well as citizens’ access to them, are also influencing the flow of energy in and out of grids. 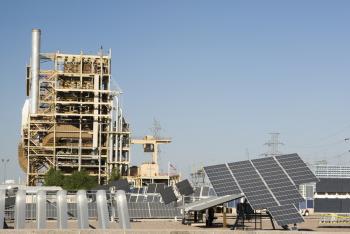 New technologies, like these solar panels at a solar research center in Phoenix are influencing flows of energy in and out of the power grid. Photo by: Jim Parkin/Shutterstock.com Download Full Image

While innovations are helping to create “smarter” grids that enable utilities to better monitor, manage and adapt to these changing energy flows, innovations also introduce new issues related to citizens’ rights and responsibilities when it comes to consuming and producing power.

“You’ve got a number of social and technical issues floating around, some of which matter to some actors more than others,” said Erik Fisher, associate professor in the School for the Future of Innovation in Society. “Utilities, government planning offices, private companies and academic and national research labs — they’re all thinking about and trying to be responsive to these things, but they’re not necessarily reflecting on them in a coherent, systematic or comprehensive manner.”

To help better understand how to illuminate and cope with this complexity, the National Science Foundation (NSF) has awarded more than $300,000 to social scientists with the Center for Nanotechnology in Society at ASU and the Institute for Sustainable Solutions at Portland State University to collaborate with those working at all stages of “smart” grid design, development, and deployment.

“We want to help all of these different professionals, experts and specialists to have a more systems-thinking approach to what their immediate goals are, what they’re trying to accomplish collectively and how these things might play out in the future,” said Fisher, who is principal investigator for the project. “We also want them to be able to increase their awareness of other stakeholders that are operating along side of them at the same time.”

This project is a follow-up to the successful Socio-Technical Integration Research (STIR) project, also funded by the  NSF, in which social scientists and humanists were embedded in 30 laboratories around the world to help determine how laboratories might comply with increasing pressure to consider social responsibility with their research. STIR researchers observed laboratory operations and then facilitated semi-structured collaboration and reflection sessions with the laboratory workers over a 12-week period. Lab researchers considered such things as their technical decisions, procedures and the potential long-term societal impacts of their work.

Though many laboratory researchers were worried that the interactions might slow down their research, the integration actually often turned out to have positive results on laboratory efficiency and creativity.

In a laboratory working on solar cell efficiency, for example, collaboration and reflection led to new ideas and ultimately to several breakthroughs in research. In another laboratory, the reflections led researchers to swap out some of the materials they were using for more environmentally benign alternatives. Many of the researchers felt the reflection made it easier for them to shift directions.

“Not only was the integration useful for science, but in some cases it also helped move science in a direction valuable to society,” Fisher said.

The current project — STIR Cities — wants to see how well such socio-technical integration works outside of the lab.

“We wanted to bring STIR into cities where technology hits the ground and really interfaces with society,” said Thaddeus Miller, a co-principal investigator of the STIR Cities project and assistant professor of urban studies and planning at Portland State University. Miller is also an alumnus of ASU’s School of Sustainability and the Consortium for Science, Policy, and Outcomes, where he’s still an affiliate.

“We want to find out if the discussions and reflections with public utilities, city bureaus and national labs fostered by the STIR approach might shape how energy systems are developed,” Miller said.

The project will be implemented in Portland, Oregon, as well as Phoenix, to study how the two cities historically imagined the role of the grid, as well as how current regional values are influencing decisions related to it.

“The common conception is that technology develops the same everywhere. An energy plant here is an energy plant there,” Miller said. “But technological design is highly contingent on where it happens.”

Depending on how much a region values such things as open space, walkability of streets, public transportation, or sustainability, will influence how its infrastructures are designed and developed over time.

Imaginations of the future, the good life, and what it means for technology to be smart not only differ between cities, but also between those designing and implementing the grid and those using it, adding further to the challenges of designing the grid in a way that best benefits society as a whole.

“Increased availability of rooftop solar panels to citizens, for example, has raised questions about whether citizens should have the right to produce and sell their own power, and if so, how can that be done while maintaining the reliability of the grid,” said Jennifer Richter, assistant professor in the School for the Future of Innovation in Society and the School of Social Transformation at ASU and another co-principal investigator of the STIR Cities project. “It also raises concerns about what responsibility can and should be shouldered by citizens when it comes to both contributing energy and reducing their use of it, and about fairness when not all families can afford technology necessary to produce their own power. It’s about more than just producing electrons.”

“Suddenly energy is becoming a very interesting realm of public engagement in a way that it hasn’t before, and it’s creating a lot of different pushes and pulls on the system,” Richter said.

While the STIR Cities researchers don’t purport to know what the effects of their integration exercises will be, they do hope to make it easier for everyone involved with the electricity infrastructure to consider the system more holistically and anticipate the societal impact of technological decisions being made today.

“I see us as translators, not just from designers to the public, but from the public to designers as well,” Richter said.

Fisher, too, hopes the project will ultimately break down barriers between groups.

“We’re not going to try to tell anyone the right way to do things,” Fisher said, “but we do hope to make it easier to integrate humanities and social sciences into grid innovation to help create more intelligent, socially robust power systems for our modern world.”

As a top-ranked school for producing Peace Corps volunteers, Arizona State University and the Peace Corps are expanding opportunities for returning volunteers who want to continue their education at the graduate level.The Coverdell Fellows Program (formerly known as Fellows/USA) provides financial support for obtaining a master’s degree at ASU. More than 15 master’s programs at ASU offer a Cov...

As a top-ranked school for producing Peace Corps volunteers, Arizona State University and the Peace Corps are expanding opportunities for returning volunteers who want to continue their education at the graduate level. 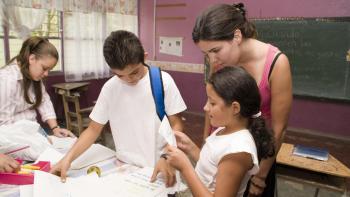 Arizona State University leads all Arizona colleges and universities in producing the most Peace Corps volunteers. Nationally ASU ranks among the top 20 large undergraduate schools and in the graduate school top 10. The university also ranks among the top 40 volunteer-producing colleges and universities of all time. Photo by: Peace Corps Download Full Image

This is the first time the fellowship has been offered at ASU. Applications for the summer and fall 2016 semester will be accepted beginning Dec. 1, with a suggested submission by Feb.1, and final deadline of March 1, 2016.

Kenneth Alexander, who served as a small business development volunteer in Peru, helped tutor K-12 students as part of his Coverdell community service at Duke University. He helped low-income students achieve in school, prepare for college and break the cycle of poverty in their families.

“My community service allowed me to expand beyond my comfort zone, and open my network to a group of people with very different backgrounds,” Alexander said. “This really allowed an interesting perspective in terms of issues you find at home versus the developing world. Although socio-economic standards may be different, a lot of the issues and difficulties are still the same.”

Alexander earned a master’s in economic development policy, and is currently at Pricewaterhouse Coopers LLP, working in capital projects and infrastructure development. The fellowship encouraged him to seek further ways to aid community development. He served on the Community Development Advisory Committee in Montgomery County in Maryland, and now is on the San Miguel School Board of Trustees for low-income youth in Washington D.C.

“In my day-to-day role I meet new people and encounter new challenges, something I am able to easily navigate driven by my Peace Corps experience, grad school and the Coverdell Fellowship,” Alexander said.

For application and requirements, visit the ASU Coverdell site. For more information about the Peace Corps, visit peacecorps.gov, and the Peace Corps’ Facebook and Twitter pages.