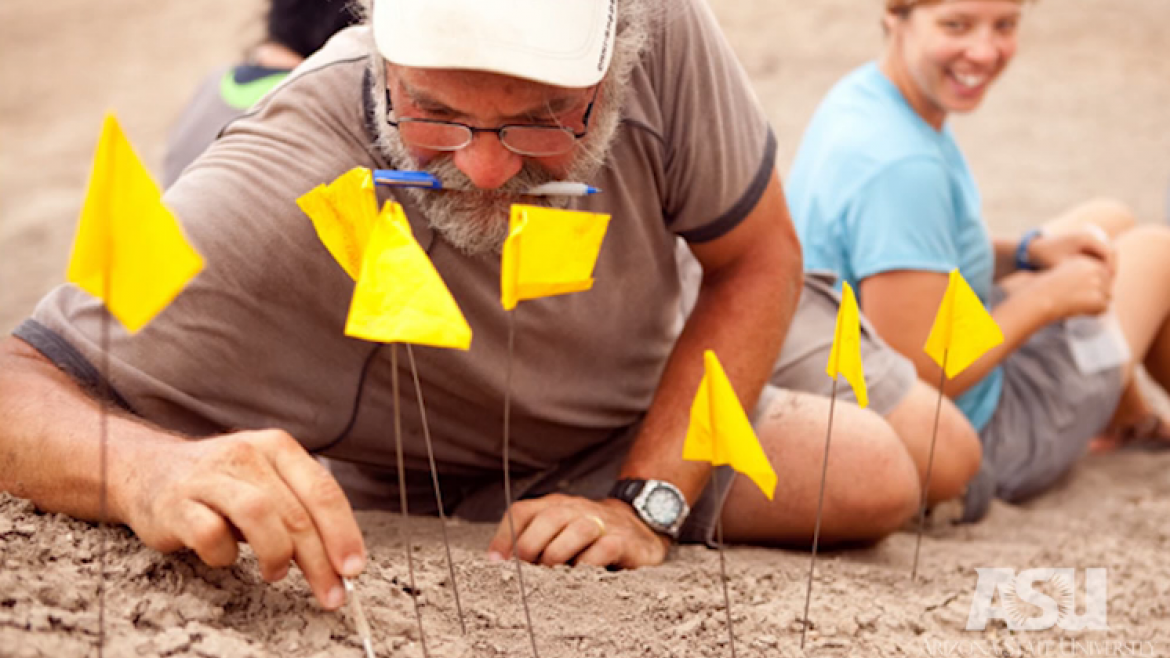 The earliest evidence of our human genus — Homo — was found in Ethiopia by a team of Arizona State University scientists and students during field research in 2013.

The fossil, the left side of a lower jaw with five teeth, has been dated to 2.8 million years ago, which predates the previously known fossils of the Homo lineage by approximately 400,000 years.

The discovery is being published for the first time in the March 4 online version of the journal Science.

For decades, scientists who study the origins of modern-day humans have been searching for fossils documenting the earliest phases of the Homo lineage.

Researchers have found fossils that are 3 million years old and older. The most famous example of those human ancestors is the skeleton of Lucy, found in northeastern Africa in 1974 by ASU researcher Donald Johanson. Lucy and her relatives, though they walked on two feet, were smaller-brained and more apelike than later members of the human family tree.

Scientists have also found fossils that are 2.3 million years old and younger. These ancestors are in the genus Homo and are closer to modern day humans.

But very little had been found in between — that 700,000-year gap had turned up few fossils with which to determine the evolution from Lucy to the genus Homo. Because of that gap, there has been little agreement on the time of origin of the Homo lineage.

With this find, that mysterious time period has gotten a little clearer.

“The importance of the specimen is that it adds a data point to a period of time in our ancestry in which we have very little information,” said William H. Kimbel, director of ASU’s Institute of Human Origins. “This is a little piece of the puzzle that opens the door to new types of questions and field investigations that we can go after to try to find additional evidence to fill in this poorly known time period.”

The international research team that found the jaw fossil is co-led by ASU President’s Professor Kaye Reed and assistant professor Chris Campisano, both of the Institute of Human Origins and School of Human Evolution and Social Change. The team includes Ramón Arrowsmith of ASU’s School of Earth and Space Exploration.

The find took years of searching.

“We started this project, actually in 2002,” said Reed. “We started surveying – not picking up anything, which is really hard when you see good fossils – but we surveyed this area. ... So it took us basically 13 years to find this [human ancestor]. It doesn’t mean that the work that we did was wasted up until that time. But when we did find this [jaw], we were pretty excited that after all this time it actually worked out.”

When the team did eventually start picking up fossils, they expected to find Lucy’s friends and relatives.

“We first started collecting fossils in the area around where the jaw was eventually found in 2012,” said Campisano. “When we realized how old the sediments were, we thought we might be able to find more specimens of Lucy’s species and figure out what happened to that lineage. Instead, we were rewarded with a much more exciting discovery.”

So what was this human ancestor, which lived 2.8 million years ago, like?

There are some things scientists can tell. According to Reed, it walked on two legs and lived in a dry, arid climate in eastern Africa. Research is still being conducted to determine what it ate and whether it used stone tools – something the team will be looking for on future trips to the region.

The fossil was found by Chalachew Seyoum, an ASU graduate student from Ethiopia.

“Honestly, it was an exciting moment,” said Seyoum. “I had good experience in field surveying and knew where potential sediments are. I climbed up a little plateau and found this specimen right on the edge of the hill.”

The fossil analysis, led by Kimbel and lead author and ASU graduate Brian Villmoare of the University of Nevada, Las Vegas, revealed advanced features such as slim molars, symmetrical premolars and an evenly proportioned jaw, which distinguish early species on the Homo lineage, such as Homo habilis at 2 million years ago, from the more apelike Lucy. But the primitive, sloping chin of this latest find links the jaw to a Lucy-like ancestor.

“It’s an excellent case of a transitional fossil in a critical time period in human evolution,” said Kimbel.

The Ledi-Geraru Research Project, which is where this new jaw was found, is based in the Institute of Human Origins (IHO) at Arizona State University, and recently wrapped up another field season to search for additional fossil materials.

Kimbel, who heads the IHO, said this find will help to answer important questions about how we became humans.

“One of the persistent questions that people have, and not just specialists, but everyone wonders about where did we come from? What are our ultimate origins?” Kimbel said. “And paleoanthropologists such as myself are dedicated to the mission of filling in the story of our origins through the finding of fossil evidence in remote places like Africa. That’s where we go every year to do our research and we are rewarded this time with a very important specimen that answers one aspect of this pressing question."

Arizonans largely continue to see illegal immigration as a major problem but believe undocumented immigrants should be treated humanely, according to a recent poll by ASU's Morrison Institute for Public Policy and the Walter Cronkite School of Journalism and Mass Communication.

Arizonans largely continue to see illegal immigration as a major problem but believe undocumented immigrants should be treated humanely, according to a poll by ASU’s Morrison Institute for Public Policy and the Walter Cronkite School of Journalism and Mass Communication.

Approaches to illegal immigration run the gamut – from strict deportation measures to a pathway to citizenship – but the nine out of 10 Arizonans agree (64 percent) or strongly agree (25 percent) that “undocumented immigrants are a problem, but Arizona needs to treat them humanely.”

For most questions, respondents were asked their level of agreement – strongly agree, agree, disagree or strongly disagree – regarding a series of statements.

Arizonans seem to be somewhat conflicted on issues surrounding undocumented immigrants, including when asked whether they agree or disagree with the following statement: “Undocumented immigrants bolster Arizona’s workforce and we should do whatever’s necessary to make it easier for them to come to Arizona.”

Overall, Arizonans are split on whether to pursue aggressive deportation. Fifty-two percent either agree (32 percent) or strongly agree (19 percent) with the following statement: “Arizona should aggressively pursue the deportation of undocumented immigrants.”

Two-thirds of Republicans (67 percent) either agree or strongly agree with the statement encouraging aggressive deportation of undocumented immigrants, compared with 35 percent of Democrats and 53 percent of Independents. Yet, there is no significant difference in responses to this statement from whites (53 percent) and Latinos (47 percent).

Slightly more than one-quarter (28 percent) of Arizona adults agree or disagree with the following statement: “I feel less safe because of all the undocumented immigrants living in the state.”

While Republicans are more likely to agree (25 percent) or strongly agree (12 percent) with the statement than either Democrats (11 percent and 9 percent) or Independents (15 percent, 10 percent), the differences are not notable.

Full poll results and findings are available at morrisoninstitute.asu.edu.