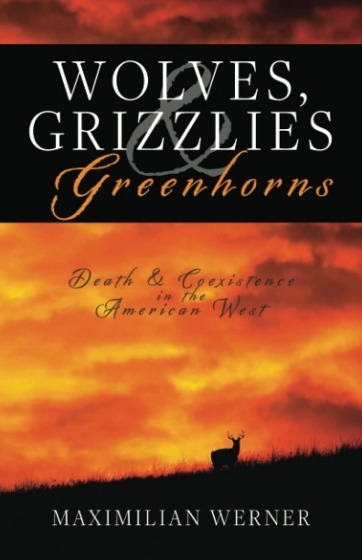 In "Wolves, Grizzlies, and Greenhorns: Death & Coexistence in the American West," Werner recounts the two-and-a-half years he spent tracking down and looking after a wolf pack that was rumored to have settled in the Centennial Valley of southwest Montana. Along the way he encounters and reflects on the lives of other animals, including deer, elk, foxes, coyotes, skunks and grizzly bears. But he also encounters other humans too — ranchers, hunters, land and wildlife managers, cowboys — who offer their own, often conflicting perspectives about the natural world, other animals and how both ought to be treated.

In the wild, wide-open landscapes of the American West, how animals are treated depends on the stories people tell about them, as well as on their ability to steer clear of humans and their livestock — no easy task for animals that are running out of places to go!

The story of conflict between humans and wildlife is as old as humanity. But the landscapes of today bear little resemblance to the landscapes of the past. Over the last several hundred years, human consumption, development, greed and over-population have increasingly displaced large predators. We need new, more nuanced, compassionate, empathetic stories, Werner argues: stories that recognize our place within the natural order, and the value of wild places and other animals’ right to live free of human interference. "Wolves, Grizzlies, and Greenhorns: Death & Coexistence in the American West" is one of those stories.

Maximilian Werner earned a Master of Fine Arts in creative writing at Arizona State University in 1997.

"That the allure of Montana's wolves and grizzlies plays better from afar than it does up close is the river that flows through Maximilian Werner's fine book. This is thoughtful, deeply-considered writing about a modern Montana experience. But its quiet style tracks to a bell-ringer of an ending. Settle in and enjoy, but don't get too comfortable."

"Maximillian Werner ventures into the Centennial Mountains of southwest Montana and finds magic: The howling of a pack of wolves, a grizzly bear near his camp, the dark mountain nights. For two and a half years, this self-described greenhorn returns to the Centennial Valley to learn from local ranchers and wildlife experts about wolves and grizzlies, and what he finds will alarm anyone who cares about these remarkable animals and wilderness they inhabit."