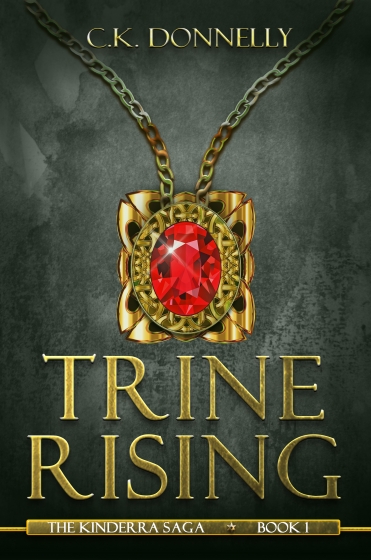 Mirana Pinal, just 16 summers old, knows she’s different. In her homeland of Kinderra, only a small minority of people are born with one of three magical powers — Seeing, Defending, or Healing. Mirana, however, was born with all three, making her a rare Trine, one whose powers can bring peace to the war-ravaged land — or destroy it. Only two other known Trines exist in the current age — Tetric Garis, a hero to Mirana’s people; and the Dark Trine, the ruthless leader of the enemy Ken’nar regime, who is determined to conquer Kinderra and subjugate its people. Trines must train to use their powers, but Mirana’s not interested in being a warrior-hero. For her, destroying her homeland with her Aspects is more than just a possibility. She has terrifying visions that if she wields her powers, she will be the one to bring ruin to Kinderra. Desperate to keep her dark fate from unfolding, she tells no one about her destructive destiny but her beloved, Teague Beltran, a brilliant young herbsman’s apprentice who yearns for powers of his own. She keeps her powers a secret, but fate has other plans. When Mirana receives alarming premonitions of a Ken’nar attack on Kinderra, she is forced to reveal to her people that she is a Trine to warn them of the impending assault. What she doesn’t tell them is that in the same visions, she watches herself unleash unspeakable powers of devastation, crystallized in the image of a watchtower exploding with light. Tetric Garis takes her under his wing and begins instructing her on how to use her powers, but Mirana fears she will cause more peril than forestall it. As the battle draws near, Mirana must search within to discover the true nature of her powers and summon the courage to determine her fate.

While other kids read comic books under the covers with a flashlight at bedtime, C.K. Donnelly wrote fan fiction and fantasy stories. After graduating from Arizona State University, she started her career in the health care field and later pursued her love of writing as an award-winning medical journalist.

"Donnelly excels at crafting a seamless narrative that conveys the unique parameters of the universe at-hand through dialogue, character introspection, and balanced exposition. Descriptions are lyrical, vivid, and nicely polished."

"A truly immersive fantasy! ... The world-building (even language creating!) is so thorough and impressive, and I loved the nuances of each character, especially (and surprisingly!) the villain. As I was reading it, it felt so cinematic to me. This could easily be a movie series as well as a book trilogy."