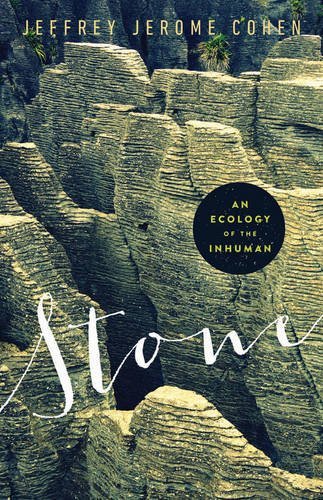 An Ecology of the Inhuman
Author:
Jeffrey Jerome Cohen

"Stone" maps the force, vivacity, and stories within our most mundane matter, stone. For too long stone has served as an unexamined metaphor for the “really real”: blunt factuality, nature’s curt rebuke. Yet, medieval writers knew that stones drop with fire from the sky, emerge through the subterranean lovemaking of the elements, tumble along riverbeds from Eden, partner with the masons who build worlds with them. Such motion suggests an ecological enmeshment and an almost creaturely mineral life.

Although geological time can leave us reeling, Jeffrey Jerome Cohen argues that stone’s endurance is also an invitation to apprehend the world in other than human terms. Never truly inert, stone poses a profound challenge to modernity’s disenchantments. Its agency undermines the human desire to be separate from the environment, a bifurcation that renders nature “out there,” a mere resource for recreation, consumption, and exploitation.

Written with great verve and elegance, this pioneering work is notable not only for interweaving the medieval and the modern but also as a major contribution to ecotheory. Comprising chapters organized by concept — “Geophilia,” “Time,” “Force,” and “Soul” — Cohen seamlessly brings together a wide range of topics including stone’s potential to transport humans into nonanthropocentric scales of place and time, the “petrification” of certain cultures, the messages fossils bear, the architecture of Bordeaux and Montparnasse, Yucca Mountain and nuclear waste disposal, the ability of stone to communicate across millennia in structures like Stonehenge, and debates over whether stones reproduce and have souls.

Jeffrey Jerome Cohen is a professor of English and dean of humanities in the College of Liberal Arts and Sciences at Arizona State University.

"If our historic engagement with stone is the story of cave painting, toolmaking, and home building, Cohen wants to recover a secret history that moves beyond such utilitarian domination. His version is about collaboration and gregarious commingling between humans and stones ... Contemplate a gem to reveal medieval lapidary magic, global trade routes, and the humbling scale of deep time. Cohen zooms out from a pebble to a planet and finds 'a durable link to a dynamic cosmos' ... Cohen wants to make pebbles pulse."