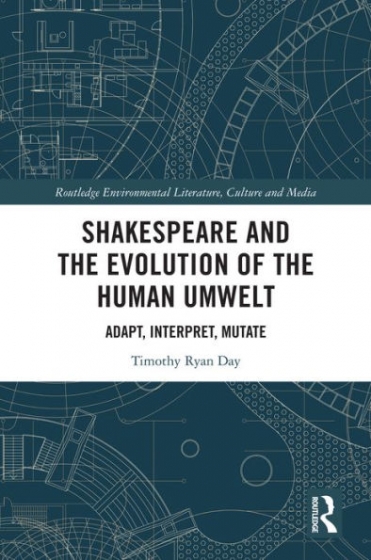 Shakespeare and the Evolution of the Human Umwelt

"Shakespeare and the Evolution of the Human Umwelt" brings together research on Shakespeare, biosemiotics, ecocriticism, epigenetics and actor network theory as it explores the space between nature and narrative in an effort to understand how human bodies are stories told in the emergent language of evolution, and how those bodies became storytellers themselves.

Chapters consider Shakespeare’s plays and contemporary works, such as those of Barbara Kingsolver and Margaret Atwood, or productions for which Shakespeare is a genetic forebear, as evolutionary artefacts that have helped to shape the human umwelt — the species-specific linguistic habitat that humans share in common. The work investigates the juncture where semisphere meets biosphere and illuminates the role that narrative plays in our construction of the world we occupy. The plays of Shakespeare, as works that have had unparalleled cultural diffusion, are uniquely situated to speak to the ways in which ideas and the texts they use as vehicles are always material, always environmental and always alive. The book discusses Shakespeare’s works as vital nodes in our cultural, historical, moral and philosophical networks, but also as environmental actors in and of themselves. Plays are presented alternately as digitally encoded bits of culture awaiting their connection to an analog world, or as bacteria interacting with living organisms in both productive and destructive ways, altering their structure and creating new meaning through movement that is simultaneously biological and poetic.

This book will be of great interest to students and scholars of ecocriticism looking to model ecocritical readings and bridge gaps between scientific, philosophical and literary thinking.

"In this beautiful work of narrative scholarship, Ryan Day succeeds in probing both the intimate and planetary dimensions of green Shakespeare studies and environmental humanities theory. 'Shakespeare and the Evolution of the Human Umwelt' is an impressively learned and engaging book, demonstrating the unexpected relevance of Shakespeare to a wide range of contemporary environmental writing and the vibrant potential of ecocriticism."

Scott Slovic, University of Idaho
Author of "Going Away to Think: Engagement, Retreat, and Ecocritical Responsibility"

"This elegant and accomplished exercise in interwoven narrative history draws fascinating parallels between literature and biology ― from the butterflies of Barbara Kingsolver to tumors in The Tempest ― and yet it ultimately delivers, with surprising prescience, an entirely new way of thinking about the present."

Rachel Corbett
Author of "You Must Change your Life: The Story of Rainer Maria Rilke and Auguste Rodin"