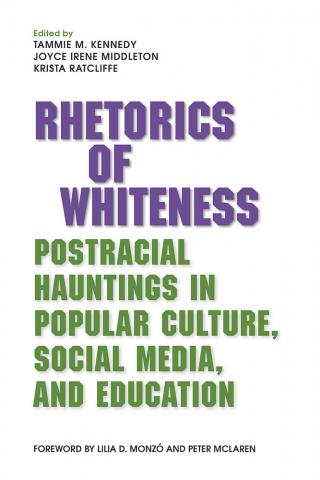 (Winner, CCCC Outstanding Book Award in the Edited Collection Category, 2018). With the election of our first black president, many Americans began to argue that we had finally ended racism, claiming that we now live in a postracial era. Yet near-daily news reports regularly invoke "white" as a demographic category and recount instances of racialized violence as well as an increased sensitivity to expressions of racial unrest. Clearly, American society isn’t as color-blind as people would like to believe. In "Rhetorics of Whiteness," contributors reveal how identifications with racialized whiteness continue to manifest themselves in American culture.

Although whiteness studies has been waning as an active research field for the past decade, the contributors to this volume assert that it hasn’t lost its relevancy because racialized whiteness and issues of systemic racism persist in American society and culture today. By focusing on common, yet often overlooked, contemporary examples of how racialized whiteness haunts U.S. society, this book serves as a valuable text for scholars in the field as well as anyone else interested in the topic.

Krista Ratcliffe is a professor in and chair of the Department of English at Arizona State University.

"The caliber of the scholars who contribute to 'Rhetorics of Whiteness,' the issues these scholars address, and the manner in which they tackle these issues are provocative, bold, and interesting.”

“As the editors point out in their introduction, events of the last few years have disproven the idea that we are in a ‘postracial’ era; therefore, it’s urgent that we preserve the understanding of racism we’ve gained from the study of whiteness. This volume reminds us of what we have achieved (and failed to achieve) and introduces to new students valuable perspectives on topical issues.”

Wendy Ryden
Coauthor with Ian Marshall, "Reading, Writing, and the Rhetorics of Whiteness"