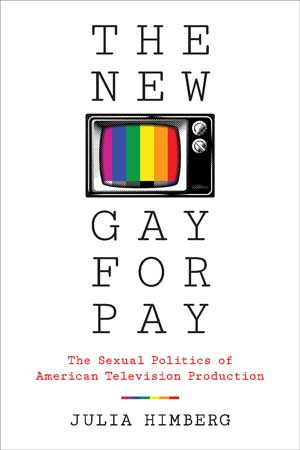 The New Gay for Pay

Television conveys powerful messages about sexual identities, and popular shows such as "Will & Grace," "Ellen," "Glee," "Modern Family," and "The Fosters" are often credited with building support for gay rights, including marriage equality. At the same time, however, many dismiss TV's portrayal of LGBT characters and issues as "gay for pay" — that is, apolitical and exploitative programming created simply for profit. In "The New Gay for Pay," Julia Himberg moves beyond both of these positions to investigate the complex and multifaceted ways that television production participates in constructing sexuality, sexual identities and communities, and sexual politics.

Himberg examines the production stories behind explicitly LGBT narratives and characters, studying how industry workers themselves negotiate processes of TV development, production, marketing, and distribution. She interviews workers whose views are rarely heard, including market researchers, public relations experts, media advocacy workers, political campaigners designing strategies for TV messaging, and corporate social responsibility department officers, as well as network executives and producers. Thoroughly analyzing their comments in the light of four key issues — visibility, advocacy, diversity, and equality — Himberg reveals how the practices and belief systems of industry workers generate the conceptions of LGBT sexuality and political change that are portrayed on television. This original approach complicates and broadens our notions about who makes media; how those practitioners operate within media conglomerates; and, perhaps most important, how they contribute to commonsense ideas about sexuality.

Julia Himberg is assistant professor in the Department of English at Arizona State University, where she teaches film and media studies.

"Reading Julia Himberg's recent book in public, even in Los Angeles, is a bit like wearing a statement piece to church. Fellow coffee shop dwellers, lunchers, and friends see the rainbow-colored television screen emblazoned on the cover, their eyes run over the title, and one question generally leads the conversation: 'What is "The New Gay for Pay"?'"

"This is a terrific book that makes a major contribution in proposing ‘studying up’ interview-based methods for understanding media industries. It changes the game about the politics of representation of LGBT communities. Bravo!"