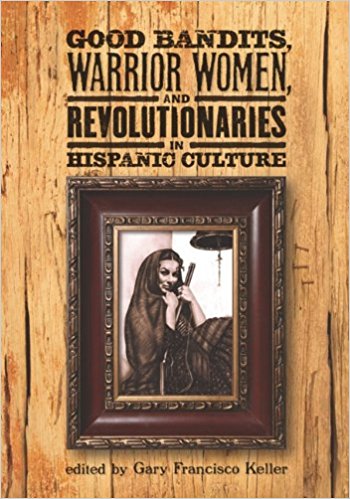 "Good Bandits, Warrior Women, and Revolutionaries in Hispanic Culture" is the fruit of a groundbreaking conference that was held in Phoenix in 2009. Following an introduction by Gary Francisco Keller, the first section of this book contains articles dedicated to good, good-bad, and bad characters, both fictional and historical, across Hispanic culture — among them gay caballeros, the heroes and villains of "Zapata" Westerns and Don Quixote.

The second section explores personages from popular culture and from novels set in the decades just before and during the Mexican Revolution of 1910, such as Demetrio Mac as in Azuela's "Los de abajo"; Angustias Farrera, the title character of the novel and film "La negra Angustias"; Santa Teresa de Cabora and her villainous sister Jovita; Pancho Villa's transformation from bandit/revolutionary to popular saint and hero of the people; and Jesusa Palancares, the fictionalized soldadera of Poniatowska's "Hasta no verte Jesús mío."

Gary Francisco Keller is a Regents' Professor and director of the Hispanic Research Center at Arizona State University.