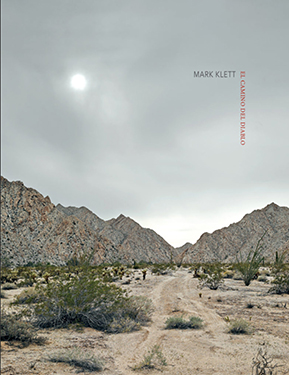 Much of Mark Klett’s photography centers on a conversation with historical images. For this project, Klett worked only with the account of a young mining engineer named Raphael Pumpelly who wrote of his journey through Arizona and Mexico in 1861 on the Camino del Diablo or “the road of the devil.” Pumpelly found the territory lawless and filled with danger. The authorities were virtually non-existent. By Pumpelly’s account he escaped death several times, often by a matter of minutes. Traveling 130 miles of open desert, Pumpelly proceeded with both apprehension of the dangers at hand, and appreciation of the natural beauty that surrounded him. 152 years later, Klett traversed the same route, making photographs in response to Pumpelly’s words. Unable to trace the engineer’s exact steps, Klett created images that are not literal references to specific places. Rather he sought to produce a poetic narrative to their shared experience of the Arizona desert, along the common route that connects the two through time. Today, most of the Camino is located on the Goldwater Bombing Range and the border is a militarized zone constantly patrolled by government agents and crisscrossed by air and ground forces practicing for war. Camino travelers, be they immigrants or drug smugglers moving North, hide from detection under the cover of rugged terrain. A still hostile climate kills many who dare travel in hot weather. Yet the Camino also crosses one of the most beautiful and still wild regions of the Sonoran Desert. The Camino has an occupied feel that registers the history of violence and surveillance along the border. Signs of human passage remain for centuries in Arizona’s dry climate. It is a place located at the compelling intersection of transience, danger and beauty.

Mark Klett is a Regents’ Professor of photography in the School of Art in ASU's Herberger Institute for Design and the Arts.

Klett captures how our contemporary gaze — through the violence of a bullet hole — changes how we understand the landscape: a distant desert mountain peak, a cluster of ocotillo branches, the hot desert floor. ... Klett captures these discrepancies and convergences, as well as the timelessness of the violence — his photography bending the through-line of history into a loop.