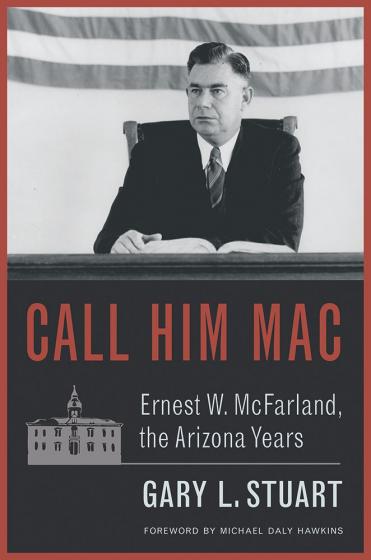 In "Call Him Mac," Gary L. Stuart renders a nuanced portrait of a young, ambitious, restless, and smiling man on the verge of becoming a political force on his way to the highest levels of governance in Arizona and America. Stuart reveals how Mac became an expert on water law and a visionary in Arizona’s agricultural future. Using interviews with friends and family and extensive primary source research, Stuart spotlights Mac’s unerring focus as a loving husband, father, and grandfather, even in times of great personal tragedy. Mac’s commitments to his family mirrored his sense of fiduciary duty in public life. His enormous political successes were answers to how he dealt with threats to his own life in 1919, the loss of his first wife and three children in the 1930s, and a political loss in 1952 that no one saw coming.

Stuart writes the little-known story of how Arizona’s culture and citizens shaped this energetic, determined, likable lawyer. The fame Mac created was not for himself but for those he served in Arizona and beyond. Mac’s unparalleled political success was fermented during his early Arizona years, the bridge that brought him to his future as an approachable and likable elder statesman of Arizona politics.

Gary L. Stuart is a faculty associate in the Sandra Day O'Connor College of Law at ASU.