Youth sports: Is it about the kids or the parents?

The saying “Do as I say, not as I do” might be applied to some parents at youth sporting events.

Research conducted by Arizona State University professors Lindsey Meân and Jeff Kassing examined communication behaviors among spectators at games of children between the ages of 6 and 11, playing various sports. Their analysis, published in International Journal of Sport Communication, revealed a climate often characterized by a winning-at-all-costs attitude and overly aggressive competition. The researchers concluded that communication at youth athletic events was more about the parents’ identity than the children. 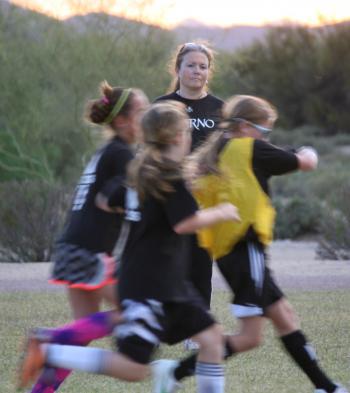 Does this mean you shouldn’t involve your child in youth sports? Not at all, say Meân and Kassing, both of whom participate as youth sports coaches.

“If a sport is coached well, it should also teach children about how to manage healthy competition, to win and lose, and manage both of these experiences effectively,” she said. “Learning to develop and establish skills, motivate yourself and others, and play your role and help others achieve theirs are important. But how these are coached should reflect the age and developmental stage of the children who are not just learning a sport, but learning how to be coached.”

Bad coaching, on the other hand, can not only fail to teach these valuable skills. It also can have negative physical and/or psychological consequences.

“Burnout and dropout from youth sport are becoming increasingly common, notably at ‘elite’ or highly competitive levels,” Meân said. “Research continues to show that lack of fun is one of the key components youth athletes use to account for this.”

Meân pointed out that youth sport is more of an “industry” than it was in the past. Arguably, she said, moving sports organizations out of schools has pushed this professionalization as parents now pay for their children’s sport participation and training, and there is a competitive market for youth sport participation.

But is that what the kids want?

“The enjoyment for kids playing sports is often in the social aspect of being among their friends,” Kassing said. “It is certainly not necessarily about winning.”

Unfortunately, the simple pleasure of participating is often not at the top of parents’ agendas. “I think there is an increasing tendency for parents to think about college sports scholarships when their kids are far too young and when the likelihood of this is actually happening is very small,” Meân said.

Perhaps it is this vision of a child landing an athletic scholarship or pro contract that leads to some of the spectator communication behaviors Meân and Kassing documented in their study. They observed “shake-it-off” comments when a child was seriously hurt, along with messages instructing kids to be overly aggressive and linking sports with war and work. Use of inappropriate or offensive language was common at some games.

“Such behavior creates a climate in youth sports that makes it much more competitive than it needs to be,” Kassing said. “Essentially, sporting practices are downloaded from professional and collegiate expectations to little league.”

The researchers also documented examples of parents’ communication behaviors that treated a child’s lack of success on the field as if it were misbehavior. “Research suggests that kids would rather participate than win, because playing sport is fun,” Meân said. “It can be fun even if you lose, and learning to lose is important. But the adults need to let losing be okay. If the coach manages the loss and the lessons to be learned from it appropriately, kids can learn more about being effective in their sport, as well as in life generally, from losing.”

Some youth sport leagues have implemented training programs to teach more effective and appropriate communication practices. These programs often involve having parents sign a pledge, with the implication that they could be excluded from games for misbehavior.

Even though he has a heightened awareness of this issue, Kassing said it can be challenging for parents and coaches to model positive behaviors. “What I find interesting is how easy it is to fall into the exact traps we have recognized in our research, like being upset with referees or wishing your children played better,” he said. “Knowing better does not necessarily keep you from acting out at youth sporting events.”

Given the influence coaches can have in setting the tone for a team’s behavior, Meân and Kassing recommend taking care in choosing a team and coach.

“I am concerned about the ways in which I see and hear children being coached by some clubs and coaches,” Meân said. “Young children have no sense of what is acceptable and unacceptable action on the field beyond what their coaches teach them. Coaches are the people who teach them what is too aggressive, what is legal or illegal in a game.”

If you have done your homework and found an appropriate team and coach for your child, Meân and Kassing have some tips for making the game experience enjoyable for everyone. They include making only supportive and encouraging comments; keeping the focus on the kids, not the parents, coaches or referees; keeping in mind that winning should be secondary to skill development and enjoyment; and doing fun things like bringing after-game snacks, organizing parent cheers and doing the wave.

Arizona State University is joining Generation Study Abroad, an Institute of International Education (IIE) program that aims to double the number of U.S. college students studying in different countries by the end of the decade.

Less than 10 percent of U.S. students currently study abroad, according to the IIE. ASU is committing to increasing study abroad students by 20 percent between the fall of 2014 and fall of 2019. 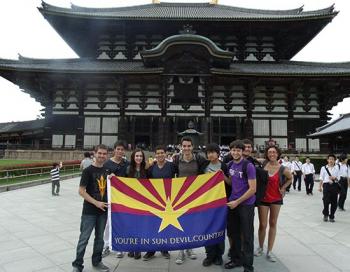 “ASU is committed to graduating global citizens, and study abroad is one distinct way to encourage intercultural growth and development, throughout the world and in the local community,” said Robert E. Page, Jr., ASU Provost. “Studying abroad enhances students’ educational experiences and their understanding of different cultures and countries.”

More than 300 colleges and universities across the country have committed to increasing study abroad student numbers through the program as have study abroad organizations, foreign governments and associations. The IIE is also focusing on increasing the diversity of the students who study abroad to ensure everyone has an equal chance to participate.

“Globalization has changed the way the world works, and employers are increasingly looking for workers who have international skills and expertise,” said Allan Goodman, president of the IIE. “Studying abroad must be viewed as an essential component of a college degree and critical to preparing future leaders.”

More than 800 students are departing this summer to take part in faculty directed study abroad programs. ASU’s goal for academic year 2018-2019 is to send more than 2,000 students abroad. During the 2011-2012 academic year, 1,699 ASU students studied in other countries. Achieving this goal will be met through initiatives such as identifying potential study abroad programs; connecting courses on students’ major maps with specific destinations where the classes are offered; and including information about approved destinations and programs for each ASU major through the university’s online academic catalogue.

In addition, ASU has formed a faculty advisory committee featuring leadership from all four campuses that will integrate study abroad in all of the colleges and schools at the university, as well as provide advisement and develop international leaders. The university is also committing to exploring study abroad scholarships that will allow students to plan for their future and enhancing training for academic advisers and faculty directors in areas such as intercultural competency development.

According to the Open Doors Report on International and Educational Exchange released last November, 295,000 students studied abroad in 2011-2012, in credit- and non-credit programs. Generation Study Abroad aims to grow participation in study abroad to 600,000 students per year by the end of the decade.

Generation Study Abroad will engage educators at all levels and stakeholders in the public and private sectors to work to increase the number of U.S. students who have the opportunity to gain international experience through academic study abroad programs, as well as internships, service learning and non-credit educational experiences. The IIE has committed $2 million in funding for the initiative during the next five years.