From winning a softball championship to marking a solar milestone, ASU has had a busy year. Here we take a look at the top 10 news stories from the university that have occurred over the past year. 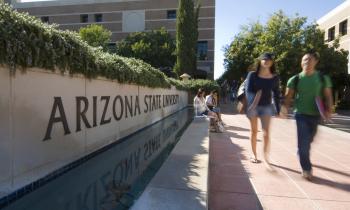 A fossilized foot bone recovered from Hadar, Ethiopia, showed that by 3.2 million years ago human ancestors walked bipedally with a modern human-like foot, according to a report that appeared in the Feb. 11 edition of the journal Science. The fossil, a fourth metatarsal, or midfoot bone, indicated that a permanently arched foot was present in the species Australopithecus afarensis. The report's authors included Carol Ward of the University of Missouri and William Kimbel and Donald Johanson of ASU’s Institute of Human Origins.

Tyler Eltringham is not what you would call a typical college student. From being homeless at 16 to becoming the leader of a new venture at 20, Eltringham has taken a different route than most. Despite the odds stacked against him, he has come out on top. Eltringham is the CEO of OneShot, a startup dedicated to providing meningococcal meningitis vaccinations to college students living in dormitories and university housing. “The funding model of OneShot emulates Tom’s Shoes,” Eltringham said. “In a one-for-one fashion, for every meningitis shot purchased on a university campus, we donate a vaccination to the meningitis belt of Africa.”

Glow-in-the-dark mushrooms, a batfish flat as a pancake that appears to hop in the water, Titanic-eating bacterium, and a T. rex leech with enormous teeth were among the new species from 2010 selected as the top 10 by the International Institute for Species Exploration at Arizona State University and a committee of taxonomists from around the world – scientists responsible for species exploration and classification.

The ASU softball team won its second NCAA title in the past four years after they defeated the Florida Gators in two straight games, 14-4 and 7-2. It continued a run of six consecutive championships for the Pac-10, which has won 23 of the 29 titles all time. The Pac 10 also celebrated the title as its 400th national championship in any sport – more than any other league. Arizona State joined UCLA, Arizona and Texas A&M as the only teams to win multiple softball titles.

On July 8, the space shuttle Atlantis streaked skyward from the Kennedy Space Center’s launch pad 39A, for one last mission. While the STS-135 flight markedd the end of the space shuttle’s glory days, its final trip may open a new era of research into infectious diseases, thanks to space bound experiments conducted by Cheryl Nickerson, and Roy Curtiss III, along with their colleagues at Arizona State University’s Biodesign Institute. Nickerson, a microbiologist and authority on infectious pathogens, has been using spaceflight or spaceflight analogues since 1998 as an exploratory platform for investigating the processes of infection.

Arizona State University opened a new veterans center on campus, named after one of its most renowned student athletes, Pat Tillman, who died serving his country in Afghanistan. The Pat Tillman Veterans Center is a 3,340 square foot facility located in the lower level of the Memorial Union on the Tempe campus. It provides a single point of contact for ASU veterans and their dependents, bringing together academic and student support services to promote a smooth transition from the military.

Arizona State University has exceeded 10 megawatts (MW) of solar-energy capacity, making it the only higher education institution in the United States to have a solar capacity of that size. According to Ameresco Southwest, Inc. – formerly APS Energy Services, Inc. – 10 MW is enough energy to power 2,500 Arizona homes. “Surpassing 10 megawatts of solar energy capacity is a tremendous accomplishment for ASU and our partners,” said ASU President Michael Crow. “Over the years we have made several major commitments to sustainability, such as establishing the first school devoted to sustainability, raising awareness of how to live sustainable lives and finding ways to harness natural resources, like our abundance of sunshine. By doing these things, we are making a brighter future for ourselves and the place in which we live.”

Arizona State University is no stranger to space exploration missions. Whether to Mars or other solar system targets, its involvement with NASA planetary exploration began in the 1970s and at present, professors and researchers from ASU’s School of Earth and Space have instruments on board or play a significant role with six NASA missions and one European Space Agency (ESA) mission. Others are in the wings.

The top green UK retailer, Tesco, and its Sustainable Consumption Institute at The University of Manchester bring retail and academic expertise to The Sustainability Consortium.

ASU has announced that Tesco is joining The Sustainability Consortium, an independent group of global businesses, academics, governments and non-governmental organizations that work collaboratively to drive innovation in consumer product sustainability.

The Tesco-funded Sustainable Consumption Institute (SCI) at The University of Manchester also will become an academic member of the Consortium. Tesco joins 16 other European members that provide The Sustainability Consortium a strong foothold in the region.

Joining the consortium is a further boost to Tesco’s work on sustainability and comes after its commendation as the top green UK retailer by the internationally recognized Carbon Disclosure Project. By focusing on environmental and social sustainability in the supply chain, the consortium’s collaboration between Tesco and other global businesses will drive sustainable production and consumption in the consumer goods market. This partnership builds on the consortium’s recent opening of a European branch at Wageningen University & Research Centre in The Netherlands.

Tesco estimates that it saved £200 million in global energy costs last year by going green and aims to be a zero-carbon business by 2050. In addition to opening the world’s first zero-carbon supermarket2, Tesco has carbon footprinted over 1,100 products since 2008, currently the largest product footprinting project undertaken by any retailer.

“Successful collaboration between leading global businesses – whether they are retailers, wholesalers, suppliers or producers – will go a long way in helping companies reduce their carbon emissions and thereby reduce the carbon footprints of the products we sell," said Helen Fleming, Group Climate Change director. "This will help consumers make more sustainable choices about the products they buy. The Sustainability Consortium has a great opportunity to show the world that living greener lives can be attractive and affordable and that small changes really do make a big difference. We’re proud to be a member of the consortium and look forward to collaborating with the many other businesses and organizations.”

Professor Alistair Ulph, executive director of The University of Manchester’s Sustainable Consumption Institute said, “The SCI is looking forward to collaborating with the Sustainability Consortium on research projects where there are shared interests, such as developing product category sustainability profiles and a deeper understanding of how best to influence consumers to adopt more sustainable lifestyles. We are pleased to be the first UK university involved with the consortium and look forward to collaborative research with their business and academic partners.”