An international team of scientists, using the world’s most powerful X-ray laser, has revealed the three dimensional structure of a key enzyme that enables the single-celled parasite that causes African trypanosomiasis (or sleeping sickness) in humans.

With the elucidation of the 3D structure of the cathepsin B enzyme, it will be possible to design new drugs to inhibit the parasite (Trypanosoma brucei) that causes sleeping sickness, leaving the infected human unharmed. 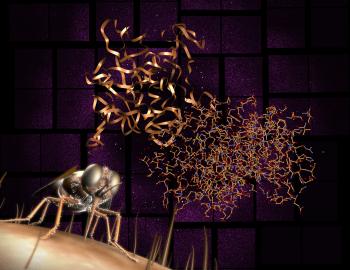 The research team, including several ASU scientists, is led by the German Electron Synchrotron (DESY) scientist Henry Chapman from the Center of Free-Electron Laser Science (CFEL), professor Christian Betzel from the University of Hamburg and Lars Redecke from the SIAS joint Junior Research Group at the Universities of Hamburg and Lübeck. They report their findings this week in Science.

"This is the first new biological structure solved with a free-electron laser," said Chapman of the development.

"These images of an enzyme, which is a drug target for sleeping sickness, are the first results from our new ‘diffract-then-destroy’ snapshot X-ray laser method to show new biological structures which have not been seen before,” explained John Spence, ASU Regents’ Professor of Physics. “The work was led by the DESY group and used the Linac Coherent Light Source at the U.S. Department of Energy’s SLAC National Accelerator Laboratory."

Transferred to its mammalian host by the bite of the tsetse fly, the effects of the parasite are almost always fatal if treatment is not received. The sleeping sickness parasite threatens more than 60 million people in sub-Saharan Africa and annually kills an estimated 30,000 people. Current drug treatments are not well tolerated, cause serious side effects and the parasites are becoming increasingly drug resistant.

“This paper is so exciting as it is based on nanocrystals grown by the groups at DESY in Hamburg and at the University of Lübeck inside living insect cells,” said Petra Fromme, a professor in ASU’s Department of Chemistry and Biochemistry. “This is the first novel structure determined by the new method of femtosecond crystallography. The structure may be of great importance for the development of new drugs to fight sleeping sickness, as it shows novel features of the structure of the CatB protein, a protease that is essential for the pathogenesis, including the structure of natural inhibitor peptide bound in the catalytic cleft of the enzyme.”

An additional difficulty includes the fact that the cathepsin B enzyme is also found in humans and all mammals. However the discovery of the enzyme’s 3D structure has enabled the researchers to pinpoint distinctive structural differences between the human and the parasite’s form of the enzyme. Subsequent drug targets can selectively block the parasite’s enzyme, leaving the patient’s intact.

The ASU group developed the sample delivery system, worked on the characterization of the crystals with dynamic light scattering and SONNIC and did the early development work on the new data analysis method. All ASU participants are members of the College of Liberal Arts & Sciences.

International team members in addition to those already mentioned include researchers from the Max Planck Institute, Heidelberg, University of Gothenburg, University of Tübingen and Lawrence Livermore National Laboratory.

The interactive roundtable will be streamed live online by ONcam and fans are encouraged to join the conversation via their webcams at:

Those who wish to partake in the open forum can easily create an account at oncam.com and then submit their questions via webcam or text chat, or can simply watch the discussion live on their computer.

Fans can also submit questions over the next week onFacebook.com/ArizonaStateSunDevils and on Twitter using #OnCamMagee and #OnCamDarby.