UP NEXT
The Arizona State women's basketball team closes out the home portion of its 2011-12 schedule this week when it hosts Washington (Thursday at 6:30 p.m. MT) and Washington State (Saturday at 2 p.m. MT). This week's games will be the final at home for Sun Devil seniors Kali Bennett, Kimberly Brandon, Alex Earl, Olivia Major and Haley Parsons, who will be honored in a ceremony following Saturday's game against the Cougars.

ASU went 9-2 in non-conference play and won its first Pac-12 contest (defeated Arizona 60-45 on Dec. 31) before losing three straight games vs. USC, vs. UCLA and at Oregon State to fall into a tie for ninth place in the Pac-12. The Sun Devils then rebounded with five straight wins, including wins on the road at Oregon, at Washington and at Washington State, to climb all the way back into a tie for second place. Consecutive home losses to No. 4 Stanford and Cal and a loss on the road to Utah sent ASU back into a tie for fifth place before the Sun Devils bounced back with Saturday's win at Colorado.

Janae Fulcher (16 points) and Earl (career-high 14 points) came off the bench to combine for 30 points to help propel ASU on Saturday. Bennett added 10 points for the Sun Devils, who came through with another solid defensive effort as they held Colorado more than 16 points below its scoring average.

Promise Amukamara (seven points) came off the bench to combine for 14 points in the second half.
Two days later at Washington, it was Deja Mann who came through in the clutch as the junior guard scored seven of her 12 points in the final 4:30 while Brandon hit a pair of free throws with eight seconds left to help the Sun Devils preserve the win.

RADIO/WEBCAST
Thursday's game vs. Washington can be heard live on The Fan AM 1060. Coverage will begin at 6 p.m. Veteran broadcaster and the state of Arizona's 2010 Broadcaster of the Year Jeff Munn is in his eighth season as the voice of ASU women's basketball. He will be joined by former Sun Devil head coach Maura McHugh.
Fox Sports Arizona will also be carrying a live webcast of Thursday's game at www.foxsportsarizona.com. 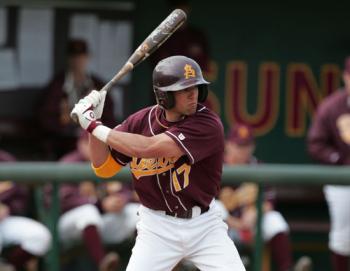 GETTING TO THE GAME
Tickets to games at ASU's Packard Stadium start at $8 for adults and $6 for youth (ages 16 and under) and seniors. ASU students earn free admission with their SunCard. The Sun Devils' home stadium is located on the Northeast side of campus, along Packard Dr., just east of Sun Devil Stadium and south of Loop 202.

Leading Off:
The Arizona State Sun Devils open the 54th season of Sun Devil baseball by hosting the Western Michigan Broncos in a three-game series at Winkles Field-Packard Stadium at Brock Ballpark. The Devils and Broncos will open the 2012 season on Friday night, followed by a day game on Saturday before wrapping up the opening weekend with the series finale on Sunday.

Devils vs. Western Michigan and the MAC:
This is the first time in school history ASU has faced Western Michigan from the Mid-American Conference (MAC). The Devils are a combined 18-2 all-time against opponents from the MAC, including 6-2 vs. Eastern Michigan, 1-0 vs. Kent State, 2-0 vs. Miami (Ohio), 8-0 vs. Northern Illinois and 1-0 vs. Temple.

New Faces On The Bases:
Junior Joey DeMichele will begin the 2012 season at second base after spending most of last season as the team's designated hitter. Senior Abe Ruiz, who made three starts last season, is likely to see the majority of time at first base, while sophomore Michael Benjamin is set to take over third base from departed Riccio Torrez.

Packing Them In:
For the seventh consecutive year and the eighth time in the last nine years, Arizona State led the West Coast (excluding Hawai'i) in attendance. 104, 317 fans came to Winkles Field-Packard Stadium at Brock Ballpark during the 2011 season, the 18th highest total in the entire nation. No other Pac-12 team ranked in the Top 25 in national attendance.

Opening Night:
The Sun Devils will open their 54th season of varsity baseball against Western Michigan. Arizona State is 41-11-1 all-time in season openers. The Devils won last year on Opening Night, beating New Mexico 8-2 at Winkles Field-Packard Stadium at Brock Ballpark. Retuning starter Brady Rodgers allowed just two singles and struck out five through five innings, and departed Riccio Torrez turned in a multi-homer game to help the Devils win its fifth straight season opener. ASU has not opened a season on the road since 2003, when they began the year at Hawai'i-Hilo.

2011 Recap:
The Sun Devils finished the 2011 season with a 43-18 record, a 17-10 Pac-10 Conference record and earned an at-large berth in the NCAA Tournament, advancing to the Super Regionals before falling to the University of Texas in three games. ASU swept the Tempe Regional, the fifth straight year on the field that Packard Stadium has played host to a Regional, beating New Mexico, Charlotte and Arkansas. Last season marked the 49th straight year that Arizona State has topped the 30-win mark on the field and the 32nd time with more than 40 victories. Head coach Tim Esmay recorded the second highest winning percentage (.810) among ASU head coaches over their first 100 games. Joey DeMichele won the Pac-10 batting crown with his .368 average, the second straight year and fourth time in the last five years a Sun Devil has won the title, and also led the conference in slugging percentage at .663. Zack MacPhee won the Pac-10 stolen base title with 27 swipes, the third straight year a Sun Devil led the Pac-10 in steals. Deven Marrero was named the Pac-10 Defensive Player of the Year, becoming the second Sun Devil to ever win the award (Eric Sogard, 2007) and marking the sixth straight year Arizona State had at least one Pac-10 individual award winner. The Sun Devils also led the Pac-10 in extra base hits (201), doubles (136), triples (28) and home runs (37).

Legacy Devils:
The 2012 Sun Devil team features four student-athletes with unique connections to Arizona State. Sophomore Trever Allen is the son of Jamie Allen, who played three seasons at ASU, including the 1977 National Championship year. Jamie was a lifetime .333 hitter at ASU and he also went 6-2 on the mound. He was a two-time All-WAC team member and was a member of the 1977 All-College World Series team. Freshman INF/OF Jake Wakamatsu also has Maroon and Gold in his blood, as his father Don was a four-year letterwinner for Arizona State from 1982 to 1985. A three-year starter at catcher, Don was a three-time First Team All-Pac-10 selection and was a member of two Pac-10 Championships teams and twice played in the College World Series. Don played for the Chicago White Sox in 1991 and became the first former Sun Devil baseball player to be named a Major League Baseball manager when he was hired by the Seattle Mariners prior to the 2009 season. He is currently the bench coach of the Toronto Blue Jays. Joining Wakamatsu and Allen as Legacy Devils are redshirt freshman Tucker Esmay and sophomore Michael Benjamin. Esmay is the son of head coach Tim Esmay and Benjamin is the son of assistant coach Mike Benjamin. The elder Esmay and Benjamin were teammates on the 1986 and 1987 Sun Devils.

Notable Connections:
Freshman LHP Brandon Bonilla's father Bobby played 16 seasons in the Major Leagues (1986-2001) for eight different teams, including the Chicago White Sox, New York Mets, Los Angeles Dodgers, Atlanta Braves and St. Louis Cardinals. He was a six-time All-Star and won the 1997 World Series as a member of the Florida Marlins. Brandon is also the godson of former Sun Devil legend and MLB Home Run King Barry Bonds, who was teammates with his father on the Pittsburgh Pirates...Fellow freshman INF Drew Stankiewicz's father Andy also played in the Major Leagues, spending seven seasons with the New York Yankees, Houston Astros, Montreal Expos and Arizona Diamondbacks. Andy was an assistant coach at Arizona State from 2007-09, collecting two Pac-10 titles and a trip to the 2009 College World Series, and is currently the head baseball coach at Grand Canyon University...Redshirt sophomore catcher Beau Maggi is the brother of Drew Maggi, who starred at ASU in 2009 and 2010...Sophomore RHP Mark Lambson is the brother of Mitchell Lambson, who made 102 appearances for ASU from 2009-11, tied for the second most in school history...Sophomore shortstop Deven Marrero is the cousin of Chris Marrero, a first baseman for the Washington Nationals.

Tough Schedule:
The Sun Devils will play 19 games this season against teams ranked in the Preseason Top 30, including 10 at Packard Stadium and nine on the road. ASU will host a three-game series against both No. 26 Cal (March 23-25) and No. 22 Oregon State (April 5-7), and will welcome No. 18 Arizona for two separate single-game sets on April 17 and May 16, respectively. No. 19 Cal State Fullerton will also come to Tempe for a two-game tilt March 27-28. The Devils travel to Los Angeles March 16-18 to face No. 20 UCLA and will play No. 2 Stanford in Palo Alto, Calif., April 20-22. They finish the season with a three-game series against the Wildcats in Tucson, Ariz., May 25-27.

Up Next:
Arizona State will host UC Riverside in a three-game series that begins Friday at Winkles Field-Packard Stadium at Brock Ballpark. First pitch is scheduled for 6:30 p.m. (MT) on Friday in Tempe.