Janae Fulcher (16 points) and Alex Earl (career-high 14 points) came off the bench to combine for 30 points to lead the Arizona State women's basketball team to a 60-47 win over Colorado. 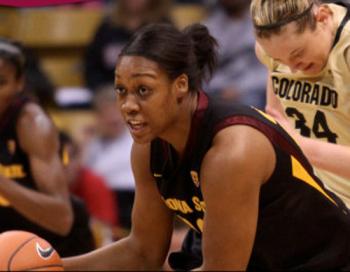 The Sun Devils, who outrebounded Colorado 43-25, scored 26 points off 24 Colorado turnovers and used a 15-6 advantage on the offensive boards to score 13 second chance points.

At the same time they were building their 18-point lead, the Sun Devils put the clamps on Colorado's offense as they limited the Buffaloes to 3-12 shooting while forcing 10 turnovers over the first 13:23 of the second half.

Colorado would counter with a 12-1 run over a three-minute stretch to get within seven points, 52-45, with 3:16 left, however the Sun Devils would reel off five unanswered points to build their lead back up to 57-45 with 1:40 left. The Buffaloes would get no closer than 10 points the rest of the game.

The Sun Devils continued their best start in program history with an 8-4 victory over No. 6 UC-Irvine for the championship in San Diego.

The No. 5 Arizona State University water polo team continued its undefeated run through the 2012 season, improving its program’s best start to 12-0 with a championship title at the Triton Invitational in San Diego, Calif., on Sunday.

The Sun Devils (12-0, 0-0 MPSF) held off No. 12 Loyola Marymount (4-4, 2-0 WWPA) in the semifinal matchup, 10-9, before utilizing a dominating defense effort to drop No. 6 UC-Irvine (9-2, 0-0 Big West) in the championship final.   It was the second time ASU has gotten the better of the Anteaters this season, handing Irvine its only two losses on the year. 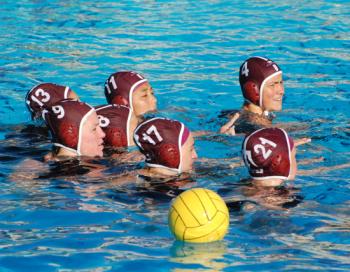 Senior Alicia Brightwell was again the star of the day, netting seven goals on the final day of competition to bring her two-day total to 12 and her season total to 31.

Arizona State will now enter its first bye week of the season before taking part at the UC-Irvine Tournament set to begin Feb. 24 in Irvine, Calif.  That competition will mark the first time this season that the Sun Devils will face fellow MPSF conference rivals.

For complete recaps of each of today’s competition, see below:

The No. 5 Sun Devils had their work cut out for them in the semifinal matchup of the Triton Invitational in facing a scrappy team from Loyola Marymount.  Arizona State got out to a quick 3-0 lead on the heels of two goals from Alicia Brightwell in the first quarter and led 4-1 heading into the second.

The lead remained three as each team added a goal a piece to send the game into halftime with ASU leading 5-2.

The teams continued to trade goals in a high-scoring third period that saw each squad find the back of the net three times, including two goals from Annabelle Carter.  ASU maintained its three goal-lead heading into the deciding fourth quarter.

In the fourth, freshman Anna Kertes added her first goal of the game to put ASU up 9-6 after an early LMU goal. The Lions answered with another goal just 33 seconds later as Morgan Bonk found the back of the net for the second time in the game to make it 9-7.

The pressure didn’t get a hold of Brightwell though, as she put in her fourth goal of the game with 3:10 left in regulation to give ASU the 10-7 edge.

LMU wouldn’t go quietly into the night though, scoring goals with 1:35 left and :49 left to make it a one goal game with under a minute remaining.  The Lions got one last shot with about 12 seconds left in the game but couldn’t find the back of the net and ASU escaped with the 10-9 decision to improve to 11-0 on the year and advance to the tournament’s final against #6 UC –Irvine.

Brightwell led the way with her four goals while Carter found the back of the net three times in the contest.   Goalkeeper Ianeta Hutchinson had five saves on the game.

Arizona State University Todd Clapper has harped on his team’s need to continue getting better on the defensive end throughout the season, and he saw his team bring that sentiment to fruition as the No. 5 Sun Devils stifled the No. 6 UC-Irvine offense en route to a 8-4 victory in the championship game of the Triton Invitational in San Diego.

Senior Alicia Brightwell continued her scoring tear, netting three goals in the first half while the Sun Devil defense made things difficult for the Anteater offense as ASU entered halftime with a 4-1 advantage.

UC-Irvine didn’t give in though and brought the game within two goals three times over the second half, but each time Arizona State freshman Anna Kertes had an answer.  After the Anteaters made it 4-2 just 19 seconds into the second half, Kertes responded with her first goal of the game to make it 5-2 in favor of ASU and provide the eventual game-winner in the process.

Irvine would make it 5-3 later in the quarter but Kertes responded again with her second goal of the game just 29 seconds later to put ASU up 6-3 heading into the fourth.

In the fourth, UCI again made it a two goal game on a Danielle Ward goal, just to see Kertes net her third of the game about half a minute later and the Sun Devils held the Anteaters scoreless for the remainder of the game, with a Kelsey White goal bring the final score to 8-4.

The star of the day was goalkeeper Ianeta Hutchinson though, who was a brick wall in the cage with 13 saves to just four goals against for an impressive .765 save percentage, her second-highest single game total this season.

Brightwell's three goals in the nightcap brought her two-day total to 12 and she leads all Sun Devils with 31 goals already this season.