Women & Philanthropy, a philanthropic program of the ASU Foundation for A New American University, has awarded $308,808 to four Arizona State University programs that enhance ASU’s goals of excellence, access and impact.

The group’s largest award, a $100,000 grant, will go to the Pave Program in Arts Entrepreneurship in the Herberger Institute for Design and the Arts. The Pave Program infuses the concept of entrepreneurship throughout arts education, teaching students not only their craft, but also how to create business and non-profit opportunities so they can earn a living and contribute to their communities with their chosen art form.

The three other 2013-2014 grant awards will help establish ASU as a global center for biomedical research, enable journalism students to report groundbreaking stories from remote locales across Arizona and promote engineering service-learning.

Women & Philanthropy is one of three engagement programs housed within the ASU Foundation for A New American University. Its grants are generated from the individual contributions of investors, who now number 255. Each member's annual contribution – a minimum of $1,000 – is pooled with others to allow the group to have a greater investment impact on ASU programs and scholarships.

Grant proposals are solicited and reviewed each year by the Women & Philanthropy investment committee and narrowed to a handful of finalists. The entire membership then votes on those that they believe best demonstrate ASU’s leadership and national standing in academic excellence, research and discovery, and local and societal impact. This structure empowers each investor to steward her gift and witness its impact.

Artist Sustainability, Leadership and Engagement through the Pave Program in Arts Entrepreneurship
Herberger Institute for Design and the Arts | School of Film, Dance and Theatre
$100,000

The Pave Program in Arts Entrepreneurship teaches emerging artists that through creative engagement with communities and audiences, they can sustain careers in the arts that are meaningful, impactful and excellent. Pave infuses entrepreneurship into arts education through undergraduate and graduate classes; an arts venture incubator that nurtures student-initiated projects; public programming; and faculty development and research, including the journal Artivate: A Journal of Entrepreneurship in the Arts.

Synthetic biology enables inventors – from student researchers to professional scientists – to help develop new technologies with DNA molecules. This program will position ASU as the global epicenter of transforming DNA design ideas into solutions for problems that impact everyday life. Synthetic Biology ASU will be a collection of DNA building blocks for synthetic genes and community-sourced information that will be distributed to scientists and students around the world.

In this era of shrinking newsroom budgets, important stories across Arizona are going untold. Examples include children on the Navajo Nation who fight for access to health care, or migrant families struggling to make ends meet. This program will greatly enhance journalism students’ newsgathering operations in places that are often underrepresented by the media. Funds will purchase the Dejero video transmitter. The size of a backpack, this cutting-edge technology will enable students to report from remote locations.

EPICS is an engineering service learning program that incorporates the engineering design process in solving real-world problems. To do this, EPICS teams work with non-profit agencies, as well as students across disciplines. In doing so, engineering students provide needed services and hone their skills as engineers and entrepreneurs. This program also engages high school students in order to promote community service and increase the pipeline of students in STEM pathways.

Editor's Note: This is an ongoing feature that is part of our coverage of ASU's spring commencement. Check back for updates, as more student profiles will be added leading up to and throughout the week of graduation.

This spring, more than 12,000 students are set to graduate. 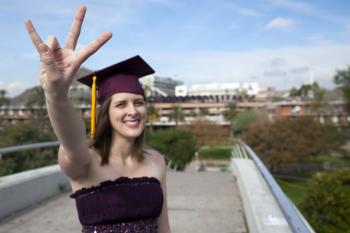 They come from diverse backgrounds and a wide range of disciplines. They are looking to start businesses, change the world, travel to new places and learn new cultures. Some of them are outstanding graduate award winners.

“Poetry can be used to reclaim national identity in times of political and social crises,” explains Jake Adler, who will graduate this spring with a bachelor's degree in creative writing, focus in poetry. In April, the Fulbright Program awarded Jake Adler for his research proposal on the influence of the revolutionary Indian poet Rabindranath Tagore. He will be funded to travel and work in Calcutta, India, for nine months.

Raquel Aviles once considered herself a long shot when it came to furthering her higher education, but the 40-year-old mother of three has beaten the odds and next week she’ll experience the big payoff as the School of Letters & Sciences Outstanding Graduate for 2014.

Since coming to ASU, Megan Best has researched many subjects, from chameleon color change to primate dentition. Set on a career in primatology, she is graduating in May with bachelor's degrees in anthropology and biological sciences with a concentration in animal physiology and behavior.

Inspired by a sense of duty to the world, David Choi, a senior majoring in economics and supply chain management and mathematics at Arizona State University, is on a mission to tackle hunger and food security issues. “With the help of structured thinking and decision-making, I hope to develop a skill set that can be useful in helping solve business and social problems,” said Choi.

Named an Outstanding Teacher Candidate by ASU's Mary Lou Fulton Teachers College, Lauren Edgar plans to join Teach For America in June after having already produced classroom results that most educators strive for. Edgar's work helped her students achieve 80 percent math proficiency – among the school district's highest scores – in an assessment used to predict the next round of AIMS test outcomes.

Asked what especially interests him about geography, Jason Edmunds hones in on the concept of studying place and time. He found this passion for geography after a life trajectory that led him from high school straight into the workforce, and after some years' success in the high-tech industry, with positions as a project manager, technical editor and consultant.

A native of Tegucigalpa, Honduras and the first in her family to earn a college degree, Alejandra Frost graduated with a 3.98 GPA. She was selected as the outstanding graduate of the School of Community Resources and Development for the Spring 2014 College of Public Programs Convocation.

Creative and musical ASU graduate Devon Johnson is finding a way to combine his passions for film, history and teaching as he joins Teach For America in June. “I’ve always wanted to be a teacher,” says Johnson. “So I’m going to keep film as my passion and do what I want to do, which is teach.”

Channeling her inner urge to create and try different things, Katelyn Keberle decided to major in materials science and engineering. The 21-year-old has focused on exceeding expectations at every opportunity that crosses her path, and so it comes as no surprise that she is this year's outstanding engineering graduate.

Who will suffer most if things go wrong with nuclear power? Dean Kyne answers the question with a first-of-its-kind dissertation on nuclear risks from an environmental justice perspective. Kyne graduates this May with a doctorate in environmental social science from ASU's School of Human Evolution and Social Change.

Father and daughter Karl and Stephanie Lauk graduated together with degrees in electrical engineering from Arizona State University’s Ira A. Fulton Schools of Engineering. Now the two new graduates will join Stephanie’s mother and Karl’s wife of 30 years, Wendy, as ASU alumni.

Alasdair Martin went from slinging French fries to earning the Department of Economics dean's medal. Working as a cook at a local fast-food restaurant, he asked himself, "Do I really want to do this for the rest of my life?" Now, he is graduating from ASU with high honors and plans to become a college economics professor.

Brandy Naleski was inspired to get her master's degree in applied behavior analysis as a result of her experiences with her son who was diagnosed with autism at the age of two. "As any parent would, I immediately delved into researching and trying to learn everything I could about this disorder."

At 7, Andres Neal was selling gum on the street in Mexico to help get food for his family. This month, he’ll graduate from the College of Technology and Innovation, earning a bachelor's degree in engineering with a mechanical systems focus. Already he has had several second job interviews, and executives are impressed with all the hands-on experience he has gotten.

When Amanda Orozco began her studies at ASU in fall 2010, she started out as a biology major intending to concentrate on conservation biology. Four years later, the California native has taken her love of nature down the environmental science route. Orozco is this year's Dean’s Medal recipient for the School of Earth and Space Exploration.

Armed with undergraduate degrees in molecular biosciences and biotechnology, political science, and international studies from Barrett, The Honors College at ASU, Nisarg Patel is ready to pursue a doctorate at the Harvard School of Dental Medicine. Patel, who is an entrepreneur, scientist and avid volunteer, is the 2014 Outstanding Graduating Senior.

During his time at ASU, Oscar Patterson-Lomba has earned a reputation as an exemplar of cross-disciplinary scholarship – studying some of today’s most profound health issues using tools pulled from mathematical and computational epidemiology, evolutionary biology, statistics and network theory. His dissertation looks at infectious diseases in the context of urban environments and drug resistance. He has accepted a postdoctoral appointment at the Harvard School of Public Health.

Clemente and Maurilio Rico Rodriguez were born five minutes apart in a small town in Mexico. This month, they graduate from The Design School in ASU's Herberger Institute for Design and the Arts, the first members of their family to go beyond elementary school.

Arizona Gov. Jan Brewer recently recognized Savannah Sanders, who has dedicated her undergraduate career in social work, o giving sex trafficking victims a voice in the criminal justice process. The recipient of the 2014 Triumph Over Tragedy award, Sanders is about to celebrate another achievement this month when she becomes the first person in her family to graduate with a bachelor's degree.

Carley Tafoya isn’t planning on earning a six-figure salary after earning her law degree. Tafoya will work for change and justice for her people, the Jicarilla Apache Nation. Tafoya has excelled during her years at ASU, most recently by being named the College of Liberal Arts and Sciences Dean’s Medalist in American Indian studies as well as being nominated for the Dean’s Medal in justice studies. She is also this year’s recipient of the Jean Chaudhuri Memorial Scholarship.

Ben Warner is using his research findings to refine current water management policy in the rural, semi-arid region of northwestern Costa Rica. He will receive his doctorate in sustainability this May from ASU's School of Sustainability.

When Mauro Whiteman enrolled at ASU’s Cronkite School in 2010, he suspected it would be an exciting time. He didn’t realize he’d be in for a major adventure. The 22-year-old senior has covered a major election cycle for the Associated Press, visited Nogales, Ariz., and Mexico, to report on complex border issues, witnessed the birth and death of the Occupy Phoenix movement, and helped cast a national spotlight on the plight of post-9/11 veterans.

Throughout Erica Wiedemeir's college career, she's produced videos for ASU Video Production, interned for Showtime in New York City and has interviewed celebrities. After graduation she hopes to work in media in NYC. "I love to hear about people's lives and stories."