Why are we stuck in low-Earth orbit? ASU events explore future role of humans in space

If space is the final frontier, then why are we so tentative about exploring it and moving away from Earth? Space exploration comes with huge risks and a high price tag, but if we ever wanted to leave a truly lasting legacy, then humans will eventually need to have a permanent presence beyond our home planet.

Two events on Arizona State University’s Tempe campus will take a penetrating look at the future of space exploration and ask why progress has been so slow since Neil Armstrong landed on the moon 43 years ago.

The first event, fittingly, will be given by an astronaut who has logged more than 75 million miles in space. At 7:30 p.m., Oct. 25, Neeb Hall, Australian-born Andrew Thomas will deliver the 2012 Eugene Shoemaker Memorial Lecture, an annual event organized by ASU’s Beyond Center for Fundamental Concepts in Science to celebrate the life and work of Arizona-based Gene Shoemaker, a pioneer of cosmic impacts who also helped train the Apollo astronauts. Titled “Human space flight: Why aren’t we boldly going?” the lecture will set out Thomas’s personal take on how America can re-invigorate the manned space program.

“Andy Thomas is the quintessential astronaut – calm, professional, inspiring and a brilliant speaker,” said Paul Davies, director of the Beyond Center. “I am thrilled we have managed to get him for the prestigious Shoemaker Lecture.”

On Friday, an all-day symposium, 10 a.m.-6 p.m., Oct. 26, Marston Theater, ISTB4 building, will provide an in-depth analysis of how the dream of human space exploration can be re-kindled. Featuring an all-star line-up of space travel stakeholders, including the noted science fiction writer Kim Stanley Robinson, the symposium is co-sponsored by the Beyond Center, the School of Earth and Space Exploration (SESE) and the new Center for Science and the Imagination.

Imagination will be much in evidence, as the symposium will begin with near-term goals, such as space travel privatization, and end with a sweeping vision of how futuristic breakthrough technologies mean we can still dream of reaching for the stars.

“Fasten your seat belts for a wild ride,” said Davies, who is also a Regents' Professor in the Department of Physics in ASU's College of Liberal Arts and Sciences.

Ethiopian-Italian author Gabriella Ghermandi will be speaking at ASU, Oct. 25 on the Tempe campus.

“Through my story you can see how history can pass through people’s lives,” says Ethiopian-Italian author Gabriella Ghermandi.

Ghermandi was born in Addis Ababa, Ethiopia in 1965 and moved to her father’s hometown of Bologna, Italy at the age of 14 after his death. Her writings, performances and life reflect the interwoven and distinct cultural and political histories of Ethiopia and Italy. Born of an Ethiopian mother and Italian father, Ghermandi and her family dealt with devastating Italian racial laws and discrimination. She began writing to deal with her loneliness and yearning for home, using the words as a way to gather histories and traditions of Ethiopia and share them with others in the Italian language. 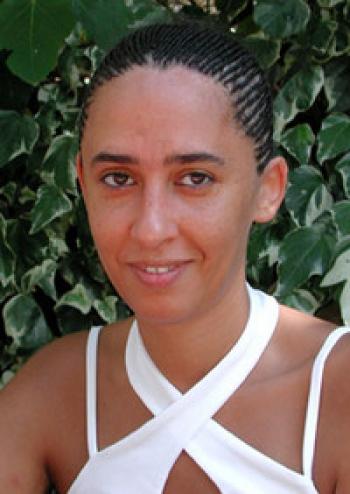 Eventually, she began writing short stories and doing oral performances professionally, capturing the personal experiences of Ethiopians, allowing them, for the first time, to tell their stories of incredible courage and sacrifice during Italian colonialism.

As a writer, Ghermandi has placed in the Eks & Tra Migrant Literature competition three times, winning first prize in 1999. Many of her works have been published in journals, magazines and collections. For the past few years she has served as art director of the world music and storytelling event Evocamondi Festival in Bentivoglio, Italy, and is one of the founders of the online literary journal “El Ghibli.”

Her debut novel “Queen of Flowers and Pearls,” which has won several prestigious prizes, presents a chain of stories within a story, offering a history “from below” of Italo-Ethiopian relations between 1935 and 2000.

Her visit is co-sponsored by the following College of Liberal Arts and Sciences units: School of International Letters and Cultures, Department of English, Insititute for Humanities Research, Women and Gender Studies and African and African-American Studies in the School of Social Transformation.