What does it mean to be an American? ASU project sparks conversation

Western women are independent, tenacious, come from strong pioneer stock and make great leaders. That was the consensus reached by Justice Sandra Day O’Connor and Girl Scouts USA CEO Anna Maria Chávez, who are considered by many historians as Arizona “firsts.”

The two women participated in “Women of the West,” which kicked off a three-year national discussion of “What it Means to be An American.” The event was hosted by the Smithsonian and Arizona State University’s Zócalo Public Square ideas project, a multiplatform, multimedia conversation that brings together thinkers, leaders, public figures and Americans from all walks of life to explore layered questions about how our nation’s past can help us understand its present and imagine its future. 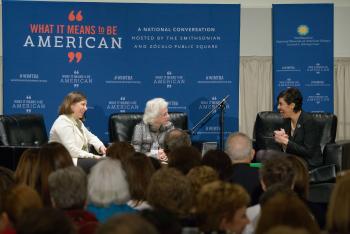 O’Connor and Chávez spoke in front of a standing-room-only crowd of about 200 people at Phoenix’s Heard Museum on Jan. 14. The two spoke with Sacramento Bee publisher Cheryl Dell, who served as a moderator, about their respective pasts, blazing paths as Arizona “firsts,” and what the future looks like for women in America.

While historically the West has been mostly associated with men, it has also been a place where women have flourished and taken the lead on suffrage issues, divorce statutes and the election of women to higher offices. While O’Connor and Chávez were born decades apart, they agreed that growing up in the West helped shape who they are and how they think.

“I cannot imagine having grown up any place else except the Southwest,” said the 84-year-old O’Connor, who grew up near Duncan, Arizona, on a cattle ranch called the Lazy B, close to the Arizona-New Mexico border. The ranch was homesteaded by her grandfather in 1880 and eventually passed along to her father, Harry Alfred Day.

Sensing limited educational opportunities for her daughter, O’Conner’s mother, Ada Mae Day, had the future U.S. Supreme Court Justice move in with her parents in El Paso, Texas. There, she attended the Radford School for Girls, a private school. It was at Radford where O’Connor was introduced to a powerful female role model: First Lady Eleanor Roosevelt.

“We all had to put on our best dresses and get up at the crack of dawn. She pulled up in this long, black limousine,” O’Connor said. “She was very gracious, but serious. She was wonderful actually, and I came away impressed.”

Chávez also grew up on a farm, but in Eloy, Arizona, sandwiched between two rough-and-tumble brothers. Through a friend she discovered the Girl Scouts and was introduced to strong female role models and environmental issues. At the age of 12, she decided she was going to become an attorney so she could change the world and protect it for others.

“Coming from rural Arizona, you have to make your own way,” Chávez said, who lives in New York, where Girl Scouts USA is headquartered. “When you’re raised on a farm, you are taught that no job is too small. Nothing is beneath you. We’re all equal.”

O’Connor and Chávez say they both strove for equality throughout their lives but found many roadblocks. Education, they say, lifted those roadblocks and paved the path. Both chose the law.

“Education was the thing that drove opportunity in those days,” O’Connor said, who graduated from Stanford Law School in 1952, but was rejected by more than 40 law firms before securing employment as a deputy county attorney in San Mateo, California.

O’Connor steadily rose through the ranks after serving terms as Arizona Assistant General; Arizona State Senate; Maricopa County Superior Court and the Arizona State Court of Appeals. In 1981 she was appointed by President Ronald Reagan to the U.S. Supreme Court, where she served until July 2005.

Chávez credits her parents, relatives, teachers and the Girl Scouts for giving her the confidence to do anything she wanted, and realized later on that others had been “blocking and tackling” for her to get her bachelor's degree from Yale University.

“Once I got to Yale, I started becoming the first ... the first of a lot of things, and realized my path was different,” Chávez said. “You say, ‘Okay, you’ve gotten this far so you’d better bring people with you.’ As people opened doors for me, I’ve been kicking down doors for others.”

It wasn’t just women who kicked down doors for O’Connor and Chávez. Both readily agreed that men played a vital role in their development, including their husbands.

“My husband had to move when I went off to Washington. I gave him a choice and he didn’t have to take it. But he’s a smart man,” O’Connor said, which drew gales of laughter. “Without their [male] support, I wouldn’t have gotten very far.”

Chávez said African-American men and women were especially helpful to her, who spent years pushing educational and work equality issues through the system. She said her first job out of law school was as legal counsel to the Federal Highway Administration in Washington, D.C., and later as an attorney adviser in the Office of the Counsel to the President under Bill Clinton. She returned to Arizona in 2003 to serve the first of two female governors as Deputy Chief of Staff for Urban Relations and Community Development under then-Gov. Janet Napolitano.

Both women say that while life has improved for women overall, there are still barriers and a strong need for female role models. Chávez said only 7 percent of all philanthropic endeavors go to girls' and womens' causes.

“Today people invest more in animal causes than they do in women,” Chávez said. “I love animals, I had a cat. I would venture to say that the first female U.S. President will be a Girl Scout. My concern is building a pipeline and investing in girls.”

Gov. Doug Ducey to give remarks at launch of new ASU center

Arizona Gov. Doug Ducey will visit Arizona State University's Tempe campus Jan. 22 to give opening remarks before a public lecture by Rich Lowry in celebration of the launch of the new Center for Political Thought and Leadership.

Gov. Doug Ducey to give remarks at launch of new ASU center

Titled "Abraham Lincoln and the American Idea," the public lecture is in celebration of the launch of the new Center for Political Thought and Leadership. 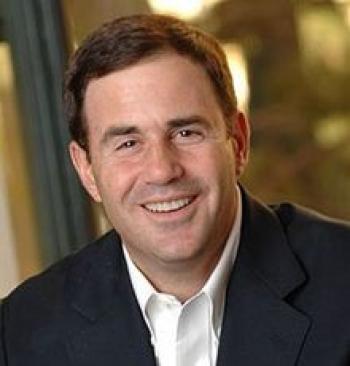 The event will also be live streamed at the following url:  http://www.ustream.tv/asutv

The Center for Political Thought and Leadership was approved by the Board of Regents last year to provide a forum for national and international scholarship and research in political thought at ASU.

"The center ... will provide research and training for the next generation of local and national leaders on the foundational principles of good government, civic involvement, free markets and political liberty," says founding director Donald Critchlow.

“Professor Critchlow is the ideal person to lead this new center forward, and his distinguished background in political thought and research will bring great perspective and value to the center at a time of continued political deadlock and precipitous decline in civic literacy in the United States,” said ASU President Michael M. Crow, who will introduce Gov. Ducey at the event.

Ducey was born in Toledo, Ohio. He moved to Arizona to attend ASU’s business school, where he earned his bachelor of science in finance in 1986.

After graduating from ASU, he began a career in sales and marketing with Procter & Gamble and went on to become partner and CEO of Cold Stone Creamery, which grew from a local shop to more than 1,400 locations in all 50 states and 10 countries.

Ducey is the 23rd governor of Arizona. He also served as the 32nd state treasurer. He lives in Phoenix with his wife Angela and their three sons Jack, Joe and Sam.