Visiting professor on a quest to 'green' Mongolia

Although Mongolia has a long and distinguished history, as an emerging democracy it is experiencing some growing pains that are impacting the country’s social-ecological systems as it moves from its pastoral and nomadic past into the 21st century.

Visiting Professor Chuluun Togtokh feels that better public policies are needed to make the transition to a democratic country a “greener” one.

Chuluun is housed in Arizona State University’s Center">http://csid.asu.edu/frontpage">Center for the Study of Institutional Diversity, where he will obtain a better understanding of how sustainability and land-use policies can help preserve and protect the country’s pastoral and urban social-ecological systems.

He is one of the few researchers in Mongolia studying institutional diversity. He came to ASU in September 2010 from the National University of Mongolia, where he is a professor.

“Being at the center will give me the opportunity to focus more on institutional perspectives and advance my research from science to policy. The center is perfect for me from the commons management perspective,” he said.

Chuluun is focusing on policies addressing Mongolia’s diverse ecological systems, such as forests, forest steppes, steppes, desert steppes and desert regions. He feels there should be different regulations in different ecological zones, which currently don’t exist in Mongolia.

He is also focusing on many other social-ecological issues Mongolia is facing as it transitions from its previous dependence on socialist Soviet Russia.

With each of these factors come numerous challenges.

“Ulaanbaatar is the capital city and is home to half of the country’s total population. There are huge air pollution and urban planning problems, and energy issues are very important as well,” said Chuluun, director of the Department of Environmental Policy and Science, the Mongolian Development Institute in the Office of the President of Mongolia. “The city is the second coldest capital city in the world, and heating demands in the city’s urban core continue to climb rapidly. We need to address this issue in a sustainable way.”

While at the center, Chuluun plans to continue his research on how to integrate climate change adaptation into sustainable development projects in Mongolia.

Designating Mongolia’s Gobi Desert region as both a world natural and cultural heritage site is another idea of Chuluun’s. The Gobi Desert covers much of the southern part of Mongolia and is the fifth largest desert in the world.

He wants to conserve the nomadic cultural resilience in the region, which he said is disappearing. “We have a great opportunity to conserve nature and culture in the Gobi; it has a globally significant agricultural heritage. I want to continue to bring new green technologies, such as renewable energy and wireless communication technology, to the region, and develop the area in a sustainable way.”

Chuluun will also continue to work on his proposal to add a “green” index to the United Nations Human Development Index, which measures a country’s well-being based on its gross domestic product per capita, health (life expectancy) and education.

The U.N. Human Development Index is considered by many to be an excellent tool for measuring human development, since both economic and social indicators are covered. Chuluun feels if a country’s carbon footprint is high then its human development index score should be lower.

Chuluun will be speaking at several events on the ASU campus in the coming weeks.

From 3:30-5:30 p.m., Oct. 18, he will present "D6: Vulnerability and Resilience under Global Warming in Asian Dryland Systems" at the Global Land Project’s Open Science Meeting in the Memorial Union Gold Room. At noon on Oct. 25, he will be the speaker at the Center for the Study of Institutional Diversity’s Brown Bag discussion; his presentation, "Vulnerability and Resilience of Pastoral Social-Ecological Systems in Mongolia," will be held in Matthews Hall. From 3:30-5 p.m., Oct. 28, he will speak at the Dynamical Discussion, in the Interdisciplinary Science and Technology Building 1, room 401. The discussions are organized by the Consortium">http://cbcs.asu.edu/">Consortium for Biosocial Complex Systems.

Chuluun will be at ASU for the next six months. During his visiting professorship, he will be writing a research paper emphasizing the importance of having different policies in different ecological zones. He also plans to work on his paper to designate the Gobi Desert as a world natural and cultural heritage site.

Liberal Arts and Sciences serves up hands-on fun at Homecoming

Robots and puppets, snakes and meteorites, 3-D math puzzles and elephant toothpaste await visitors in this year's College of Liberal Arts and Sciences area at the Homecoming Block Party.

Liberal Arts and Sciences serves up hands-on fun at Homecoming


Embracing the spirit of Halloween weekend and the theme “A Devilish Homecoming,” the college and its academic units are planning dozens of kid-friendly activities, including a toga contest, spooky ghost stories and a hands-on demonstration on the “science of slime.” 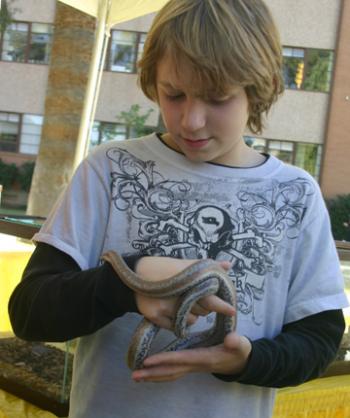 
“The college has hosted more than 2,500 guests in the past and we expect more this year since we’ll be in a new location in the center of the Block Party, on Old Main lawn, north of the fountain,” said Rebecca Albrecht, special events director for the college.


“We’re very excited to be in a new place. We have more space to showcase bits and pieces of the college labs and classrooms,” Albrecht said.


The Block Party is open to the public and scheduled to begin around 1:30 p.m., following the Homecoming parade at 12:30 p.m. Kickoff for the football game against the Washington State Cougars is set for 4 p.m.


The college’s area is packed with activities suited for families, students and Halloween lovers alike, Albrecht noted. “Guests can explore the sciences and learn to freeze bubbles with dry ice, make bouncy balls with a polymerization reaction, or see what a real witch’s brew looks like when it’s served up multi-colored,” she said. “Kids of all ages can watch fun animal shapes being made by a skilled glassblower, participate in a hands-on a demonstration on the ‘science of slime,’ or learn how to make their very own ‘elephant’s toothpaste.’”


The Halloween fun continues with students from the School of International Letters and Cultures hosting a toga contest, while the Department of English and the Virginia G. Piper Center for Creative Writing hold story time with spooky ghost stories. No costume is needed at the Melikian Center for Russian, Eurasian and East European Studies display, where visitors can have a picture taken wearing a hat from Tajikistan, or at the Office of Pre-Professional Advising area, where children can dress up in work uniforms belonging to individuals from a variety of professions.


All of the activities at the college’s Block Party are free, with food and beverages located in neighboring areas. The college’s new location also places it just a few steps from University Drive, where the Homecoming parade will travel west after making its way down McAllister Avenue.


Incorporated in this year’s Block Party is a 1980s twist that celebrates the 25th reunion of ASU’s class of 1985. The Block Party will feature 1980s-themed decorations, activities and giveaways in recognition of the 1985 graduates.


Albrecht promises the Block Party is an event not to be missed, saying that the various departments, schools, centers and institutes participating will be “pulling out all the stops to showcase the best of what we do.”