Secretary of Veterans Affairs Robert McDonald toured the Pat Tillman Veterans Center and met with a group of student veterans at Arizona State University's Tempe campus March 12 to gauge how well his agency was doing at improving service.

ASU has just over 3,720 student veterans, making up 5.2 percent of the student population. The secretary listened to firsthand accounts of the students’ varied experiences with the VA. 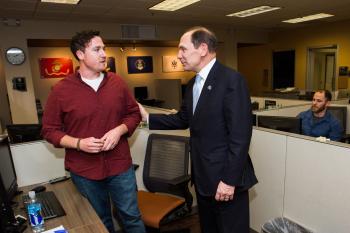 “We have work to do,” he said. “But we think we have the right plan and the right mission as we set the course for-long term improvements in the VA.”

McDonald is scheduled to join President Obama tomorrow in a visit to the Phoenix VA medical center to check on improvements there after shortcomings at that hospital launched a nationwide scrutiny of VA health care nearly a year ago.

He was nominated by President Obama to serve as the eighth Secretary of Veterans Affairs and was confirmed by the Senate on July 29, 2014. He was brought in to lead the organization following what he refers to as the “largest crisis in the history of the department.”

“We’ve got to earn trust one veteran at a time,” said McDonald, who is an Army veteran himself and a graduate of the U.S. Military Academy at West Point.

The VA has made strides in some areas, including patient care. VA medical facilities get higher customer satisfaction ratings than private sector counterparts but the problem is getting the access, said McDonald.

The ASU student veterans highlighted areas of improvement during the hour-long session with the secretary. But they also praised the support received from the VA.

“I have seen the difference,” said Shemmyla Green, an Army veteran and ASU legal studies graduate student. “And I appreciate the secretary coming here today to talk to us about their plans and demonstrate transparency.”

Green had problems with VA centers in other states but praised the VA in Arizona after they provided her with a much needed surgery.

Andy Mandwee, a Navy veteran and ASU undergraduate anthropology major, is also grateful of the support he has received from the VA.

“I’ve used the education benefits and I’ve had no problems,” he said.

The VA education benefits are among the most popular with veterans and one of the most impactful, said McDonald.

“Education is the greatest thing going,” said McDonald. “It is the most important benefit to transform your life and that of your family.”

The VA is the second largest federal government agency, with 340,000 employees and a current budget of $163.6 billion.

Prior to assuming his role as VA secretary, McDonald was chairman, president and chief executive officer of The Procter & Gamble Company.

The initiative includes a capital improvements fund to ensure that ASU Gammage meets the needs of today’s patrons, including plans for restroom expansion, accessibility improvements and a revamped sound system. 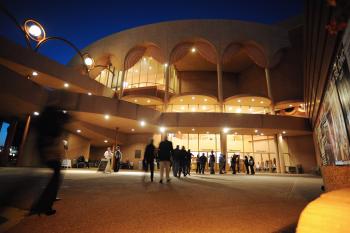 It also includes a programming endowment to support the mission of "Connecting Communities" to ensure ASU Gammage continues its programs in perpetuity.

During the silent phase of the campaign, ASU Gammage raised $1.2 million for the sound project to be realized in summer 2015.

“The acoustics in ASU Gammage are remarkable for unamplified sound, as the theater was designed when performers did not use microphones,” said Colleen Jennings-Roggensack, executive director of Gammage. “Today, however, amplified performances are the standard for all spectra of performing arts. Making sure every patron has an excellent sound experience at an event is of paramount importance, and our plan is to update current components and devices to achieve that.

“A complete overhaul of the sound system will occur this summer to help ASU Gammage improve audience experience and reclaim its crown as the 'queen of halls,’” Jennings-Roggensack added.

The Golden Gammage Initiative also calls for much-needed improvements that would add additional restroom facilities and increase the accessibility of the venue by adding elevators, allowing access to all levels.

According to Jennings-Roggensack, the project is expected to cost $9 million.

“ASU Gammage is making progress toward that goal with a $3 million lead gift from the The Kemper & Ethel Marley Foundation, as well as Arizona State University announcing a dollar-for-dollar matching investment of up to $2.5 million for the public phase of the campaign,” she said.

“The Kemper & Ethel Marley Foundation has a long history of supporting great charitable organizations for the people of Arizona, and their funding was a tremendous catalyst into moving us a step closer to preserving ASU Gammage for future generations," she added.

With completed funding, construction could begin as early as 2016.

Arizona State University will make a significant investment to ASU Gammage that continues to be a major access point into the university. In addition to the $2.5 million matching investment, ASU will provide funding to complete expenses on the sound project and replacement of the stage floor.

ASU is also committed to the multimillion dollar project of resurfacing ASU Gammage's unique rose-quartz-crete exterior to make the 50-year old building look as it did on its opening in 1964.

The initiative will create a programming endowment to bring the world’s best artists to the ASU Gammage stage and enable those artists to reach out to the community, create new work, engage audiences and create economic impact.

"Through the mission of Connecting Communities, ASU Gammage doesn’t just present the world’s best, but we make sure that people of all ages around the Valley and state get to experience working with and learning from these amazing artists through workshops, master classes and residencies,” said Mary Way, co-chair of the 50th Anniversary Leadership Board. “This programming endowment will allow these programs to continue and reach even more people in the coming years.”

ASU Gammage is also pleased to announce that in celebration of their long-standing partnerships, Ticketmaster and Broadway Across America are also making major investments into ASU Gammage’s infrastructure to support the Golden Gammage Initiative.

To help ASU Gammage achieve its goal for the Golden Gammage Initiative, or for more information, call 480-965-5062 or visit asugammage.com.