US Secretary of Education urges ASU grads to be change agents

In a spirited address to thousands of graduating students at Arizona State University's 2014 undergraduate commencement, which took place May 14 in Sun Devil Stadium, U.S. Secretary of Education Arne Duncan called for excellence in higher education through inclusion, instead of exclusion.

Duncan asked graduates to take their ASU education to heart, and combine equity, diversity and creativity with world-class research, innovation, entrepreneurship and community service. He also encouraged them to reflect upon their college experiences, friendships and education, and to pay it forward and be change agents. 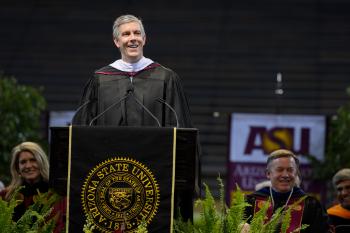 “You’ll look back and remember moments and traditions that were special," he said. "The education that you received will be part of you forever and will empower you to face challenges. As you leave here, strive to lead a life of consequence, in ways big and small.”

More than 12,000 ASU students have or are graduating May 12-16, many with degrees in two or more majors.

Earlier that evening, Secretary Duncan met with members of the current class of ASU’s President Barack Obama Scholars, a scholarship program that combines financial aid with mentorship to allow students from varied backgrounds transition smoothly to college. The program was launched in 2009 to coincide with President Obama’s visit to ASU.

In addition to the Arizona Board of Regents and ASU leadership, Duncan was joined on the stage by honorary degree recipients Freeman Hrabowski, III, president of the University of Maryland-Baltimore County, who has championed science and technology, as well as minority education; Nobel Prize-winning economist Joseph Stigltiz from Columbia University, who is one of the world’s top authorities on economics theories that include welfare economics, income and wealth distribution; and environmental science pioneer and MacArthur Fellowship winner Pamela Matson from Stanford University.

The evening began on a light note with Duncan holding up the "Pitchfork" and making a few jokes at the expense of ASU’s peer institutions. However, it soon turned introspective with Duncan asking graduates to ask themselves what they plan to do with the degree that they’ve worked so hard to earn.

Reflecting upon his own journey from playing basketball in college to becoming the CEO of Chicago Public Schools to, more recently, being named the U.S. Secretary of Education in 2009, Duncan stressed the importance of persistence, as well as of embracing responsibility and innate leadership abilities.

The address also lauded ASU’s redesign of traditional academic departments into interdisciplinary learning powerhouses, and its education values that instill adaptability, creativity and the drive that enables students to pursue their calling – all qualities that were emphasized by President Crow during the ceremony.

“As empowered learners and principal products of a New American University, ASU students can blend new concepts and experiences into ideas that drive progress and are much more impactful,” Crow said.

In the last decade, ASU has increased the number of degrees awarded by 60 percent, while seeing a simultaneous increase in the diversity of its graduates. More Native American and Hispanic students graduate from ASU than from any of the 62 research universities in the Association of American Universities. ASU is sixth among the 62 universities in graduating African-American students.

The impact of ASU students on regional and global communities also was noted by the nation’s top educator, who commended them for engaging in hundreds of thousands of hours of community service and egged them on to “dream it, do it” as per ASU’s mission.

“In the global economy, it is not just knowledge and ability to master a subject that determine your success, as important as they are,” Duncan said. “Your ability to be a lifelong learner will determine how you fare in the job market and in life.

“Chasing your dream is about so much more than finding a job or paying off your college debt, both of which, I know, are on many of your minds today," Duncan said. “But in the long term, you’ll know that you are pursuing your passion if it is what you would want to do every day, even if you weren’t getting a paycheck.”

Father and daughter Karl and Stephanie Lauk have graduated from ASU together with degrees in electrical engineering.

Karl Lauk recalls that at one time he had told his daughter Stephanie she might want to reconsider her plans to study electrical engineering in college.

He had been working in the semiconductor field for many years after earning an undergraduate degree in electronics engineering technology from the Oregon Institute of Technology in 1989. But as the economic recession hit several years ago, he was seeing business slow down in the electronics industries that had been keeping many electrical and electronics engineers employed. Karl had been thinking about retraining to earn qualifications for other types of jobs. At about that time, the medical device company he had worked with for 20 years outsourced his job.

So in 2010, a year after Stephanie began undergraduate studies at Arizona State University, Karl followed by enrolling at ASU to pursue a master’s degree.

Attracted by fun of engineering

Stephanie had decided not to heed her father’s warning. She chose to major in electrical engineering. Karl had decided that advanced education in the field was a surer path to a new job than starting over in another area.

Thus, the two Lauks were on the roster of students in the electrical engineering program in the School of Electrical, Computer and Energy Engineering, one of ASU’s Ira A. Fulton Schools of Engineering.

Stephanie’s interest in the field had been stoked when she and a fellow Gilbert High School robotics team member competed in SkillsUSA events – winning a statewide robotics competition one year and placing seventh and third in national competitions in consecutive years. She had cofounded the school’s robotics team and served as its vice president.

Stephanie found electrical engineering to be her kind of fun: something complex and challenging that tested her mental acuity and her willpower.

While still in high school she did a summer internship at Foresight Technologies, an engineering and manufacturing company based in Tempe.

Her impressive academic record and achievement test scores in high school earned her support for tuition at ASU through the Arizona Board of Regent’s High Honors Tuition Scholarship (called the AIMS Scholarship).

At ASU, she expanded her knowledge of robotics technology by contributing to a project to develop a miniature submarine for oceanographic and glacier studies in the Antarctic.

She gained expertise in communications technology and assisted in research exploring problems arising from the use of recycled electronic parts in new products.

One year she was one of only three ASU students accepted into the Korean University International Summer Campus, an academically intensive study-abroad program, where she studied the Korean language and game theory.

Karl had used his undergraduate engineering education to find fulfilling roles as a process and manufacturing engineer. He went back to school after two decades to build on those career experiences.

Among highlights of his ASU experience, he says, was getting to apply circuit principles he was learning in graduate courses directly to his work manufacturing electronic control devices used by law enforcement.

Once father and daughter were simultaneously ASU students, they soon found themselves spending more time together.

They carpooled to and from the family home in Gilbert to ASU’s Tempe campus and often ate lunch together. They shared experiences after long days going to classes, working on lab assignments and extracurricular projects, and doing research.

In the evenings, Stephanie would sometimes consult with her father when she needed help with a tough homework project.

The routine changed somewhat when at the end of 2010, as Karl was finishing a second semester of graduate studies, he was hired for a new job and had to continue studies on a part-time basis.

He took on a senior manufacturing engineer role for Scottsdale-based Taser International, an industry leader in personal safety technology.

For Karl, it was a payoff on the value of an advanced degree in engineering even before he had completed the program.

“When I interviewed for the job and was asked what I had been doing since leaving my previous job, I told them I was studying for a master’s degree at ASU,” he explains. ”I am certain that was a positive factor in the company’s considerations about hiring me.”

Had he been able to remain a full-time student, Karl would have been on track to complete the master’s degree program in two years, by 2012. But his progress was set back by more than just having to switch to taking classes part-time.

Karl, who had just turned 50, was preparing to take his final master’s of science in engineering exam in fall 2013 and graduate at the end of the semester, when his doctor discovered he had “a pretty serious heart murmur.”

He was soon undergoing heart valve repair surgery and a month-and-a-half -long recovery.

“I was really caught off-guard,” he says. “I had never been hospitalized for anything in my life up until then.”

The surgery was a success, and he was back in good health in time to complete his master’s degree final exam this semester.

The delays resulting from finding a new job and heart surgery, he says now, “did lead to a really cool thing, getting to graduate with my daughter. That has to be a rare event.”

She has been teaching English-as-a-second-language (ESL) courses in the Gilbert school district for more than 15 years, recently switching to teaching second-grade students.

In addition to what she learned in her education studies at ASU, Wendy had first-hand experience in understanding the needs of ESL students. English is Wendy’s second language. She immigrated to the United States from Korea when she was 14, and says she remembers how difficult it was to learn a new language and assimilate into a new culture.

The Lauks other daughter, Krystal, attended ASU as an art and English Literature major and now works as an art illustrator and designer for a California web-based advertising agency.

Daughter off to begin career

There will be little time after graduation ceremonies for the family to celebrate the father and daughter accomplishment. Only two days later Stephanie will move to Colorado to begin her first job as a professional engineer.

She will be a products testing engineer for a startup called Revolv. She’ll have a role in helping to refine the company’s new “universal smart home hub and app,” technology that enables users to connect and control all of a home’s automated devices and systems with a single app.

Stephanie says she intends to accumulate a significant number of years of industry experience before following in her father’s footsteps and returning to school to earn her own master’s degree.

She does, however, expect that she will best her father by achieving that goal much sooner than at age 51.