US Marine Corps prepared veteran for career in engineering

Growing up in a family of military men, R. J. Mitchell had one goal in mind: to be a warrior in service to his country. Two weeks before his 21st birthday, he proudly became a U.S. Marine.

During his four-year enlistment, Mitchell would be deployed twice to fight the war in Iraq. He was awarded the Navy Cross for his heroic actions during the Second Battle of Fallujah. The award is the second-highest military decoration for valor that may be awarded to a member of the U.S. Navy, U.S. Marine Corps or U.S. Coast Guard. 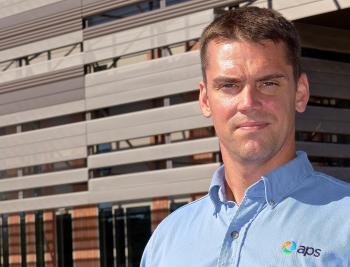 Mitchell recalled the instance, almost 10 years ago this November, that put him front and center in some of the heaviest urban combat U.S. Marines have been involved in since Vietnam.

“Some of our men were wounded and down inside a house. We went in to get out the injured, and got everyone out,” he said, then thought for a moment, “except one.”

Mitchell expected to spend his career as a marine. When asked how his journey took another path, he said, “I felt I used up most of my lives.”

When he left the service, Mitchell was a young husband in search of a profession. He struggled through high school and admitted that “the education scene” was not in his immediate plans, and he certainly couldn’t see himself in a “traditional” college.

Putting the G.I. Bill to use, he came to Arizona to attend the Motorcycle Mechanics Institute to learn to work on Harleys. The man who disliked school was hooked.

A friend and mentor tried to convince him to get a law degree, but Mitchell was more intrigued by figuring out how things work, mechanically, and he loved math and science. After attending Glendale Community College to study communications, he enrolled in ASU’s Ira A. Fulton Schools of Engineering, where he is studying to be a mechanical engineer.

A father of a nine-year-old son and five-year-old daughter, Mitchell holds down a job at APS when he is not in class. He said it is the perfect place for a mechanical engineer to work and explore.

“They have lots of big equipment, and it’s fascinating to learn about power generation, how to make it more sustainable, smarter and more efficient,” he said.

His experience at APS has complimented his classroom studies perfectly and has seeded one potential aspiration for Mitchell: to focus on how to make the generation process as efficient as the new devices that are hitting market.

Another ambition is influenced by a more personal experience. “One of my friends had his legs shot off in Fallujah. I’m interested in designing new prosthetics that could make his life, and other veterans’ lives, easier,” Mitchell said.

While some may think that military and college life are polar opposites, Mitchell said life as a soldier prepared him well for being an ASU student.

“School gives me a daily plan, a goal, and that has been a big help in the transition,” he said.

The Pat Tillman Center has been an anchor for helping Mitchell find a sense of place. When he first enrolled at ASU, it was just becoming operational. He was going to school and working full time, and decided to hang out at the center when he had a few hours between classes. He would eventually end up working there.

“It was awesome working with vets, helping with their benefits and all,” Mitchell said. “And things like Salute to Service week and all the support ASU gives its student veterans is great.”

A self-declared “super freshman,” he is forging a new path, embracing the challenges of being in what sometimes feels like a foreign environment – the classroom – while relishing the new knowledge his professors are teaching him. He knows that engineering is “hard,” but said, if he picked one thing the Marines taught him, it is this:

“There is a reward for hard work.”

An ASU synthetic biologist is working on techniques to make proteins that can reactivate one of the body’s natural defenses against cancer.

Karmella Haynes wants to help the body fight cancer by designing proteins to stop the disease.

Haynes, a synthetic biologist at Arizona State University, is leading research to explore the capability of genetically engineered proteins to reactivate tumor suppressors inside body cells to prevent the onset of cancer, or arrest its development. 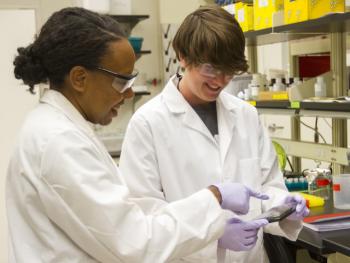 “We can make synthetic proteins and reprogram them to turn on natural tumor suppressors in cells that have been de-activated,” said Haynes, an assistant professor in the School of Biological and Health Systems Engineering, one of ASU’s Ira A. Fulton Schools of Engineering.

Cancer can set in when certain genes in the nucleus of cells lose their ability to restrain tumor development. That happens when chromatin – DNA and proteins that are folded together in chromosomes – becomes overactive. Cancer causes too many folding proteins to be produced – the tumor-restraining genes are folded too much, making these important genes lose their ability to function properly.

Supported by a grant from National Cancer Institute through the National Institutes of Health (NIH), she is working on a technique for effectively introducing the engineered proteins into chromatin structures.

The new proteins would be programmed to attach to genes in a manner that should restore the tumor-suppressing function “and start killing cancer cells,” she said.

Haynes will be aided by fellow ASU researchers.

Mark Spano, a research professor in the School of Biological and Health Systems Engineering, will do the computing work to develop the modeling Haynes will need to predict the behavior of cells in growing cell populations.

Joshua LaBaer, professor of chemistry and biochemistry and director of the Virginia G. Piper Center for Personalized Diagnostics at ASU’s Biodesign Institute, will provide expertise in proteomics, genomics and use of big data.

The NIH grant – providing $390,000 over three years – will also enable Haynes to work with a mentor from Harvard Medical School. She will be advised by Pamela Silver, a professor of systems biology and a globally recognized leader in synthetic biology.