Energy research at Arizona State University was the focus of a visit by U.S. Energy Secretary Steven Chu on May 15. Chu, who was in the Valley of the Sun to help launch the second phase of the Solar Phoenix program, stopped by the university’s Tempe campus to meet with ASU President Michael M. Crow, LightWorks director Gary Dirks and a number of scientists engaged in DOE funded research. 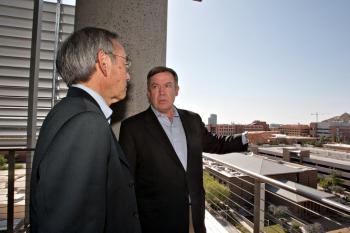 Chu, a distinguished scientist and co-winner of the Nobel Prize for Physics in 1997, has devoted his recent scientific career to the search for new solutions to energy challenges. Previously, Chu was the director of the Department of Energy's Lawrence Berkeley National Lab, where he led the lab in pursuit of alternative and renewable energy technologies. Chu, a member of the National Academy of Sciences as well as several other academies around the world, has a doctorate in physics from the University of California, Berkeley.

While at ASU he talked briefly about the mission of the Department of Energy, highlighting ARPA-E, energy and science as “touch points.” But Chu’s main purpose in coming to ASU was to listen.

In describing ASU as a New American University, Crow explained that “we have set ourselves apart from other major public universities by having a differentiated set of design aspirations. For instance, use-inspired scholarship, valuing entrepreneurship, merging disciplines, and fueling things in a different kind of way. It’s a different approach.”

Also speaking at the gathering that was held in ASU’s newest Interdisciplinary Science and Technology Building (ISTB4) was Dirks, the former president of BP Asia-Pacific and BP China. Dirks is director of LightWorks, an ASU initiative that capitalizes on the university’s strengths in solar energy and other light-inspired research, including the Arizona Center for Algae Technology and Innovation.

“We try to cover energy in an integrated way and the Department of Energy is an important supporter of ours,” said Dirks, who also is a distinguished sustainability scientist with the Global Institute of Sustainability, a strategic research unit of ASU’s Office of Knowledge Enterprise Development.

Honsberg leads a national Engineering Research Center at ASU that is supported jointly by the National Science Foundation and Department of Energy to solve challenges to harnessing solar power in economically viable and sustainable ways. Known as QESST – Quantum Energy and Sustainable Solar Technologies – the center focuses on identifying alternative energy sources that solar power can provide through photovoltaic technologies.

“The general approach of QESST is that photovoltaics can meet the terawatt challenge within the next decade or two, provided we have advances that sustain the growth. The central driving force is that there is absolutely fundamental new physics across the entire span of the different technologies,” said Honsberg.

Friesen leads a research team pursuing advances in battery technology and energy storage. Specifically, the research group is developing a new type of ultra-high-energy metal-air batteries that use advanced ionic liquids, and promise to provide low-cost, long-range power for all-electric and hybrid vehicles. In the long run, this advance could significantly reduce the need for the United States to import oil since more of the energy to power transportation could be drawn from the nation’s electrical grid.

The work being done by Friesen and his research team is an example of how ASU is “leveraging the government’s money and accelerating the movement of this technology,” according to Crow.

Among the other ASU faculty members attending the briefing included Willem Vermaas, a professor in ASU’s School of Life Sciences and the Center for Bioenergy and Photosynthesis. Vermaas’ research team is working on a form of photosynthetic bacteria, called cyanobacteria, which are modified to over-produce and secrete fatty acids for biofuel feed stocks using just sunlight, water and carbon dioxide as inputs.

Also in attendance was Devens Gust, a Regents’ Professor in chemistry and biochemistry who oversees an Energy Frontier Research Center. The ASU center, one of 46 EFRCs, is pursuing advanced scientific research on solar energy conversion based on the principles of photosynthesis, the process by which plants convert sunlight to energy.

“Sustainability and renewable energy, advanced materials, flexible systems, and an arrangement of other areas we are concentrated in. We have strengths in research overall,” said Crow.

Days and times of Super Regional to be posted on softball schedule page when available.

he Arizona State softball team (49-8) dropped Sunday's first NCAA Regional game to No. 25 Syracuse, 1-0.  The loss forced a deciding Game 7 in which the Sun Devils prevailed, shutting out the Orange, 4-0 to advance to the Super Regional round.

Arizona State will advance to the NCAA Super Regional, set to take place next weekend here in Tempe. Louisiana Lafayette sports a 52-4 record coming into the best-of-three series. Game times and days are TBD. Check back at the ASU softball schedule page, here, for upcoming information.

GAME TWO |  Arizona State 4, Syracuse 0
After an hour succeeding the first game of the Sunday bracket, Arizona State heated up its bats for its second faceoff of the afternoon. Dallas Escobedo came back with a vengeance to shut out the Orange, throwing eight strikeouts in the contest, bringing her total to 16 on the day. She is now 22-5 on the year. Syracuse pitcher Jenna Caira earned the loss and is 27-9 at the end of SU's season.

In the first, senior Katelyn Boyd led off with a double and after Alix Johnson reached on a walk, Annie Lockwood knocked both runners in with a double of her own to make it 2-0. A couple of fielding errors from the Orange proved costly, plating Haley Steele to put ASU up 3-0 after one frame.

Escobedo and Caira dove into another fierce combat after the hitting spree in the first, with 10 strikeouts combined between the two pitchers, and 15 strikeouts total in the game. Escobedo's dominance showed especially in the fourth, fighting back from a bases-loaded one-out inning to strike out the final two batters to tumultuous applause.

Steele stoked the flame in the bottom of the fourth, launching a leadoff solo homer past the left field wall to widen the lead to the final score of 4-0.  The homer marked her 10th of the season.

GAME ONE | Syracuse 1, Arizona State 0
Jenna Caira pitched a complete game shutout for the Orange (43-15) as she improved to 27-8 this year while ASU's Escobedo took the loss and fell to 21-5 on the season, at the time.

Like Saturday's matchup, Syracuse drew first blood in the first inning as Stephanie Watts lined the first ball she saw over the center field wall for a two-out solo shot to put the Orange up 1-0.  That homer proved to be all it would take for Syracuse as Caira took over from there.

Outside the homer, the teams were locked in a pitcher's duel for the rest of the game.  Escobedo fanned five of the first six batters she faced - the Watts homer the lone exception - and neither she nor Caira allowed a runner beyond second base through the remainder of the game.

The Sun Devils had their best opportunity in the fourth with runners on first and second.when Sam Parlich grounded a ball into the infield that looked like it would squeeze into the gap. But SU's Morgan Nandin made a diving grab that she scooped to Watts for the force out at second.

ASU put runners on first and second again with two outs in the fifth before Annie Lockwood grounded a ball to Caira for an out at first.

Escobedo struck out eight on the game and allowed just two hits and one walk for a gem of a game.  Caira struck out five and allowed just four hits while walking three over the course of the contest. The double-elimination format forced the seventh game of the Tempe Regional as Syracuse had lost to Arizona State on Saturday, 3-1.

UP NEXT:
The Devils move on to the second round of NCAA Championship play, hosting the Super Regional next weekend against Louisiana Lafayette. The three-game series will be played against the Ragin' Cajuns, in double elimination format. Days and times are TBD.