Untangling the human family tree one branch at a time

CT scans of fossil skulls may help researchers settle a classic puzzle about the evolution of Africa’s Australopithecus, a key ancestor of modern humans that died out some 1.4 million years ago. The debate has centered on facial features shared by a number of Australopithecus species, and in particular, two bony columns known as “anterior pillars” that extend up from the canine teeth and bracket the nasal opening.

The study, published in the Sept. 19 Proceedings of the National Academy of Sciences, shows that beneath the bony exterior of the Australopithecus face details of internal anatomy reveal that the highly specialized “robust” australopith species from southern and eastern Africa very likely shared a common ancestor after all. 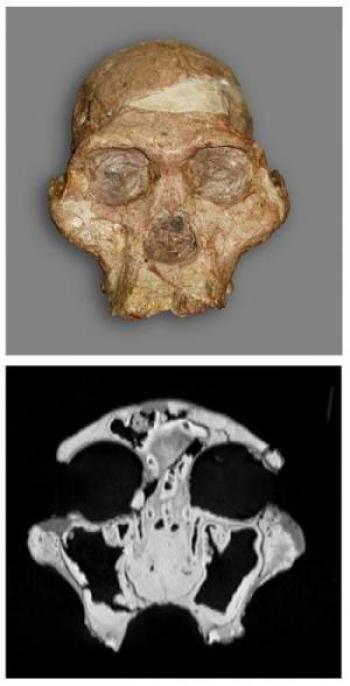 Brian Villmoare, a paleoanthropologist with George Washington University and University College London, became interested in this question as a doctoral student at ASU while working with professor William Kimbel of ASU’s Institute of Human Origins. Villmoare and Kimbel were looking at two “robust” species of Australopithecus – A. robustus from southern Africa and A. boisei from eastern Africa – that have unusual adaptations in their teeth and faces for powerful chewing. However, scientists have disagreed for half a century over whether or not the two species were closely related to one another.

These “robust” species – A. robustus and A. boisei – lived more than 1 million years from 2.3 million years ago to 1.4 million years ago, and were successful and plentiful during that time in east and south Africa. They were common but also unusual. In response to a changing environment that was drier and more arid at around 2 million years ago, adaptations evolved to process tough dietary items of grasses and shrubs, at least part-time, which is reflected in unusual physical features, including huge chewing teeth, large jaws to house those teeth, and wide, flaring cheekbones to support large chewing muscles.

From external visual analysis, researchers had determined that A. robustus shares features with another, older species from southern Africa, the so-called gracile form, A. africanus. The most obvious shared trait is the distinctive column of bone that runs along the sides of the nasal opening and extends down to the upper jaw. Some paleoanthropologists argued that this implied a direct ancestor-descendant relationship between the two southern African species.

Villmoare and Kimbel conducted a detailed study of CT scans of the faces of five early human species, which showed that while the South African species shared the anterior pillar, internally their pillars are structurally distinct. In A. robustus, the pillar is composed of dense spongy bone, whereas in A. africanus, the pillar is a hollow tube. Although an external pillar is not usually present in the eastern African A. boisei, this species shares the dense internal structure around the nasal opening with A. robustus. This means that the external pillar – the most important trait linking the south African species – may not be a genuine sign of common ancestry.

“These two ‘robust’ species either independently converged on the heavy chewing adaptation, or the south African species both converged on the anterior pillar, but either way, evolutionary convergence was clouding our ability to accurately reconstruct their relationships,” Villmoare said.

“Employing the relatively new technology of CT scans helped us to untangle the branches of the human family tree and solve this old evolutionary problem in a very strategic way,” Kimbel said.

According to Villmoare, determining the patterns of shared facial anatomy may finally resolve the issue of ancestry for A. africanus, A. robustus, and A. boisei.

“The detailed similarities in the internal anatomy of the face strongly supports the hypothesis that there was a single evolutionary branch of ‘robust australopithecines’ while the anterior pillar in the South African species, which are structurally quite distinct internally, may be part of a convergent adaptation to a similar dietary niche rather than an indication of shared ancestry.”

Homecoming weekend gets more exciting with addition of softball festivities.

Arizona State softball will hold its annual alumni game on Friday, Oct. 28, with festivities starting at 4:30 p.m. at Farrington Stadium.

Fans can relive the 2011 championship fun when the title-winning squad is honored at 7 p.m. in a ring ceremony on the field. The Sun Devil alumni will then take to the diamond followed by autographs and pictures with your favorite A-State softballers at the conclusion of the game! 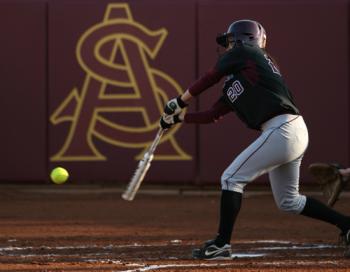