In what is the first-ever partnership between an American university and the Mexican Ministry of Public Education, 194 English teachers came to Arizona State University from Mexico for teacher training.

The Mexican government coordinates the program through COMEXUS, an organization  that sponsors educational exchanges between the United States and Mexico. This marks a continuing effort by ASU to expand its partnerships with Mexican institutions. 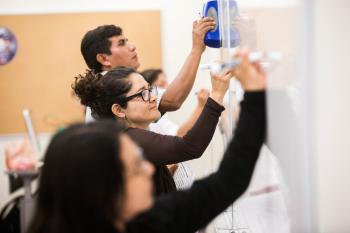 COMEXUS scholars Lazaro Romero Vazquez, Maria Angelica Leyva Acevedo and Sara Cortez Perez write ideas for lesson plans on the board before their presentation on "English as a second language" methods in the Mary Lou Fulton Teachers College on ASU's Tempe campus on Aug. 12. The COMEXUS program allows scholars to study from two to six weeks at U.S. universities. Download Full Image

The training program provides six weeks of instruction to participants. The teachers took two weeks of classes through ASU Online, then came to the Tempe campus for further instruction from the Mary Lou Fulton Teachers College and ASU’s Global Launch Initiative.

Program participants got to explore ASU and experience Arizona's culture. Participants listened to special guest lecturers from across campus to learn more about the university. They also had the chance to explore and visit the Phoenix Art Museum, the Heard Museum and the Grand Canyon, and to attend an Arizona Diamondbacks baseball game.

The Mexican government chose ASU and its Teachers College to administer the program because of the university’s commitment to quality and education.

“[ASU] recognizes the need for teachers to be globally aware and has the tools to help prepare them to succeed in the classroom,” said Shane Dixon, a senior international educator with Global Launch.

Teachers in the program take four courses during the six-week period. Topics covered include using technology in the classroom, teaching English to non-native speakers, effective models of learning and instruction, and techniques for teaching reading comprehension and analytical writing.

Lazaro Romero Vazquez, an English teacher from Chiapas with 16 years of classroom experience, believed that this program would provide the best opportunity for him to learn new skills that could be used in his classroom. He found the classes that helped teacher integrate technology into lessons to be most interesting.

“Helping students learn a foreign language is difficult, but technology will make it easier,” he said. “The tools we acquire here are going to be very useful and help me do a better job.”

With all of the ways that information is circulated, getting hurricane warnings to the right people at the right time can be a logistical nightmare. ASU researchers are using a complex adaptive systems approach aimed at preparing the nation for natural disasters.

The 2005 Atlantic Coast hurricane season was the most devastating to the region in recorded history, with Hurricane Katrina alone causing catastrophic damage. Despite sophisticated storm tracking and warning systems, the predictions on the season's storms missed the mark with tragic consequences — an estimated 3,913 deaths and more than $159 billion in property damage.

With all of the ways that information is circulated — TV, radio, social media, word of mouth — getting the right message to the right people at the right time can be a logistical nightmare. 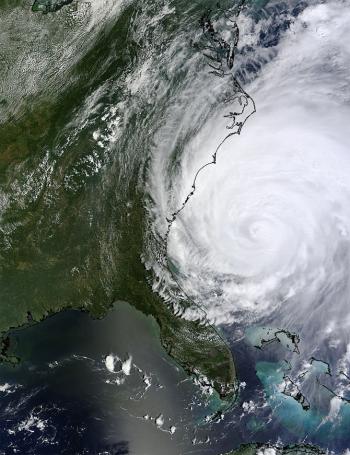 Each hurricane season brings varying levels of storms and destruction. The 2005 Atlantic Coast hurricane season was the most devastating to the region in recorded history, and in 2011 Hurricane Irene (pictured) was the 10th billion-dollar disaster to occur that year. Download Full Image

“What sounds like a relatively straightforward process — assess, predict, inform the public — is actually complicated by all the different ways information is spread and what the people choose to heed or ignore,” said complex adaptive systems modeler Michael Barton, an archaeologist in the College of Liberal Arts and Science’s School of Human Evolution and Social Change.

The way such information flows is beyond intuitive comprehension.

“But computational science provides us with powerful tools to model and simulate how people react to hurricane warnings,” he explained. “We also have the data of what actually happened in past storms that we can use to test and improve the models.”

As the lead ASU investigator, Barton is working on a project aimed at preparing the nation for natural disasters. The Communicating Hazard Information in the Modern Environment (CHIME) project, funded by the National Science Foundation, seeks to better understand how people respond to these types of warnings.

According to Josh Watts, another ASU archaeologist on the project, hurricanes are typically categorized based on wind speed, but much of the damage is caused by flooding from the storm surge.

Wind speed alone does not predict the storm surge, so a Category 3 hurricane can be a really windy day or a massive flood, depending on the way the tides, wind and landfall all come together, Watts said.

“We’re working on new models to both predict the storm surge and provide accurate warnings for evacuation planning,” he said.

The team, which is led by the National Center for Atmospheric Research and includes researchers from the University of Colorado at Boulder, is sifting through data that at first glance resembles a tangled ball of string.

“We are not just looking at the networks, but also the quality of the information and its impact,” Barton said. “What kinds of messages work for what kinds of people? Who relies on social media or looks to their neighbors? What roles do past or recent experience play? How do news agencies figure out which information to broadcast? You don’t want to cause massive panic every time there is a storm and have millions evacuating who are not in danger.

“It’s complicated, but not impossible to figure out using the kinds of complex adaptive systems models we are perfecting at ASU,” Barton said.

He laughed about scientists in the desert working on hurricane issues.

“It probably sounds strange that archaeologists from Arizona State University got a big grant to study hurricanes in Florida,” he admitted. “But the fact is, we have some of the best expertise in the country for modeling complex social behavior.”

Solutions The College of Liberal Arts and Sciences Research