Working in the laboratories of ASU senior faculty and scientists who are their mentors, each of the four will receive $7,500 a year for up to two years. Three of the students are only sophomores, an accomplishment that underscores the remarkable quality of their work. 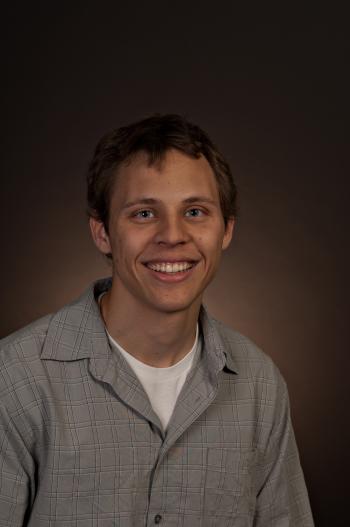 
Recipients are Tyler Libey, junior in bioengineering; Glenn Markov, sophomore in biological sciences; Michael Christiansen, sophomore in physics; and Edward Lee, sophomore in electrical engineering. Libey and Lee are in the Ira A. Fulton Schools of Engineering, and Markov and Christiansen are in the College of Liberal Arts and Sciences. All four also are enrolled in Barrett, the Honors College.


ASU students have won 47 Goldwater Scholarships in the last 17 years, placing ASU among the leading public universities. All four of ASU’s nominees were selected this year, repeating a sweep that occurred in 2006.


Libey, who was raised in Chandler by a single mother, is a dedicated student who is studying drug delivery in the treatment of brain cancer. He is using computer modeling to map out and determine how to introduce tumor-reducing drugs to key areas of the brain.


“Tyler is truly an exceptional student, the sort that only comes along once every few years, if that often,” said Michael R. Caplan, associate professor of bioengineering. “His intellectual abilities are exceptional, but his motivation, maturity, persistence and professionalism make him stand out from almost all others.”


Markov, whose parents immigrated from Russia, is working at the Biodesign Institute with the disease mutation team at the Center for Evolutionary Medicine and Informatics. Their goal is to advance personalized medicine through rapid and accurate diagnosis of pre-existing genetic health risks and conditions based on an individual’s DNA sequence.


“Glenn has already made substantial independent contributions to our teams,” said Sudhir Kumar, professor of life sciences and director of the center. “He also balances his research with teacher’s assistant duties, and he is well-rounded and well-respected, volunteering with schoolchildren and at a local hospital. He is highly deserving of this elite award.”


Lee, the son of immigrant parents from Korea, is a talented researcher who works alongside doctoral candidates in ASU’s Flexible Display Center, often taking the lead in programming. He is working on improving medical imaging for both health care and detection of radiological weapons.


“Ed Lee is one of the most talented undergraduate students I have come across in 18 years as a faculty member at ASU,” said David R. Allee, electrical engineering professor and research director for blackplane electronics at the center. “He’s an extraordinary student doing quality work, clearly the caliber of student you’d find at MIT. He’s a natural born scientist.”


Christiansen, who came to ASU in fall 2008 as a National Merit Scholar from Lakewood, Colo., showed early promise to become an outstanding scientist. Working hours each week in the physics lab of Professor Jeff Drucker, he is funded by ASU’s NASA Space Grant program to help build an ultrahigh vacuum chamber for experimenting on the growth of silicon and germanium nanowires.


“Michael is accomplishing tasks that I would consider exemplary for a beginning graduate student,” said Drucker. “Even at this early stage, he exhibits leadership through his interactions with other students in my research group. He has the intellectual curiosity necessary for advanced research, coupled with drive and determination. I’m certain he is on a trajectory toward a rewarding and successful research career.”


This year 278 Goldwater Scholars were selected on the basis of academic merit from a field of 1,111 mathematics, science, and engineering students nominated by the faculties of colleges and universities nationwide.

ASU Department of Biomedical Informatics professor Kanav Kahol will chair the 2nd International Ambient Systems Conference being held in Phoenix.  The conference is a forum on topics relating to human interactions with technology.

Other organizing and program committee members that are participating in this year’s conference are the leaders of their fields around the world.  The conference is hosted by the International Society for Computer Tomography, which works to improve the health care needs of the general public by supporting sciences and health care research.

“Last year the conference met for the first time in Quebec,” said Kahol.  “Most work with ambient systems is done outside the U.S.,” said Kahol, “but ASU is in a great position to be a part of it this year.”

Kahol participated in last year’s conference as a guest lecturer. “I did a workshop with haptic and ambient systems and because of the success of the workshop I was invited to be general chair for this year’s conference,” said Kahol.  Haptic technology is hardware and software which interfaces with the user through the sense of touch.

Paper submissions are accepted until May 31.  The conference meets on December 2-3, 2010.