Even though the construction of Arizona State University’s new law school is only halfway finished, it was reason for celebration.

The Sandra Day O’Connor College of Law and the Arizona Center for Law and Society held a "topping out" ceremony June 9 at its future location on ASU’s Downtown Phoenix campus. The ceremony commemorated the completion of the main structural work of the $129 million project and hinted at the future benefits of what the building will bring to the community. 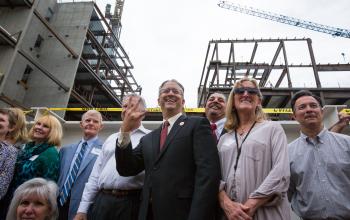 “I hope everyone here understands what an incredible achievement this building represents,” said Doug Sylvester, dean of the Sandra Day O’Connor College of Law. “It reflects the fact that you can’t do this alone and that you need community partners to achieve great things. This is an exciting moment for all of us.”

Among the community partners at the morning ceremony at First and Polk streets included Phoenix attorney Leo Beus and his wife, Annette, who made a $10 million contribution to the building’s capital campaign.

The Arizona Center for Law and Society is being funded by the city of Phoenix, which is providing land and $12 million in construction bonds. ASU Law has set a capital campaign goal of $50 million for construction of the building and has raised $40.6 million thus far.

Other dignitaries at the ceremony included Phoenix councilmembers Bill Gates, Kate Gallego and Jim Waring; William C. Canby Jr., a sitting judge on the U.S. Court of Appeals for the Ninth Circuit. Members of the W.P. Carey Foundation, which funded the Armstrong Great Hall in the new building, also were in attendance.

After a welcome address from Sylvester, the approximately 80 attendees spent close to 20 minutes signing the final beam hoisted into place – a 49-foot-long, four-ton metal beam placed by workers for DPR Construction, who oversaw the erection of the 280,0000-square-foot building. Attached to the beam were an American flag and a pine tree, traditional markers in topping-out ceremonies for steel constructed buildings, said DPR foreman Jim Walsh.

Councilman Waring said the law school is a “fantastic project” that fits in well for the downtown area.

“It’s a massive improvement from what stood here a few years ago,” Waring said. “Given that the law school had outgrown its Tempe location and that it’s now ideally located within proximity to the city’s legal district, I’m comfortable with the idea that we all made the right decision.”

“ASU and Phoenix will be able to host large national conferences and attract important scholars to the Valley,” Canby said. “It will benefit the local legal community greatly.”

The building will have 18 rooms where classes will be regularly scheduled, including one large lecture hall dedicated to university undergraduate education. Features of the law school include a high-tech courtroom and an active learning classroom.

In addition to the Sandra Day O’Connor College of Law and the retail space on the first floor consisting of the bookstore and a cafe, the Arizona Center for Law and Society will include space for two think tanks; multiple centers with cross-disciplinary focus, including the Lincoln Center; and the new ASU Alumni Law Group that will house the first teaching law firm associated with a law school.

Sylvester said the building’s location will bring about 1,000 new students to the Downtown Phoenix campus when it opens in August 2016.

Eric Newton, who was named the Cronkite School's new innovation chief last month, starts his new job this week where he will work closely with the school's leadership to drive cutting-edge ideas and initiatives at Cronkite News.

Eric Newton is noted for his pioneering projects in journalism education.

Newton, who will hold the faculty rank of professor of practice as the Walter Cronkite School of Journalism and Mass Communication’s innovation chief, recently started his new job at Arizona State University. He will work closely with the school’s leadership to drive new, cutting-edge ideas and initiatives at Cronkite News, the school’s daily-news operation. 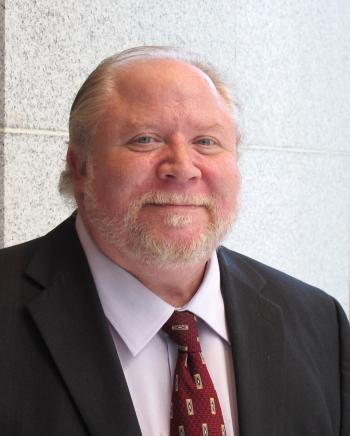 Known as a global leader in championing transformational digital innovation in the news media as an executive of the John S. and James L. Knight Foundation, Eric Newton was recently named the Cronkite School's innovation chief. Photo by: Walter Cronkite School of Journalism and Mass Communication Download Full Image

Known as a global leader in championing transformational digital innovation in the news media as an executive of the John S. and James L. Knight Foundation, Newton will lead innovation projects at Cronkite News, the news organization that includes 15 full-time faculty editors and hundreds of students.

Newton spoke to ASU News about his new responsibilities, the state of journalism today and where he sees Cronkite’s role in shaping the future of the industry.

Question: Can you define your new role as Cronkite’s “innovation chief”? What will your job responsibilities entail and areas of focus be?

Answer: That’s a harder question than you might think, because we’re talking about innovation, and the definition will change as we move ahead. In the beginning, I’ll learn as much as possible about how the school and university generate and incorporate new ideas. Then I’ll help provide a changing stream of ideas, projects and proposals from both inside and outside ASU. Then we’ll see what happens, make adjustments and keep going. The goal is for the Cronkite School to become the first fully developed “teaching hospital” for journalism education. Cronkite News already is an important news provider in a major market, but more than that, it wants to test a host of new journalism techniques and technologies. That’s an exciting vision, to help reinvent the discipline, and a necessary one, if we want journalism in this new century to provide the independent news and information people need to run their governments and their lives.

Q: Is the Cronkite School the first journalism school to use the teaching-hospital model, or is there another university that should receive credit?

A: The “teaching hospital” model is gaining in popularity. But journalism schools really don’t put the pieces of the hospital together under one “digital roof.” They too often create labs that aren’t connected to the reporting clinics where most of their students learn. Some universities are starting to incorporate new forms of reporting, storytelling, product design, revenue models and community engagement into their immersive learning experiences. But no school has made change truly routine. No school has combined connections to the entire university, constant innovation, open collaborative approaches and real community engagement. ASU could be the first. The Cronkite School rapidly has become a leading journalism school. The university has the right combination of dynamic people – President Crow and Dean Callahan, great professors and professionals, a fantastic group of students, Millennials who are consuming news differently from their elders. ASU has what this is going to take.

Q: Do you anticipate a lot of trial and error with this new position?

A: Yes. That happens whenever people create anything new. What’s interesting is that our daily lives are full of trial and error, though we don’t think about it that way. It’s fine for a journalist to get a story tip, check it out, find out it is false and then drop the story. That’s not failure; it’s a success. You kept a bad story out of the news. Good for you. “Trial and error,” per se, isn’t the challenge; it’s how workplaces define success. Through a contest I helped organize with a group of journalism funders, universities across the country are doing “teaching-hospital experiments.” There’s an overall prize for the experiment that works so well it changes how the school teaches. But there’s also an overall prize for the best report on an experiment, no matter what the result. If you learn and eventually do the right thing, that’s not trial and error. It’s trial, retrial and success.

Q: What is the state of journalism today, and how do you see it in five to 10 years?

A: The Digital Age has turned journalism upside down and inside out. Nearly everything is changing. Who a journalist can be, what a story is, when and where people consume news, how journalists and communities interact in today’s networked world. Though the “who, what, when, where and how” are changing, however, the “why” of journalism is not. We still need independent sources of news, people committed to fair, accurate, contextual search for truth.

Q: What will the future of journalism look like a decade from now?

A: I don’t know. For the first time in modern history, leaders of the news industry admit they don’t know. In a talk a few years ago at ASU, I guessed that the tech growth curve will bring us a rise in wearable media, sensors, Big Data, smart and virtual environments, a more global Internet, universal e-commerce technology and a leap forward in robotics. The last 10 years brought social media, broadband and mobile media with an unpredicted speed and intensity. Those technologies changed not just journalism but all communication. The Pew Research Center once said media is becoming more “personal, portable and participatory” – that’s also true for news.

Q: How will Arizona’s PBS station, which will be used as a learning lab for students, play into what you will be doing?

A: PBS is a great example of the challenge facing legacy media outlets. PBS still appears on lists of top news sites for Baby Boomers. It does not appear on any top-source sites for Millennials or Gen Xers. Those groups consume news differently. As a rule they don’t consume “appointment news.” They don’t sit down every day at 6 a.m. with a newspaper, at 6 p.m. with a newscast.  News finds them, day or night, through social media. So the challenge for PBS is how to keep an existing community happy while experimenting with new programming. When we think of PBS, we think of the main channel. But there are actually several signals in each market. So Cronkite has room to do all sorts of experiments and at the same time pursue traditional forms of journalism excellence (which it did, by the way, on June 3, when an ASU-produced segment appeared on PBS NewsHour.)  I’m not certain what the future of education will be, but I do think it will include helping students learn timeless truths in ever-changing digital environments.

Q: Journalism has received a lot of knocks in the past decade and is perceived as a dying industry. What are some positives about the "digital age" and the future of the profession?

A: Two big things are happening. First, America faces a crisis in local news. Our daily newspapers once had monopolies in their cities. They were flush with cash from print advertising. Now the world is digital, and more than half of that print ad revenue is gone. But the daily paper provides most of America’s local news reporting, so we need new sources of local news. But there’s another story: Digital news is booming. People in all industries need non-fiction storytellers. New digital news organizations are starting. Hundreds have been created on the local level. News entrepreneurs are valued. More universities and nonprofits are becoming news providers. Not since the dawn of the industrial age have we seen such potential for new ideas and ways of doing things. The marketplace won’t limit the journalists starting out today. We’ve freshly arrived in a new digital age of communication, and they can build whatever future of news they can imagine.